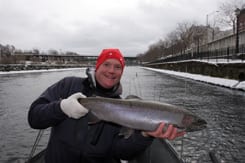 Owner of Catch The Drift Guide Service, Kevin Davis isn’t a wandering man. In fact, year round he guides within a few miles of his front door. A resident of Oswego, New York, a city 30-minutes north of Syracuse, Davis has excellent fisheries at his fingertips allowing him to stay close to home.

While Davis has spent time guiding the Salmon River and tributaries near Rochester, he’s always found himself doing best in Oswego. From late spring through summer, Davis charters offshore boats chasing browns, steelhead and salmon on Lake Ontario. However, as soon as the salmon begin to enter the Oswego River, Davis hops in his drift boat and logs time in swift water catch limits of king salmon daily. From November through March Davis remains on the Oswego casting towards browns, trout and steelhead.

Known as the Oswego expert, Davis is often featured in magazines such as Great Lakes Angler and Lake Ontario Outdoors.