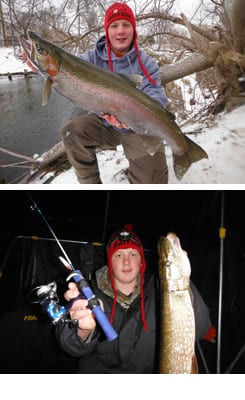 One of the country’s finest young anglers Kyle McClelland’s life revolves around fishing. While still in high school, the Northern Michigan angler has dedicated his teenage years to teaching anglers how to catch more salmon, steelhead, trout, walleye and pike. And, his success hasn’t gone unnoticed. Recently, McClelland has been featured in dozens of news features, most notably in Great Lakes Angler, OutdoorHub.com, Pure Michigan and Michigan Out Of Doors. His website, chromechasing.com and FaceBook have become bibles for Great Lakes area steelhead and salmon anglers, almost overnight.

McClelland’s targets change often. He spends the brutally cold winters chasing steelhead and brown trout on the Manistee, Betsie and Boardman Rivers, while also jigging through the ice for walleye and pike in various inland lakes.

Come spring, action revolves around steelhead. While he casts in dozens of smaller streams, the Manistee, Betsie, Platte, Boardman, Jordan, Boyne, Bear and Manistique Rivers yield the most action.

Throughout summer, McClelland’s attention shifts to the Great Lakes where salmon, trout are walleye occupy his time. However, some hours are spent tricking walleye in a handful of northern lakes. During the fall he migrates back to the same rivers he targets steelhead, this time vying for aggressive Chinook, Coho, browns and steelhead.