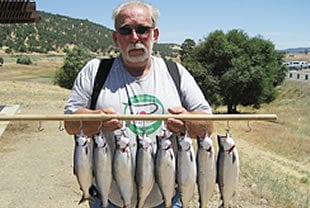 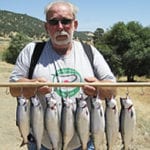 Through his guide business, seminars, and magazine articles Couch helped pioneer and popularize casting spinners for all species of salmon, pulling plugs for king salmon, and drifting bait under bobbers on the Little Susitna River. All three techniques have blossomed into highly productive methods frequently used by numerous guide services and private anglers for catching “Little Su” salmon.

Another feather in his cap, Couch became the first Little Su guide to run a quieter, cleaner and more fuel efficient 4-stroke outboard, which vastly increased the efficiency and comfort of Couch’s older boats, yet created a hodgepodge appearance. After deciding his guests would benefit from longer, wider, upgraded boats and unable to find ready-made boats with the features he wanted, Couch contracted with Gary Feaster, owner of Greatland Welding and Machine in Palmer, Alaska, to custom build two new boats. They were the first boats built by Greatland, but enhancements of comfort and functionality were obvious, price was great, and place of manufacture kept money circulating in the local economy. Ten years later, Greatland brand is the most used guide boat on the Little Susitna River and standard features from these boats are frequent custom additions to other brands used on the river.

Couch’s talents extend off the water, too. He has written articles for Alaska Magazine, Alaska Outdoors, the Frontiersman’s Mat-Su Visitor’s Guide and Fish Alaska magazine and often presents salmon fishing seminars at the Great Alaska Sportsman Show and Mat-Su Outdoorsman’s Show. In addition, he and his business, Fishtale River Guides, have been featured in Anchorage on Alaska radio, newspaper, and TV segments. Through his website, Couch provides daily summer fishing reports, supplies free Alaska trip planning resources and discusses quality gear used on his salmon charters. 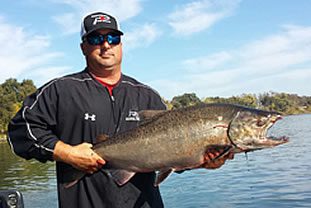 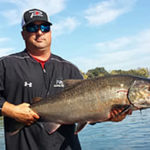 Based in Northern California, Troy Barr operates T-Roy’s Guide Service and is the guru of Lake Berryessa kokanee fishing. Barr concentrates on Berryessa from April through July where his boat often lands the largest kokanee in the state. When the kokanee bite peters out, Barr migrates to the Upper Delta and Sacramento River where he targets king salmon from September through November. In late November thru December he switches to Delta stripers.

No stranger to promotion Barr is often seen in Western Outdoor News, The Fish Sniffer and heard on California Sportsman radio show. He’s given seminars at the Sirs Group in Sacramento and Concord, the Elks Lodge in Sacramento and Auburn and Vacaville’s
Guns Fishing & Other Stuff.
For more information, visit www.fisht-roys.com 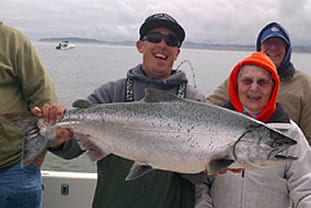 Gary BlasiPro Fisherman
Captain Gary Blasi has been the owner/operator of Full Throttle Sportfishing in Eureka, Ca., since 2004 and an avid fisherman since he could remember.
[ More Info…] 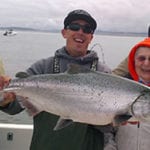 Captain Gary Blasi has been the owner/operator of Full Throttle Sportfishing in Eureka, Ca., since 2004 and an avid fisherman since he could remember. He also has experience chasing down the monster kings and halibut in Alaska. Blasi holds a United States Coast Guard 25-ton masters license and specializes in king salmon, Pacific halibut, rockfish and albacore.

Blasi takes pride in fishing out of Eureka and believes he lives in the best fishing community out of any port in the world. Blasi and his wife, Trudie, also own Mad River Bait Tackle and Guide Service in Arcata, the only strictly fishing tackle shop on the North Coast. They also make their own custom, hand poured swimbaits and saltwater grubs. The shop is located directly on the Mad river which is loaded with winter steelhead. 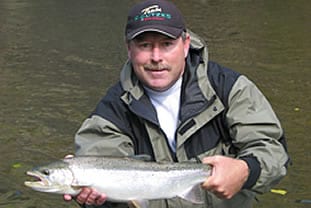 A full-time professional fishing guide since 1991 owner Mike Bogue has made a career running Mike Bogue’s Guide Service in Northern California. Named to Salmon & Steelhead Journal’s “Top 25 West Coast Guides” in fall of 2006 Bogue doesn’t spend time bouncing from system to system. Instead, he focuses on one river and has mastered it. 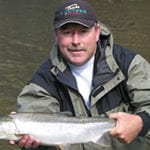 Bogue has fished with many of the best fishermen on the West Coast from the Kenai to the Sacramento and has seen his share of publicity. He’s been featured on America’s Outdoor Journal and Fishing with Scott Haugen is a frequent guest on the radio with Bob Simms in Sacramento and has been showcased in Fishing & Hunting News, California Sportsman, California Game and Fish, Western Outdoor News, The Fish Sniffer and the Stockton Record.

Alan BorgesPro Fisherman
Based in Northern California, Alan Borges runs Alan’s Guide Service and has been guiding on the California Coast, in the Upper Sacramento River Valley
[ More Info…]

Based in Northern California, Alan Borges runs Alan’s Guide Service and has been guiding on the California Coast, in the Upper Sacramento River Valley and Southern Oregon for more than 20 years. He specializes in salmon, trout and steelhead and approaches these fisheries in a jet and drift boat.

Borges focuses on 11 rivers, spread through five counties and two states. During the spring he pitches bait to Sacramento River wild rainbows and Lower Klamath River springers, before creating a base in Klamath Glen and drifting eggs on the Lower Klamath River for summer steelhead and fall salmon.

During the fall he also fishes the Trinity River for steelhead. By November, Borges begins to spend time on the Smith River where he chases world-class king salmon and winter steelhead. Late fall and early winter is also marked with salmon and steelhead trips to the Chetco, Elk and Sixes River in Oregon. During the heart of winter, Borges is able to remain closer to home where steelhead on the Van Duzen and Mad River are available.

A veteran guide, Borges is often featured in Salmon Trout Steelheader, Western Outdoor News, The Times Standard and 101 Things to Do in Humboldt County.

Close
FREE GIFT WITH $50 PURCHASE Choose from a special selection of beanies, hats and visors. This is a limited time offer, quantities are limited so act now! Choose your Free Gift at checkout