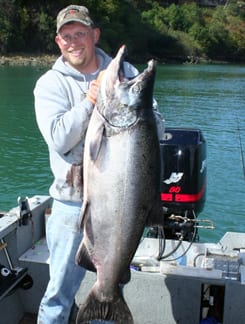 Always on the hunt for big fish, professional guide Andy Martin makes it a habit to be on the scene of some of the West’s best salmon, steelhead and saltwater fisheries. Martin operates Wild Rivers Fishing, a jet boat and drift boat guide service in Southern Oregon and Northern California. He also captains charter boats in Alaska, pursuing trophy halibut and salmon.
A well-known outdoor writer, Martin regularly contributes to regional and national magazines, including Salmon Trout Steelheader, Saltwater Sportsman, Fish Alaska, Game &amp; Fish, Northwest Sportsman, California Sportsman, Western Outdoor News and Oregon Hunter and is frequently featured in these magazines as well. Martin is a member of the International Game Fish Association, Coastal Conservation Association (CCA) and Oregon South Coast Fishermen. Martin’s seminars are popular at several Oregon sportsman shows and at Sportsman’s Warehouse in Medford.
In Alaska, Martin, who holds a U.S. Coast Guard 100-ton near coastal master’s license, helps customers catch some of the biggest halibut on the planet caught on sport fishing gear. He helped develop Pautzke’s Halibut Nectar and has spearheaded public education on the product. Martin also spends time guiding on the world-famous Kenai River for trophy salmon, and has developed a reputation for catching some of the biggest salmon back on his home waters in Oregon. Whether in Oregon, California or Alaska, Martin’s clients get to use some of the best baits on the river. He credit’s Pautzke’s cures and scents with his success during salmon, steelhead and halibut seasons.
In 2009, one of Martin’s customers landed a salmon in the upper 60-pound range on the Chetco River, caught on an anchovy marinated in Pautzke’s yellow Nectar. The salmon is thought to be the biggest Chinook caught outside of Alaska and British Columbia that year. In the fall, Martin spends his time targeting king salmon on the Smith and Chetco Rivers and does the same for steelhead in the winter. He also performs brief stints on the Rogue, Elk and Sixes in Oregon and on California’s Klamath River. When conditions permit, Martin focuses on salmon species and bottom fishing in coastal waters near Brookings, Oregon.
For more information, visit www.wildriversfishing.com
Learn More