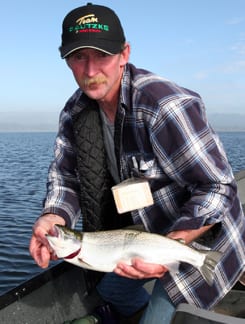 Owner of Lunker Fish Trips and Lunker Fish Trips Bait and Tackle on the Smith River, Mick Thomas is one of California’s most successful salmon and steelhead guides. He’s one of the state’s longest lasting guides and knows the Smith River as well as anyone on the planet. Whether on a fly, dragging a plug or bouncing roe, Thomas is in constant pursuit of anadramous fish and the California state record steelhead, which will almost certainly be caught on the Smith and likely from his drift boat. Landing 20-25 pound steelhead is an annual event for Thomas’ clients.
Thomas begins the year chasing those state record steelhead on the Smith River and sometimes bouncing into Southern Oregon to target steelies on the Chetco River from the first of the year through March. In April, Thomas switches gears and casts spinners at Lake Earl’s monster sea-run cutthroat. From May through August, he fishes the Lower Klamath River in search of the famed springers, prior to returning from July through September to approach the Klamath’s summer steelhead and fall salmon. As the Klamath dies down, Thomas returns north to cash in on the massive fall salmon that burst into the Smith.
While Thomas isn’t big on public appearances he’s been a regular in print media. From ESPN.com Outdoors to the LA Daily News, the Irishman has also been seen in Fishing &amp; Hunting News, The Fish Sniffer, Western Outdoor News, California Sportsman and Game &amp; Fish magazine.
To learn more about Thomas please call (707) 954-0352
For more information, visit www.lunkerfishtrips.com
Learn More