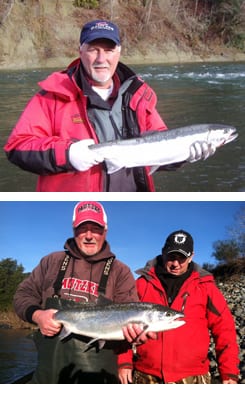 Growing up in Oregon, Pat Abel quickly learned he had a gift for catching salmon and steelhead and dedicated his life to helping anglers catch more fish. Today, Abel owns and operates Pat Abel’s Guide Service and constantly pursues steelhead, salmon and sturgeon.

While many Pacific Northwest guides migrate to Alaska to guide during the summer, Abel made it a personal goal to pursue fisheries close to home. In doing so, Abel’s shown his clients that a trip to Alaska isn’t necessary to find world-class fishing. His proof is found in the Columbia River Estuary where Abel commences his summer trips in search of incredible sturgeon fishing. When Coho begin to stage within a mile of the Oregon Coast, Abel trades in his sturgeon gear for salmon rods and targets a silver fishery that rivals that in Alaska. As Coho peter out in late August, Abel skirts over to Tillamook Bay and other North Coast rivers to key in on fall salmon.

Come winter, Abel’s time is focused on steelhead. While he targets a number of fisheries the bulk of his baits are cast toward steelhead on Oregon’s North Coast. When the steelhead bite expires, Abel switches gears and targets springers in the Columbia and Willamette River.

Between guided trips, Abel takes the time to put on free seminars at Fisherman’s Marine and local fishing clubs. And, his time on the water has earned him notches in Northwest Sportsman, Salmon & Steelhead Journal, Salmon Trout Steelheader and the Oregonian.

Prior to guiding full-time, Abel made a splash in the fishing industry with the miter box (The Master Plug Cutter). Abel designed the miter box to achieve the exact spin needed on a herring to increase catch rates. And, while the rest of the industry attempted to build their own herring miter boxes, Abel remained a step ahead by redesigning yet another miter box that allows the herring spin counterclockwise (opposite the standard clockwise roll). Meanwhile, Abel became known as a “Herring Guru” in Oregon’s estuaries and rivers. He even relocated to the coast to be closer to famed, Tillamook Bay, where he could spend more time keeping proficient in his art of trolling herring for the largest fall Chinook in Oregon.