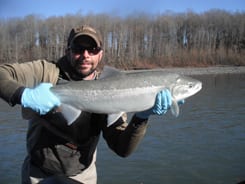 Voted one of the top 25 guides on the West Coast by Salmon & Steelhead Journal, Toby Wyatt was the youngest member on that list and also one of the most diverse guides in the region. After deck handing for his father, Snake River Jake, one of the most famous guides of all time in the region, Wyatt became a guide at 18 in 1991 and has been doing so full time under his guide service, Reel Time Fishing, since 2000. He’s since pioneered several new techniques and discovered dozens of new holes in the region.

Wyatt spends his days chasing an array of species along the Idaho and Washington border. Wyatt is licensed in Washington, Idaho and Oregon and holds a masters Coast Guard license. While most of his time is spent on the Clearwater in Idaho, Wyatt also fishes the Snake, Columbia and the Grande Ronde. In January and February, he targets the famous B-Run Steelhead on the Snake and Clearwater, prior to chasing springers on the Columbia in April. From May through June, Wyatt switches to smallmouth bass, springers and sturgeon on the Clearwater, Snake and Grande Ronde.

As summer settles in sturgeon and smallies become Wyatt’s focus and he’ll position himself on the Snake and Grande Rhonde in July to do so. From late summer through fall, Wyatt cones in on salmon, beginning with Buoy 10 in August, the famed Hanford Reach in September, Clearwater in October and Snake in November. Come December he’ll return to steelhead on the Clearwater and Snake.