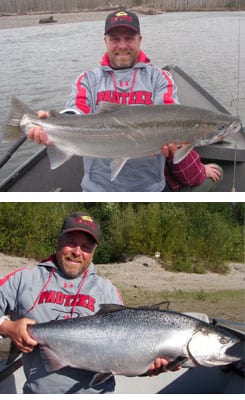 Born and Raised in the Pacific Northwest, Bob Kratzer has spent his life teaching fishermen how to become better anglers. Kratzer owns and operates two separate fishing companies, Alaska Kingfishers in Dillingham, Alaska, on the famed Nushagak River and Anglers Guide Service in Washington State. Kratzer is proud to have designed the river’s premier tent camp and also has guided the river longer than any other outfitters, a whopping 27 years. In the Lower 48, Anglers Guide Service runs up to four boats a day, making it one of the largest guide services in the state. Well respected, Kratzer is known for his innovative techniques and angler education.
In addition to being one of the busiest guides on the West Coast, Kratzer’s success has landed his name in Salmon, Trout &amp; Steelheader, Fishing Northwest, Salmon &amp; Steelhead Journal, Northwest Sportsman and In-Fisherman. He also has filmed several televisions shows for Cabelas Outdoor Journal, Sportsman Showcase, Walker Cay Chronicles and Fish’n Holes. Kratzer is also featured in several books by Dave Veddar on Float Fishing and also in Salmon and Steelhead Techniques by Robert Crandall. Meanwhile, Kratzer’s favorite thing to do is teach – and there is no better way to do this then to give seminars on specific techniques. Therefore, it’s not uncommon for Kratzer to perform a dozen seminars annually, typically for organizations like Steelhead University, Puget Sound Anglers, Green River Anglers and for the Northwest Sportsman Shows.
When Kratzer isn’t giving seminars you’re likely to find him teaching anglers from one of his three boats somewhere in Washington or Alaska. He spends most of his time in Washington on the famed waters of the Olympic Peninsula chasing huge winter steelhead. On the other hand, in the spring you might find him fishing the mighty Columbia or Lewis Rivers for spring Chinook. In the early summer he chase big kings on the Nushagak in Alaska prior to returning home to target summer steelhead, fall kings and silvers on the Cowlitz River.
For more information, visit www.anglersguideservice.com
Learn More