Conditions are prime for ice fishing in Colorado’s Rocky Mountains. And, after filming Pautzke Outdoors on Stagecoach Reservoir this week it’s safe to say we are in for another excellent season on the hardwater. We were fortunate to team up with Yampa Valley Anglers to film two episodes that will be released shortly and caught dozens of rainbows up to three pounds.

The bite came in spurts. Meanwhile, the two-day pattern proved early morning wasn’t prime time. Action was slow prior to mid morning and progressively improved as the day dragged on. We found the most action to arrive from 2-to-4 pm, and again right at dusk. While bites were sporadic during the morning, and at midday, action was constant in the afternoon. This could change any day, but was our experience on Monday and Tuesday. 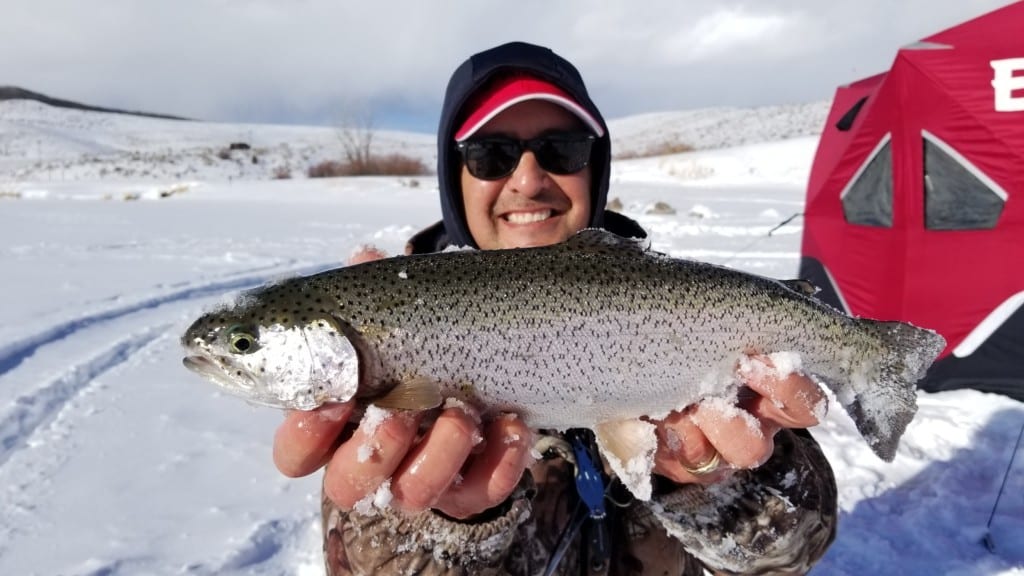 This was our first time filming Pautzke Outdoors on Stagecoach – and we would come back. Yampa Valley Anglers brought us to a few of their favorite spots on this popular reservoir near Steamboat Springs, and some fished better than others. There were eight to 10 inches of ice depending on what side of the lake we were on. Traffic was light, but we did fish during the week.

Fortunately, the action was steady during those afternoon hours. We caught trout in two classes: 10-inchers and those from 2-3 pounds. While we lost count we caught several dozen trout in various sizes each day. We released all, but one, which was destined for the grill. 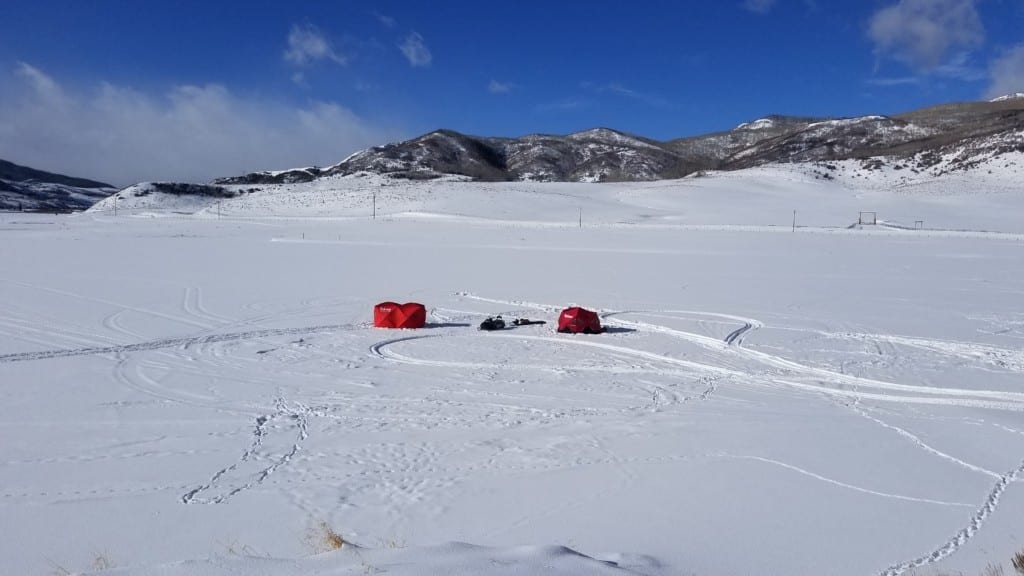 All of the trout we caught came jigging and dead sticking. We set up two rods on the Jaw Jacker and it did get hit often. Our best success came in eight to 10 feet of water. When dead sticking we used 1/32 once VMC Glow Series ice jigs tipped with Chartreuse Garlic Fire Balls and Chartreuse Fire Corn. We also coated the jig with Garlic UV Super Scent. Scent played a big factor and they guys at Yampa Valley Anglers will tell you how important using scent was. Bites came more frequently on the jigs that were scented. 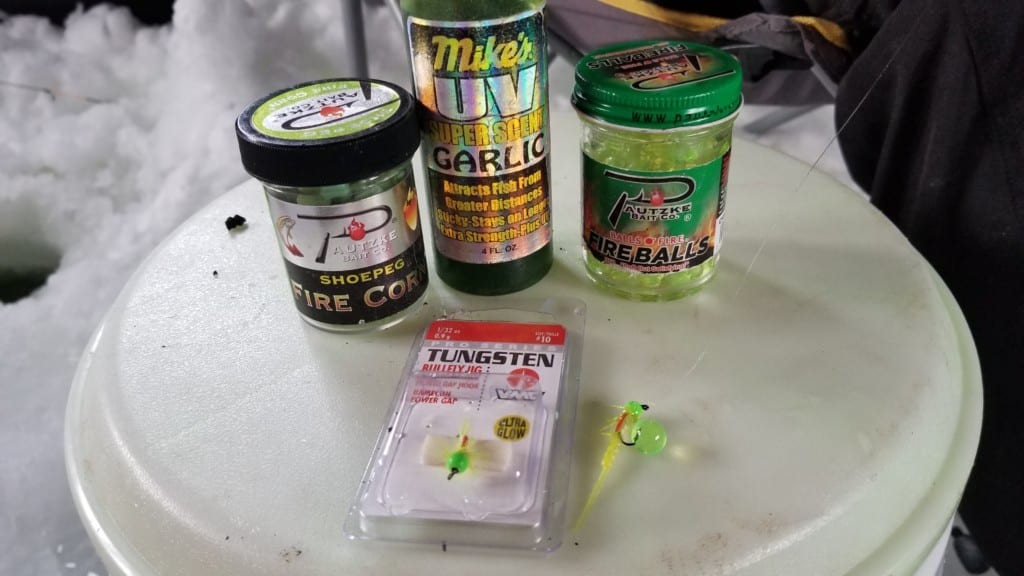 While it was windy and cold we spend most of our time jigging outside. We used two different rigs. Our friends from Yampa Valley Anglers were focused on using pieces of night crawlers tipped with a Pink Shrimp Fire Ball and heavily coated with Atlas Mike’s Garlic Glo Scent. We, however, didn’t use worms. Instead, we caught dozens of trout on two rigs: small jigs tipped with Gold Garlic and Pink Shrimp Fire Balls. Scent was a big part for us as well. In addition to the scented Fire Ball we added Shrimp Lunker Lotion to the jigs paired with Pink Shrimp Fire Balls and Garlic Lunker Lotion on the jigs with Gold Garlic Fire Balls pierced on them. 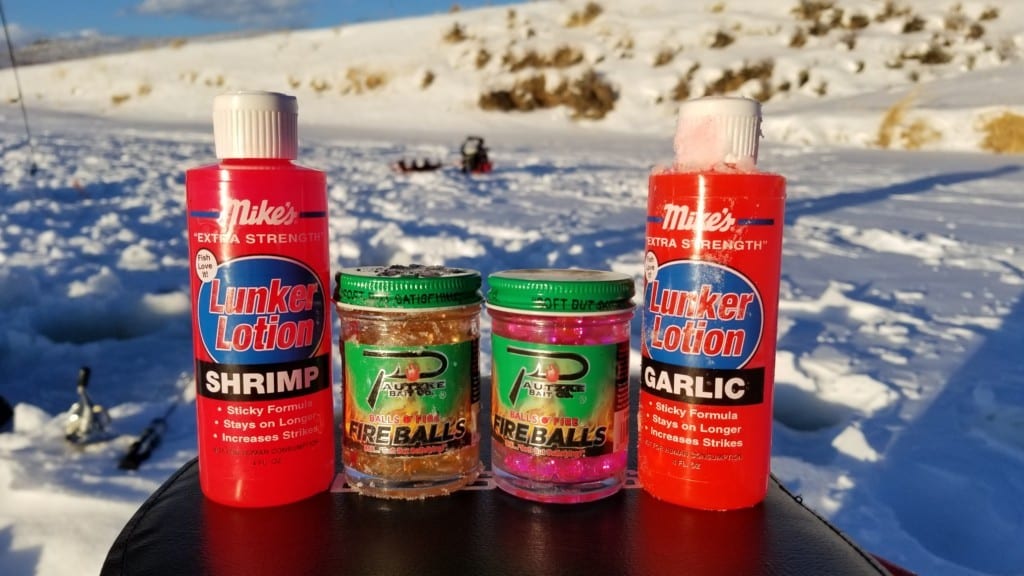 As you guessed scent played a vital role in our success. Action was slow when fishing an unscented jig with only a worm. Meanwhile, when the Fire Balls and Atlas Mike’s scents were added action improved.