While ice fishing has been practiced in Canada for decades, it’s relatively unknown in British Columbia, particularly the southwest. In recent years, the popularity of this winter recreational fishery has grown due to the development of new fishing opportunities by the Freshwater Fisheries Society of BC. More anglers are venturing on the ice between December and March.

There are two main target species in Southern BC’s ice fishery – rainbow trout and brook char. Both species are stocked by the Freshwater Fisheries Society of BC, and there are dozens of lakes to choose from between Vancouver and Kamloops. Released as fry, or yearlings, these stocked trout and char have the ability to grow up to several pounds due to the high abundance of food in these lakes. The average size is between 14-18 inches, which are perfect for the pan fry. 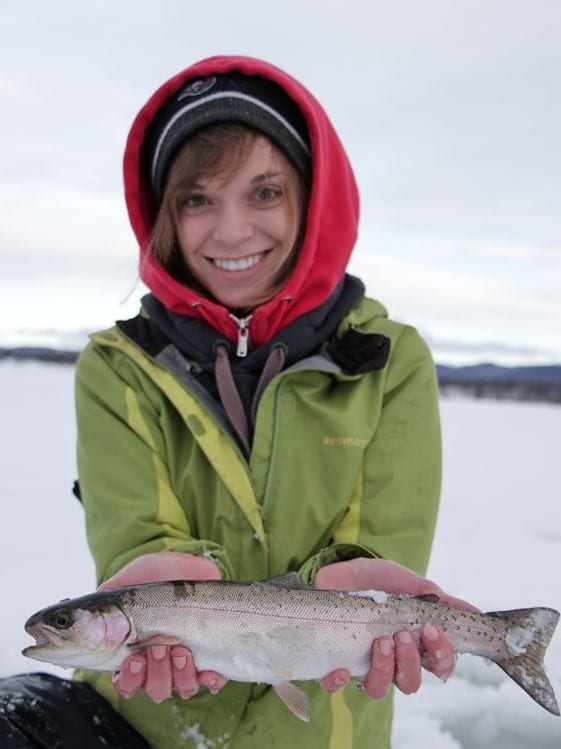 Fishing is generally productive at the beginning of the season, throughout December. As the season goes on, some lakes may not produce as well as oxygen level decreases, while other lakes can be good until early March. Just like other fisheries, timing of the day can also be critical. First and last lights are more productive, schools of fish can move in and out of your holes throughout the day, so a little patience and persistence can lead to good results.

There is a variety of bait that works for trout and char. My two go-to baits are deli shrimp, which have been cured with Red Fire Cure. This hardens the shrimp so it can stay on the hook longer, as well as provides extra scent, which can draw in fish more easily. Chartreuse Fire Bait is my other choice. Chartreuse stands out better in darker water, which is not uncommon if ice is thick. The unique scent Fire Bait produces is also irresistible, especially for brook char. Too often fish can be seen swiping on these baits as soon as they are dropped down. 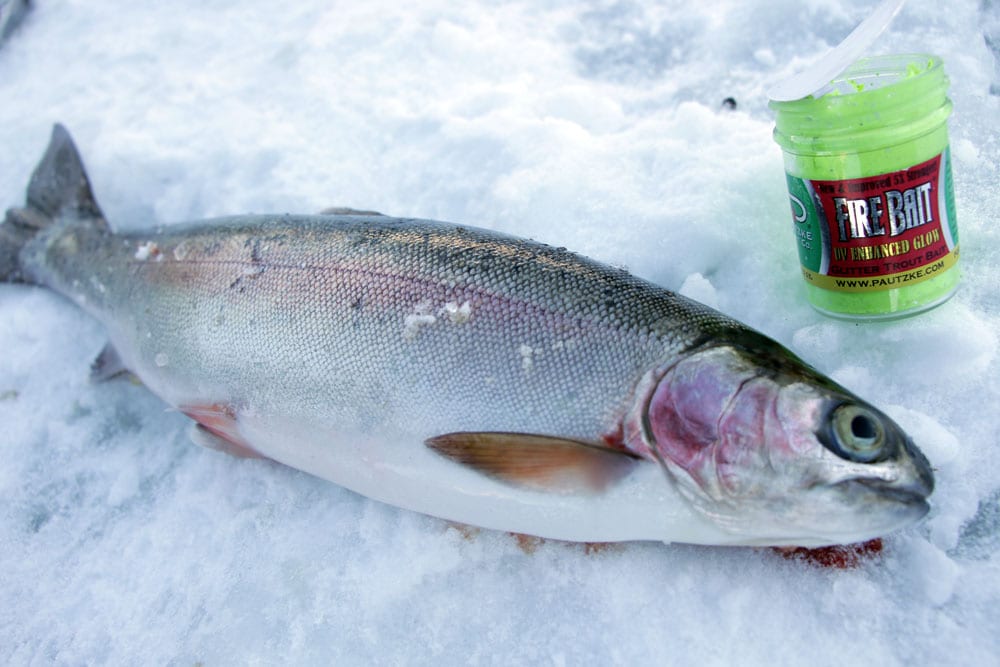 The terminal setup is quite simple. I use a 1/16oz or 1/32oz jighead tied directly to the main line. Because most fishing is done in shallow waters (4 to 6 feet deep), no additional weights are needed to bring your bait down. These jigheads come with a small hook, usually size 8 or smaller, so you can keep your presentation small. Trout and char are delicate biters in the winter months, so small presentations and a sensitive rod and reel set up are needed. For the main line, fluorocarbon up to 6lb test is my preference. 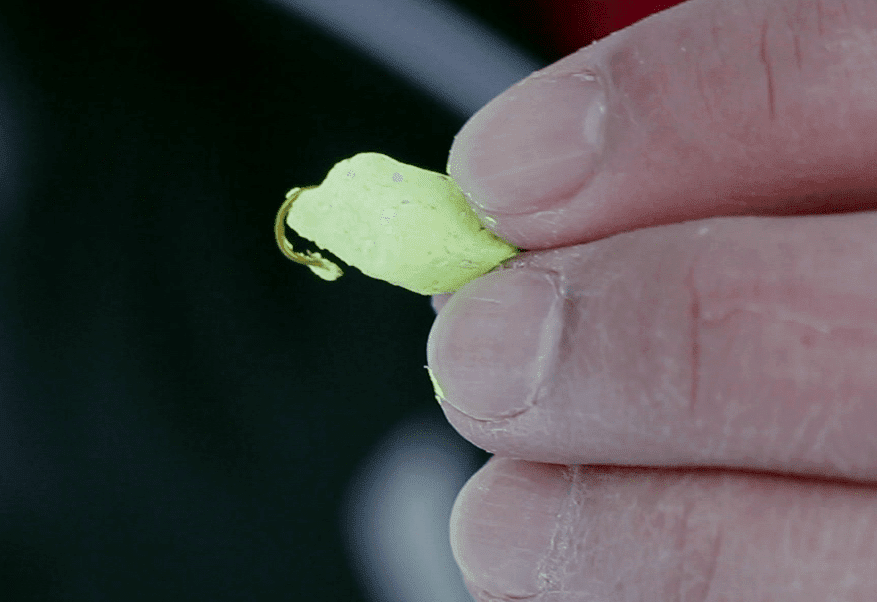 Recently, we visited Edith Lake just outside of Kamloops and were rewarded with rainbow trout and brook char by using the above methods. We set up in six feet of water, where brook char were schooling in the morning. By the afternoon, brook char disappeared and schools of rainbow trout took over. In total, we were able to hook into two dozen fish. 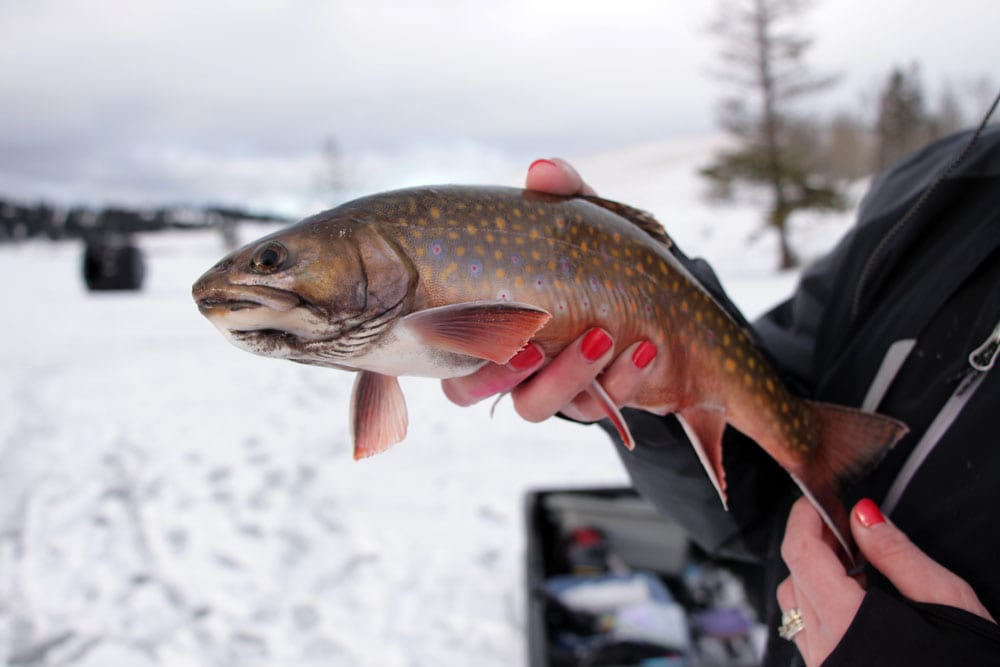 Besides bringing your ice fishing essentials, you should consider these items that may make your ice fishing experience more enjoyable. Proper clothing and footwear are important to have because there’s nothing worse than being wet in the cold. Not only does a tent can keep you warm, but it also provides complete shading so you can see all the actions in the water clearly. A propane heater in the tent also makes life much easier. Finally, you should bring plenty of food and warm drinks. 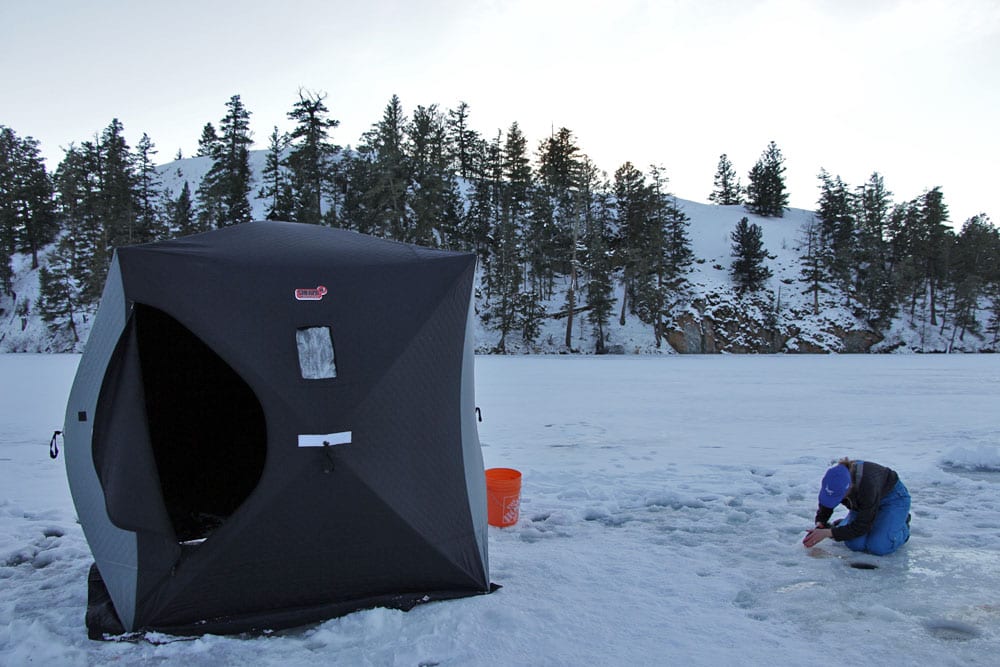 Ice fishing is the perfect activity for the entire. While kids may lose focus from fishing from time to time throughout the trip, there are lots of other non-fishing activities that can be done on the ice during down times. It can also be rather challenging. Finding where the fish school and how to entice them to bite may require quite a bit of leg work and determination, but when the bites finally occur, the excitement is indescribable. Before heading out, make sure you have a valid BC freshwater fishing license, and check if ice fishing is permitted at the lake you wish to visit.

Editor’s Note: Rodney Hsu is the founder of Fishing with Rod one of Canada’s most popular fishing internet channels. To see his videos please visit https://www.youtube.com/user/fishingwithrod.