After fishing for pike and walleye in North Central Montana we had planned to spend Friday touring Glacier National Park. Meanwhile, deteriorating road conditions forced us to remain in Chester for another night. Rather than drive back to Great Falls and catch and early flight out we opted to ice fish for rainbows instead.

Armed with a new arsenal of baits, we teamed up with Kim Anthony of the Ice Fishing Montana and spent the day targeting rainbows through six inches of ice in Wheat Country. Keep in mind, none of us had fished this area for trout in the last year. We had a friend that fished the lake a month prior, but that was all the knowledge we could garner. Fortunately, the day was successful. 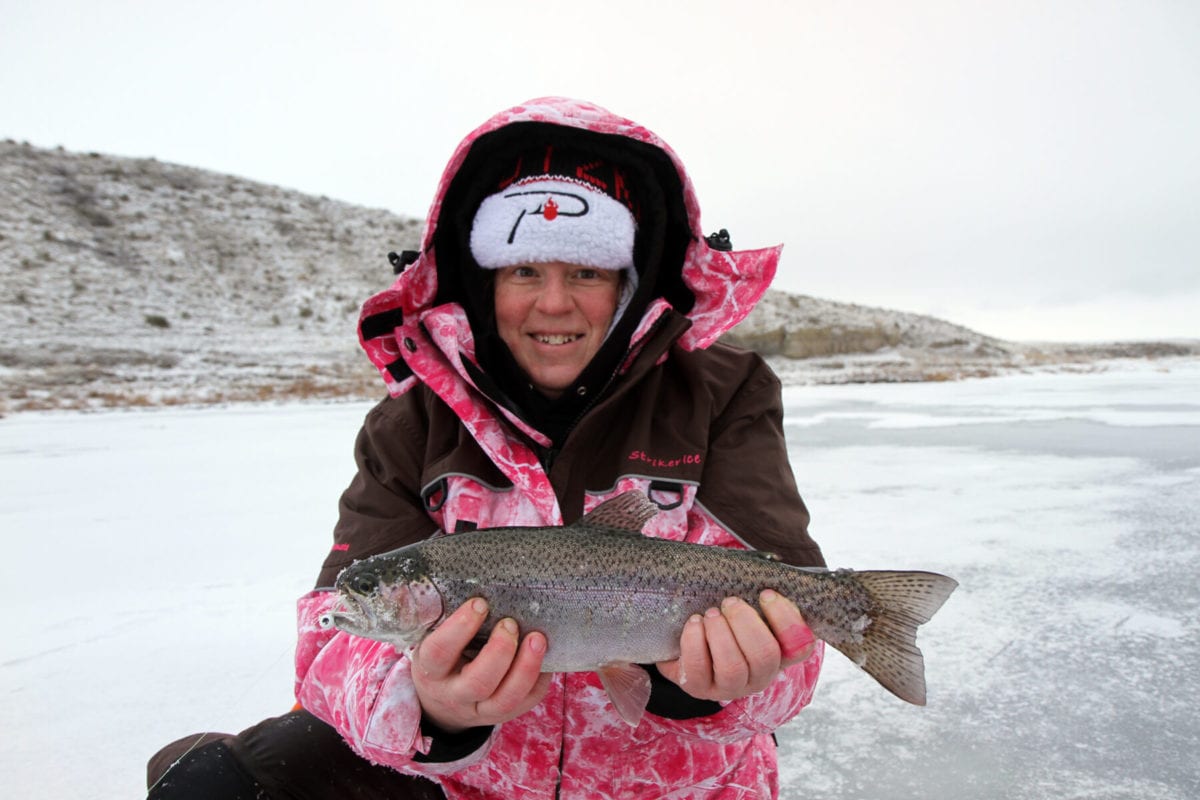 In fact, the action was so hot I didn’t touch a rod as I manned the cameras while filming our newest edition of Pautzke Outdoors. It didn’t take long to learn how quickly rainbows grow in Montana. All of the fish we caught ran between 14-16 inches and carried lots of girth. 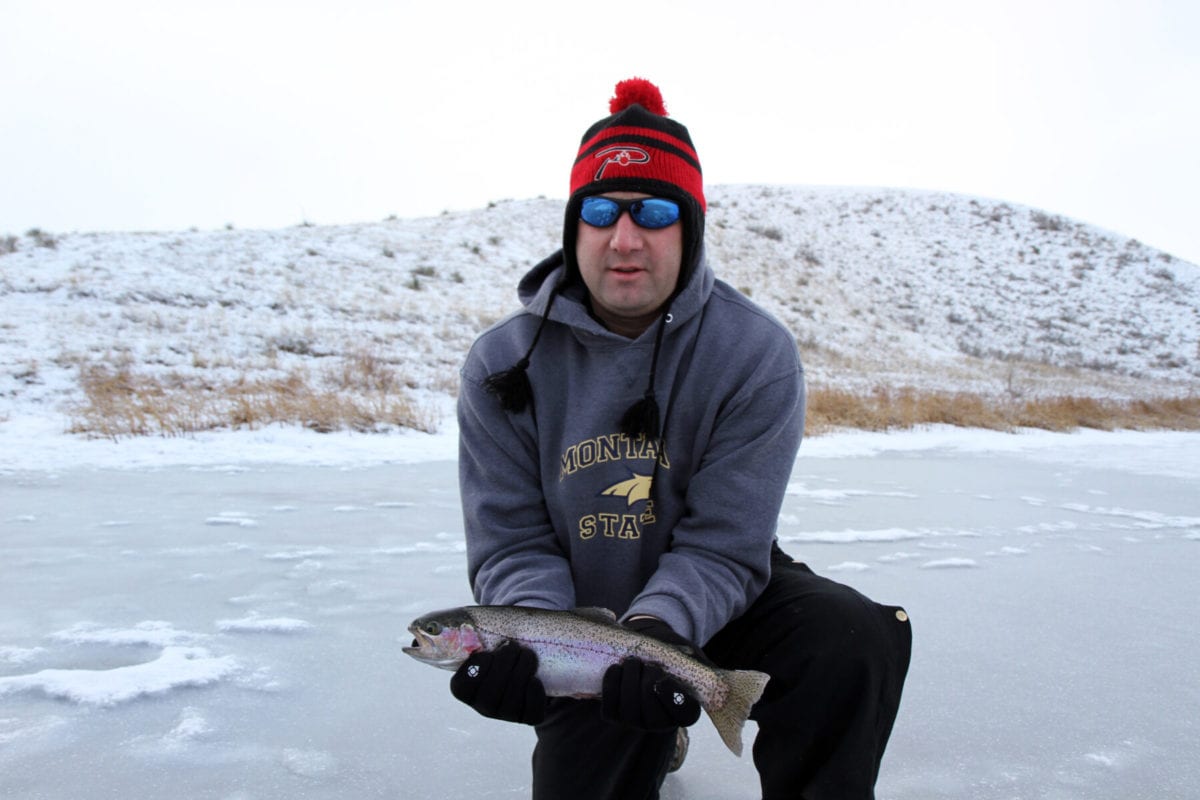 Meanwhile, Anthony didn’t want us to be content dropping our typical Gold Label and Premium salmon eggs through the hole. Instead, she came prepared with her new favorite goodies: namely Fire Dye maggots and Fire Dye grocery store corn. Maggots and corn have always been a favorite of trout anglers. On the other hand, making them UV, vibrant and stand out beneath the ice proved to be the recipe for success. 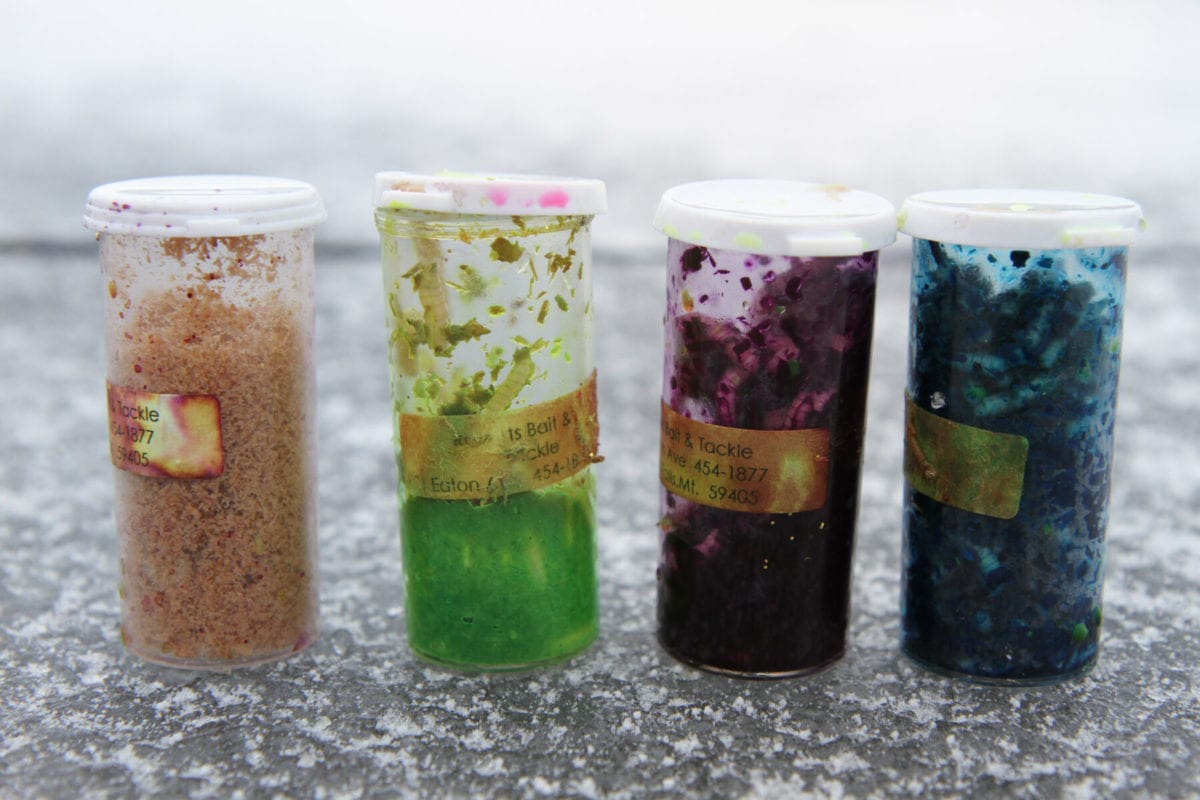 All of our fishing took place in 10 feet of water or less. The trout were cruising the shallows. When twitching jigs or simple jig heads success was limited. However, tipping those jigs with Chartreuse and Red Fire Dye corn and maggots drew instant strikes. (Yes, you could use Fire Corn for this, too. We didn’t come prepared with jars of it so we made our own.) 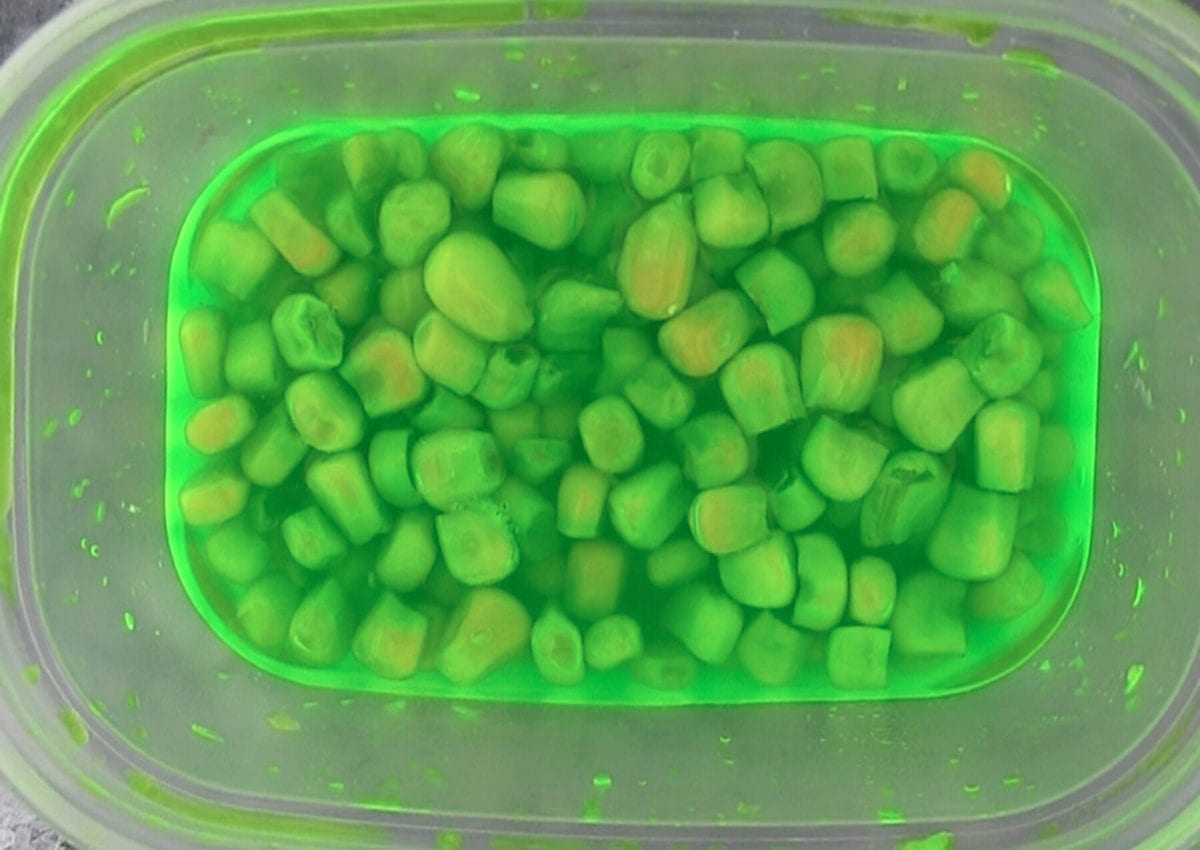 While many told us the Fire Dye would kill maggots instantly, they didn’t. In fact, Anthony had the maggots soaking in the dye for nearly a week without losing a single one. If you’ve never fished maggots through the ice for trout, give it a try. It’s easy to place five to seven on a hook for quick results. 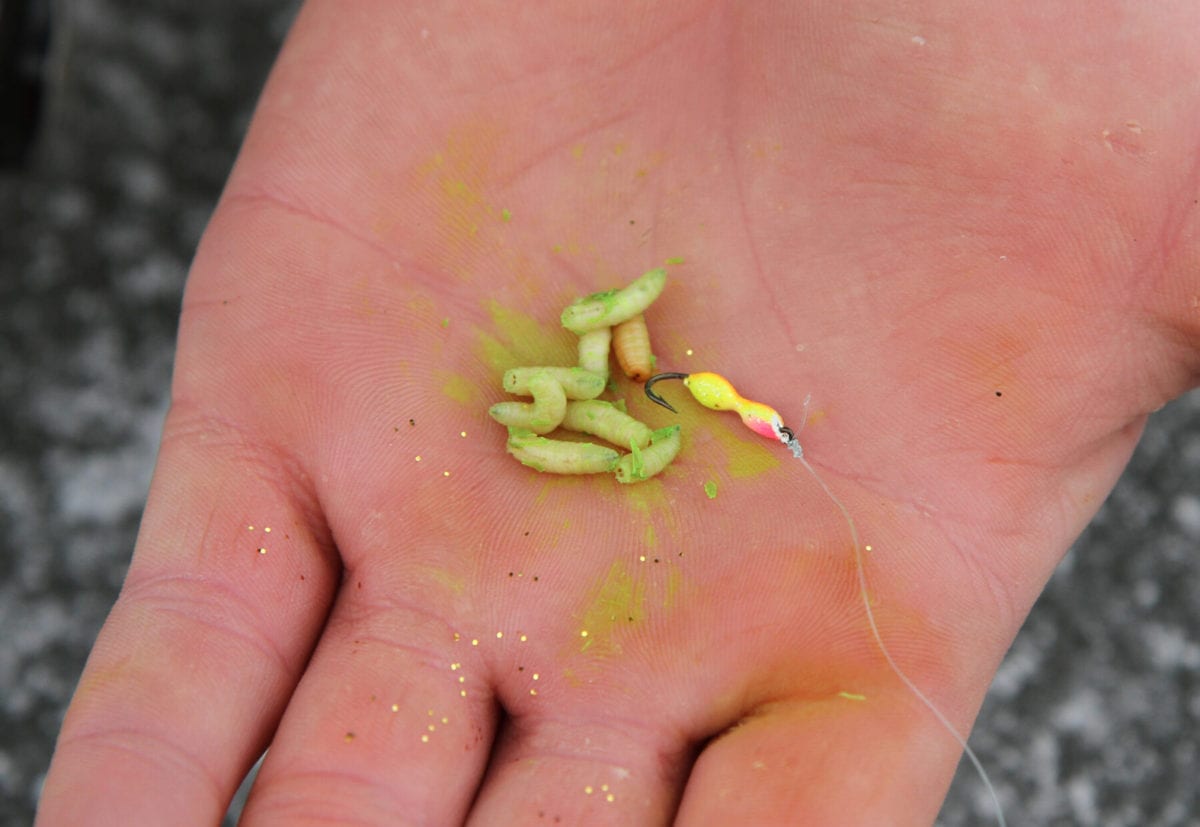 We had tip ups with us but only used one. Action was consistent jigging. We wouldn’t have been able to keep up with more than one rod (even though you can use several in Montana). We did catch a few trout tipping jigs with Gold Label and Premium eggs, but the bite on Chartreuse and Red Fire Dye maggots and the dyed corn was strong enough that eggs weren’t necessary. 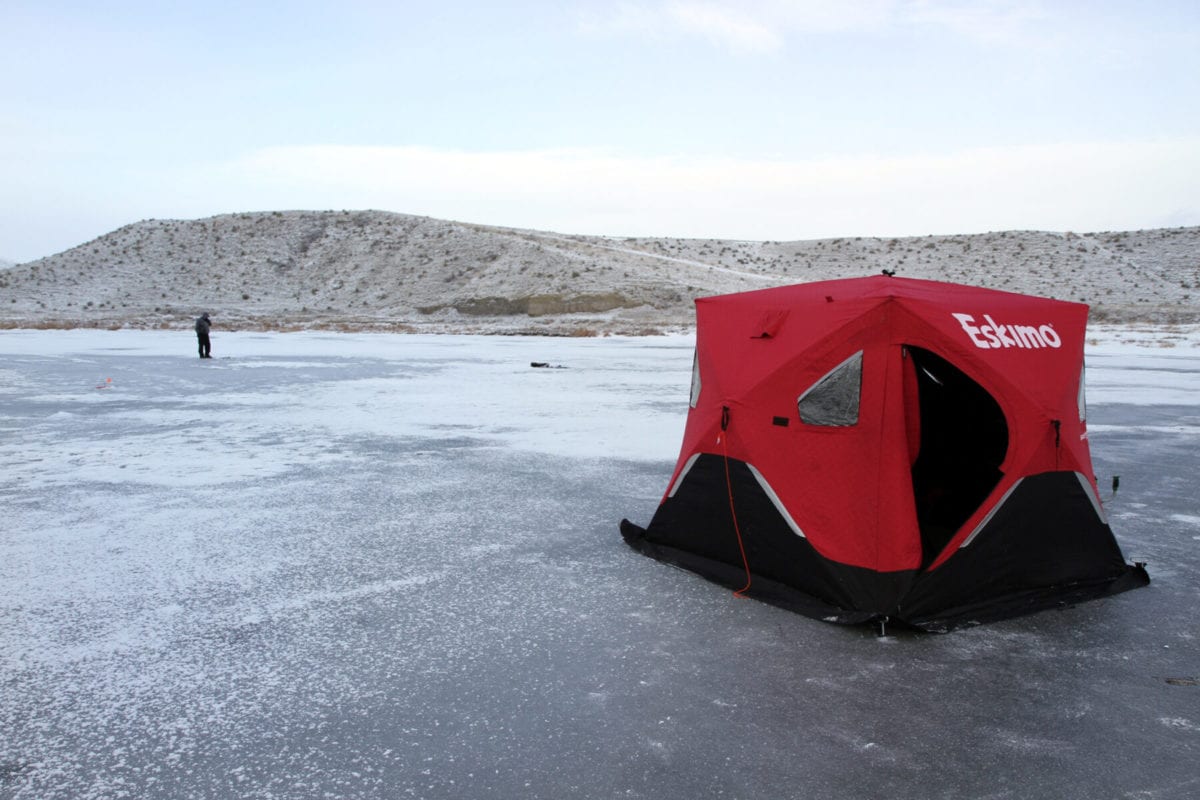 Editor’s Note: A recent Arctic blast blanketed Montana over the weekend bringing many lakes and ponds in the state to prime ice fishing conditions. Pautzke products are available locally at Scheels, Cabelas and North 40 stores. Call ahead for Fire Dye availability. Most stores were sold out last week while we were in town. Pike and walleye anglers are buying them out to color smelt and live fathead minnows and suckers.