We haven’t seen a salmon fishery like we are about to see on the Columbia River and its tributaries since the 1930s. Fisheries experts are predicting a minimum of two million fish returning through Buoy 10 and that’s being conservative. If you talk to authorities they are expecting many more. I’m starting to hear legitimate chatter of upwards of 2.6 million salmon.

If I take the conservative approach, it’s safe to say we haven’t seen this in several decades. However, if what these people are predicting happens this could be something we haven’t seen in our lifetime. 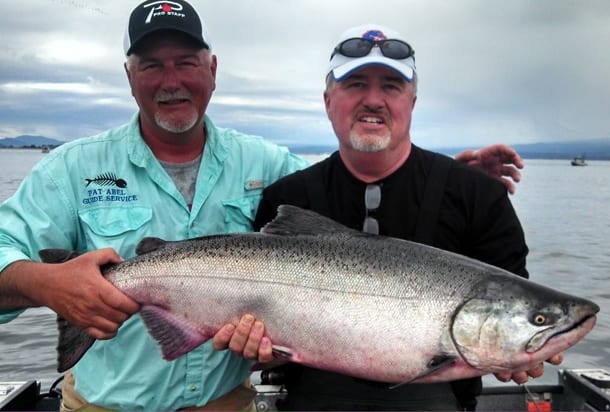 Flashback to the year 2000. They predicted one million coho to return that year when I was down in Astoria (Oregon, for those of you from out-of-state). We started with a two-fish limit. The second week of the season it went to a three-fish limit. And, by the fourth week it went to a four-fish limit.

Back to the present. They are predicting at least another 900,000 coho on top of 1.1 million Chinook. I think we are going to see the same thing we saw back in 2001, which means fishing is going to be as good as it can get. Clients are going to be happy. Restaurants are going to be full. Salmon are bringing excitement and products flying off shelves.

Right now, all the RV parks, trailer parks, hotels and marina slips are full and they have been for two months. Everybody is flocking here to catch salmon now that the entire Columbia River is open. Down in what we refer to as the “Buoy 10” area it’s not uncommon to see 7,000 boats a day from Buoy 10 to Tongue Point, which is a 22-24 mile stretch. 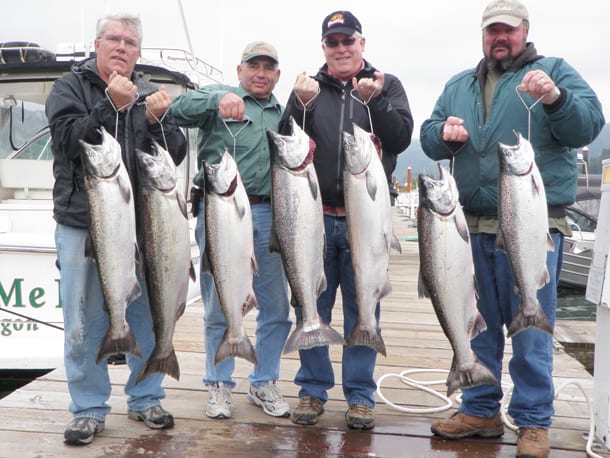 The salmon aren’t wasting time coming. Normally, we don’t see coho returning until mid August or later. However, when you have a million coho expected to return there’s many early arrivals as we are seeing now. This is a great sign. The last time we saw this happen was in 2000-1 and fishing was epic. Meanwhile, consider the Chinook are also coming through at the same time. It’s going to be freaking phenomenal.

This year, in addition to a big run, we are also going to see our five and six year old Chinook come back, which are your 35-40 pound fish. Consider that the season started August 1 and I already personally know three guides that have boated a 52, 56 and 59 pound salmon. 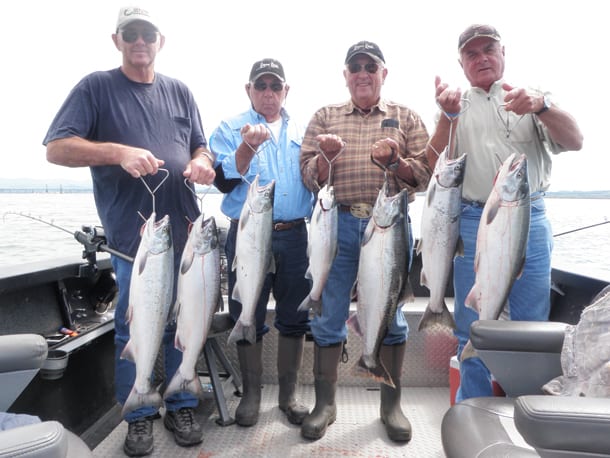 I haven’t seen them, but we’ve already been hearing about big fish coming in. If those six-year-old salmon come through, as expected, they’ll be huge. I think we are going to see those big fish August 16-25 and then again August 30 through September 7. This is due to soft tides. Those fish can’t acclimate and head upriver right away because there are soft tides. This means we pick them off from Astoria to Tongue Point.

Regardless of where you are fishing on the bottom 25 miles of river there’s two widely used techniques, namely lead and divers with brined herring and spinners. When I fish lead I fish it to the bottom. On the contrary, when running divers I run line counters, letting them out to certain line numbers and when I get bit I know where the salmon are.

I believe on an incoming tide the fish are more suspended. On an outgoing tide they are going to be right on the bottom and that’s where you’re lead comes in. Normally, I’m using 10-12 ounces of lead, depending on current. You might have to go heavier if the current is really strong.

I’m a firm believer that these fish have a strike zone. I’ll give you can example. Often on these outgoing tides the zone is right near the bottom. You need to get your gear close to the bottom to catch fish. That’s where you’re bait comes in. As the tide comes in we start using Delta Divers with spinners and try to figure out the depth where they get bit, too. Find the right depth and you’ll catch fish. It’s a simple strategy.

When I’m using herring, I’m plug cutting them and brining them in Blue, Green and Chartreuse Pautzke Fire Brine. Some people will also use Natural Fire Brine, but I like color. Spinners work, but I’m a bait guy and I think I’ll get more fish on bait than I will spinners. Keep in mind, these salmon are 15 miles from the ocean. They are still feeding on bait. Sure, we get them on spinners too. I have tons of spinners, but the fish are bait eaters.

You need to order your bait a day in advance because there’s a lot of bait being sold around here and you want to make sure there’s good bait left for you. If I have six people on the boat I have to buy four pounds of herring and four pounds of anchovies a day. The problem is this is fresh herring, dipped that day and brought to the marina. The scales are gone and if you troll fresh herring they’ll fall apart quickly. This is why the Fire Brine is so valuable. You need to get those herring and anchovies in the Fire Brine and put them on ice right away. What the brine is going to do is firm them up, keep it from breaking apart as quickly, make them shine and last longer. You want the salmon to see your bait, don’t you? 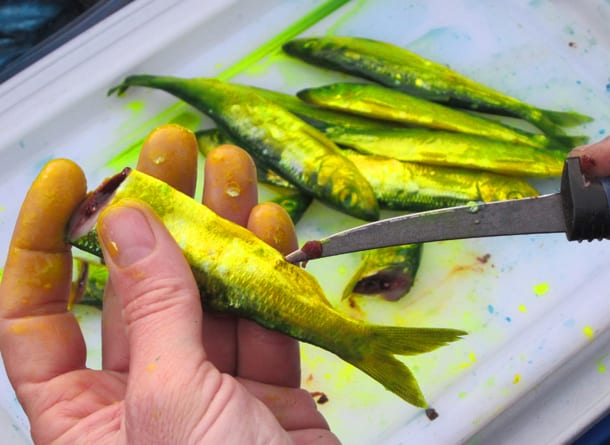