It was one of those days when you didn’t want to take your gloves off to grab a camera and snap a photo. The temperature was well below freezing and fresh off Lake Huron wind was pushing up the river canyon. Even a sweltering paper cup of Tim Horton’s steeped tea went cold instantly.

Meanwhile, in this section of the Great Lakes steelhead were crushing spawn sacks filled with Pautzke BorX O Fire cured steelhead eggs and having traveled from Southern California to float the Ontario’s Saugeen River with Josh Choronzey, who grew up fishing the Bruce Peninsula, I was in town to take as many photos as I could.

Minutes after launching the drift boat Choronzey hooked a bright steelhead. I took off the gloves, snapped a photo, posted it to Pautzke’s Facebook and within seconds began fielding comments. Many were locals from the Owen Sound area, others near Toronto and Niagara area anglers followed suit.

“Why you post pics from there?” shouted another Ontario angler on the message board.

Roughly 30 minutes from the regional hub of Owen Sound, the Saugeen is no secret. Managed to provide Ontario anglers with a strong return of steelhead, it sees a tremendous amount of pressure daily from fall through spring and is able to maintain a wild and hatchery steelhead run even with the two-fish limit available to anglers looking to grill a few fish.

Forums, message boards and Facebook are littered with daily photos of prized fish from here. It’s one of Canada’s most accessible and premier steelhead fisheries and no one is shy about talking it up. Pressure doesn’t rise and fall with the number of photos posted. It’s always here. The Saugeen is the equivalent of the Salmon River in Upstate NY and the Manistee in Michigan. The systems drive the local economy and attract anglers from hundreds of miles.

It was early December and Southampton, Ontario, Canada, had just dodged a big snowstorm that had crippled travel in the GTA. I was too busy filming Choronzey and Big Jeremiah Johnson, and promoting this wonderful resource to the province via Facebook that I was only able to make a few casts throughout the day. (I hooked one fish and lost it.) On the other hand, it only took seconds to realize how popular this river is to Ontario.

The Lower Saugeen, while only a few kilometers long (or miles in The States) is Southern Ontario’s most heavily fished steelhead fishery. A mere three hours from Toronto, and even closer to the Hamilton area, the system benefits from a locally charged hatchery program that’s funded by local donations and volunteer work. The joint program between the Ontario Steelheaders and the Lake Huron Fishing Club is a successful model that should be commended for their efforts.

(Above) A clipped fun denotes a hatchery steelhead.

Even on a midweek day there can be hundreds of anglers lining the bank. It’s busier on weekends. A several mile section of water is dotted with shore anglers, standing side by side for a chance at catching steelhead.

Even in the dead of winter, the Saugeen is a tourism machine, drawing anglers geared in full body waders, armed with $500 reels and $300 rods, and walking in vests packed with spawn bags filled with cured Chinook and steelhead eggs, hooks, line, weights and much more. These people eat locally, fill their cars with gas, stay in local hotels, drive through Timmy’s a few times and day and dream of when they can return with new friends for a chance at a steelhead bolting upriver from Huron.

The river doesn’t yield success to everyone, yet I saw dozen of anglers catch steelhead, some of which were released and others brought home for dinner. It didn’t take long to learn there are two methods that drive the fishery: beads and cured eggs fished in bags.

While Choronzey tells me the bulk of the steelhead is still in Lake Huron and hasn’t returned yet, there’s no doubt thousands of steelhead are in the lower river now. In fact, we caught and released many in the four hours we fished. All our fish came on BorX O Fire cured steelhead eggs tied in small bags. And, watching anglers cast and drift floats on the bank, it’s was obvious they were using the same setup and hooking fish, too.

If you want to fit in, grab a centerpin and head to the Lower Saugeen where steelhead will be around through April, or even June, as was the case last year. It’s unclear what winter is ahead of us, but the steelhead are biting now.

Editor’s Note: For more information on joining the effort to preserve Saugeen steelhead please visit the Ontario Steelheaders http://www.steelheaders.ca. When in town I recommend arriving early for breakfast at Just Like Mom’s in Southampton. It’s feet from the bank and serves up delicious breakfast! 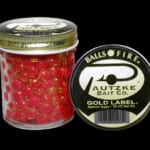 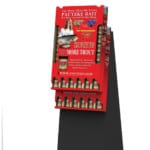 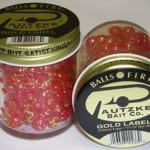