A group of five of us had worked our way from the bottom of the tiny town of Bemis up to the bridge and made hundreds of casts into countess holes on Shavers Fork only to catch three rainbows in roughly an hour. Sitting on a porch of a small waterfront cabin I noticed two guys that were watching us, kind of like an eagle waiting for a fish to hit the surface before it launched off a branch. They glanced at us a few times, but weren’t interested.

What seemed odd to me is they had a pile of rods stacked up against the wood. Meanwhile, these guys didn’t budge, even though the rods were geared up and ready. I walked up to the porch, set down the video camera and a backpack full of salmon eggs and asked them if they left any fish for us. 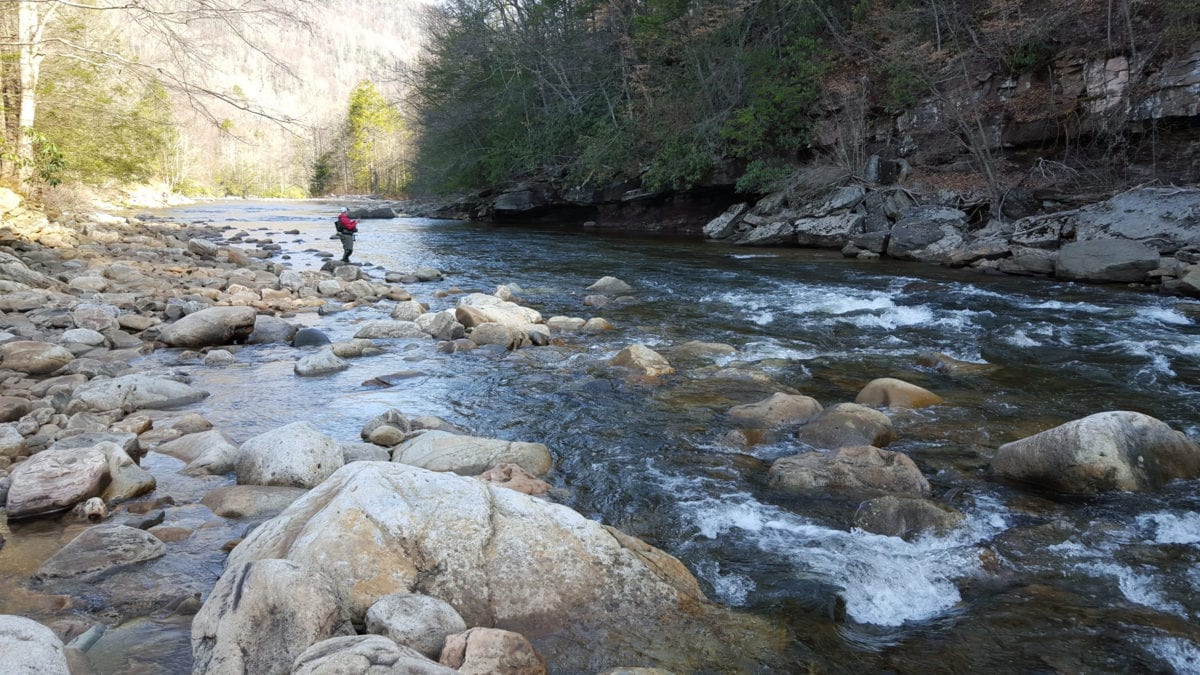 “You guys aren’t catching much?” he said. “There’s a few in that hole, but not many. You should have been there last week. This stream has been cleaned out.”

Clearly this guy was a serious angler. My beanie merely had a “P” on it, our Pautzke logo. I smiled and told him I was from out West where Pautzke is everywhere. He then told me that he’s caught more trout on Pautzke eggs then I can image, but finding a place in West Virginia that isn’t sold out of them can be a chore. I zipped opened my backpack, grabbed a jar of Gold Label and flipped it over to him.

“Here. These are easier for me to get than you,” I said.

“Have a seat,” he said, clearly willing to open up to me after our kind gesture. “One of two things is going to happen. Either the stocking truck will show up in the next hour or he’s coming in the morning. If I was going to guess he’ll be here by noon. He comes every week.” 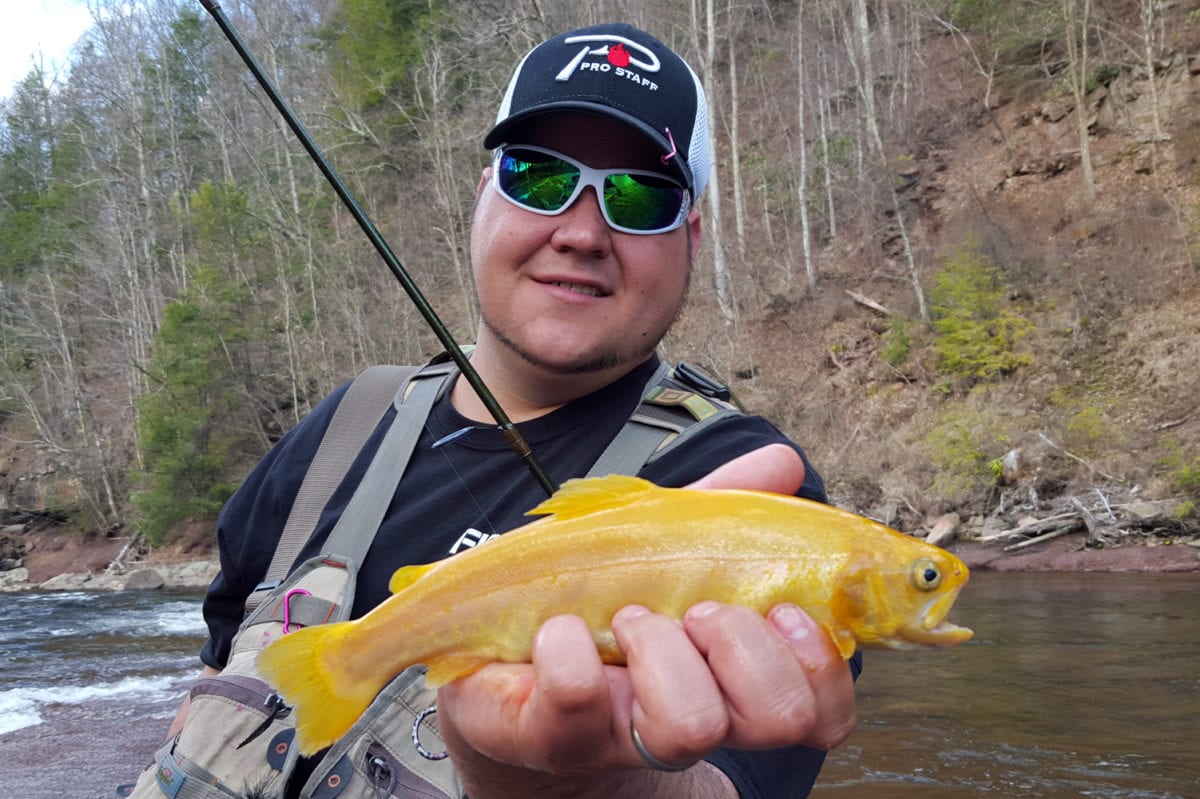 We chatted for about an hour. Still no stocking truck. They told us to come back at 10am Friday morning when the river would be replenished with trout. We headed towards the truck, opened the trunk and heard the stocking truck pull up on the bridge. He parked, grabbed a long net an unloaded a few hundred trout from 25 feet up. 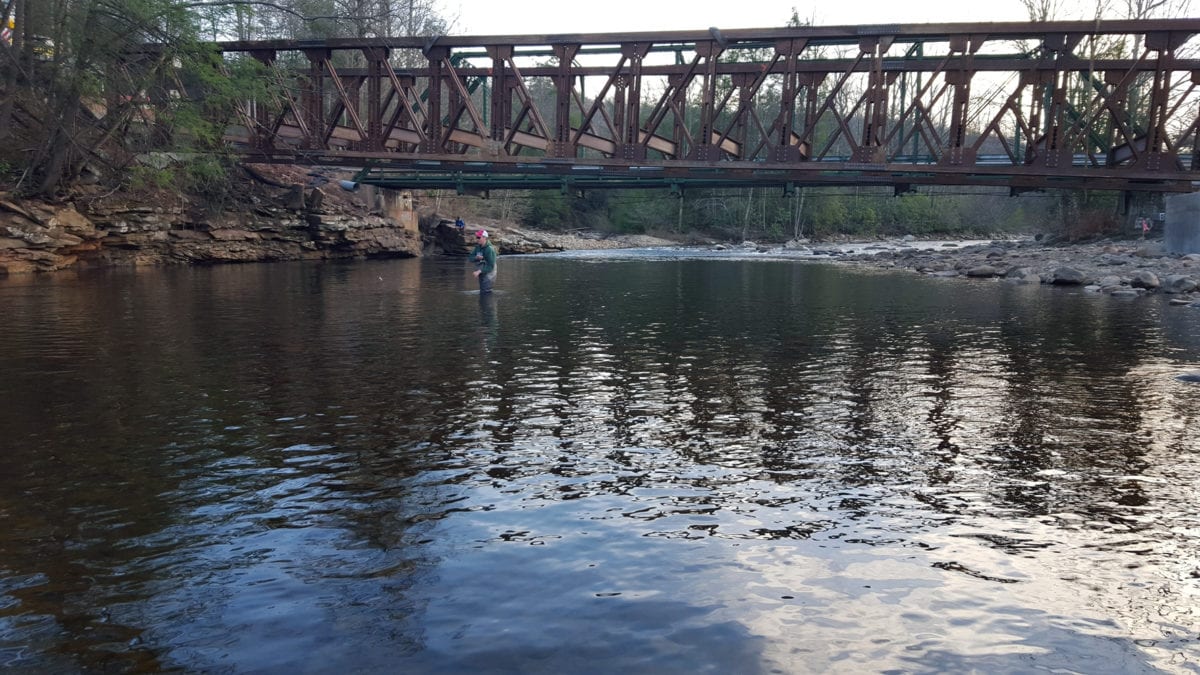 The truck then dropped off trout in a dozen more holes over roughly a mile section of the river (Shavers Fork). Several dozen anglers that had been waiting in their trucks (someone must have leaked that the truck was in route) spread out throughout the system and started fishing.

“You guys might want to wait a few hours,” said the West Virginia Department of Natural Resources employee who was stocking the fish. “I don’t think they are going to bite for a while.”

Within an hour we’d caught and released a few dozen rainbows, brooks and a few golden rainbows while filming Pautzke Outdoors (the locals kept a few for the grill). Meanwhile, it only took minutes to learn how popular this place is with locals and out-of-towners. Of the anglers we spoke to a few were from Pennsylvania and Virginia, several were locals from nearby Elkins, some were from Morgantown and others Southern West Virginia. And, while Lower Shavers sees massive fishing pressure the Bemis section of the Shavers Fork gets plenty, too, and clearly isn’t a secret to anyone. Pressure forms often. 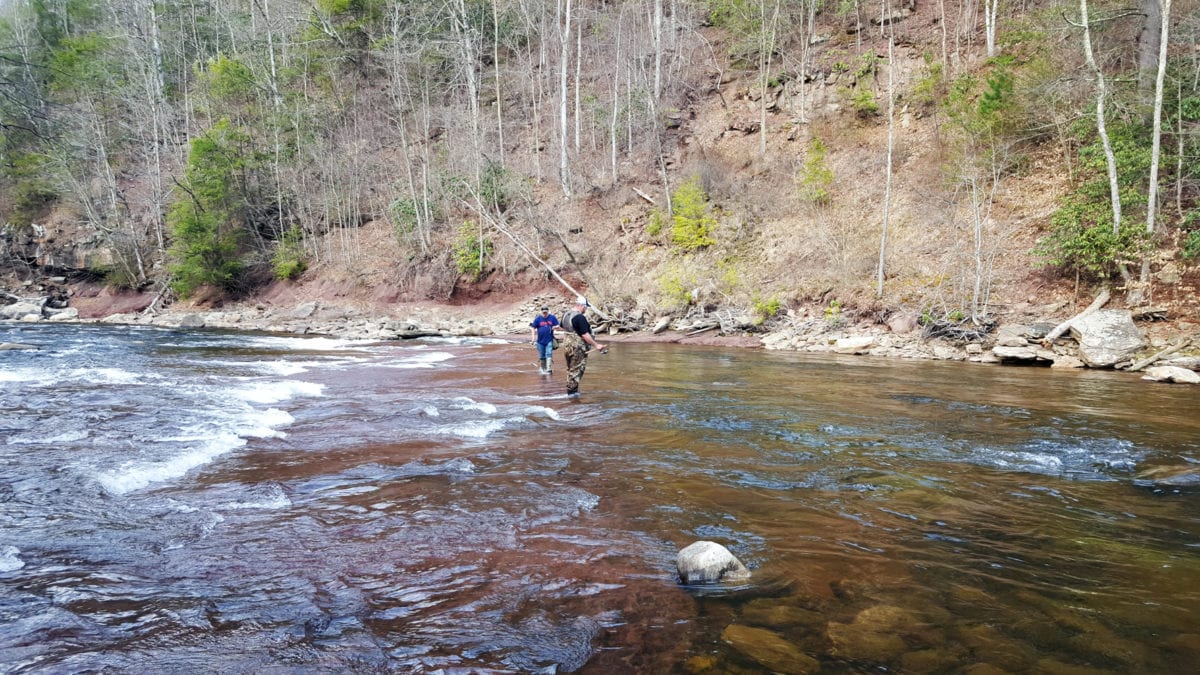 The key to success (as with most WV streams) is arriving during the week. By the weekend most of the streams are gutted as few catch and release in this region. If you’re coming focus on fishing from the small waterfall 100 yards upstream of the bridge on downriver for a mile through the campgrounds. The WVDNR stocks the system weekly to cater to put-and-take anglers. 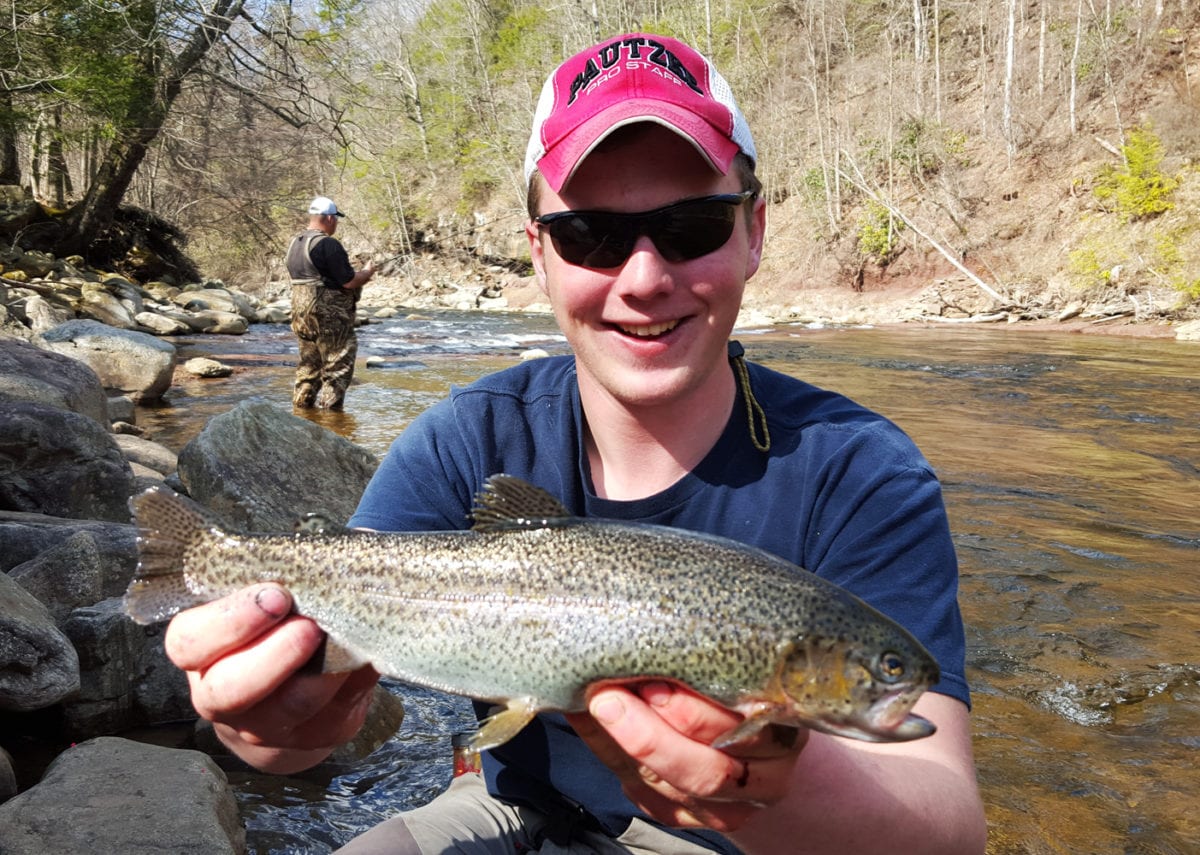 Most of the trout are going to run 10-14 inches. Rainbow trout are most available, however, golden rainbows, brooks and browns are available, too. Don’t expect large trout here as you would in Lower Shavers. All our trout were caught on four-pound test, size 12-16 single egg hooks and Gold Label, Chartreuse Garlic, Natural Deluxe and Yellow Jacket salmon eggs. If you end up coming on the weekend focus on the massive hole below the bridge or downriver in the campground and do come with several different colors of eggs. The trout get conditioned quickly. 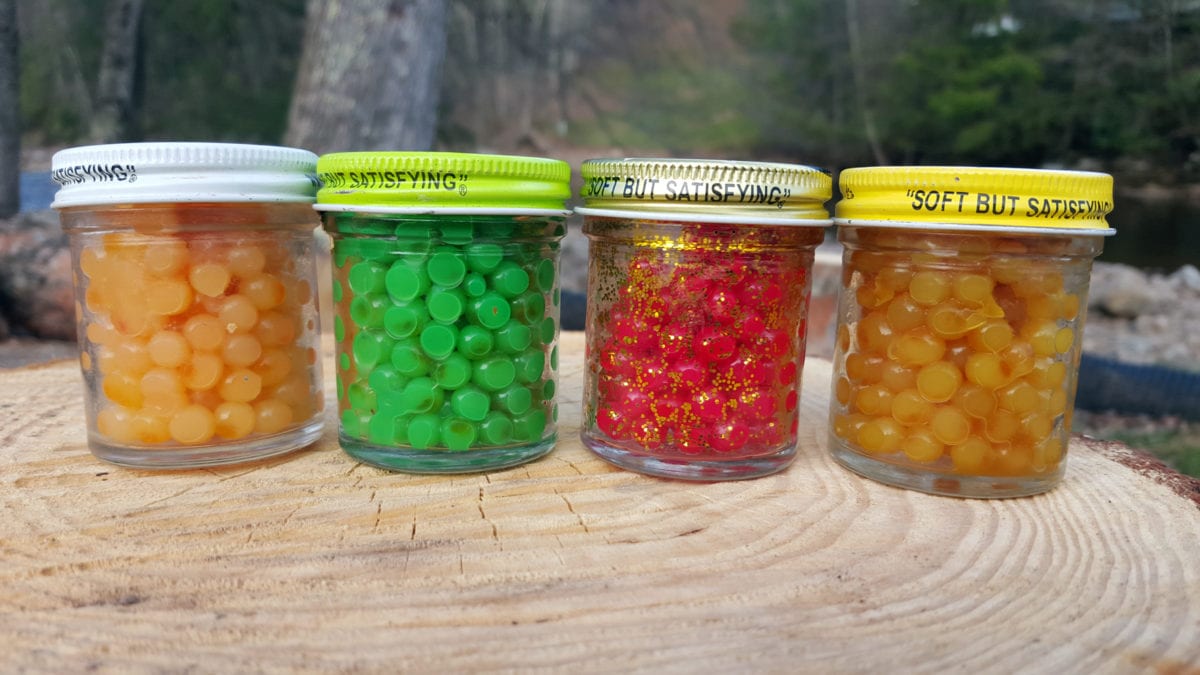 Editor’s Note: The Bemis section of Shavers Fork is stocked weekly through May. Pautzke salmon eggs are available at all West Virginia Walmart stores, Bass Pro and Cabelas.