I was prepared to wait. Wait for hours. That’s hours standing on 12 inches of ice and in single digit temperatures while watching our 12 Automatic Fisherman’s waiting for one to spring up. It was almost 6:50 am and the sun hadn’t beamed against the Milwaukee skyline yet. Meanwhile, five minutes passed and I was already getting impatient. I tucked into the shanty to grab some heat and seconds later felt the aftershocks of a 350-pound man sprinting 50 yards toward a rod waiving through the frigid air.

I grabbed the cameras, sprung out of the shack and caught Kyle Deavers of Big Boy Fishing (the 350-pound man) just as he reached the 10-inch hole. Almost 12 minutes later a 15-pound hook jaw brown trout emerged through the hole. It was not a monster for Milwaukee, but respectable anywhere. We were thrilled, removed the BorX O Fire spawn bag out of his mouth and immediately released the German brown. It was a trophy in our book and a great start to filming Pautzke Outdoors. 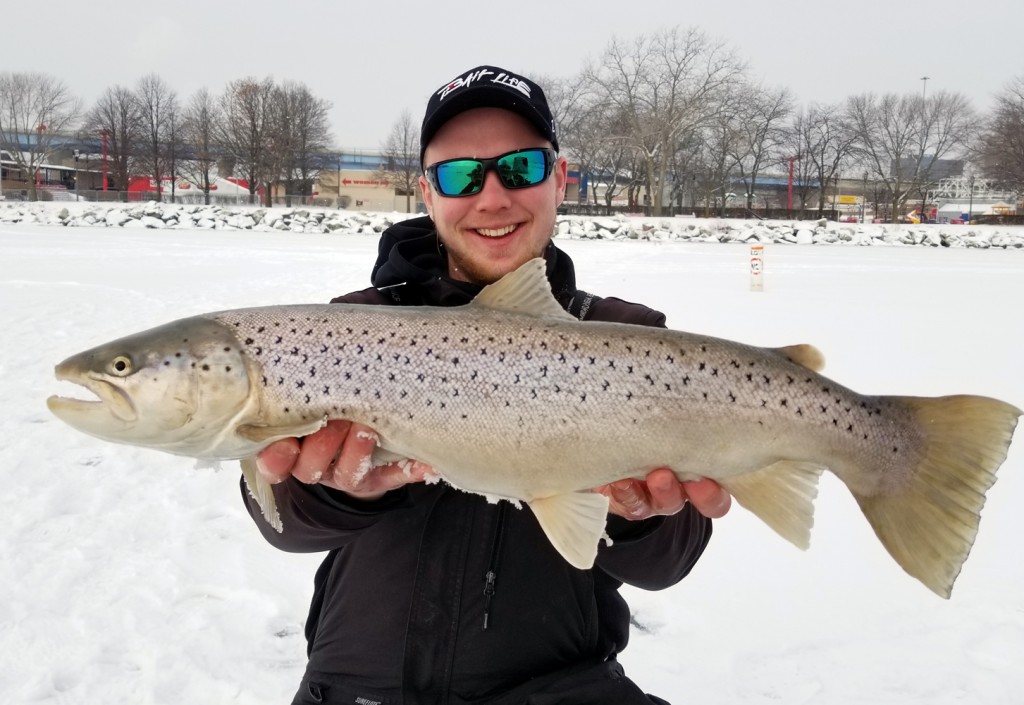 There’s no doubt Milwaukee is the North American epicenter for catching monster brown trout. Anglers from all over the world plan trips here for a shot at catching them. It’s no secret to the angling community, but never a guarantee. The browns are always around, but don’t necessarily cooperate.

Deavers prepped us the day before and reiterated that we were fishing for three bites. He didn’t expect to catch large numbers of steelhead and trout. One, however, he believed would be from a brown that was larger than 10 pounds. He was correct. In fact, we caught two bigger than 10 pounds that morning and two others between five and 10. It was a success in our minds. 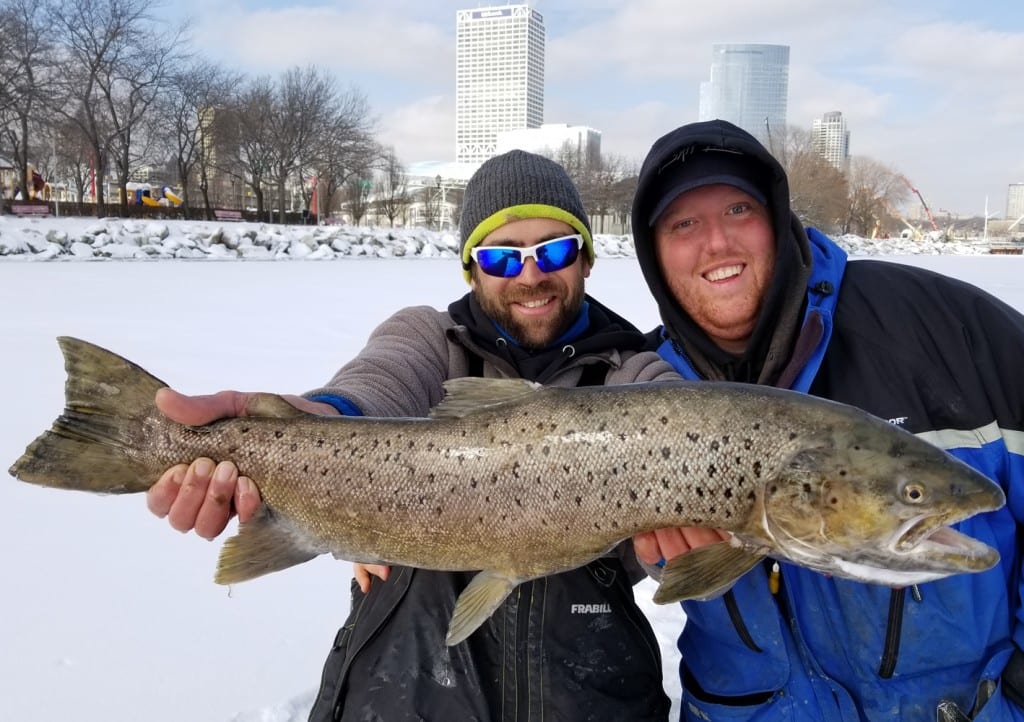 One of the best times to catch Milwaukee’s browns is through the ice, which tends to be sometime in December through early March, depending on conditions. Some years the ice is never safe. Fortunately, this year cold weather has brought safe ice in some places. Starting early is imperative. Vying for ideal spots is a must. Depending on wind direction, current and visibility some places fish better than others, which is why having a full time guide like Deavers is a must. Small details like these play a major part in success. He knew where to set lines. In fact, four other groups of anglers within eyesight didn’t gain a single bite. One group near us caught three or four smaller ones. 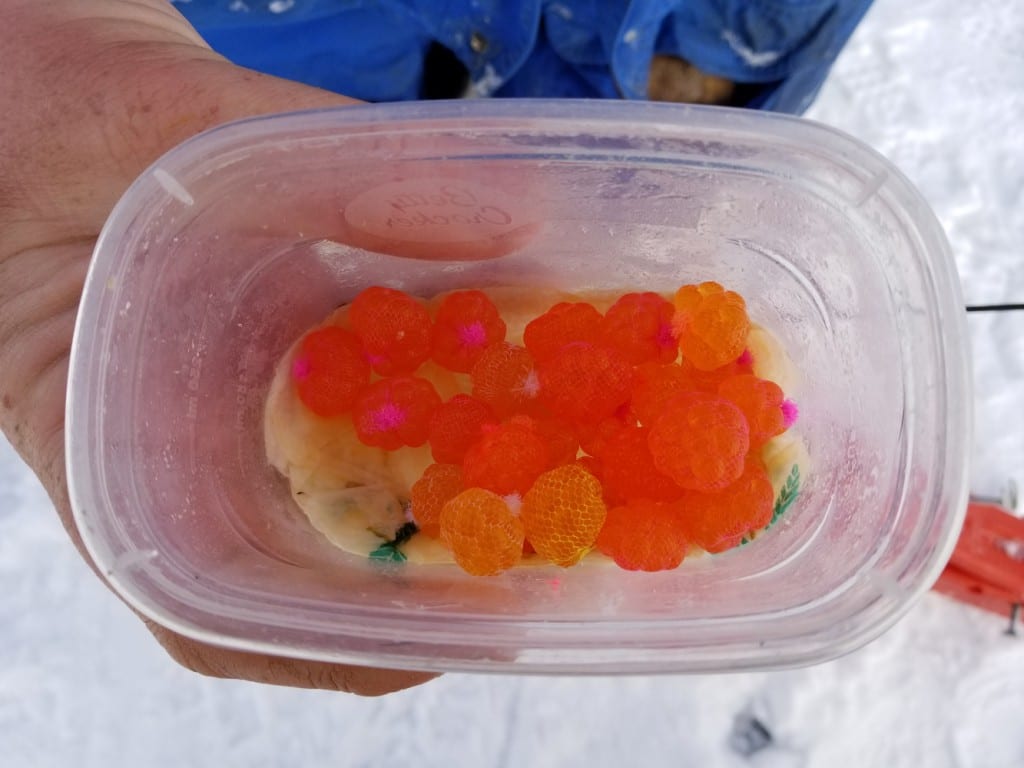 Browns prefer spawn sacks and minnows. Having both is imperative. We rigged nine rods with Natural BorX O Fire cured egg sacks and three with live Gold Fire Dye Minnows. Normally, Deavers uses Chartreuse Fire Dye minnows, but due to extremely clear water he wanted to switch to gold. The 10-pound brown we caught ate the Gold Fire Dye minnow. The rest all came on the BorX O Fire sacks, which has been the hot bait all season. 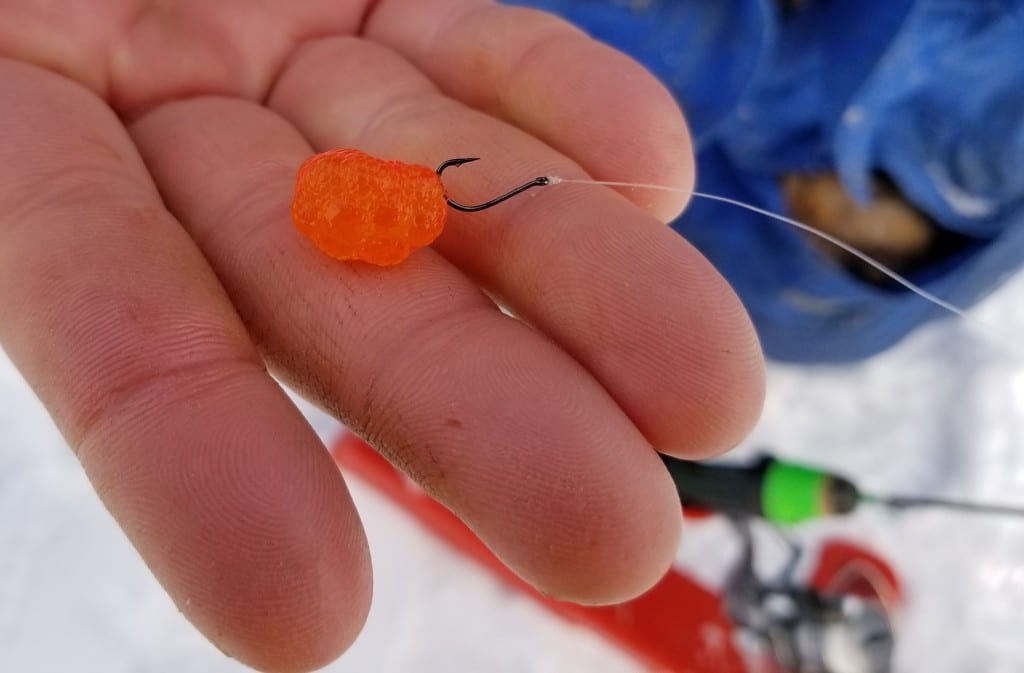 Special Note: Due to constantly changing weather conditions it’s always imperative that you check the ice to ensure it’s safe every time you venture out on it.