Trout stocking has resumed in Virginia. Meanwhile, foot traffic remains low on many planted creeks and rivers in the region as hunting remains in focus. Fortunately, that spells opportunity for anglers looking to tangle with trout this fall. We spent a week filming in the region and found excellent stream conditions at Cripple Creek.

In town to film Pautzke Outdoors we had a tough time getting directions from the state to public waters and instead opted to spend three days at Cedar Springs Trout Farm instead. It’s been roughly a year since we last wet a line here and found some of the best quality stocked trout we’ve seen in ages. The creek was stuffed with golden rainbows, browns, tiger trout and rainbows. A few brook trout were around, but they were few and far between. 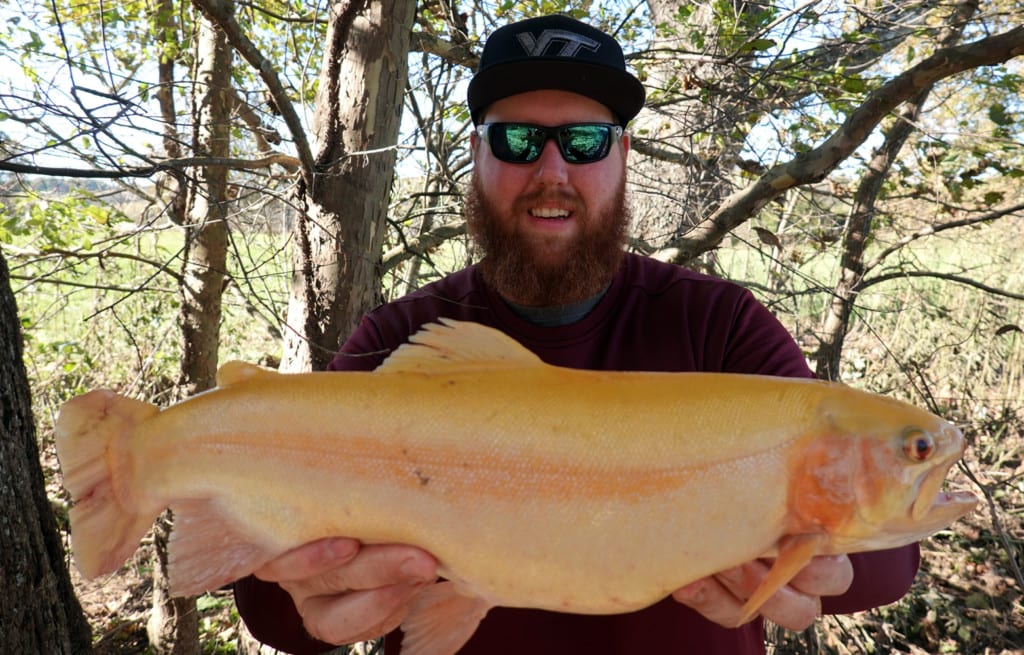 During the fall and winter crowds seem thinner at Cedar Springs, which made for excellent angling conditions. The water in the system is almost perfect. It had a slight tint to it and wasn’t gin clear. For example, we could still spot golden rainbows in each pool and some of the rainbows, too. On the other hand, the tiger and brown trout were tougher to pinpoint with their darker silhouette.

To be honest with golden rainbows in spawning mode they were tough to catch. While we convinced a half dozen to bite, for the most part they ignored us (and other anglers) no matter what we threw at them. We didn’t catch any browns even though they had been stocked. We actually saw them stock some massive browns and tigers, but couldn’t get them excited enough to eat. Management told us that the browns, tigers and goldens have had lockjaw for a few weeks now. That bite should improve as the spawn tapers off. Keep in mind, rainbows are spring spawners and are actively feeding now. 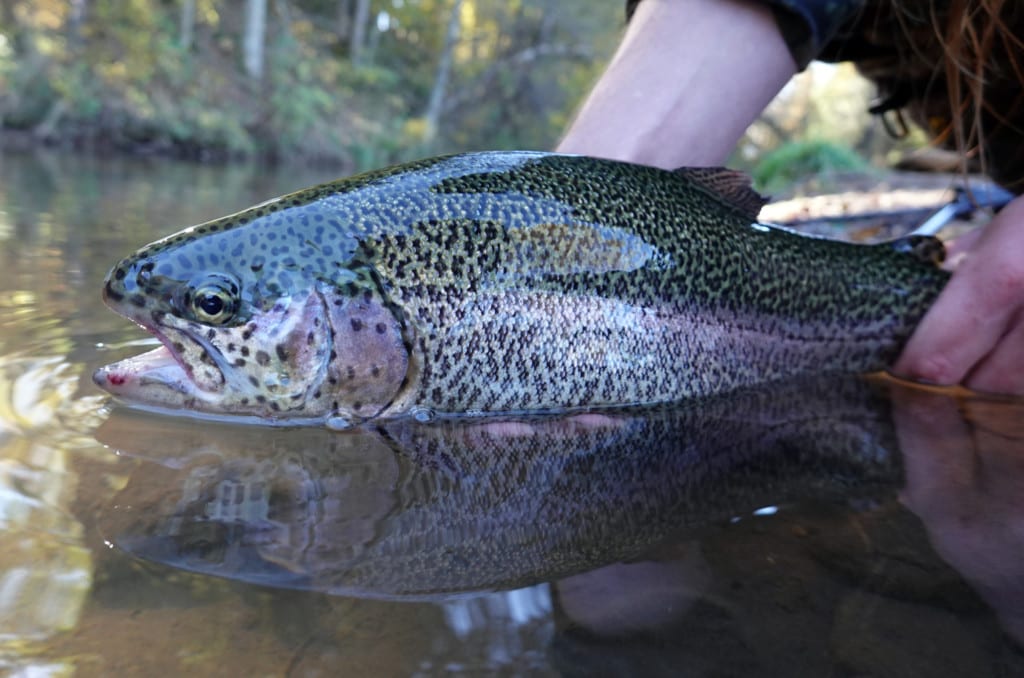 The creek is stuffed with trout and many huge trout. We caught and released trophy trout up to eight pounds and had an amazing time filming here. The quality was incredible. It rivaled the trophy trout the state stocked in Big Tumbling Creek over Father’s Day weekend. In fact, we didn’t catch any trout smaller than 16 inches. This section of the creek is a pay-stream, but worth every penny. Fish of a lifetime are caught daily, if not each hour. 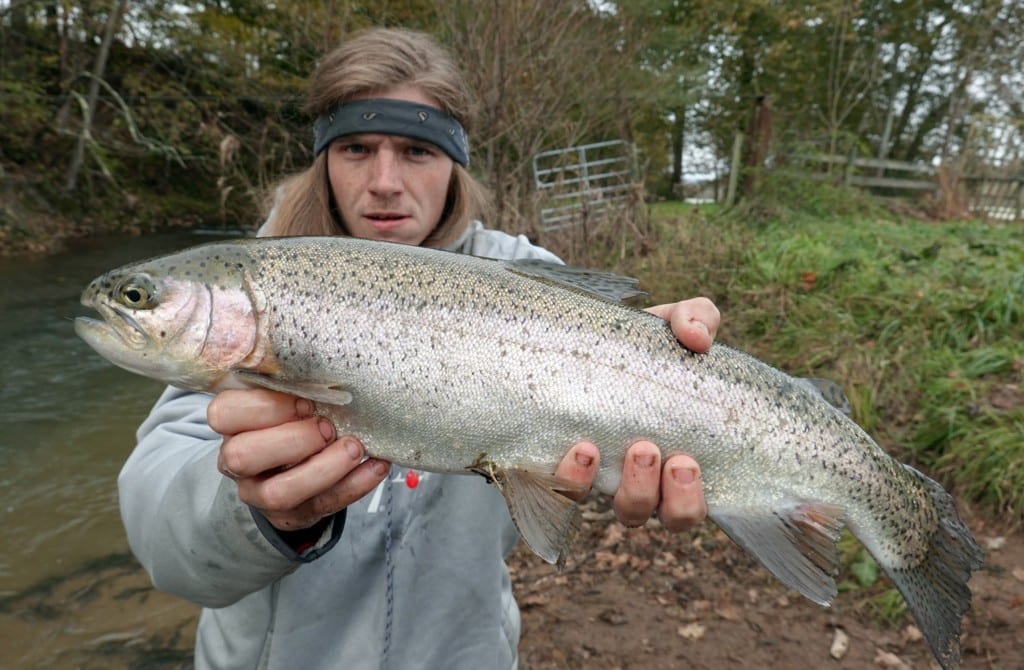 We only pitched two baits: Fire Bait and Fire Balls. That was the focus of our videos and everything worked out the way we hoped. Even while we talked to other anglers who struggled with large stickbaits, flies, spoons and big spinners we remained in constant action. The bait bite was on fire. This is proof you don’t need big bait to catch large trout.

We used mostly size eight to 10 hooks, but had issues with quality. One of the name brand packs we bought from a sporting goods store didn’t hold up. The shank bent on many of the trout we caught trout. Therefore, we shifted to Eagle Claw Lazer Sharp hooks and the issue didn’t persist. Because the water wasn’t gin clear we were able to get away with six-pound Berkeley Vanish. The first day all our trout were caught on Garlic Salmon Egg, Peach Garlic and Garlic Wildfire Fire Bait. These were all fished as Fire Worms, rather than in a ball (that means rolled into a worm shape). The second day Pink Shrimp, Red and Chartreuse Anise Fire Balls stole the show. I almost forgot, we also used Yellow Jacket salmon eggs. Oftentimes we pegged a Fire Ball above the eggs and a Yellow Jacket on the hook. 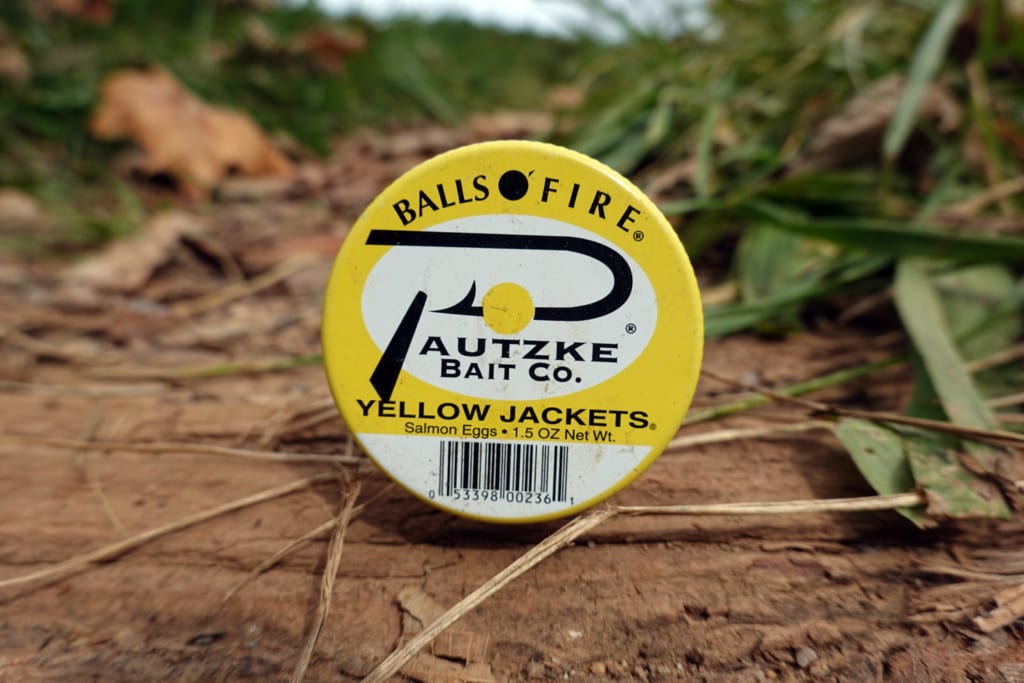 *When fishing at Cripple Creek, Team Pautzke recommends eating lunch at The Dutch Pantry in Rural Retreat. They have excellent sandwiches!

Editor’s Note: A Virginia fishing license is required to fishing at Cedar Springs Sportsman’s Lodge, but a trout stamp isn’t, which is good news for out of state residents (that’s the expensive one). For more info on booking a spot here please visit https://www.facebook.com/Cedar-Springs-Sportsmans-Lodge-189806261046038 or http://cedarspringstrout.com.