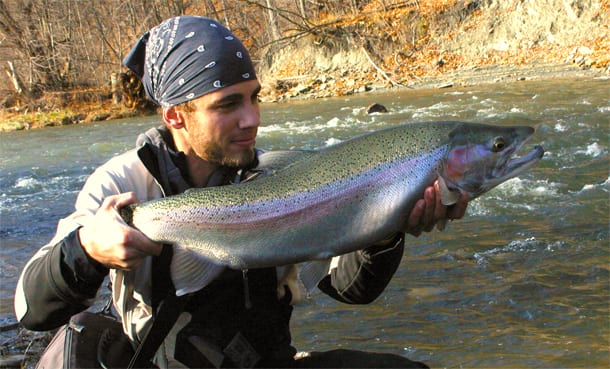 Born in former Yugoslavia, Bojan Zivkovic moved to Toronto, Ontario in 1993 at age three. He has Trout and salmon fishermen in his family, so there was no doubt that he would grow up spending his weekends tagging along with his godfather on steelhead fishing trips to Southern Ontario rivers. Having fished most of his life for both cold and warm water species, he did not start to take trout and salmon fishing passionately until 12. Since then, he’s been addicted.

Bojan, also known as ‘Bojangles’, is a diehard steelheader, who also enjoys chasing migratory trout and salmon species. You can find him chest deep wading rivers and tributaries of the Great Lakes , centre pinning with long rods for silver fish from August to May, and on the lakes casting and trolling baits throughout the summer months.

Being a conservation minded person, Bojangles has planted thousands of trees along rivers and worked on many streamside rehabilitation projects. Measuring, recording, and transferring steelhead at the Credit River used to be his full-time job during the fall and spring season. He has worked at Bass Pro Shops, a few local tackle shops, and with local conservation groups at fishing shows throughout his years.

From late September until May, Bojangles focuses on chasing steelhead throughout Lake Ontario, Lake Huron, and Georgian Bay tributaries. His dream is to move out to the West Coast to pursue runs of bigger and feistier migratory Trout and Salmon species.