After no fall salmon season (due to no water) we’ve finally got some good news on the Smith River. The rain we’ve been waiting months for brought in a large number of fresh steelhead. Since we’ve received heavy rain the last few days the numbers of steelhead in the river have been better than normal. We’ve already seen larger fish and more of them than we’ve been accustomed to seeing the last few years.

In recent years the month of January has been fairly slow. However, we seem to be bucking that trend this year. For example, in the last few years January has only produced one to three hook ups per day. Fortunately, this season we’ve been hooking three to five steelhead a day. Quite a few of these fish have been in the mid to high teens, and some have been larger.

There’s no doubt that the quality of fish is better this year. We’ve been already seeing steelhead as large as 22 pounds caught, and I’ve personally landed a few in the upper teens. This is likely a reflection of good ocean conditions the last few years. Keep in mind we’ve had to contend with high water in February and March the last few years. That’s allowed for better escapement. Hopefully, that better escapement is going to be responsible for an entire season filled with good returns.

I’m hoping this is the start of a banner steelhead season. Let’s hope it’s consistent and continues through the end of the March. The Smith is known to have some of the largest steelhead on the West Coast. I have a feeling it’s going to be a big fish year because we are already catching large steelhead. If you want a chance at a trophy steelhead you should book a trip now to get the best dates available. As soon as anglers see photos of these large steelhead most of the quality guides are going to get booked right away.

As I always do on the Smith River I’m going to be fishing dime size pieces of Natural BorX O Fire cured roe paired with a Puff Ball and a piece of Orange or Cerise Atlas Mike’s Glow Yarn tied in the roe loop. The reason I do this is because the yarn helps absorb the scent longer than the bait. We will get into that in a minute. Let’s focus on line and hook size first. Because of our clear water I use 10-pound Maxima Ultragreen and place the roe on a No. 2 Gamataksu hook.

Many years ago scent wasn’t a huge part of our fishery. However, in recent years it’s become imperative. While I like many scent I’m using mostly Atlas Mike’s shrimp scent right now. If you’ve been in my boat you’ve seen the Glo Oil Spray and Shrimp Lunker Lotion. I’ll spray or scent the roe every few casts with it. The oil slick that comes off of the scent lasts longer than the scent of the roe itself. 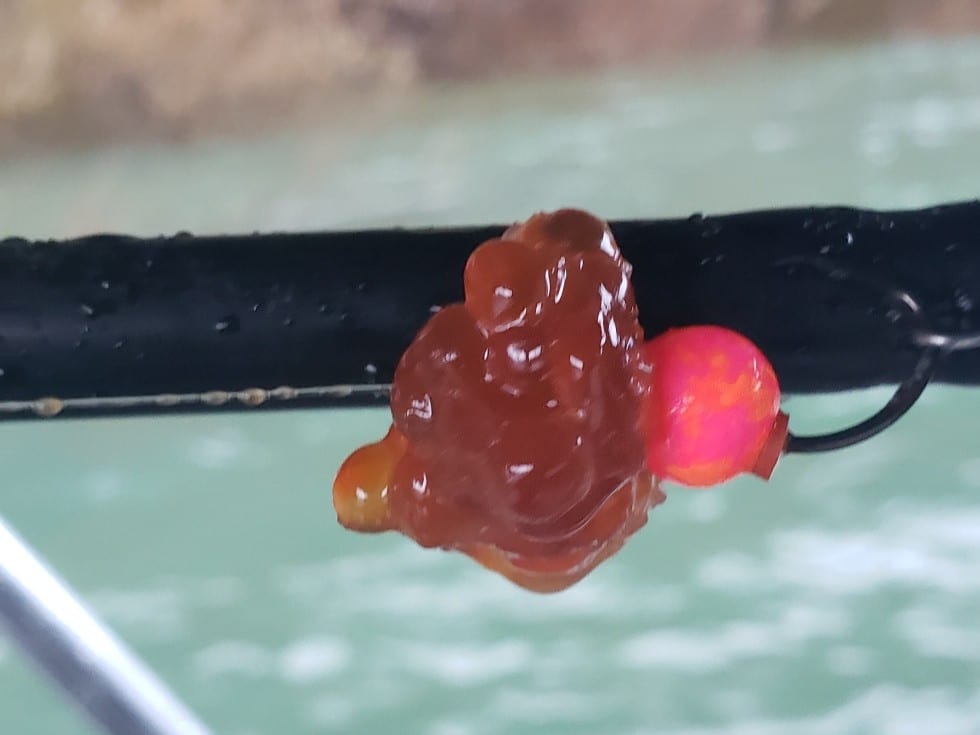