BROOKINGS, Ore. – There’s no shortage of quality steelhead rivers in the Pacific Northwest. From Washington’s Bogachiel and Cowlitz to Idaho’s Snake and Clearwater to Oregon’s Nestucca and Umpqua, an avid angler could easily list a dozen streams worthy of being ranked among the best. No list of top steelhead rivers would be complete without including the Chetco. Those who regularly fish it would argue it belongs near the top. If ever there was a “perfect” steelhead river, the Chetco would be it.

Flowing 55 miles from the rugged Siskiyou Mountains to the Pacific Ocean at Brookings, the Chetco has one of the healthiest steelhead runs in the Northwest. The lower river has a decent run of hatchery steelhead. The upper river, meanwhile, has one of the highest spawning densities of wild steelhead anywhere. While anglers are encouraged to release wild steelhead, the Chetco is one of the very few rivers where native fish can be retained. Biologists say its run is healthy enough.

The vast majority of the Chetco watershed is protected. More than 40 miles of the river are located in the Rogue River-Siskiyou National Forest. The headwaters begin in the remote Kalmiopsis Wilderness. Designated as a National Wild and Scenic River, the Chetco’s prime steelhead habitat is protected.

For a steelheader, it has countless riffles, flats, tailouts, pools and rock gardens. The long, 4-foot runs are a side-drifter’s dream. The lower river gravel bars are popular with plunkers. And the vast public access in the Forest Service section of the river offer plenty of room for bank anglers to get away from the crowds.

Steelhead are present in the Chetco from Thanksgiving through March. Peak season is the last week of December through late February.
Steelhead average 6 to 10 pounds on the Chetco, but bigger fish are common. The river record is a whopping 28 pounds. Each season, fish over 20 pounds are caught, with numerous fish between 15 and 18 pounds. Because of the broodstock hatchery program, the hatchery fish run from December into March. They also rival the size of their wild cousins.

The perfect side drifting river

Side-drifting from drift boats is by far the most popular technique for catching steelhead on the Chetco. Side-drifting allows anglers to get an extremely natural presentation while covering large sections of water. It’s not uncommon for some drift boaters to float 12 miles of river in a day, fishing the entire stretch.

Side-drifting Chetco style includes the use of plastic weights known as “sploosh balls,” now sold as Mad River Drifters. These weights have a lot of mass compared to weight, and naturally drift along without hanging up, allowing anglers to get a “perfect” drift. Natural-colored roe is the go-to bait on the Chetco. Perhaps the hottest bait on the river are tiny clusters of salmon or steelhead roe cured with Pautzke’s BorxOFire. That’s my favorite bait, although I like to add sugar to the cure, along with anise oil.

I put together a video on how to cure eggs that can be found here:

The Chetco has a reputation of being crowded. At times it is. But the handful of local guides on the river (most guides come from out of town) are often the most successful,both at getting customers into fish, and getting them away from the crowds. The Forest Service section of the Chetco is limited entry for guides, meaning just a few are allowed to go to that section. 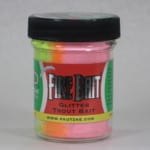 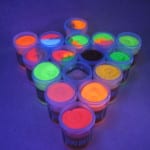