Saturday was the busiest I’ve seen the Cowlitz River in two decades. When I launched at 6:30 am there was a line of 30 boats behind me, the parking lot was full and I’d say there were a minimum of 80 boats on the river during the day. The banks were packed with anglers. It’s nice to see so many anglers out utilizing the resources our state hatchery system has created. There must have been $20 million in boats alone and it’s obvious how important this fishery is to our region.

Steelhead season is in full swing here in Western Washington. There’s ample opportunity to catch steelhead throughout this system and we’re slowly seeing a few springers show. For the most part our boat is hooking limits everyday. Whether your land them or not is another question, but steelhead are definitely available and there’s some quality fish around. 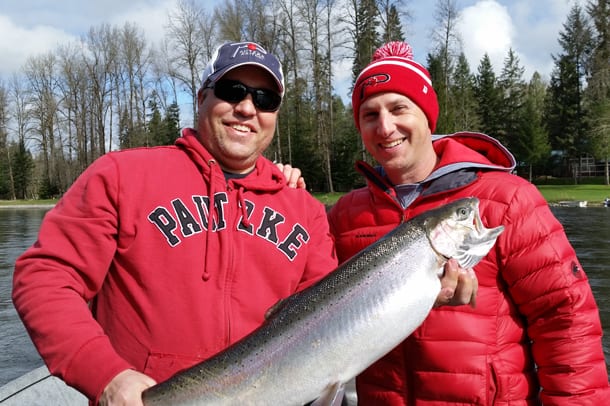 One thing that’s different this season is water flows. They are way below normal. For the past few weeks we’ve been fishing on 4,000 cfs, which historically is 6,000. The low water hasn’t slowed down our run, but perhaps spread our fish out.

Our water levels are at summertime flows. Given these low flows the steelhead aren’t going to race to the hatchery. They are literally spread from the hatchery to the Columbia River. That’s why guys are fishing miles and miles of river because they are so spread out. In year’s past all the fish would be within five miles of the hatchery. 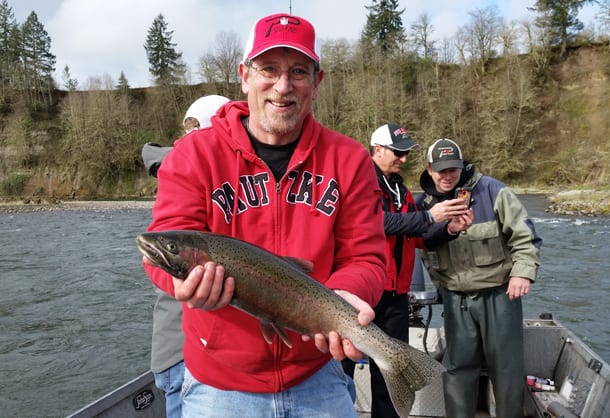 These fish are right on time, but they aren’t stacked up at the hatchery like they would be on a normal year. It’s all about water and we don’t have a lot of it this spring. With these reduced water flows the steelhead are going to be spread out over many miles so guys who like fishing and scenery are getting to see lots of river. They are taking their time to get to the hatchery this season and that’s not going to change in the next few weeks. I’m expecting the steelhead bite to remain solid into the middle of April and then it switches right over to spring Chinook. 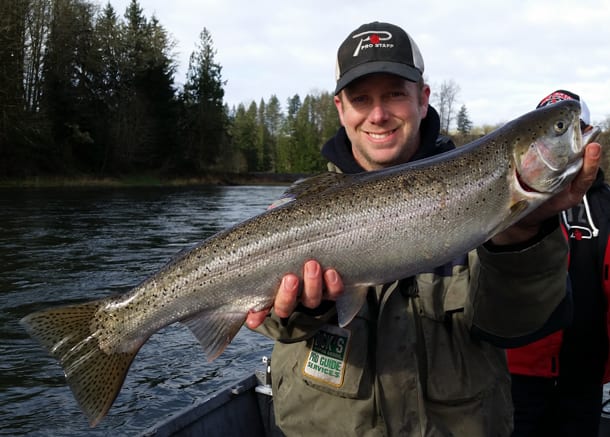 We’ll use bait and yarn daily, but I use yarn balls more for higher pressured fish. It’s a small presentation, generally, and you can make different colors fairly quick to see which colors are working. Keep in mind steelhead are sight oriented way more than salmon. Different colors trigger bites. Steelhead by nature are curious creatures and a big glob of eggs after they’ve seen 10,000 go by can be a tough way to get bit sometimes. 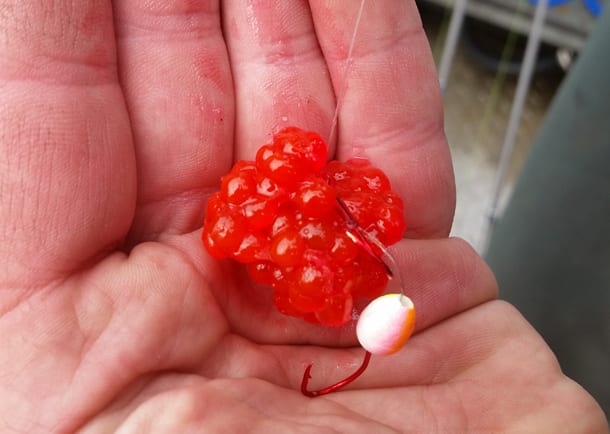 Normally, when I’m near the boat ramp where the majority of the pressure is I’ll use that smaller profile. There’s no exact science, but most of the time when I’m within a mile or two of the ramp if I have six rods in my boat four of them will have yarn and two will have bait. But, if I’m two miles from the ramp and less pressure we’ll flip-flop that and use more bait because those fish are less pressured. 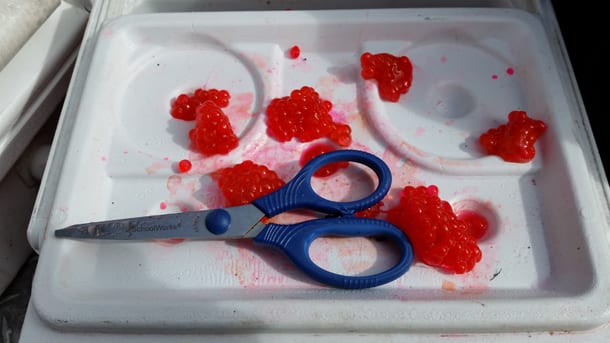 It’s no secret we scent our yarn heavily and often. My recipe includes

Pautzke Red Nectar, Atlas Mike’s Shrimp Oil and raw sugar, which I’ll mix to make it sweeter and thicker. Yarn balls are mimicking an artificial egg. When you dip it in the Pautzke Nectar that’s your egg extract, so now that yarn smells like an egg and it makes them go crazy. Adding the shrimp oil is something they naturally eat in the ocean and with the sugar, we all know steelhead have a sweet tooth. We dip yarn into this mix every few casts. 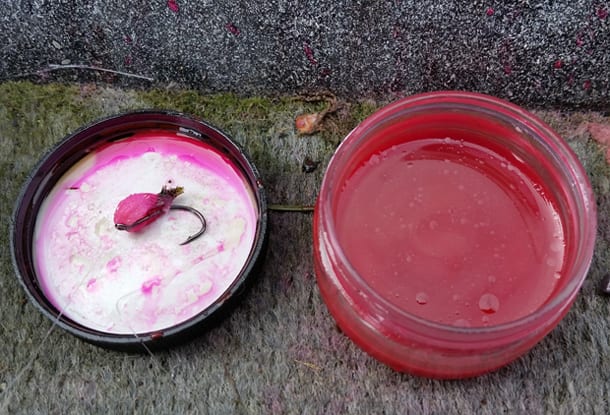