My favourite way to target salmon when they are staging is by float fishing! There is nothing as exciting as watching a float suddenly drop after bouncing across the water’s surface in deep stretches, with a big salmon hooked up on the end of your line. Float fishing with Pautzke-cured skein chunks may be messy, but it is a simple, effective, somewhat inexpensive, and a fun way to target our migratory trout and salmon species from shore. 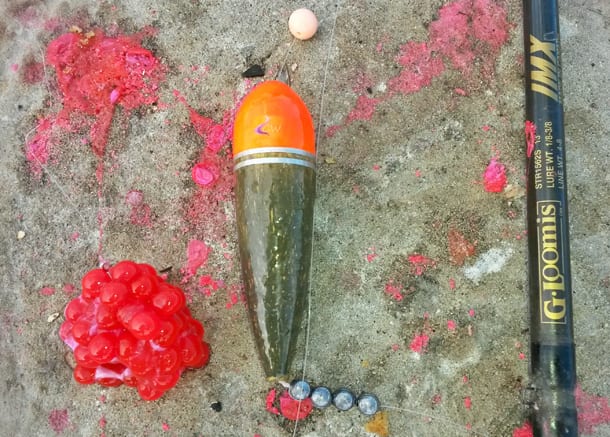 Alas, the long days of bearing krill-smelling, pink, red, and orange stained ‘Pautzke hands’ have just kicked in here in Southwestern Ontario. I’m sure all of our readers know what that means! 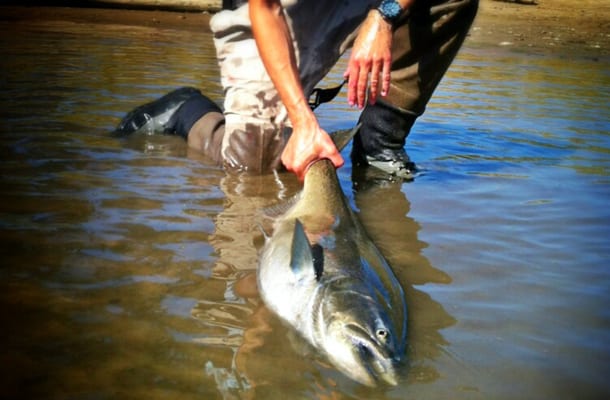 The egg fishing bite has picked up throughout many creeks and rivers, inside and outside of the GTA. In this FireBlog I’m going to give you the scoop on how to mix FireCure & BorX O Fire cures for sweet looking skein chunks, and break down the basics on how to rig up a float fishing set up to target salmon by fishing colourful chunks of skein.

Chinook and Coho salmon have started to run our rivers in good numbers after a well-needed rainfall we had that kicked things off in the beginning of September. Thousands of salmon, followed by the first few running trout, quickly began to flood our river systems after a long wait staging out in the main lake. Anxious and sleepless, as usual, like a little kid before Christmas Eve, I found myself back in the ‘lab’ preparing chunks of fresh skein for upcoming outings on the water once again. 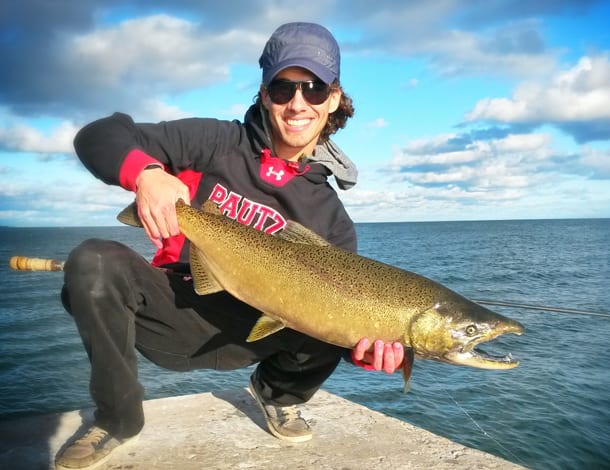 This time of the year, I like to use bright colours, even in crystal clear conditions, to get these fish going. Salmon are aggressive fish and they are not afraid to crush bright/unnatural presentations that most anglers will not have confidence in. A mix of Red Fire Cure and Pink BorX O Fire ‘seasoned’ generously on fresh skeins has been the ticket for me, but I’ve seen my friend bank a lot of fish on natural and orange coloured cures.

When preparing my skein chunks, I like to start off by gently spreading the skeins open, minimizing the chances of any eggs falling off the membrane. It is important to have as much membrane as possible attached to your eggs when skein fishing so that you can bait your eggs well on the hook. Once the skeins have been opened up, I like to cut them into fair sized chunks and lay them separately across paper towels. Once you have all your skein chunks laid out, they are ready to get cured.

First, I will generously sprinkle Red Fire Cure over my skein chunks, which have been laid out individually. The next step is to do the same, except with Pink BorX O Fire sprinkled over the Red Fire Cure. 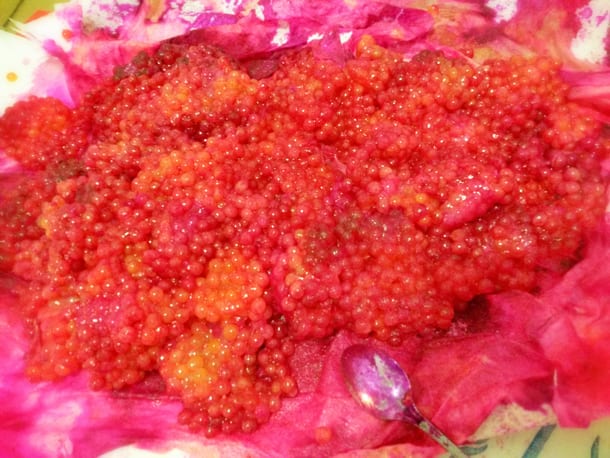 Once that is done, I grab all four corners of the paper towel and gather all the chunks into one pile, mixing them so they all get coated in the cures evenly. After that step, I lightly sprinkle one more round of Red Fire Cure and Pink BorX O Fire over the pile and I’ll mix them one last time.

The last step is to put all your eggs into a bag or a container to let them soak up and cure for several hours. I like to use an industrial sized Ziploc when it comes to this storing and carrying the cured skein chunks out on the water. 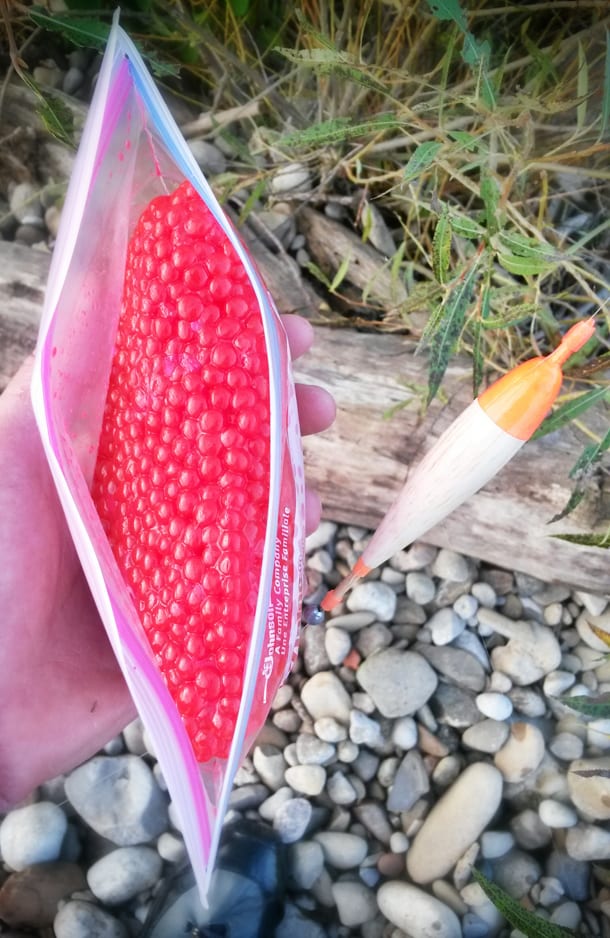 The curing process takes about ten minutes, and your Pautzke cured chunks will be ready to fish in about four hours if you want to fish right away. However, letting the eggs cure longer will result in better eggs, and if you air dry the skein for about a day, the membrane will be much tougher than a wet cure. Once you have got the fish candy ready, it’s time to rig up and hit the water. 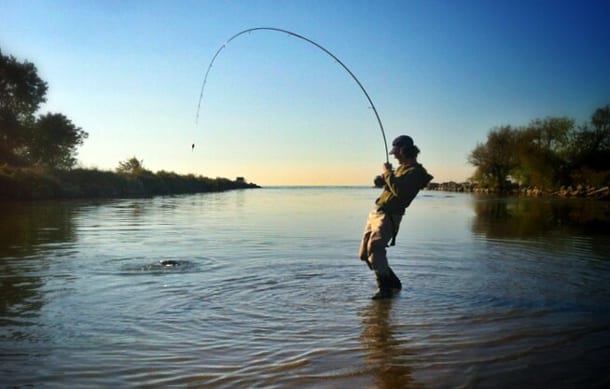 *        *6-20 gram floats, slip or fixed (use float sizes accordingly with the size of the water you are fishing, river currents,  skein chunk, and water depth)

*        *spider thread to fasten skein chunks onto your hook 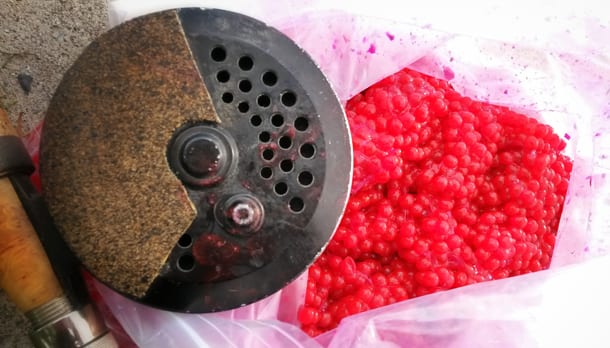 Rigging up takes no time and is simple even if you haven’t float-fished before. Here is a quick step-by-step procedure on how to get set up. 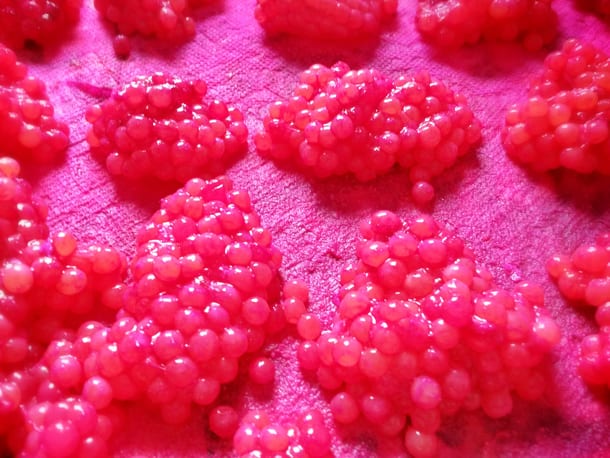 When our creeks and rivers are low in the GTA, salmon school up and hold in deep stretches, which are generally found near river mouths, waiting for the next good rainfall that will help them swim up to their spawning grounds. These conditions are ideal and they are in your favour when planning to target salmon by float fishing with skein chunks since these fish are not on the move.

A good skein fishing presentation is just off the bottom drifted under a float, however these fish are aggressive and they’ll take tasty Pautzke skein chunks suspended as low as two feet under the water’s surface in deeper holes. To get in on the action, do some scouting around major tributaries/piers in and outside your neck of the woods and look for signs of staging fish (swirls, salmon jumping). Once you’ve keyed in on a few fish, put on a juicy skein chunk and keep your eyes on your float. 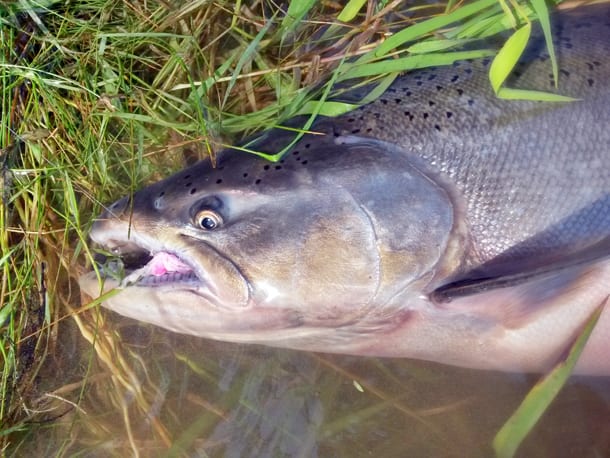 Skein fishing for salmon has been great for the past few weeks until it slowed down a little recently due to the lack of rain and cooler weather. In my previous blog, I have mentioned that it has been a tough year for salmon fisherman across the province because of the long and cold winter we had experienced. The warm, dry weather and sunny days we’ve had as of late kept many salmon at bay, literally, throughout many river mouths across the province. Another rainfall and some cold nights will get the rest of the run in the rivers, followed by the first good push of my favourite fish species to target in river: steelhead! 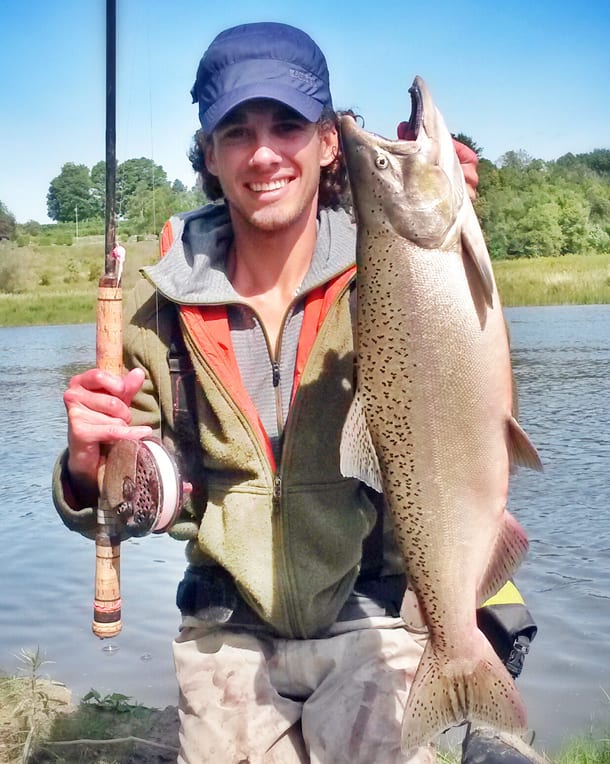 Til’ next time! Keep em’ bent! 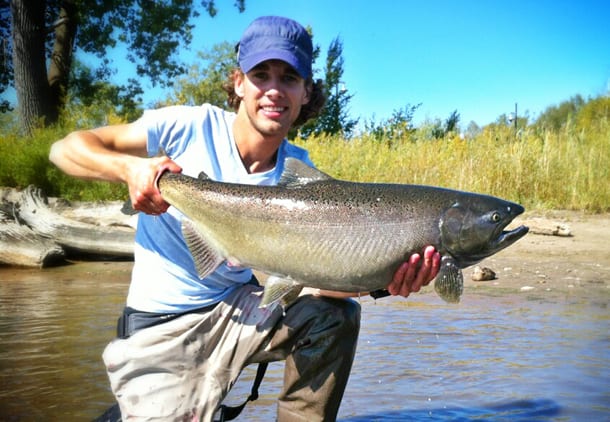