The Sacramento River is in the midst of excellent salmon fishing this season. Countless salmon are being caught drifting and back bouncing cured roe. It’s not a new technique. However, having quality eggs does dictate success. As a guide my clients demand absolutely perfect eggs daily. I use Pautzke Fire Cure as the vehicle to maintain constant success, even in the high-pressure situations we find ourselves in daily. In this blog I’m going to explain exactly how I cure eggs for Sac River success. 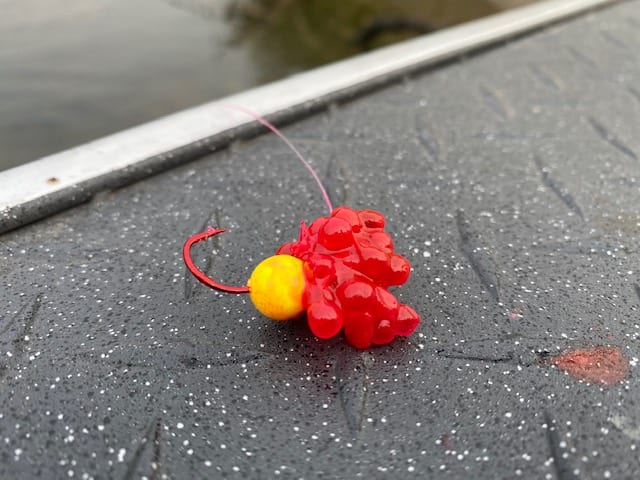 For the Sacramento River I want a heavy milking egg and an extended milking egg. This means if you cast and make it through a short drift you can cast that same egg again and it will still milk out and put more scent in the water. For the extended milking egg you’ll notice when they the eggs hit the water you’ll get a cloud of milk even after that first drift. That’s what you should aim for. Not all cured eggs do this, but the recipe I use produces eggs like this every time. 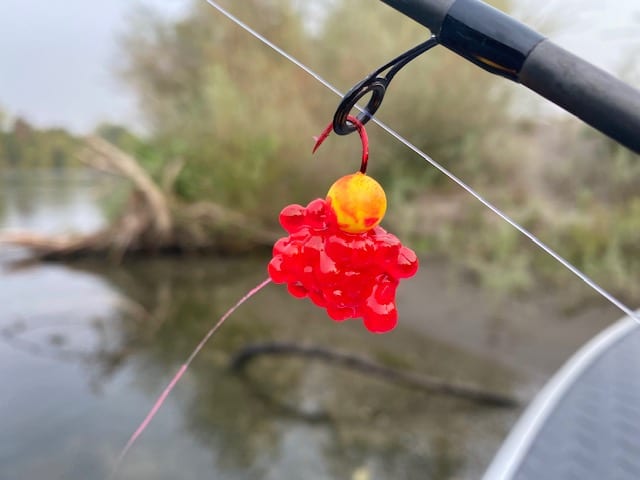 On an inland river like we are fishing it’s important to use a sulfite-based cure. We are fishing up to 260 miles from the saltwater, which is why sulfites are so important. After the salmon have been in the river for a period of time they develop a taste for salty baits again. I believe their metabolism craves the salt. Keep in mind they live most of their lives in the salt, which is why sulfates are so effective on kings over a borax based cure. Also, the sulfite based cure milks better. 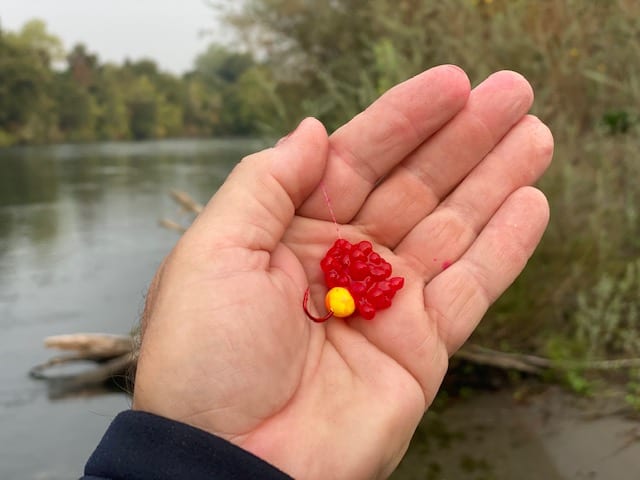 A quality egg starts at the point of harvesting a fresh caught female salmon. Upon doing so, it is paramount to properly bleed the salmon so that no blood remains in the fish or the egg skeins that are contained within. The best method for bleeding a fresh caught salmon is to immediately cut the gills and place the salmon back into the water, whether it’s in the net, fish box filled with water or in a bucket capable of holding a salmon upside down for a short period of time. Keeping the salmon vertical, with its head down, helps effectively bleed the fish and gets all of the blood to drain internally from the skeins. 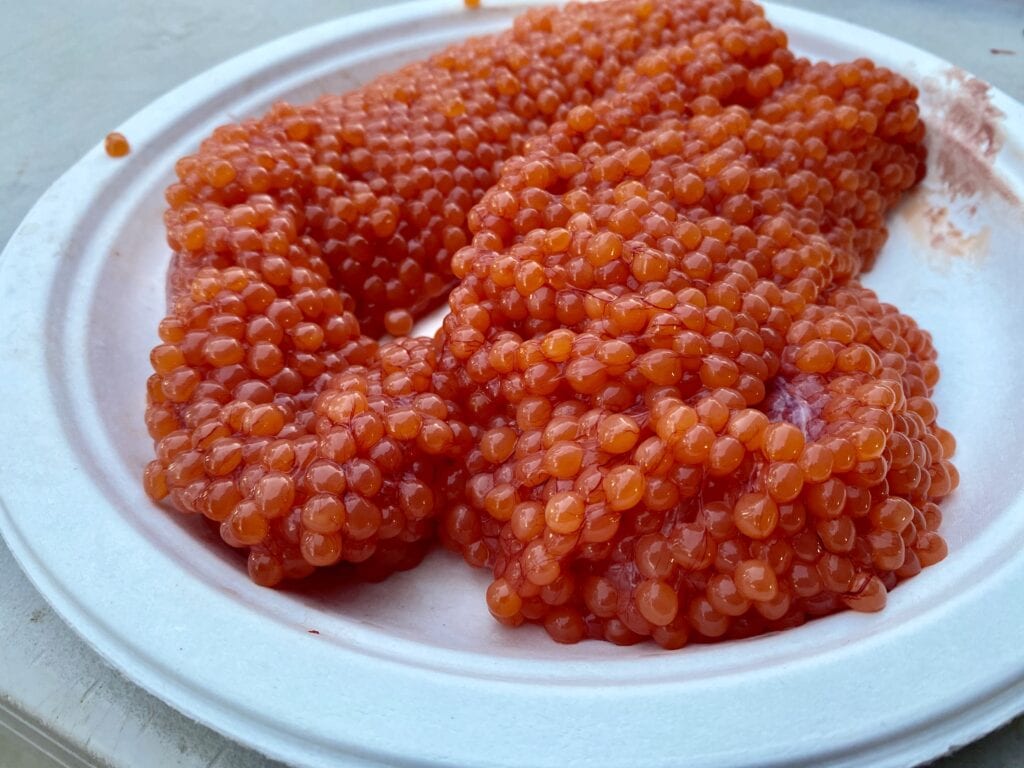 Egg extrication is an important task. Be mindful when cutting the belly of the salmon. If the knife penetrates too deep, you will likely cut the membrane of the skeins and damage them before removing them from the fish. Once the skeins are removed from the fish place them in a plastic bag and keep them cold! Once you’ve got them home make sure all of the veins are blood free and keep them in the plastic bag in the refrigerator until you are ready to cure them. I recommend the eggs be cured within a few days. 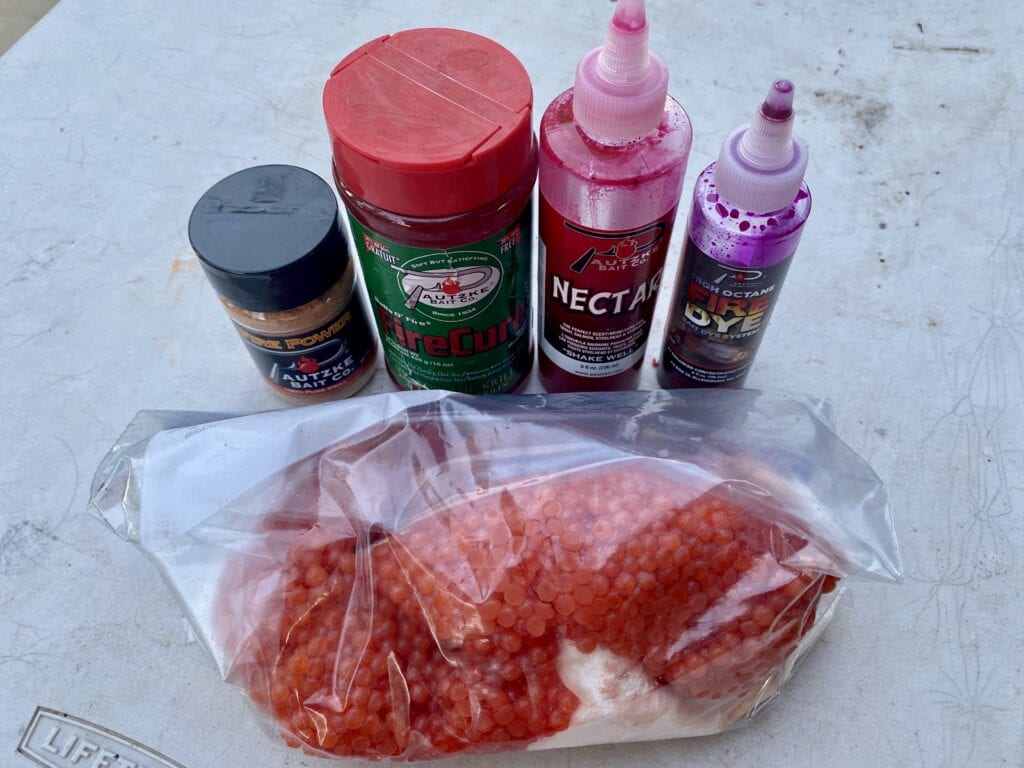 You’ll notice I use four products in this cure. This might seem like overkill to some anglers, but I’m going above and beyond to achieve the perfect egg. Any veteran egg curer uses many scents/additives in all their cures. Keep in mind these four items last through multiple uses. You are only using a small portion each time to cure them. It’s an investment worth making.

Applying Fire Cure is the easiest part of the egg curing process. Pautzke egg curing products are potent in a sense that they have lots of smells, flavors and bite stimulants that attract salmon, but not in a sense that a little too much of any product will affect the outcome negatively. A liberal amount of each of the four products I use will do a fantastic job of curing the eggs and creating a very fishy end result.

To achieve the perfect egg I shake a light layer of Red Fire Cure onto the butterflied skeins. I prefer red because Sac salmon like very red eggs. That’s why we take the extra step and use the Fire Dye, which you’ll learn about later. 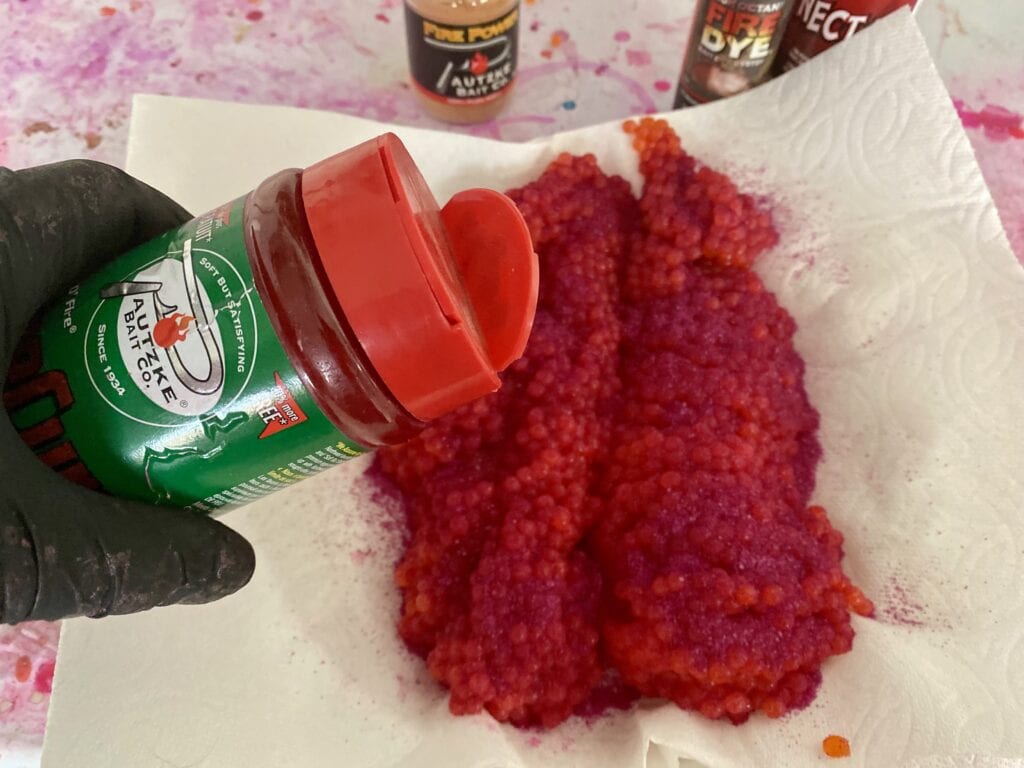 Fire cure is forgiving compared to many other cures on the market. You’ll read dozens of how to cure eggs articles that warn sulfite based cures can burn your eggs. Some cures can be too hot and you can burn your eggs, but I haven’t seen that in Fire Cure. People don’t need to be afraid to put too much on and ruin batches like they have in the past with other cures. What happens is they’ve had a bad experience with other cures and they shortchange themselves by not using enough cure in fear of ruining eggs. The result is the egg cure doesn’t work because they don’t put enough cure on. With Fire Cure there isn’t as many sulfites in it as some competitive products have so you can use an adequate amount.

After adding the Fire Cure shake on a light layer of Fire Power (krill powder) over the Fire Cure. Then I’ll lightly massage with my gloved fingers the aforementioned powders into the folds of the skein making sure to cover all exposed areas of the skein, both front and back. 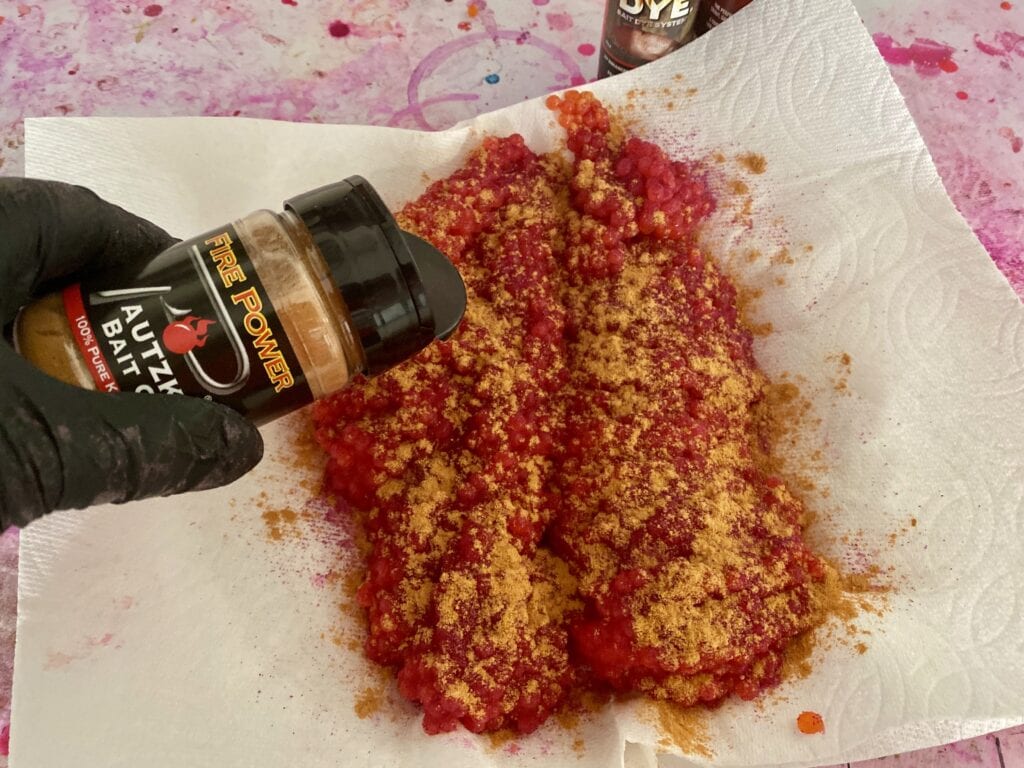 Most salmon anglers in the West know all about Fire Power. For those of you who haven’t used it, Fire Power is pure powdered krill. When incorporated into the initial curing process it puts some of the krill into the egg when the juices are absorbed back into the egg. Krill is a primary food source on the West Cost and something they’ve been eating for years. When the eggs milk out they are milking out the Fire Power and putting that krill scent into the water. The salmon love it. We’ve been using it for several years now and continue to do so because it works. 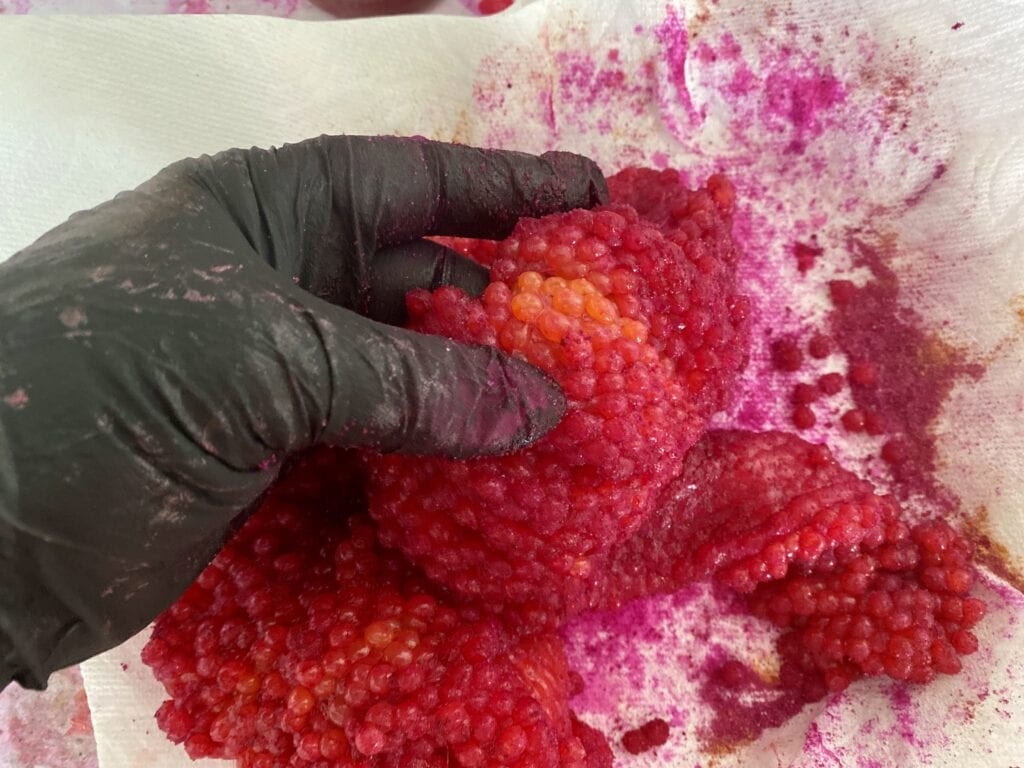 Nectar is a key component into creating an egg that’s a heavy milking egg. As an experiment squirt Nectar into a glass jar filled with water and watch the cloud appear. Keep in mind Pautzke Nectar is pure egg juice. It’s a bite stimulant and complements your egg cure. That red cloud is a scent bomb to salmon. Your eggs will work if you don’t add Nectar, but they milk even better with it. 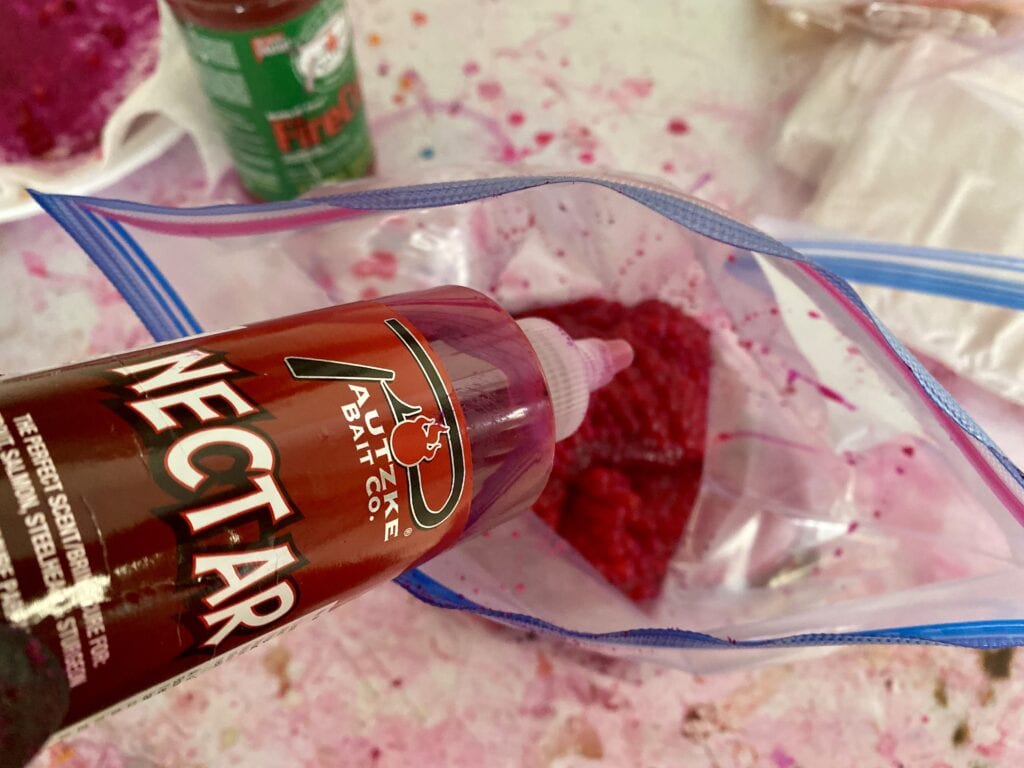 Another important thing about this cure is the dye. All egg cures have dye in them, except natural colors. Meanwhile, if you just rely on the dye within the cure it washes out more quickly that it does if you add Fire Dye. In many rivers the dye isn’t necessary. On the other hand in systems with heavy current, like the Sac, it’s imperative. Fire Dye is an underrated component of the cure and just using a little goes a long way. A squirt of dye allows us to maintain color in the cured eggs, even in the heavy current that we content with and more important – even after a few casts. 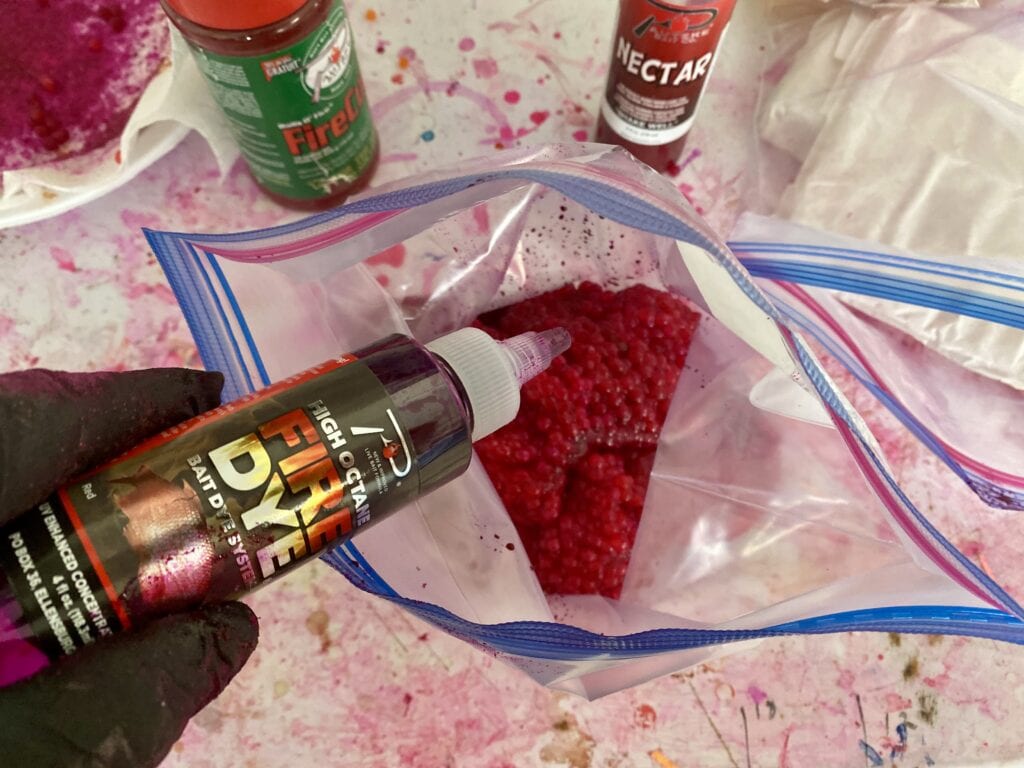 I then close the Ziploc and roll the skeins around for several minutes before placing it in the refrigerator. Every few hours, or as often as time will allow, repeat the rolling of the skeins in the baggie to ensure full coverage of the eggs within the cure liquids. I leave the skeins in the Ziploc refrigerated for 3-5 days. Once the 3-5 days have lapsed I will either prepare the eggs for fishing or place them in the freezer where I store them during salmon season until I’m ready to use them. 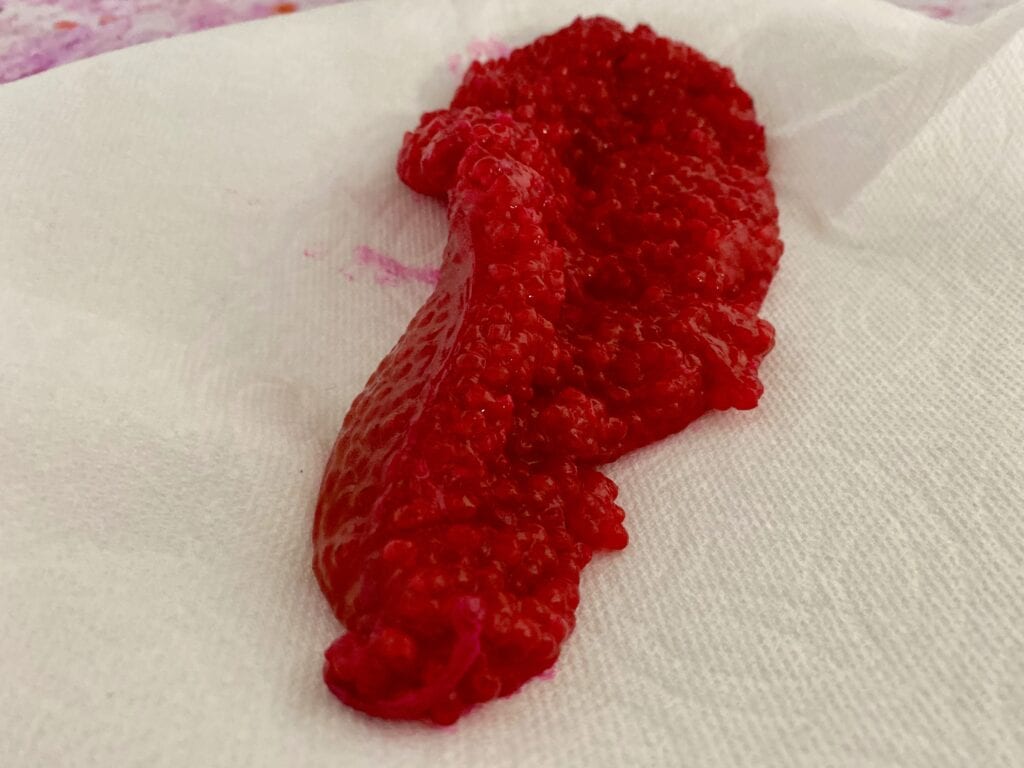 I prefer to use dime to nickel size, nothing bigger. You can use large pieces, but because we drag so much if you put a big glob on there it’s going to run down into the rocks and snag up. You don’t need big clusters rather a small cluster that’s going to stay on and milk heavy. 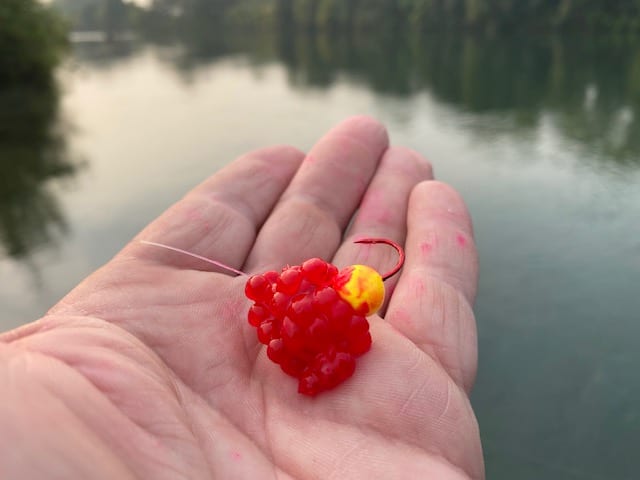