Learn How To Cure Eggs For Great Lakes Salmon

Learn How To Cure Eggs For Great Lakes Salmon

Michigan is a prime destination for salmon anglers across the globe. Every year when early August rolls around, I find myself itching to be on the river drifting chunks of skein and casting plugs for fresh Chinook salmon. Although the fishing for Michigan salmon can be great at times, it can also be very tough; especially while targeting early season Chinook. Having good bait and knowing what weather to look for plays a huge role in being successful.

Regions of the Great Lakes may be different, but for me living on Lake Michigan’s west coast, a north wind is what us river/pier anglers pray for. A north wind will flip the Lake Michigan water, bringing cold water temperatures next to the river mouths, and will trigger a push of salmon to enter the river systems. If you add a good rain on top of a north wind, then that is just icing on the cake to bring an even bigger push of salmon in. Any time you see a good north wind approaching on the forecast with some rain mixed in, it would defiantly be worth it to hit up the rivers.

River salmon can be rather tricky to catch and sometimes very easy. My favorite methods are casting Thunder Sticks/Rapalas and float fishing skein chunks and spawn bags. Salmon can be picky, so before each trip, I like to make sure I’m prepared with a wide variety of baits. I like to have a couple different colors of skein and spawn bags cured up and in different sizes. I’ll also like to have several different styles of plugs with me as well. Year after year, I find Fire Tiger to be my most productive plug color. Throughout the season, float fishing skein chunks cured in Pautzke’s Fire Cure and BorX o Fire proves to be my most productive method for catching big numbers of Michigan river salmon. 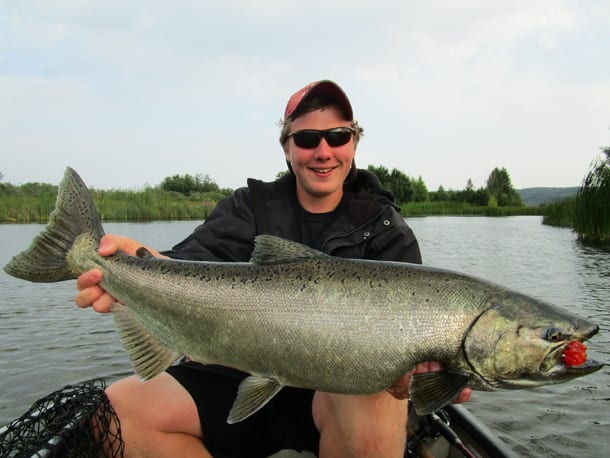 Over the last few years I’ve experimented with several different cure processes, but this year I think I’ve hit a home run. The cure process below has been producing phenomenal for me over the past couple weeks, and has had us hooking kings all day, even on the hottest and sunniest late summer days.

Here’s how I’m curing eggs this year, which is a bit different from what I did last summer and fall, but working well on Michigan kings. 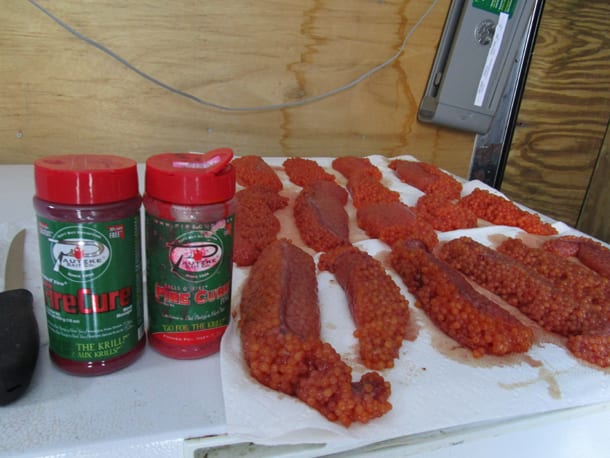 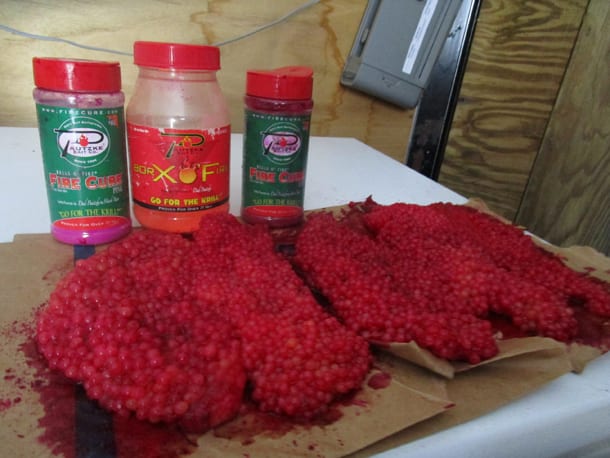 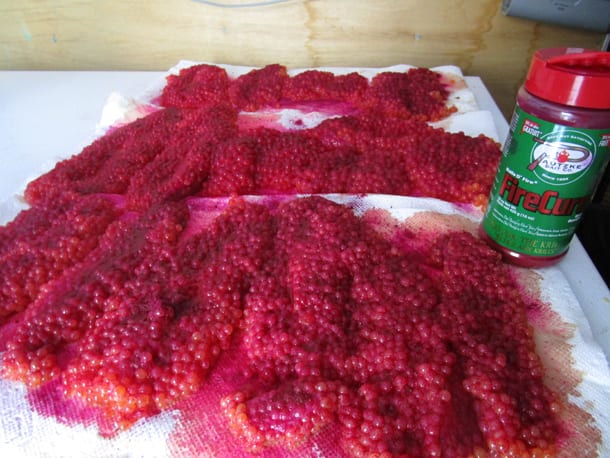 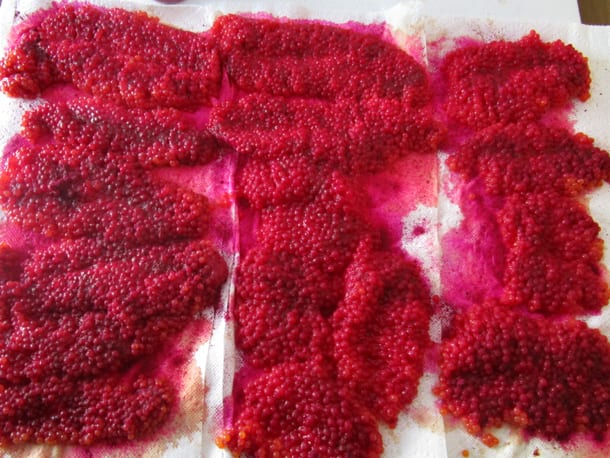 I’ve been very impressed with how well the cured skein chunks have been producing this year. I can’t wait to see how well they’ll produce the rest of the year. This cure saves a lot of time, effort and money particularly because you can get 15-20 good drifts out of each skein chunk, the eggs have good color, a strong scent and milk out well.

Although salmon are the most abundant species found on the piers and in the rivers during August/early September, you should also keep your eggs available for large lake run brown trout and the occasional steelhead that may grab them. Good luck to everyone on the water! Make sure to get out and enjoy the short-lived annual Michigan salmon run!