Similar to women steelhead and trout are indecisive. And, also like women, when you think you have them figured out their habits change, putting you in a humble state. This is why targeting winter steelhead and trout has become such a big passion of mine.

Meanwhile, every avid steelheader knows how vital is it to be equipped with a large variety of baits during the winter months especially. Extreme cold can put these fish in lockjaw mode. On the other hand, altering traditional baits can induce strikes. Steelhead/trout are picky and curious. Oftentimes, I’ll catch a fish on one color combination, then I’ll go through several other color combinations before I can get bit again. Having a wide arsenal is important in the winter. 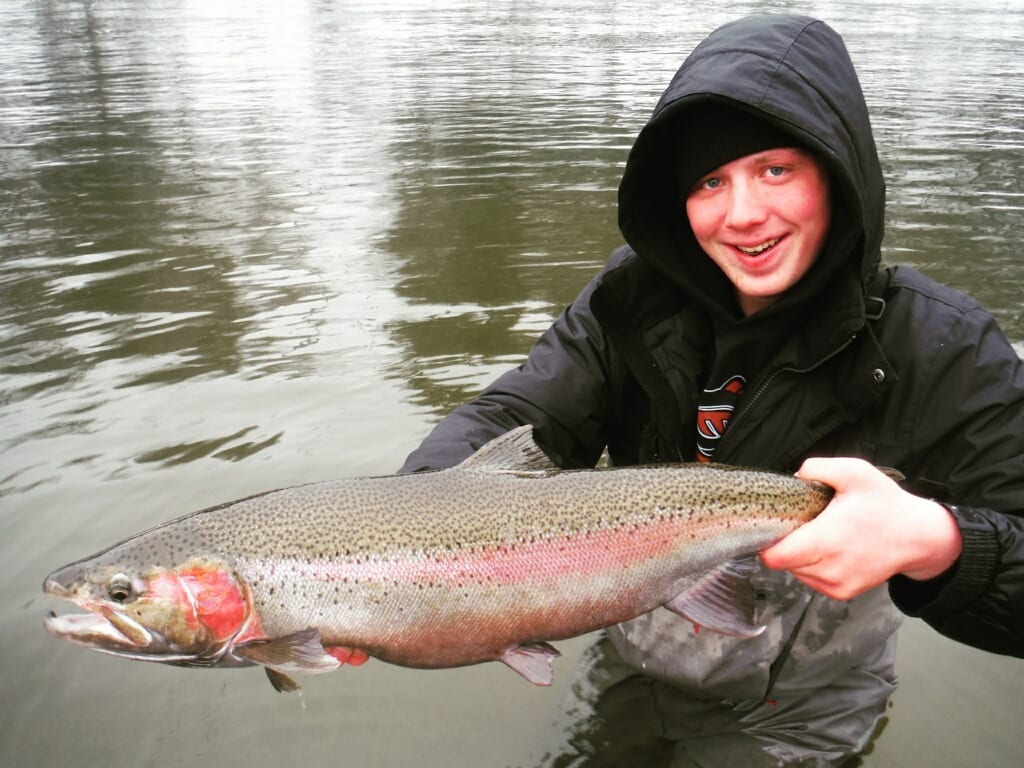 I’ve always been big on fishing spawn sacks and jigs in the Great Lakes. However, the last few years float fishing tube jigs tipped with colored and brined shiner minnows has proven to be one of my top baits. Heading to the river with shiners cured in several different colors of Fire Brine allows you to widen the scope of your offerings. Many times when you drift baits or colors that the fish haven’t seen it results in success particularly while fishing for winter steelhead and browns that have been holding in the river for long periods of time and been exposed to heavy pressure. 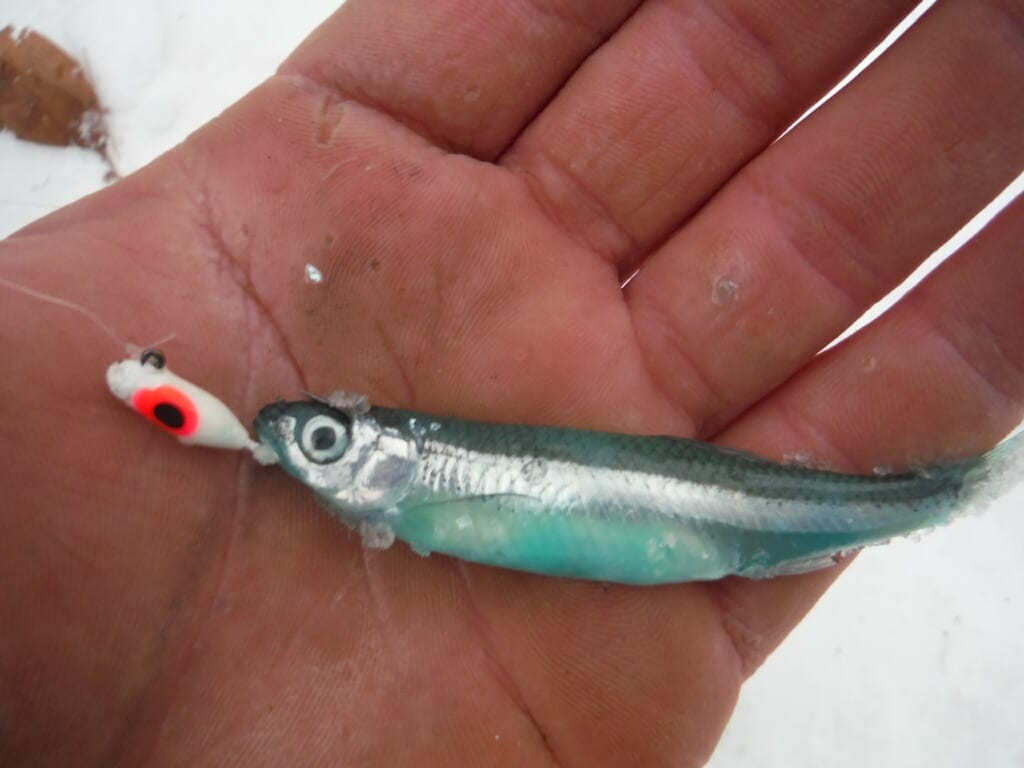 I like using shiners for a few reasons. Minnows are natural bait found in every lake/stream and under-fished. Steelhead, rainbows and browns are predators with a large diet and feed on insects, spawn and baitfish. I’ve found minnows to work best during the dead of winter months, but have had success with them in the spring and fall, too. 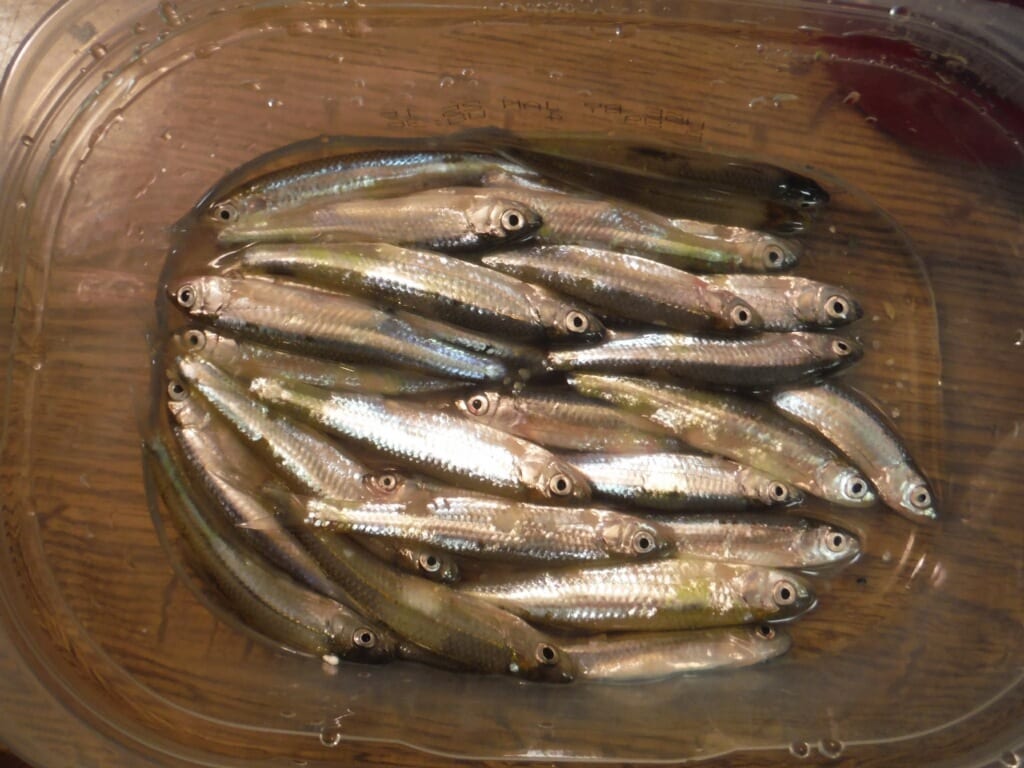 While I’ve seen anglers use many colors, chartreuse, pink, purple and blue have been the best producers for me. On the other hand, different colors produce in different rivers and conditions. Don’t be afraid to experiment with colors until you find what works best for the body of water you generally fish. The curing process is simple and can be done by anyone. It’s almost too easy. 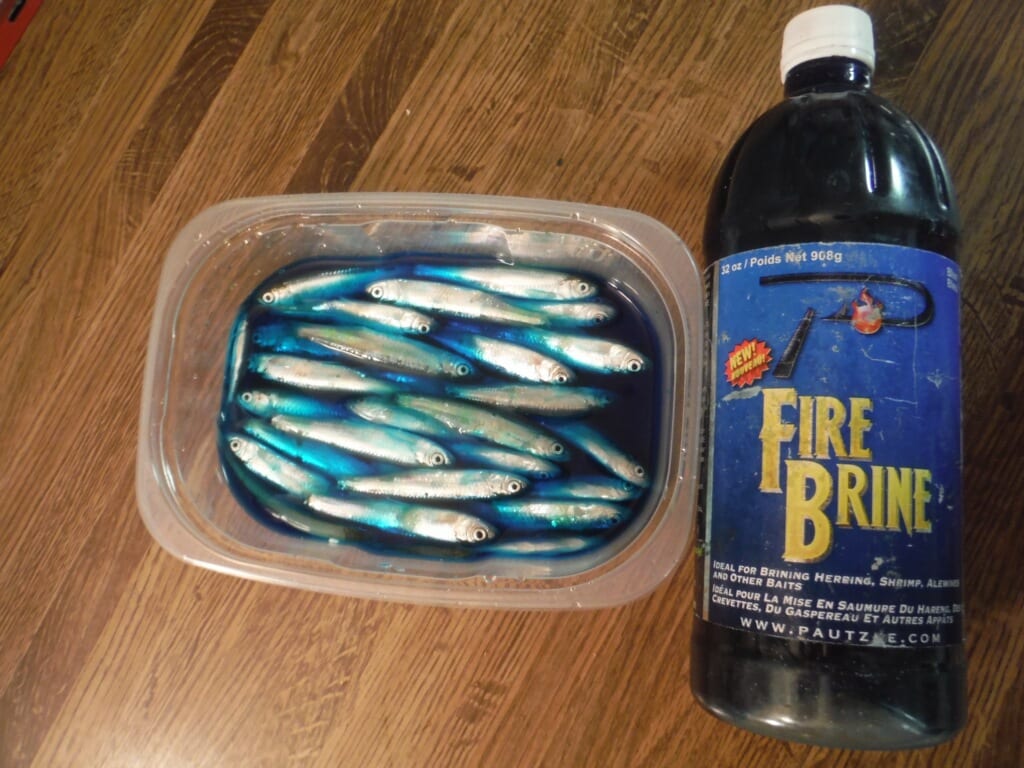 I’ve had success bottom bouncing minnows. On the other hand, the velocity of the current and structure found on the river bottom makes it challenging to keep the minnow on the hook. Therefore, I like to fish them on jigs because the weight of the jig keeps the dead shiner sitting upright and helps drop the minnow down quickly to the targeted depth.

When fishing dead minnows I use the same jig heads that I’d use for float fishing wax worms or spawn. Jig heads attract fish too. Therefore, colors can make a big difference. It’s important to hook the minnow through skull, right between the eyes. If the hook it through the side it falls off the hook easy when casting or with false hook-sets. 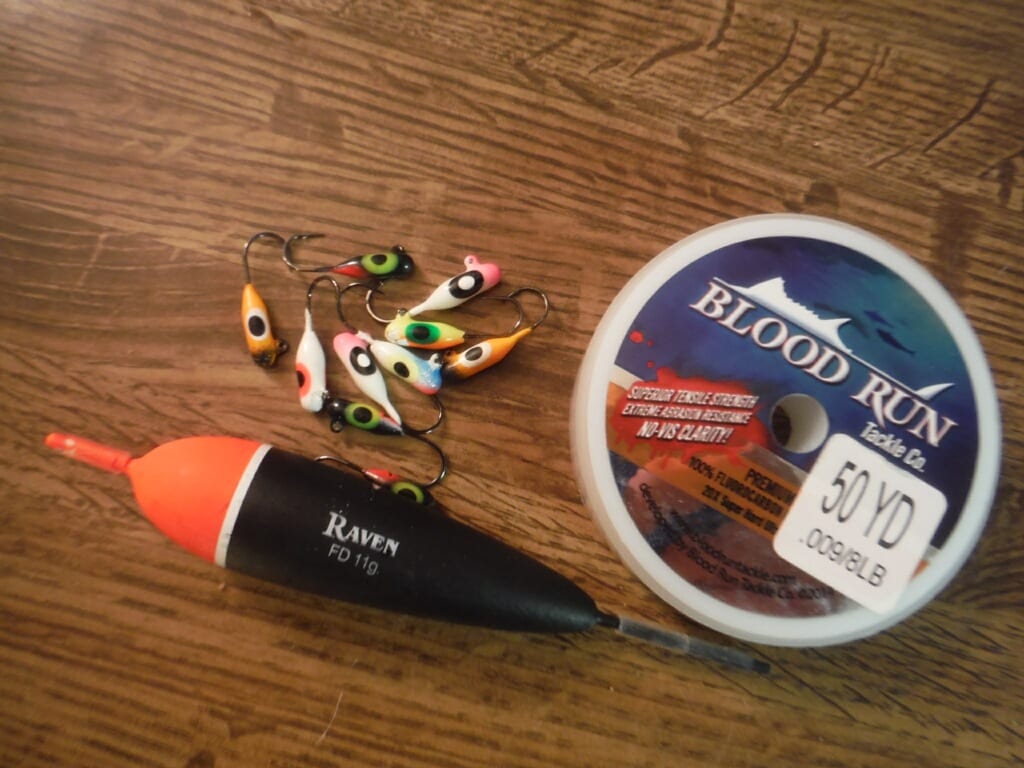 Place minnows in Tupperware container and fill with desired color of Fire Brine so all the minnows are exposed. 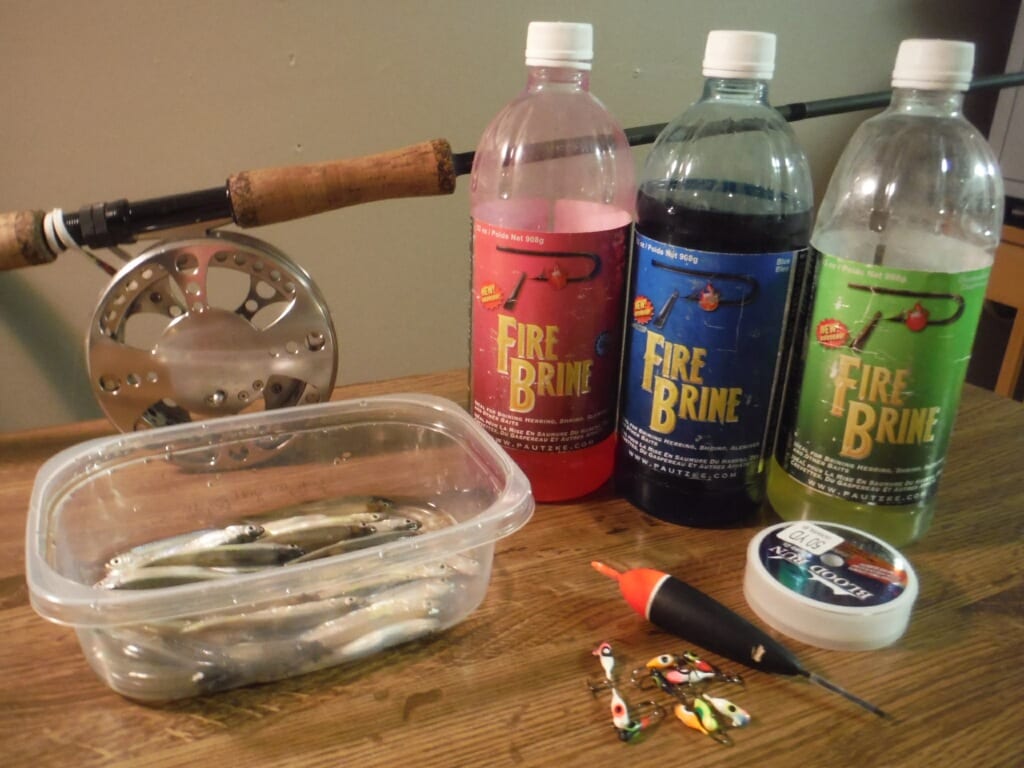 Let minnows soak in the Fire Brine for 24 hours in a cold environment. 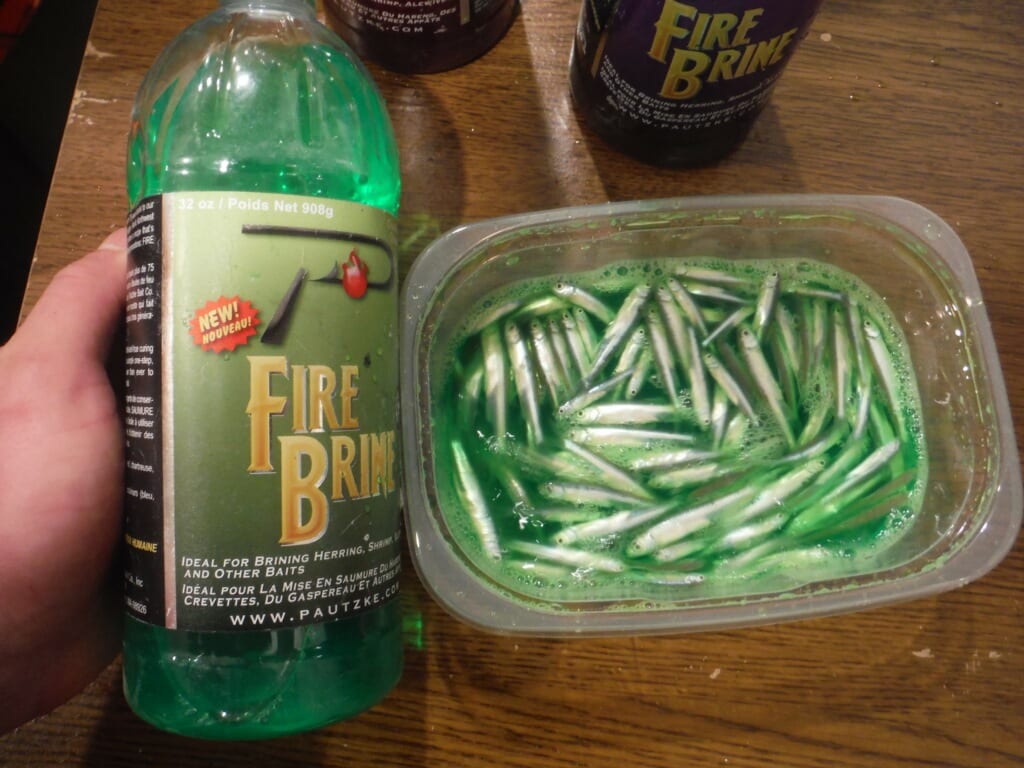 Remove the minnows from the brine. They’re ready to fish.

If I plan on using the minnows for several days, or longer, I air dry the minnows for a couple hours in a cool environment and then add a layer of salt over the minnows. This helps preserve them and extends durability. Once the minnows are salted they can also be frozen.

While float fishing shiner minnows it’s important to make sure they’re hooked well and you’re gentle while casting/retrieving. I love to fish shiners with light line on my 13′ ML centerpin rod/reel combination. The centerpin reel and long rod with light line (8-10lb test) allows you to make a longer cast with less effort. It will also give you a huge advantage while maintaining a long, natural drift through a hole. (As explained above) I hook the minnow just inside of the jaw and through the tough part of the skull.

While fishing jigs with shiner minnows match the general color pattern of the jig with the color minnow you run. I’m consistently surprised by which color patterns get bit some days. Don’t be afraid to experiment with some odd color combinations as well. Like I said, I’ve seen it many times when it’s all about giving the fish something the haven’t seen.

Throughout the winter months Fire Brined shiners float fished on standard tube jigs continually prove to be one of, if not my best producing bait for not only steelhead and trout, but all species that can be found in Great Lakes rivers and streams. This is a simple and effective way to fish. These colored UV shiners draw the attention of the most lock-jawed fish that thought they’ve seen it all! 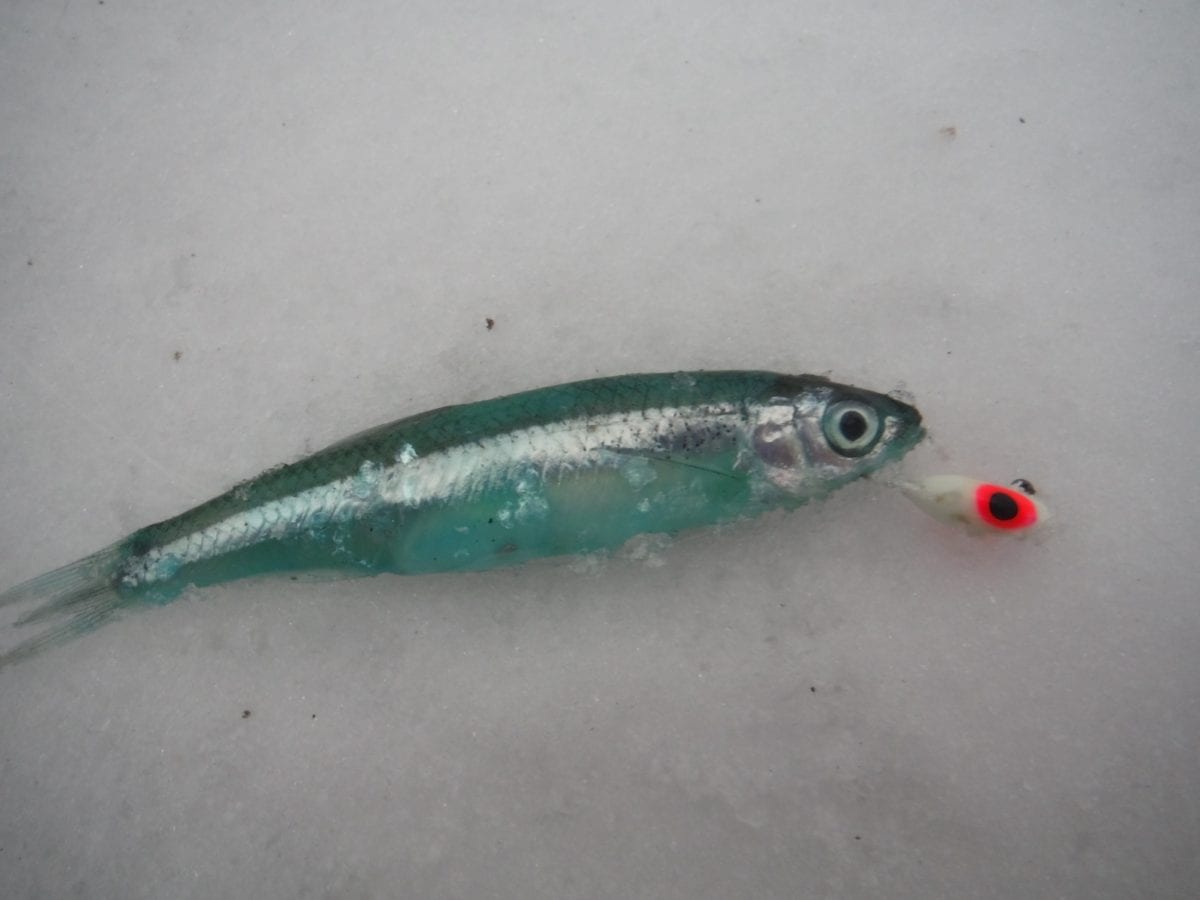