While first creating Fire Dye to use on West Coast cut baits the evolution of it has stretched further than we could have imagined in the last year. To date, the hottest application is applying Blue and Chartreuse Fire Dye to live minnows and worms. After more than a year retooling the formula in the Bait Lab we’re dialed in.

Meanwhile, being dialed under controlled conditions wasn’t the goal. To prove the product worked outside the confines of our Ellensburg, Washington, factory we searched for a popular system that would enable us to test Fire Dye in public. In the last three weeks we’ve hopped around the East Coast from Lake Erie tributaries, to South Carolina’s mountainous rivers and to the edge of the coalmines in Southwest Pennsylvania and had consistent results. However, I wanted to see how it would work on a system that received a tremendous amount of pressure and during poor conditions. 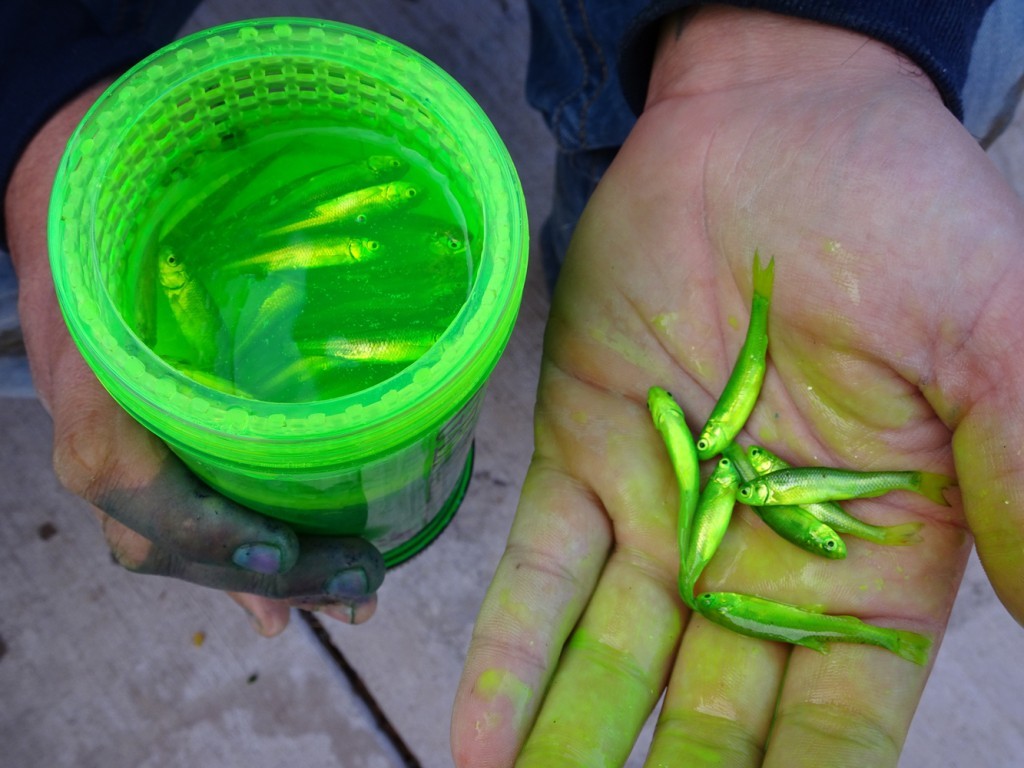 (Above) Chartreuse Fire Dye minnows. The ones in the canister aren’t dead, rather swimming in a circular motion.

This brought us to Central Pennsylvania’s well-known Spring Creek. Spring’s trout are harassed as much as any in the Northeast, possibly more. Over a half-mile stretch dozens of fly guys wade and stand inches from where the trout are resting in holes and swing fly after fly at them. Those anglers are followed people tossing spinners, spoons, worms, eggs and dough baits. The trout see everything, but hadn’t seen live Fire Dye worms and minnows before. 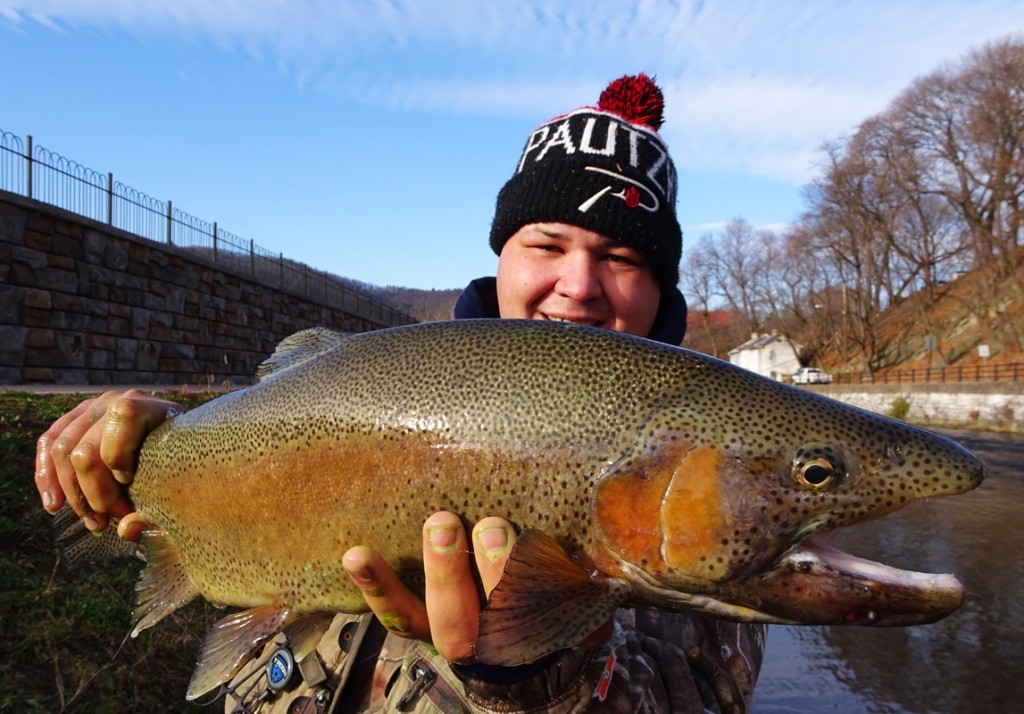 To complicate things the barometer was yo-yoing the week we fished. According the anglers we spoke to in the parking area (fly and spin guys) the fish weren’t feeding. High and low pressure were battling each other. We chose to start fishing at noon after a late breakfast and combing the region for live minnows, which can be a chore to find this time of year. The sun was high and the trout had already seen endless offerings. 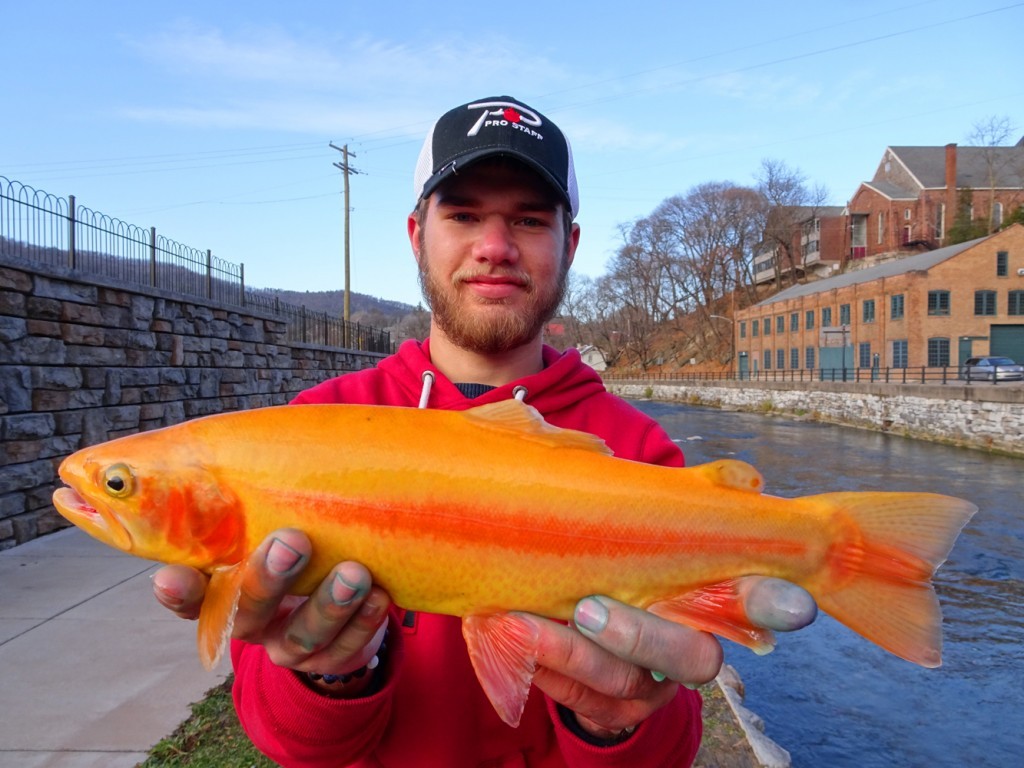 Still, I was pleased. This was ideal and would tell us if these baits worked. I invited Joey Usher of SWPA Fishing and Isaac Zettle of Zettle Outdoors. They did all the fishing, but requested to bring along jars of the new Natural Deluxe salmon eggs, in case the dyed baits weren’t effective. I agreed and I think both had a jar stashed in their pockets (even if I wasn’t going to approve of it). 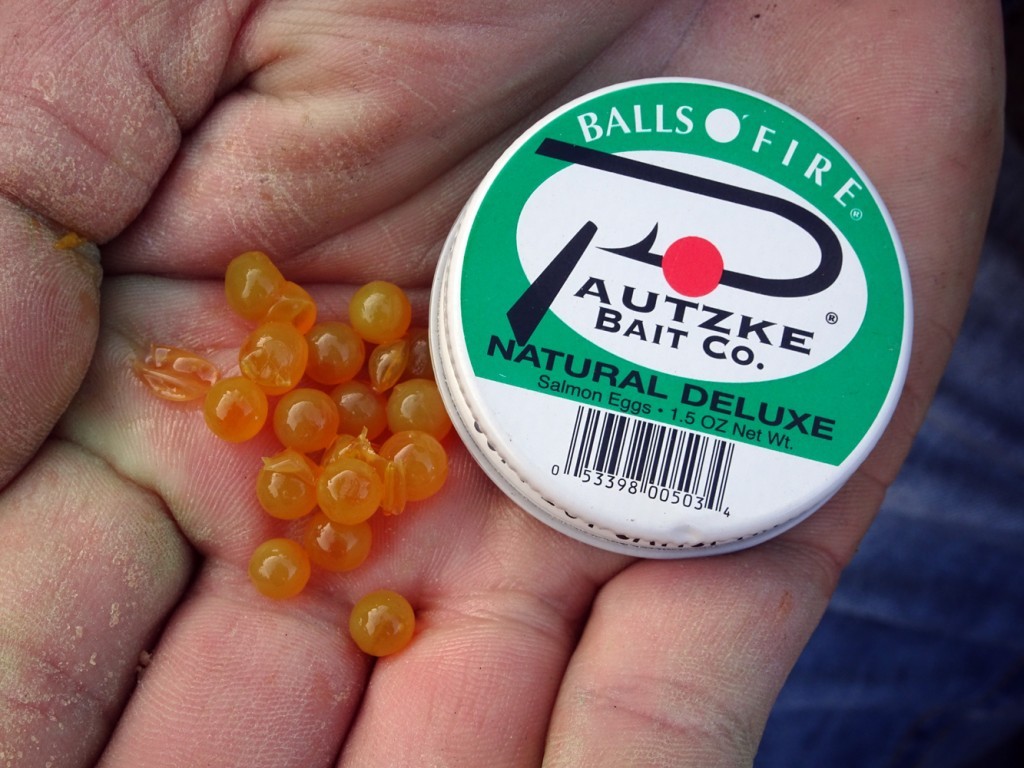 We parked, grabbed a small minnow container and squeezed a little more than a half bottle of Chartreuse Fire Dye in one and a fewer than a half bottle of the Blue Fire Dye in the other. The blue had about two-dozen minnows in it. The chartreuse more than three-dozen. We walked down to the stream, rigged up, grabbed the cameras and after roughly 30 minutes the minnows were lively (although much smaller than we wanted) and had turned blue and chartreuse. None had died. All had changed color. 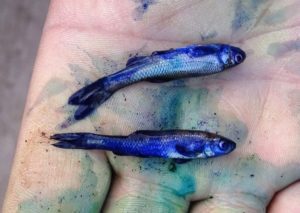 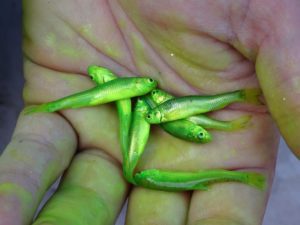 (Above) Live Fire Dye minnows after an hour soak time.

Unfortunately, the bites didn’t come quick. The first hour was dead. We didn’t get a single bite from a trout bigger than nine inches. Having seen other anglers hammer on these trout before we started fishing I was a little worried that this experience was going to backfire. On the other hand, Zettle and Usher didn’t give up. I think these two would be happy fishing all day even if they didn’t catch anything. After the first two hours (at about 2:30 pm) persistence paid off. Between the two we landed more than a half-dozen golden rainbows, one sub 10-inch brown and rainbows up to seven pounds. We didn’t see another fish caught. As the anglers we chatted with in the parking lot mentioned; they had lockjaw. 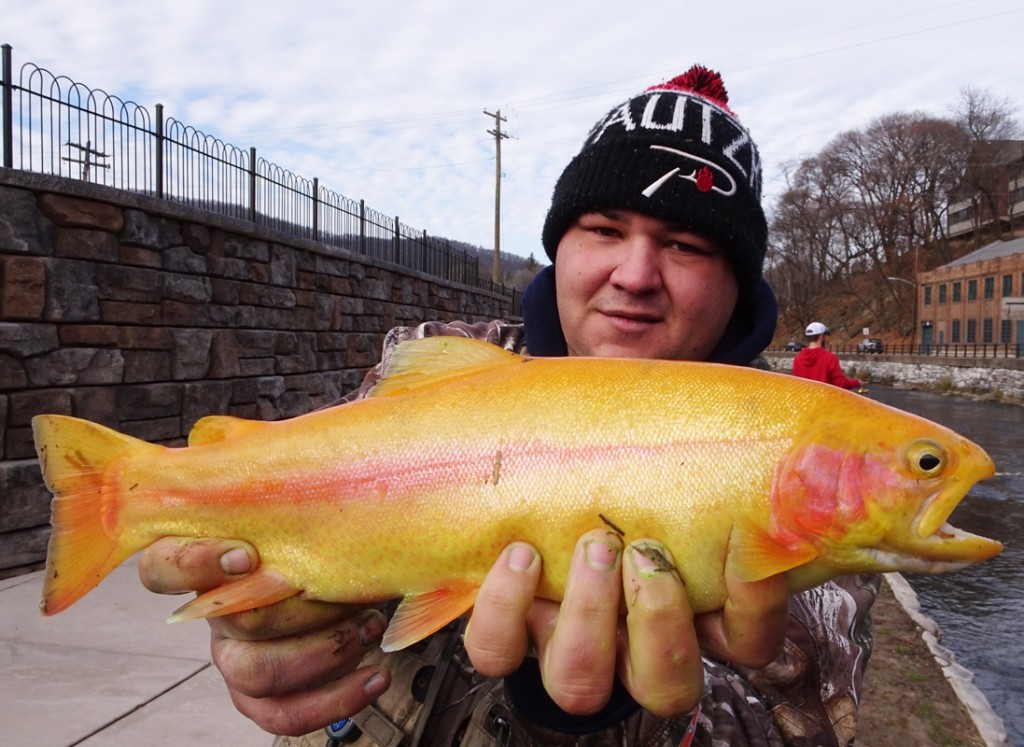 Using four-pound test we switched back and forth between Natural Deluxe, Fire Dye minnows and only Chartreuse Fire Dye worms (this was working so well that we didn’t need to try the blue on the worms) and caught more than a dozen trout all captured on video while filming Pautzke Outdoors. These weren’t small planters (the Pennsylvania Fish & Boat Commission doesn’t plant the creek, although the city does stock the golden rainbows upstream) rather picture quality fish and proof the Fire Dye does what we dreamed it would. 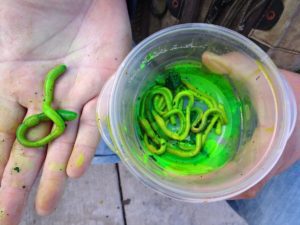 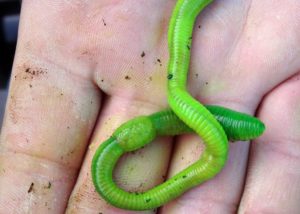 Editor’s Note: Fire Dye is available in store and online from retailers in the US and Canada. Chartreuse, Gold, Blue and Red are suitable for live bait. 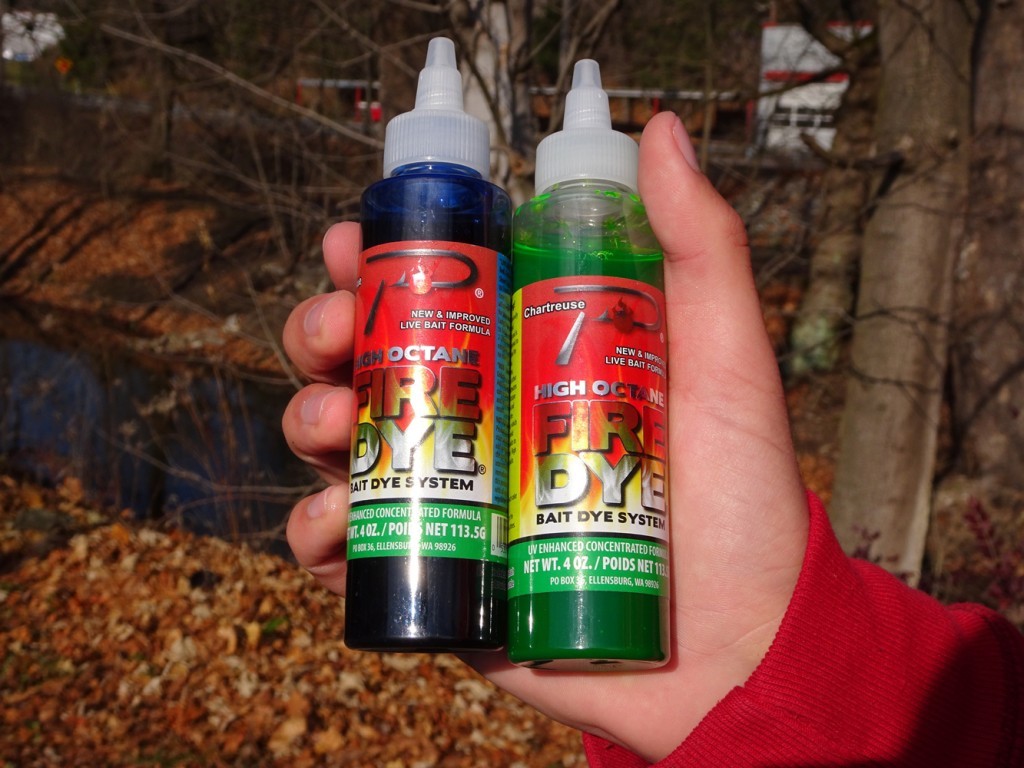