First timers are intimidated by the Tuckasegee River. Roughly and hour from Asheville and steps from Cullowhee, “The Tuck,” as locals refer to it, is one of the better known trout systems in Western North Carolina. Intimidation stems from its size. This isn’t a small stream, rather a medium size river that maintains healthy populations of trout.

Springtime marks the best action on the Tuck. In fact, we’re gliding through the peak now. The river was planted last week by the North Carolina Wildlife Resources Commission and will be stocked again in early June. For the next month action should be consistent for rainbow, brook and brown trout. 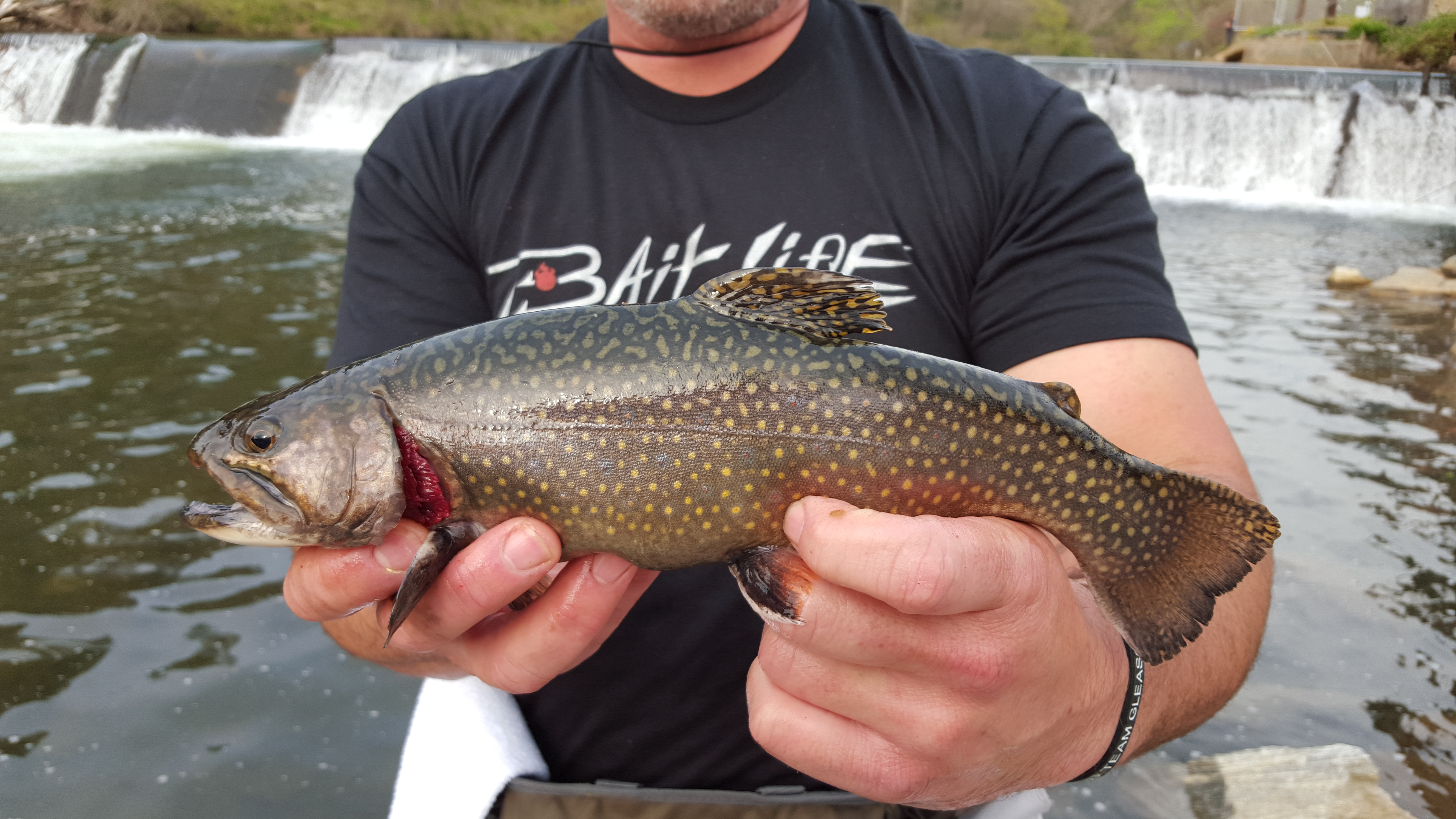 We’re bait anglers and focused on the section of water above the delayed harvest area where all methods are applicable now. Keep in mind, the delayed harvest section opens the first Saturday in June to bait and retention. Meanwhile, until then anglers using bait will have to fish in the hatchery supported section, which includes many miles of fishable water.

The Tuck shouldn’t be overwhelming. Anglers who want to cash in on recently planted trout should focus on anywhere public access is available. This includes one of the most heavily stocked spots where Caney Creek meets the Tuck, and also where Moody Bridge Road crosses the river on upstream for a few hundred yards and then downriver at Lena Davis Landing. Of course, there’s an endless number of other spots where anglers can find good trout fishing and access, but these are the more notable. 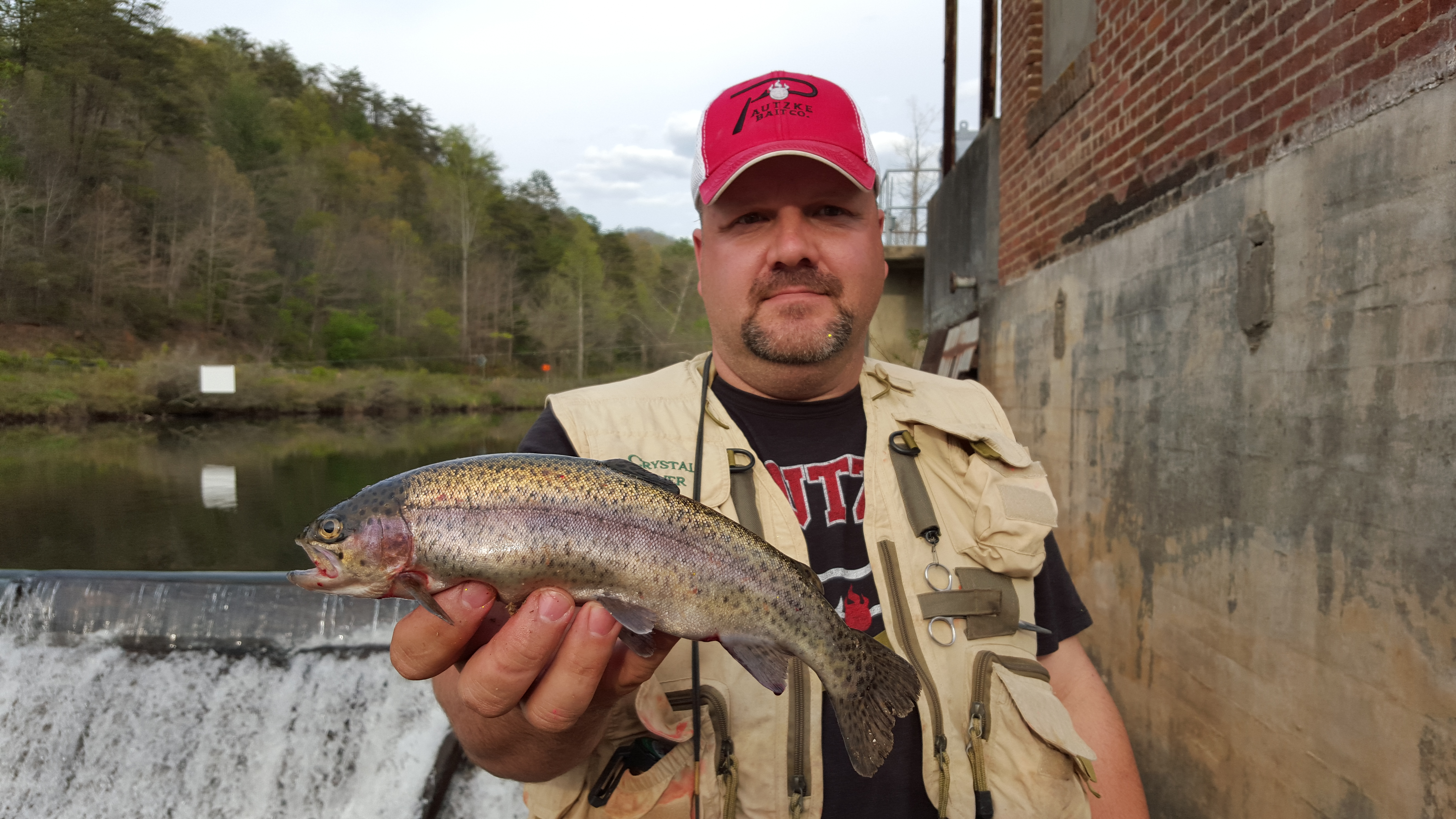 Finding trout shouldn’t be a chore, even for first timers, like we were. Action will likely be centered in large holes, at the end of tailouts and in runs. This time of year trout will be more spread throughout the system since the state has been stocking for a few months now. Otherwise, you can expect to find trout in areas that are easily accessed from the road. Oftentimes you’ll find congregations of trout in big pools below small dams and near bridges where the stocking truck can easily release big numbers.

We arrived to the river and met the local game warden, who was a heck of a guy. He explained that the river receives a tremendous amount of pressure and couldn’t be more popular. He also chuckled that we flew in from the Northwest to fish one of his local systems. We aimed to make a mark, and we did. 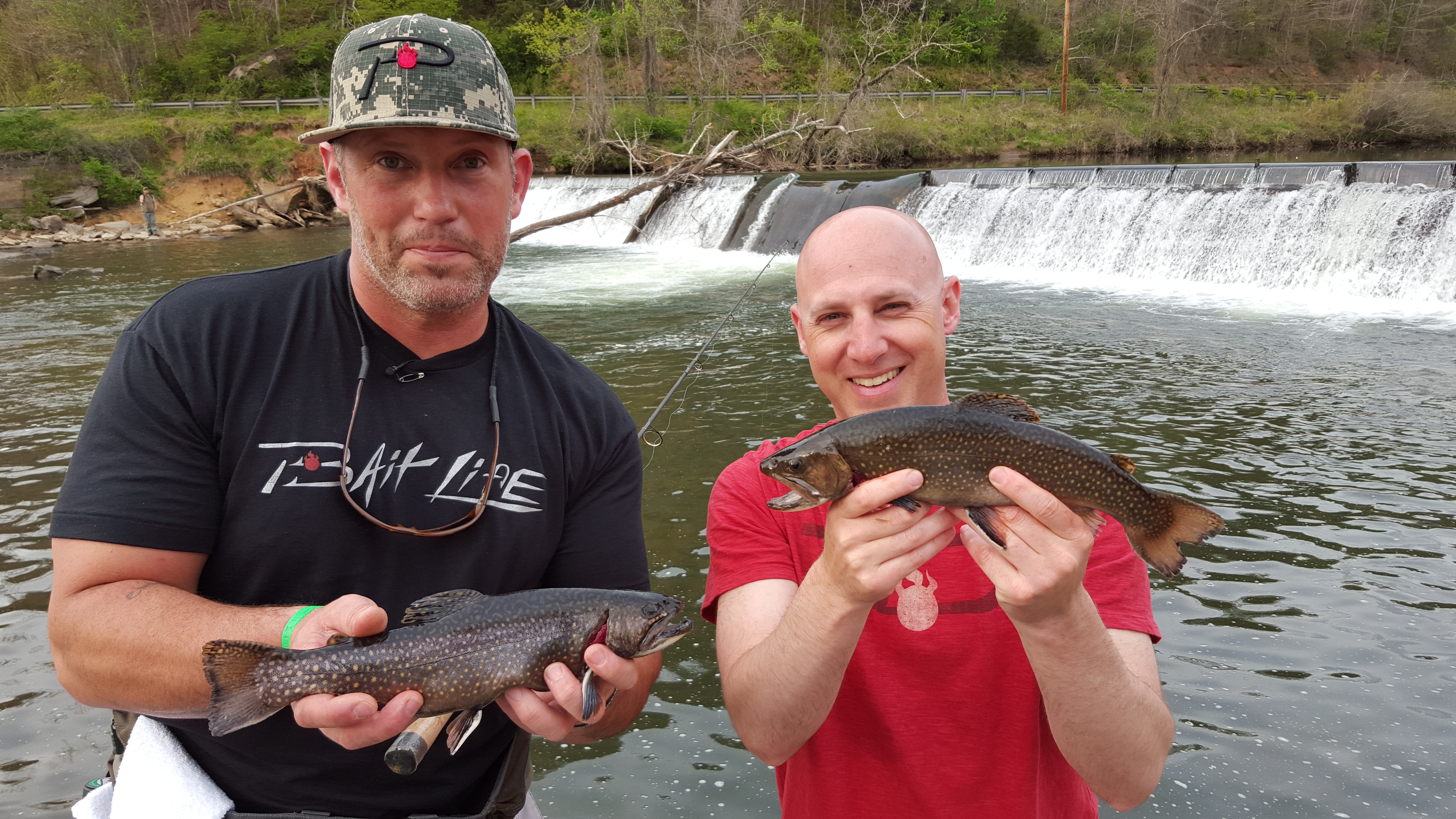 Unfortunately, after talking with the warden for a few hours and touring the area, we didn’t start fishing until 5pm, which didn’t leave us much time to fish. However, being from out of the area we had to tour the river, check out local fishing tackle retailers and stock up on Bojangles sweet tea. Fortunately, we had a trunk full of Fire Bait, and while the locals told us the bite had been off for a few days, we caught and released several dozen trout and kept a few for the grill, all on Fire Bait, all in two hours before sunset.

After the first 30 minutes anglers who were using other dough bait grabbed a few jars from us and also got in on the action. Our success came on Peach Garlic, Rainbow, Garlic Salmon Egg and Chartreuse Garlic Fire Bait, all fished on four-pound Trilene and an Eagle Claw (non snelled) hook. Normally, we use a sliding sinker rig, but bites came so fast that we simply used a few Water Gremlin BB split shots to enable us to cast further. Within 30 seconds we had a bite almost every cast, which made for great video footage. 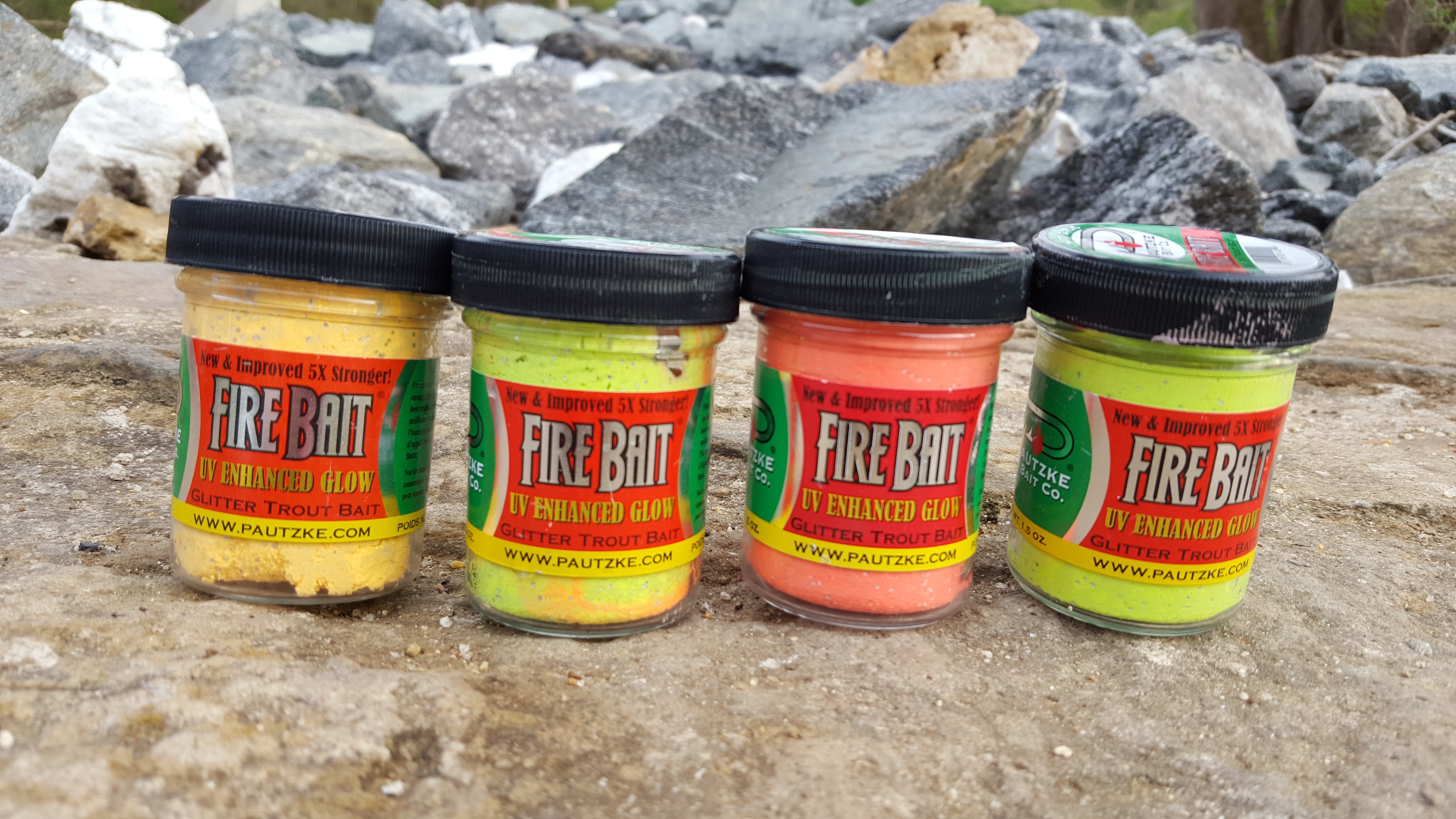 We only caught two browns. However, rainbows and some quality brook trout arrived consistently. Most of the trout we caught ran between 11-14 inches, but we did land a few to 15. Arrive with Fire Bait and you’ll likely find the same success. 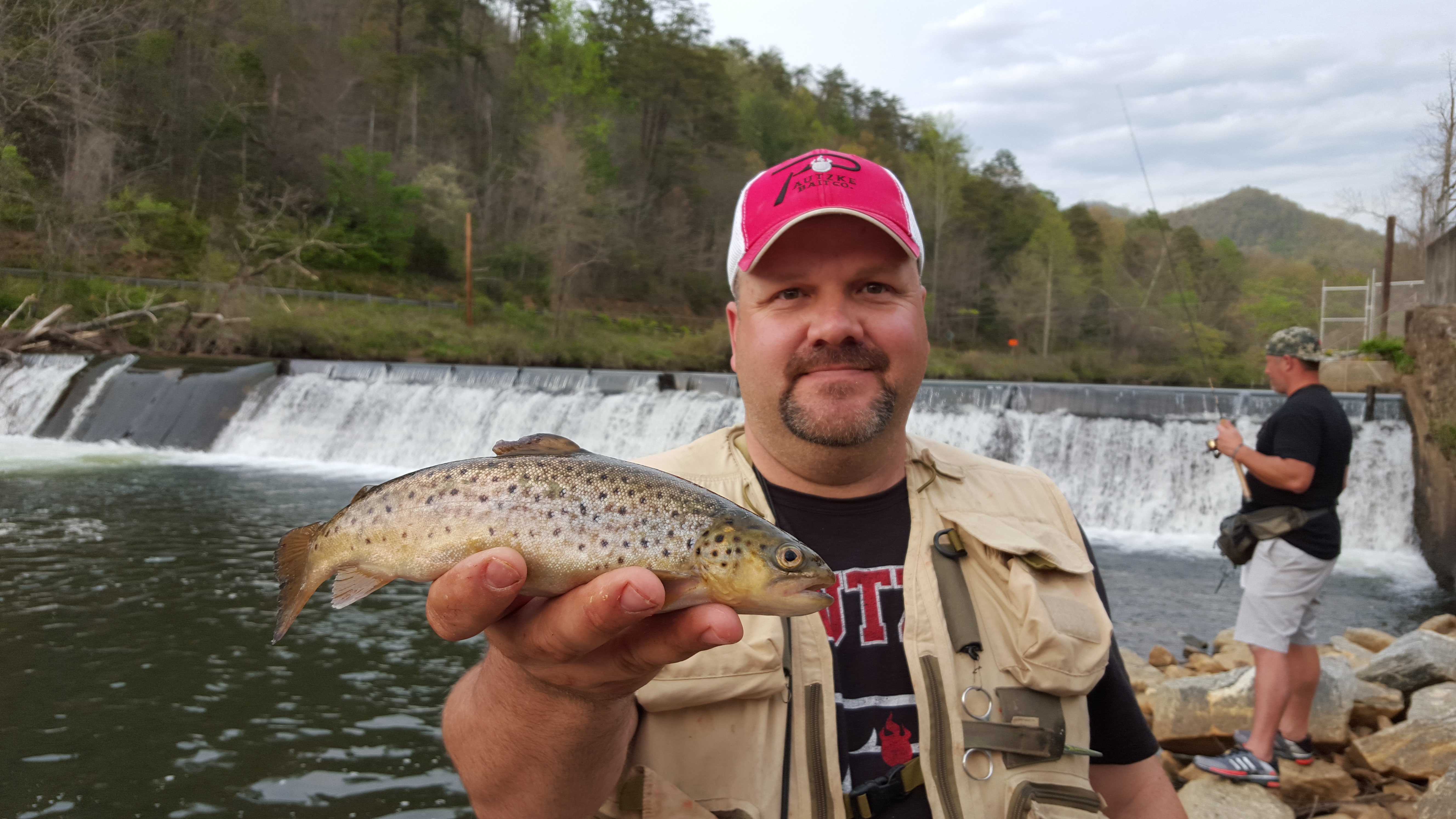 Editor’s Note: The hatchery supported section of the Tuck remains open to all legal fishing methods. Meanwhile, the delayed harvest section doesn’t open to bait until the first Saturday in June. Team Pautzke filmed an episode of Pautzke Outdoors here that will be live in June. When fishing the Tuck, Team Pautzke recommends eating BBQ at Haywood Smokehouse in Waynesville. It’s top-notch. In fact, one of the country’s best and at par with Luella’s in Asheville.