Over the last 15 years we have filmed in Canada at least two dozen times. While it’s been a few years, we used to frequent the British Columbia Coast in search of salmon and the Lower Mainland for trout. We’ve been fortunate to trout fish the Alberta side of the Canadian Rockies. Ontario has been a more frequent home. From the beautiful steelhead filled Saugeen River to ice fishing for jumbo perch on Lake Simcoe and trolling for salmon on Lake Ontario in the GTA we have been fortunate to experience many of Canada’s best fisheries. This week was the first time we’ve filmed in Quebec and conditions couldn’t have been more odd.

By that, I’m talking about lots of rain – in the dead of winter – high runoff, freezing rain and poor road conditions. We only had one day set aside to fish for brook trout and this is what we were greeted with. I guess it’s still better than contending with brutally cold temperatures. On the other hand, the up-and-down barometer created major challenges. We were fortunate to remain successful. 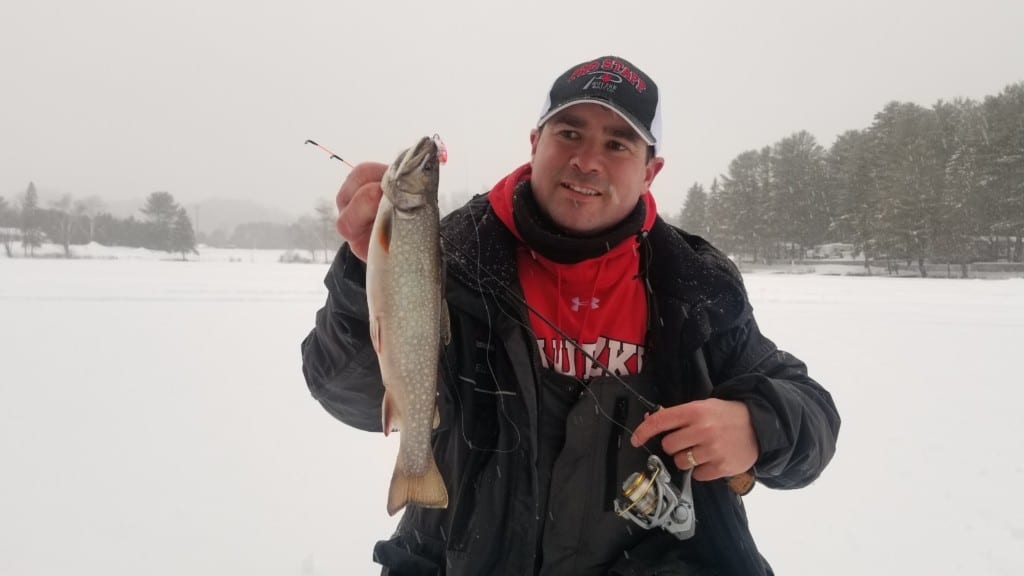 Brook trout fishing wasn’t exceptional. We had to work hard to catch fish, but all of us attribute that to the weather conditions. We saw dozens of other anglers on the lake, all of whom told us that the bite was poor. We set up tip ups and jigged. Neither technique produced lots of action, but we caught fish on each. The brook trout were not acting normal. We know this because we dropped a Marcum camera down the hole to watch brook trout swim to one of the most popular areas in the lake. On the other hand, we watched the camera for five hours and only saw one brook trout, which tells us the abnormal weather patterns changed what the fish were doing.

Normally, when we film Pautzke Outdoors we only use our product. However our friends Jeremy Marquis and David Vadnais wanted to use worms on their tip ups. They set up 10 tip-ups all with worms on them. We did catch two brook trout on the tip ups the entire day, but worms weren’t the bait of choice. 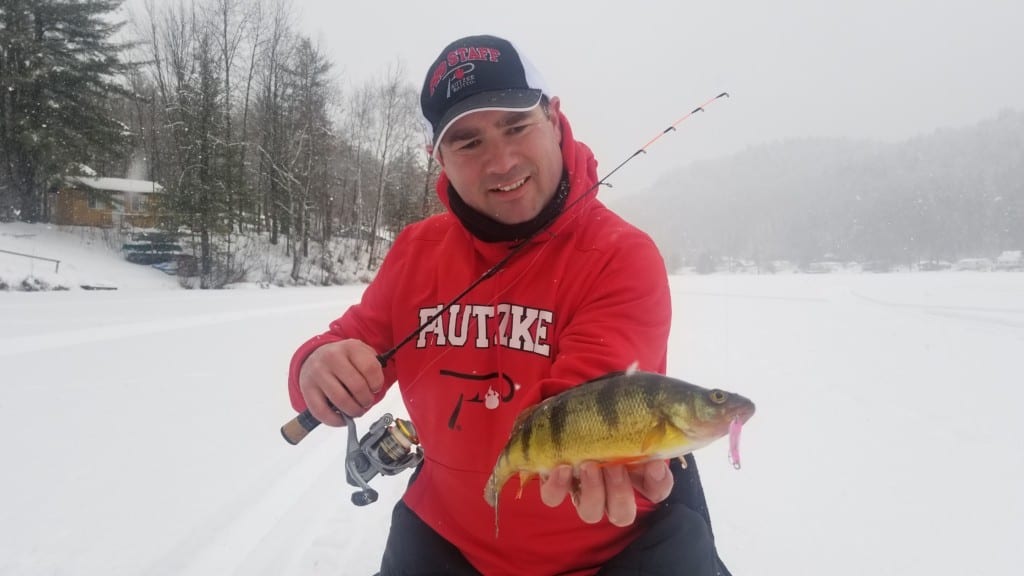 Our jigging rods were the most successful, but the truth is we had to work hard with them as well. Using small Northland Tackle spoons we tipped them with Fire Balls to add scent. In addition, we used Atlas Mike’s Anise Lunker Lotion on the jig heads to enhance the scent further. This proved to be the most productive method of the day. We ended up catching several brook trout with this method, but what surprised us the most is the number of jumbo perch that we caught doing the same thing. Our friends mentioned above fish this lake often and had never caught a perch here before. Clearly the Fire Balls were working for perch and the brook trout. We’ll be back next winter to spend more time and film more episodes. 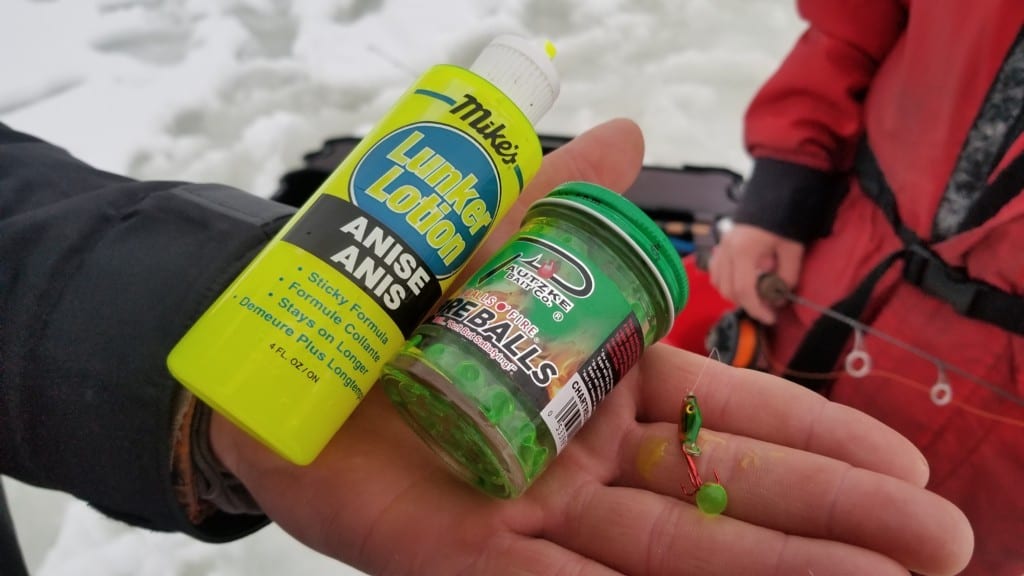 Editor’s Note: We are aware that even with high demand finding Fire Balls has been very difficult in Quebec this year as most places are sold out. We know that Cabela’s in Ottawa carries them. SAIL also carries them online and some tackle shops in Quebec have them. 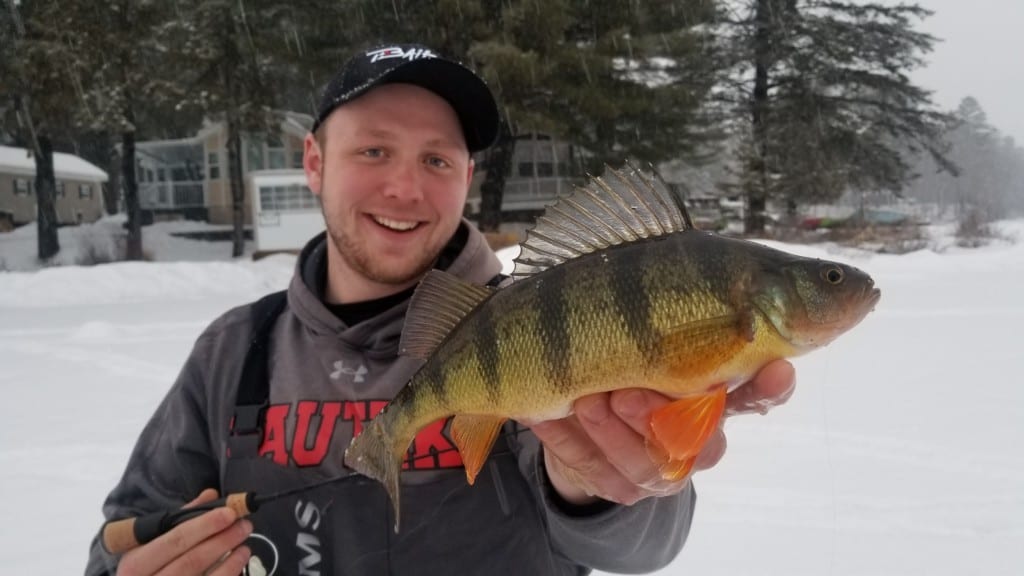