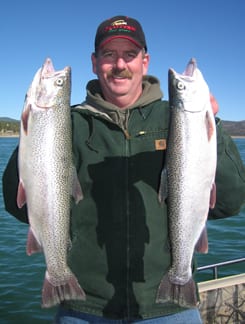 Rick Kennedy has hunted and fished his entire life. And, to fuel his passion he started Tight Lines Guide Service in 1996. Based in Grass Valley, California, Kennedy spends his time chasing Northern California’s trout and kokanee.
Kennedy has been praised by the fishing industry as one of the top kokanee guides in the state and also gained the same type of notoriety on Eagle Lake where he fishes for the trophy trout in the fall.
Rick fishes and guides on most of Northern California’s lakes and reservoirs. He focuses on catching rainbows and browns in Stampede around ice out, prior to targeting the rainbows of Lake Davis. As ice breaks and ramps open, he’ll add Jackson Meadows Reservoir, Boca, Donner and Prosser to his list and remains on these waters where he keys in on kokanee and rainbows through the summer and fall. During the winter and at various times throughout the season he’ll bounce over to Englebright for rainbows, Bullards Bar for kokanee and Scotts Flat for browns and rainbows.
In 2002, Tight Lines expanded its business by offering upland game and waterfowl hunts to his clients in conjunction with fishing or better known as special Cast &amp; Blast trips.
Kennedy is one of Nor Cal’s more popular seminar speakers. Kennedy performs seminars that are developed to not only entertain, but also educate through a professional presentation using state of the art equipment. More than simply how to fish, he explains the habits of trout and kokanee and techniques to better enable anglers to more productive outings.
Kennedy is a veteran seminar speaker at the ISE Shows in Sacramento and San Mateo and has become a staple in Sport Chalet and Fisherman’s Warehouse. He’s also conducted seminars at Cabela’s in Reno and Bass Pro Shops in Manteca. In addition, Kennedy’s represented Sean Mann Outdoors at the Waterfowl Days at Sportsman’s Warehouse in Reno and Rocklin. California.
Kennedy is a regular guest on California Sportsman Radio 1140 KHTK providing fishing and hunting reports from wherever he happens to be. He also provides reports to Western Outdoor News and is frequently featured in California Sportsman, The Fish Sniffer, California Game and Fish, Field and Stream and Salmon, Trout &amp; Steelheader.
Tight Lines Guide Service is fully insured and licensed by California, the U.S. Coast Guard and California Department of Boating and Waterways and has the required U.S. Forest Service special use permit for the lakes Kennedy fishes. The Tight Lines boat is equipped with not only the latest fishing equipment, but also necessary safety equipment.
For more information, visit www.fishtightlines.com
Learn More