The past few years salmon were greeted by cool water when they swam out of the Pacific Ocean into Rogue Bay. Temperatures were favorable for the fish to blast through the bay and on up the Rogue River to spawn. Fortunately for anglers opting to troll the bay this summer and early fall, that isn’t the case. Mother Nature is forcing the salmon to stay awhile.

This summer salmon are faced with warmer temperatures, forcing them to slow down and acclimate prior to heading upriver. The scenario is prompting me to believe we’ll see better than normal fishing in Rogue Bay through early fall as salmon are spending more time in the bay. Keep in mind fresh fish continue to file in through October. Our season is just starting. 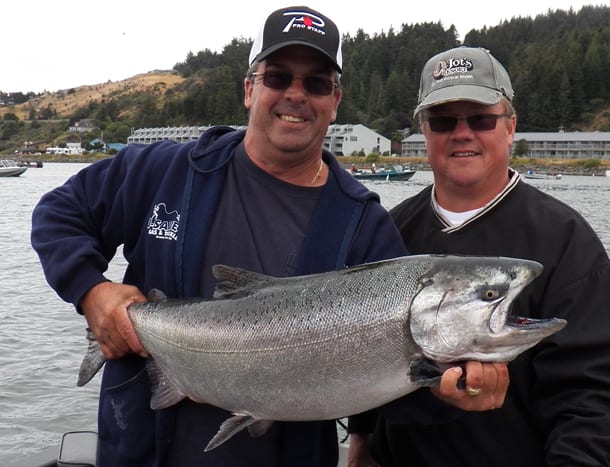 Consider that the Pacific Ocean is in the 50s here on the Southern Oregon Coast. As the salmon enter the bay and encounter 70-degree water they don’t want to go any further. The swim in the bay, turn around and head back into the ocean before returning on another tide swing. This is giving anglers a great opportunity to fish for kings in the bay, one that wasn’t near as good last year when water temperatures were cooler thus allowing salmon to acclimate quicker and migrate upriver to spawn.

These conditions aren’t likely to change until October. Meanwhile, a large fluctuation in water coming downriver from the Grant’s Pass area could derail conditions. However, I see it unlikely with the warm weather we are having. Unless they let a tremendous amount of water from the dam, fishing should only pick up in the bay. There’s no reason releases would be increased at this time. 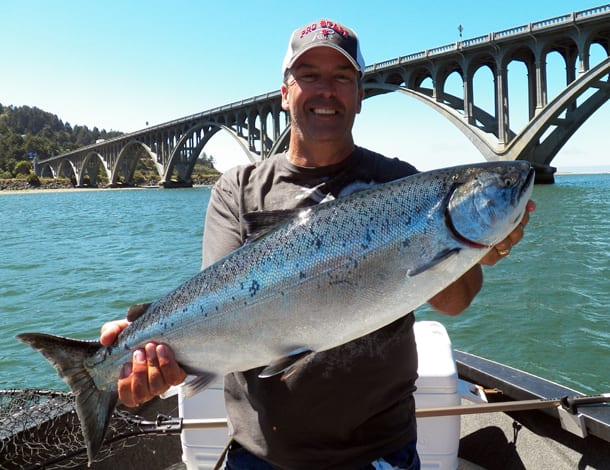 Historically, we’ve needed cooler water to trigger the salmon’s migration up the Rogue. That only happens two ways: dam releases and rain. On the other hand, once these fish get acclimated to that 70 degrees water they are going to head upriver at some point. Meanwhile, it takes them time to get used those temperatures, therefore they spend more time in the bay than they would if the water was cooler.

Our run has only started recently. Early on, I’ve noticed the fish ranging from 17-22 pounds, but we have heard of a few 35 pounders caught already. Normally, we won’t start seeing larger fish for a few more weeks. Rest assured, we will see some big salmon in the next few months. 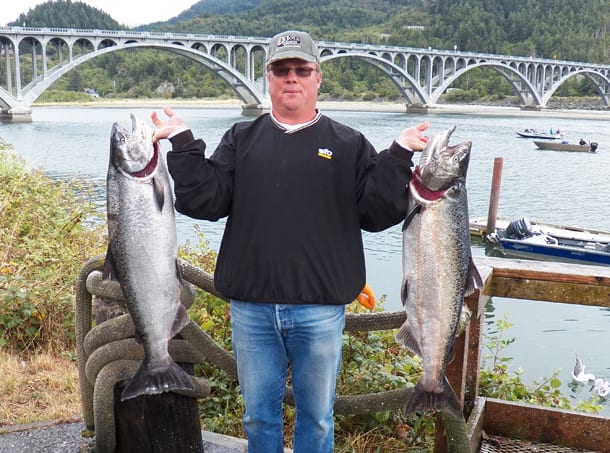 I find that action is better on an incoming tide, particularly when that tide peaks. When the tide goes back out anglers tend to head to the Sand Spit where salmon congregate. Salmon mill around the Sand Spit before heading back into the ocean. You’ll see them jumping around the green buoy. This area is prime real estate for catching salmon. 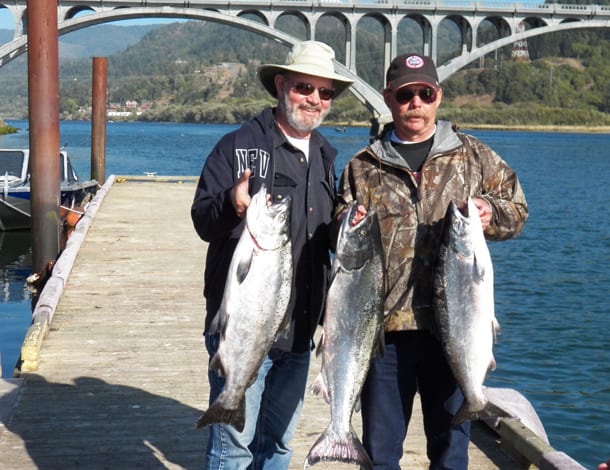 Down here, everybody is trolling bait and spinners. They are dragging THI (made at Jot’s Resort) and G-Spot (made at the Rogue Outdoor Store) spinners or trolling an anchovy with a spinner blade or a straight anchovy. We (and everyone else around here) have been brining all anchovies in Fire Brine. Most guys are running Natural Fire Brine, but I’ve had a lot of luck with chartreuse. 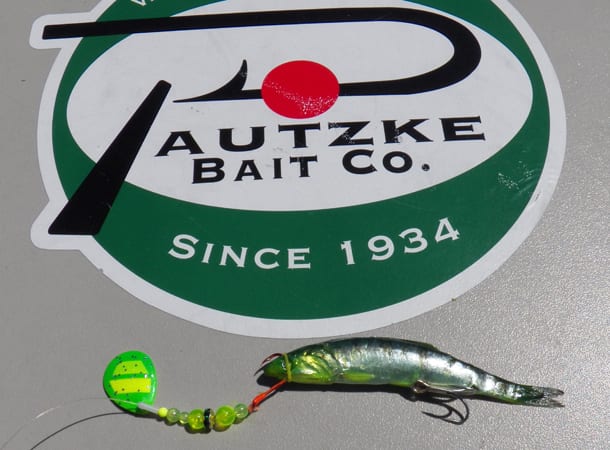 While it’s popular up north, nobody runs herring here. Our fish are eating anchovies in the ocean and that’s what they crave in the bay. However, if you travel north and fish Coos Bay people are running herring. If you are going to fish Rogue Bay it’s important to remember this is an anchovy fishery. People that fish Buoy 10 come down here with herring and have no luck.

When you let your anchovy out behind the boat, I’d recommend going 4-5 bars, which is 40-50 feet back. Depending on the tide you’ll want to use 2-3 ounces of lead. I’m running bait on 30-pound Izor or Maxima monofilament for a mainline and 30-pound Berkeley Big Game for my leaders. 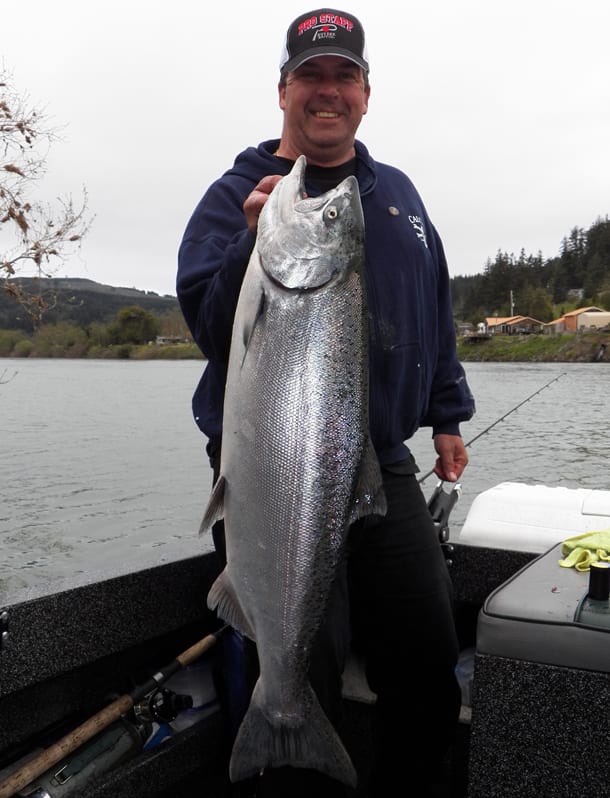 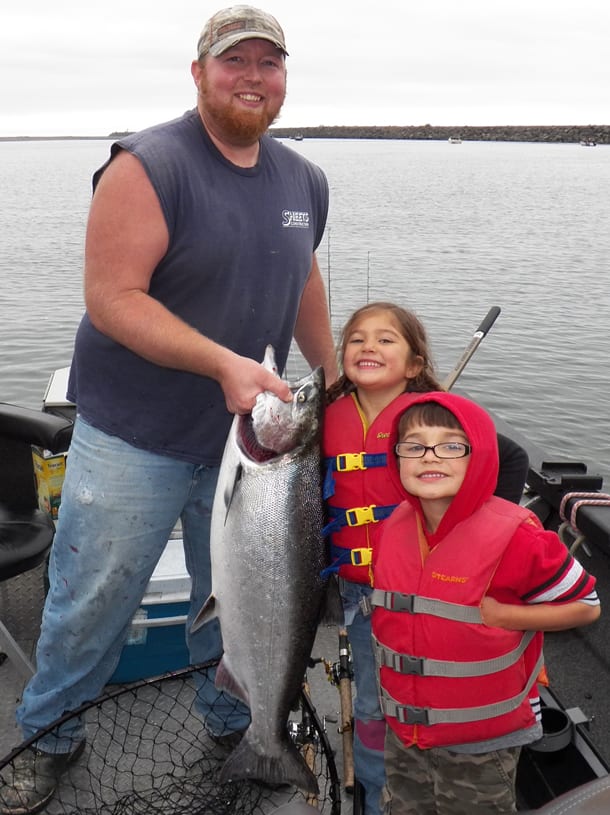