The entire main stem Salmon River has a lot of steelhead right now. In fact, the last time we experienced fishing this good was in 2010 when we had a huge A-Run return. Fortunately, there’s plenty of action left this season. I think we’ll see at least another month of good fishing.

Action has been consistent when fishing bait. On a good day we’ll see 15 fish, but we’ve had a few days where we’ve caught more than 20 in the past few weeks. We’ve seen a lot of our class A-Run fish, which are the 23-28 inch fish, but we are seeing a lot of large, wild fish, too. Those fish run 32-40 inches.

The reason I think our fishing on the Salmon River is so good right now is due to the warm water that we had in the fall. Our water was too warm for the steelhead so those fish held up in the Snake River and didn’t migrate upriver until the past few weeks.

This was evident in December and early January when the Lower Snake fished well during the period when the Salmon River was iced up. Meanwhile, the Salmon is now warming up. It’s about 37 degrees, which is pulling the fish out of the Snake and into the Salmon River, thus keeping our action steady.

It’s no secret where the fish are this time of year. We’re focusing on tailouts. The Salmon is a pool-and-drop river. You’ll have great big eddies and a tailout in the end. Most of the fish are hanging where the eddy is breaking and starting to tailout. That being said, if you get a big long bend in the river where there’s a steady flow, the outside corner has been good, too. 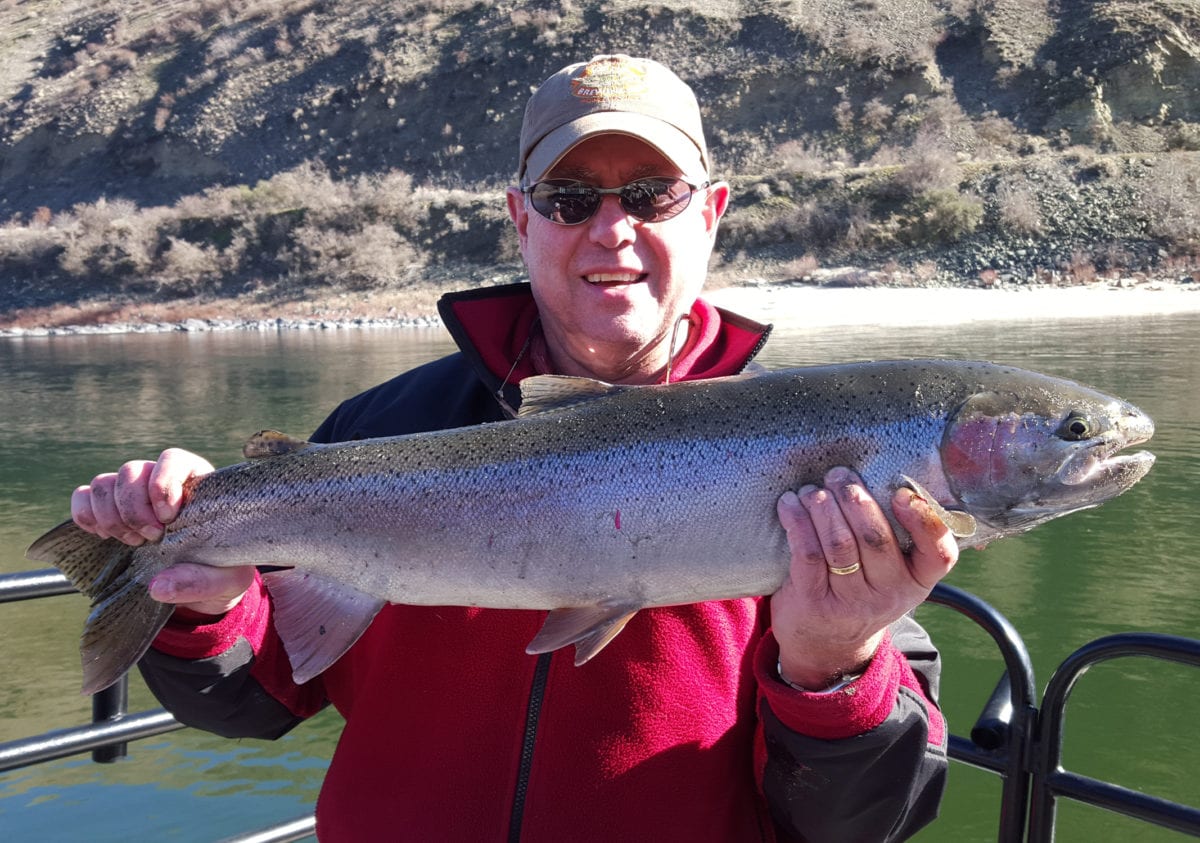 I’m fishing coon/striped shrimp exclusively. Corkies and brined/dyed shrimp has been the ticket. When it comes to Corkies I’m using fluorescent pink and fluorescent red when the sun is bright. On the other hand, on overcast days I’ve noticed the black with silver flake and metallic blue and green have been fishing better. I’m running 10-pound Izorline for my leader and a size 2 Gamataksu and a trailer hook. Leader length has been important. With the clearer water the short leader hasn’t been working well, so we’ve gone to four-and-a-half-foot leaders.

Dying the shrimp has been vital this year. I’m doing them in chartreuse and pink. The shrimp actually milk in the water. The dye gets caught in the shrimp’s shells and as they are drifting along they milk. They are messy. The dye sticks to everything, but the color of the shrimp when it comes through the water is impressive to us and the steelies.

The Fire Dye is awesome on the shrimp and easy to use. I take a gallon coffee can, fill it with shrimp and let them thaw. Then, hit them with an entire bottle of Red Pautzke Nectar before adding a half bottle of Fire Dye. I let them sit overnight and the next morning I’ll fish them.