The temperature is rising in Northern California and as it does the surface bite on Lake Shasta is expiring. It lasted longer than many expected this year, however. Meanwhile, warmer water spells deeper trout, which is normal on Shasta in June. Based in Redding for a week to film episodes of Pautzke Outdoors we hopped aboard with Jeff Goodwin of Jeff Goodwin Guide Service on Monday night from 7-9 pm to see if the trout bite was still good.

In fewer than two hours fishing we trolled the greater dam area and caught a half dozen trout while missing a dozen others. The good news was we caught mostly two to four pound rainbows. No fresh planters were mixed in. All the bites came from impressive holdover rainbows, all of which sported pink meat. Shasta has grown some excellent trout again this year. 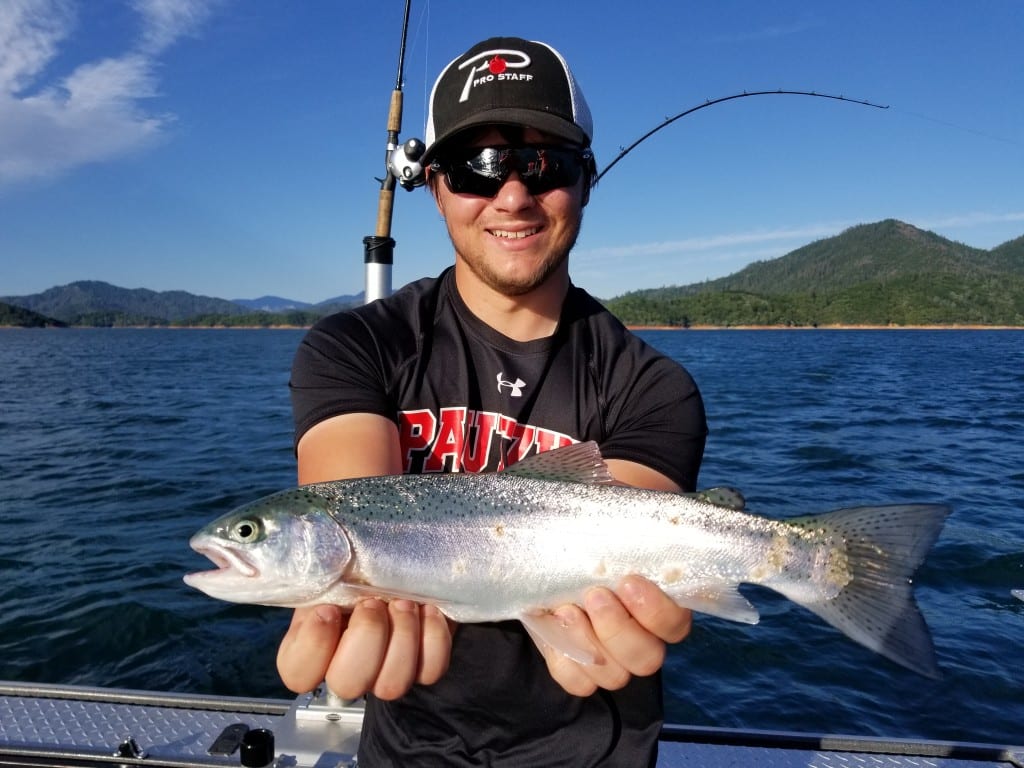 Finding browns in the warmer months can be more of a challenge, as are the landlocked kings. On the other hand, rainbows are becoming easier to locate daily as the thermocline becomes more visible. This week the magic number was 50 feet. Next week it could be deeper if the daytime highs continue to rise and the surface temperature does, too. The surface temperature was between 73 and 76 this week depending on where we trolled. 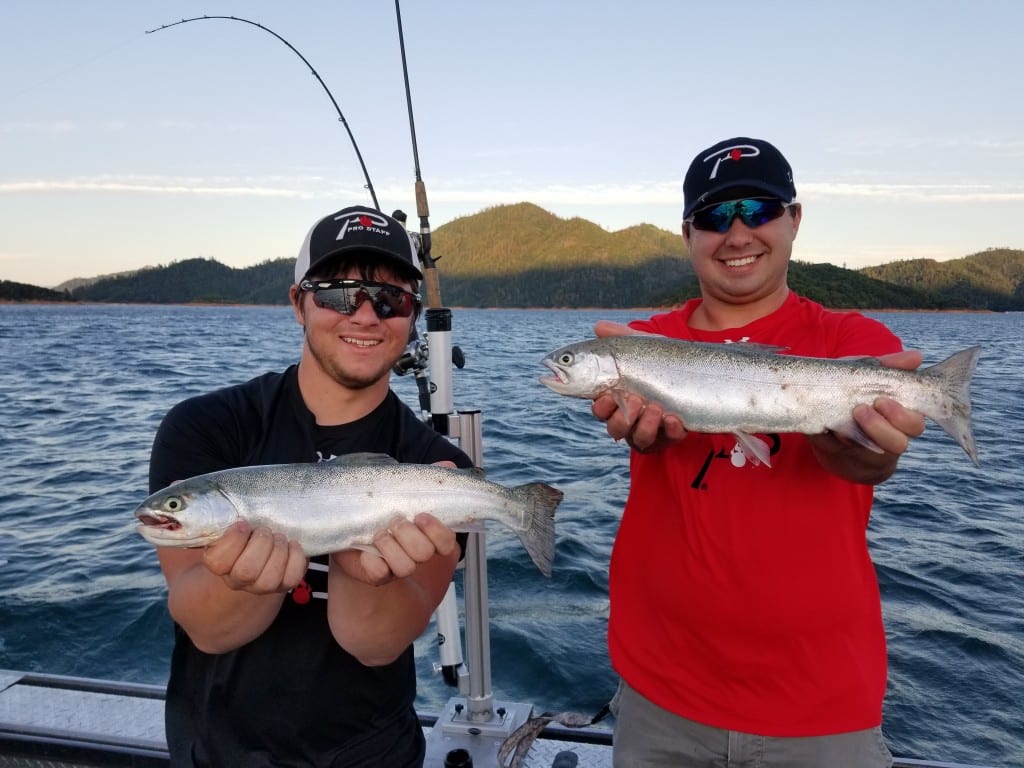 As expected, all our bites came trolling. Goodwin used downriggers and Dipsy Divers. Most of them were rigged to keep our baits at the magic 50-foot depth. We ran two baits: Goodwin’s favorite Optimizer spoons (very similar to a Coyote or Krocodile) and my favorite Blue Fire Brine shad. 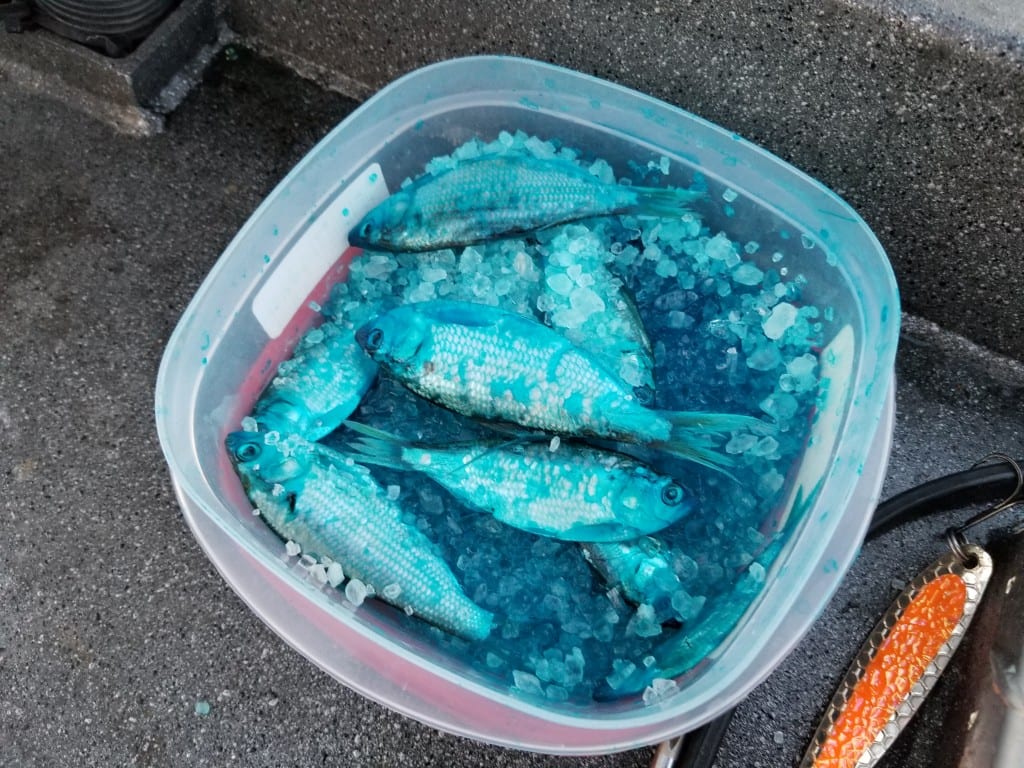 Both got bit often. Fortunately, the shad caught the larger fish and took more bites. Blue seems to be the hot shad color now. They are outpacing Natural Fire Brine. Chartreuse is usually dynamite, but Goodwin hasn’t even tried it yet because blue has been working so well. 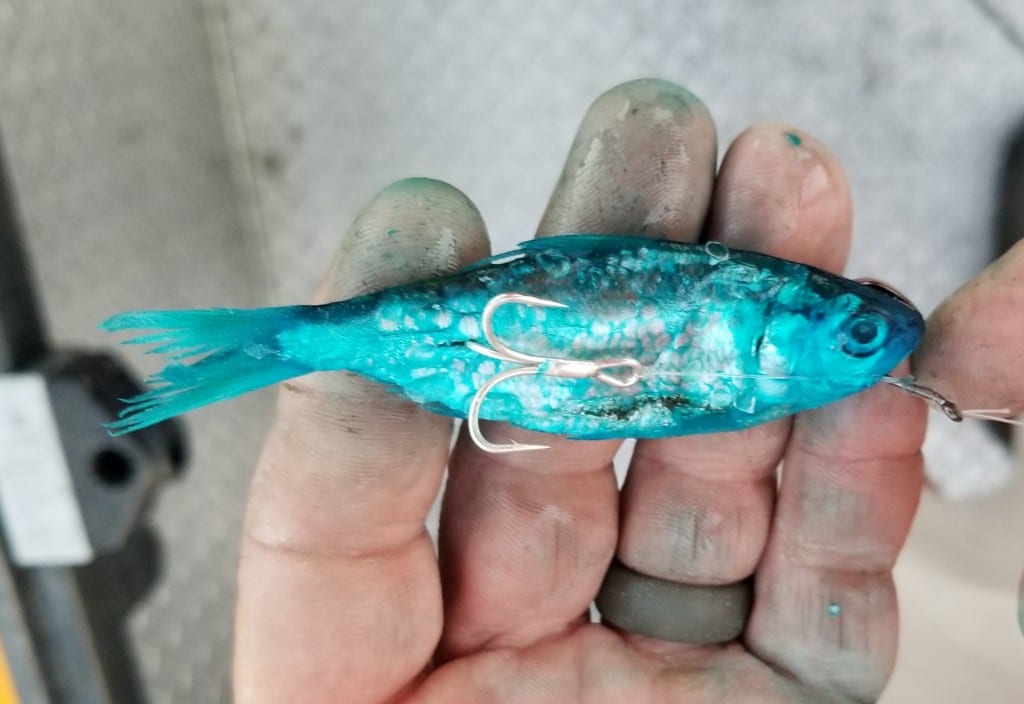 Keep in mind boat traffic on Shasta is increasing daily. To maintain success fishing early and late is imperative. This means from first light till 10 am and again from 7 to dusk Otherwise, you’ll be fighting the heat, sun and boat traffic. Trout will bite throughout the day, but as the sun hits the water they’ll go deeper.