For the second year in row I’m shocked with the size and numbers of trout that the Virginia Department of Game & Inland Fisheries is stocking in Big Tumbling Creek. We thought last year was something special, but this season they are stocking huge trout again. The other day my buddy and I watched them throw 23 nets worth of fish in one hole and they stocked every hole on the creek. The number of trout they’ve been stocking has been insane.

Here in Southwest Virginia everyone is talking about it. The game warden told me they stocked a state record, 15-pound rainbow for opening day a few weeks ago. He said it was as long as his leg and the biggest trout he’s seen in his lifetime. They’ve been stocking the big trout mostly on the weekends. In fact, on the weekends I’ve seen them release a trophy trout into every hole, especially when they see kids fishing. 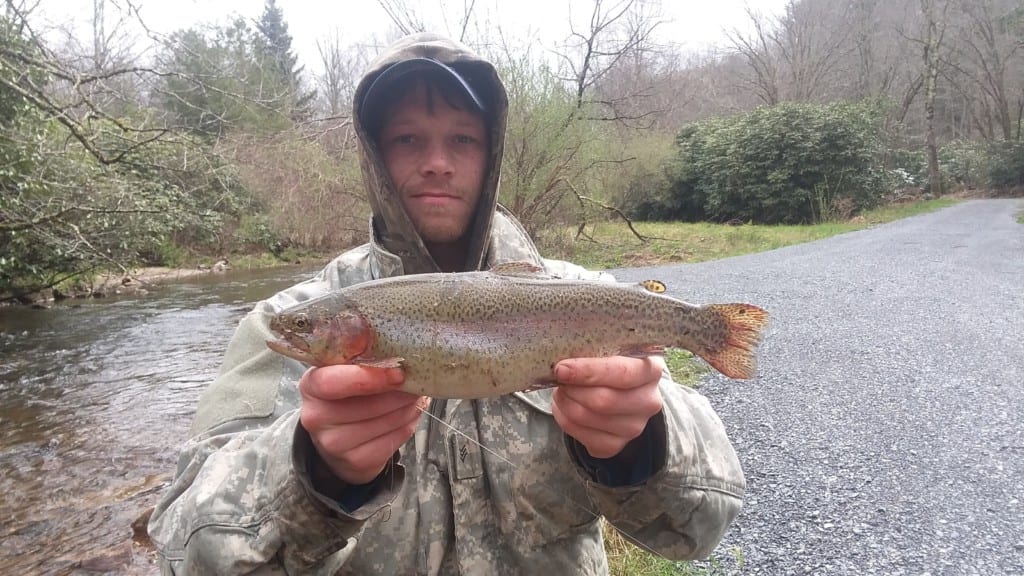 Fishing has been excellent through the first few weeks of the season. So far we’ve only caught rainbows and browns, but the guys on the stocking truck are telling us that brook trout are coming soon. I’ve been asking a lot of questions to the hatchery workers and they’ve told us that the majority of the brook trout that they are getting ready to start stocking are bigger than 16-inches.

What’s been surprising is even with all the rain we’ve been getting Big Tumbling Creek has been in good shape. The water levels are perfect, even when it rains. This wasn’t the case last season. Unfortunately, stocking has been poor in the rest of Southwest Virginia so everyone is going to Big Tumbling and fishing pressure is at an all time high. 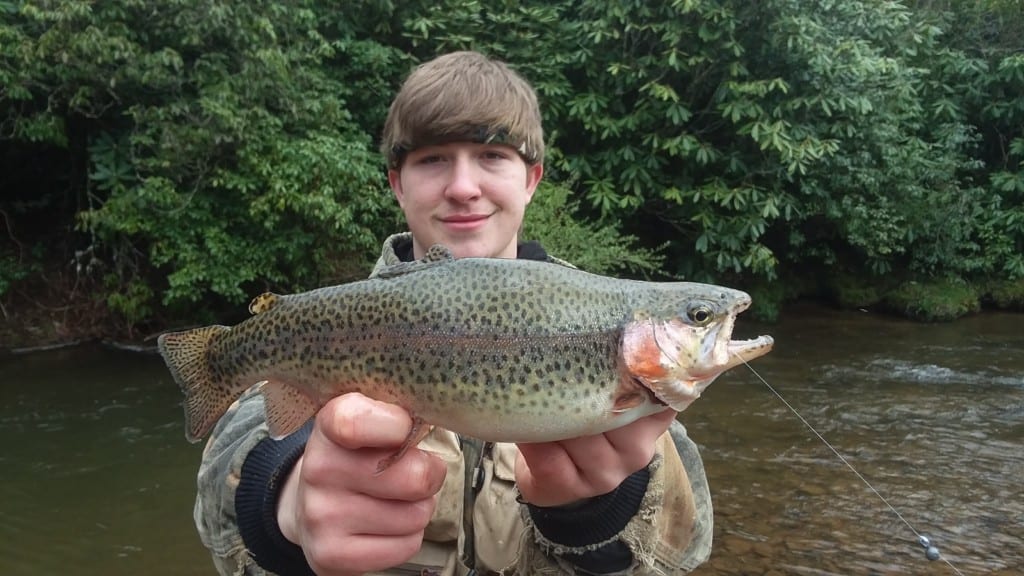 The weekdays aren’t too bad, but on the weekends it gets a little crazy. We’ve been getting up there at daylight and having trouble finding a parking spot. This fishery is becoming super popular. People are coming from everywhere and not just from other parts of Virginia. News is traveling fast of these big trout and people from other states are coming here to fish now. You better get here early or you won’t get a good spot on the creek or the road.

So far this season it has been an egg bite. The trout want salmon eggs. I’ve been catching them on Natural Deluxe and Pink Shrimp salmon eggs and my dad has caught so many on the Yellow Jackets he won’t even give me one from the jar he bought. Drifting eggs we’ve been getting bit on almost every cast and I can tell you why. The guys at the hatchery are saying that there are eggs in the raceway because the trout are spawning, so anything that resembles those is getting nailed. Bring these eggs if you want to catch trout. 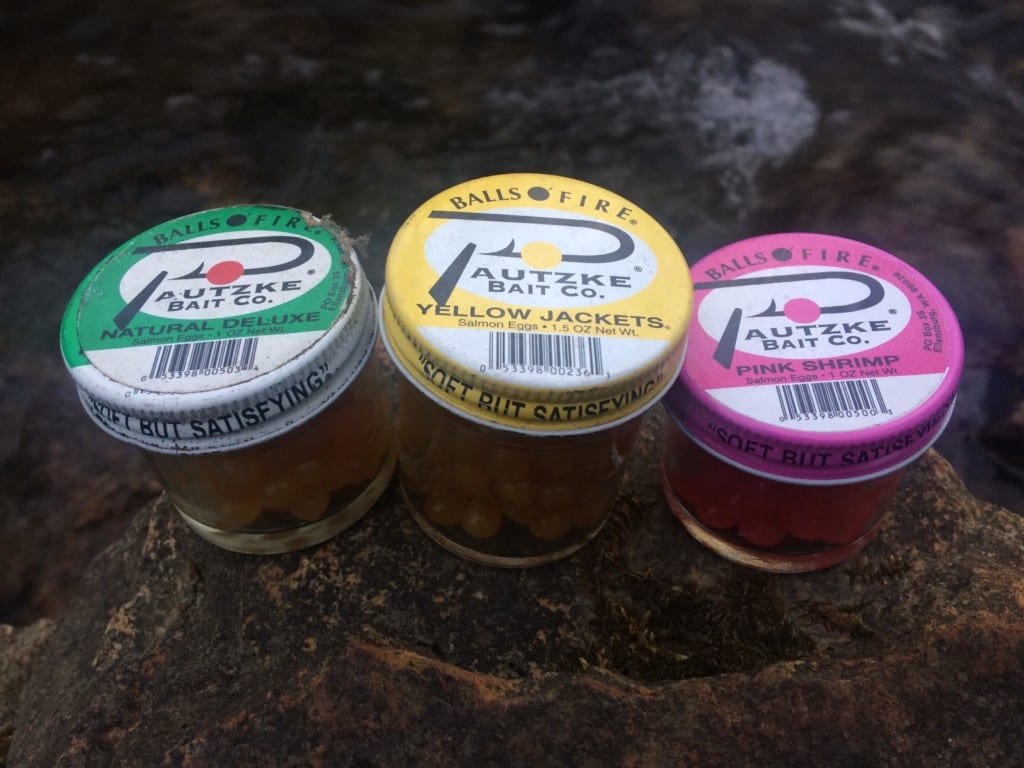 Right now they aren’t hitting much but eggs. We tried Trout Magnets, spinners and dough and they won’t hit it, but the second the eggs hit the water they destroy them. I’m betting this will be the case through mid May and then I’ll switch back to Fire Bait again. Get ready to catch some monster trout. Big Tumbling is loaded with them. 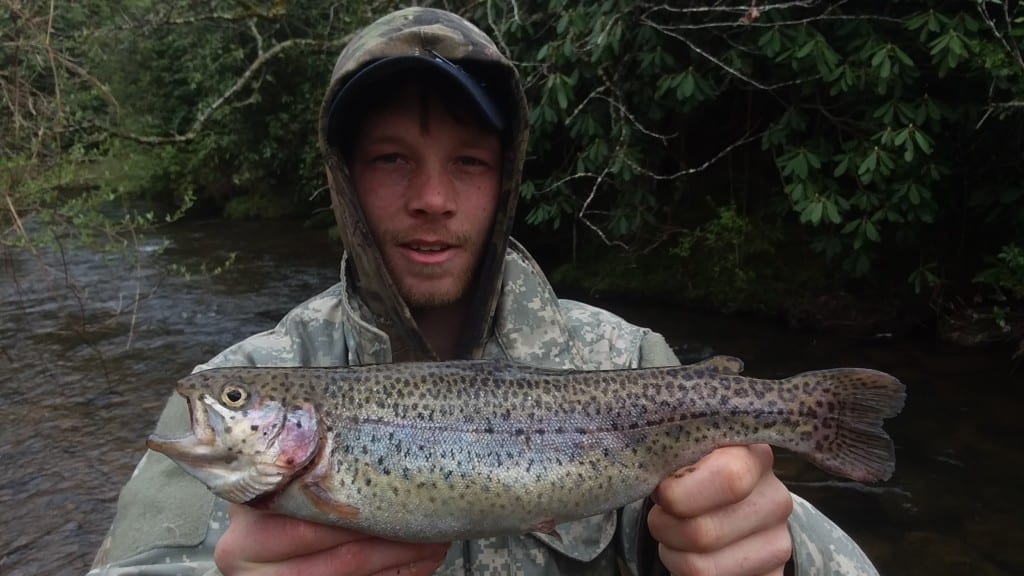