Normally, this time of year in the Motherlode there are 100s of boats out kokanee fishing daily. However, every newspaper and publication around keeps talking about the drought. The negative coverage has hurt the guide business and people haven’t been calling to book trips because they assume there’s no water to fish.

While our drought is a real problem that isn’t going away anytime soon there is still water available to target kokanee. In fact, Don Pedro Reservoir is the healthiest lake around. It’s at 50 percent and there’s plenty of water, but what’s happened is the fish aren’t where they normally are. Anglers have to work tougher than they are accustomed to for our cold water species. 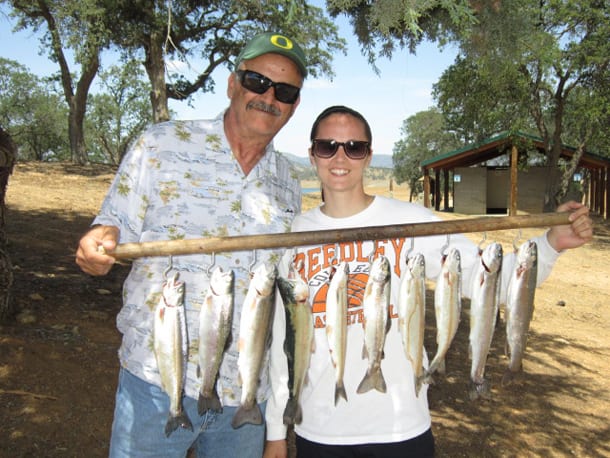 We aren’t seeing the schools of kokanee that would normally be in certain areas. I have to attribute that to warm water and the lack of water. There’s no fish in the bays where there normally would be. Ill give you an example. We fish Graveyard Bay every July and normally there’s 140 feet of water back in there (accounting for a normal summer drawdown) and they are normally 60-80 feet deep, but now there isn’t even that much water in the bay.

The kokanee have to still be in the lake. There’s 250-300 feet of water out there in the channel, but I haven’t been able to locate them consistently. You should be able to see schools of kokanee in the deep water, but for whatever reason they aren’t where I’d expect them to be based on a few decades of fishing here. I know the kokanee are somewhere in the deep water, but there hasn’t been enough pressure on the lake to pin them down. If there were more anglers out here we’d be able to locate the fish easier, but some day I’m out alone with clients trying to troll across five miles of water.

Another factor to consider is one of our more prominent kokanee areas is virtually off limits. From the Blue Oaks Recreation Area to Fleming Bay, where we normally fish, we can’t, because there are buoy lines and cables out there holding the houseboats together. (They normally aren’t, but low water has forced them to relocate here where deep water is available.) The kokanee could be in that channel under the houseboats. Meanwhile, you can’t fish the popular areas like Schoolhouse Point and Mexican Gulch because if you did your downrigger balls would tangle with the cables holding the houseboats together. It’s pretty sad and making it tough for anglers right now.

What I’m hoping is some of the poor fishing we’ve experienced recently was caused by holiday boat traffic and the full moon we had recently, but it’s been a few tough weeks relearning the lake. I’d think that once we find these fish out in deep water they’ll cooperate because they haven’t been hit hard this year. The large schools that we should be seeing haven’t showed yet. At least I haven’t found them.

The scattered fish we are catching are running 14 inches. A big one would be 15 ½. These are nice fish for the Motherlode this year because those at New Melones are like minnows. At Melones a nice fish is 11 inches. 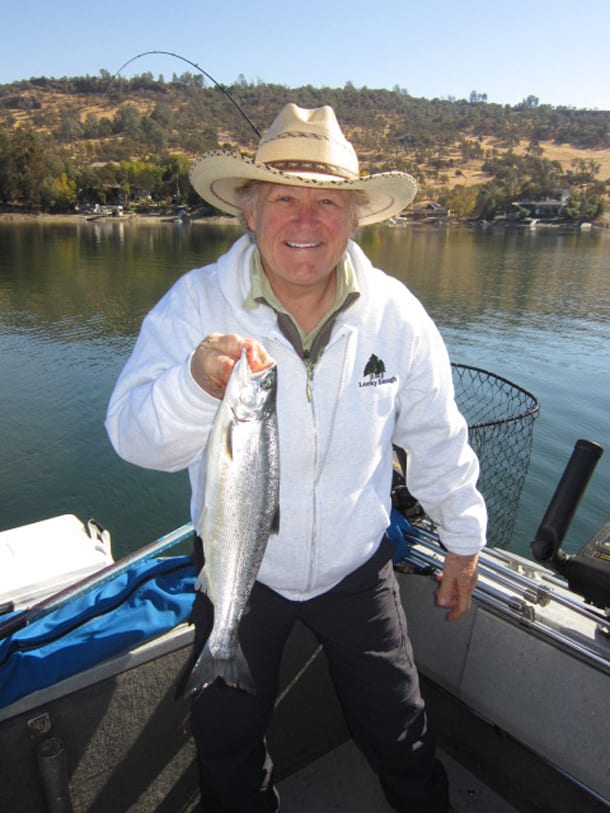 I think the way the fish are acting now June is going to be your best bet. They are going to head up the river channel early and bolt as far up the lake as they can. I’ll be trolling the river to try and intercept them, but it’s going to be tougher this year than it’s been. Still, those who work hard and locate schools can catch limits. In June, I’ll be looking for the cooler water, likely 100 feet deep in at least 200 feet of water.

What I’ve been having the most success on has been chartreuse micro hoochies or glow Marni kokanee bugs. I’ve been dragging them behind 6-inch Sling Blades or 4-inch Vance’s dodgers, using 8-pound Maxima Ultragreen and tipping my baits with natural or pink FireCorn.

Editor’s Note: Veteran fishing guide Danny Layne operates Fish ‘n Dan’s Guide Service. To troll for Don Pedro kings and kokanee with him please visit http://www.fishndans.com/. And, yes, we know the two vertical photos aren’t from this season, but they look better than those with the drawn down shoreline. Layne is going to send fresh photos of the lake shortly.