Following a slow March and early April many anglers were worried that this was going to be another disappointing springer run. However, we’re realizing that the fish are likely just a few weeks behind schedule. After a slow start to the run in the Lower Columbia River springers have finally started their migration upriver in larger numbers. I’m fishing Drano Lake. Each day our catch numbers increase as does the numbers of fish crossing over Bonneville Dam.

I plan to fish Drano for the next few weeks because that will be the peak of the run in this area. The nice thing about Drano is it’s a two fish limit and you can use barbed hooks here, too, which increases your catch ratio. I think it’s too early to tell how this run is going to measure up to last season. The fish just started crossing over Bonneville. However, there’s fish here to catch now. We’ve been catching fish for a few days now. The average size has been 12-14 pounds, but we did see a 27-pound fish caught today. 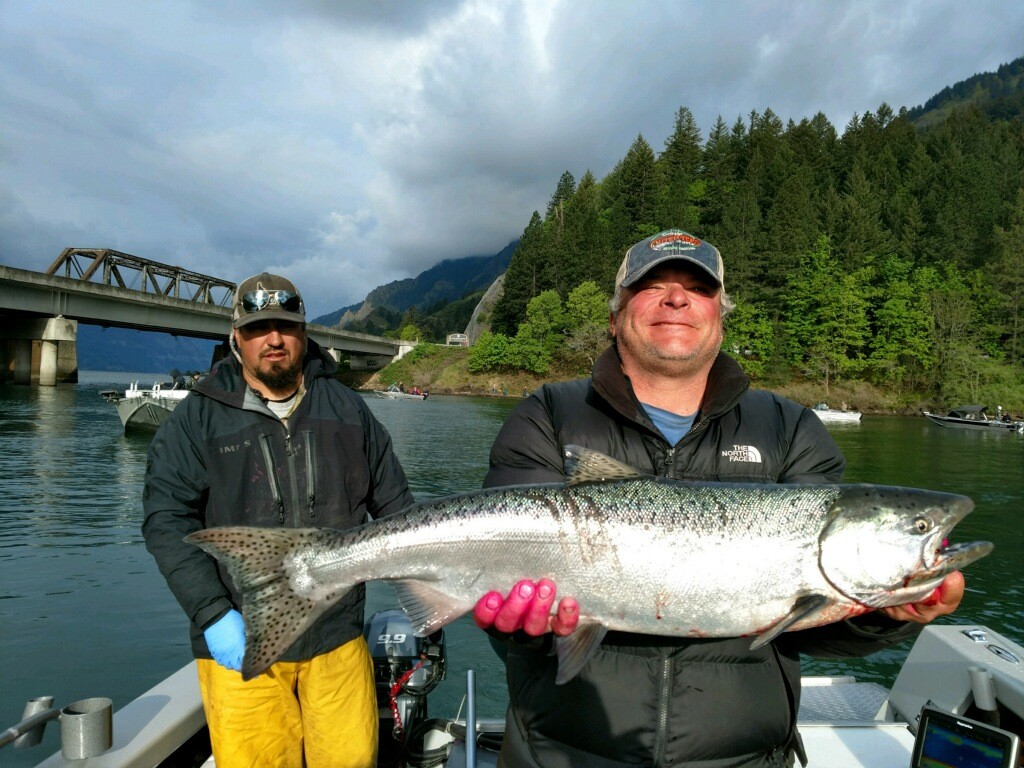 This is a troll fishery. We are trolling prawn spinners and Super Baits. Drano is a lake, which means there’s no current and no one anchors. Every body trolls. The hot spot is the entrance to the lake. Everyone trolls circles there. It’s called the Toilet Bowl. We simply troll in circles all day looking to pick off salmon as they enter the lake. Keep in mind, there’s a river that flows into Drano called the Little White Salmon River and there’s a hatchery up there, which is why these fish are entering the lake. It’s a very productive hatchery. 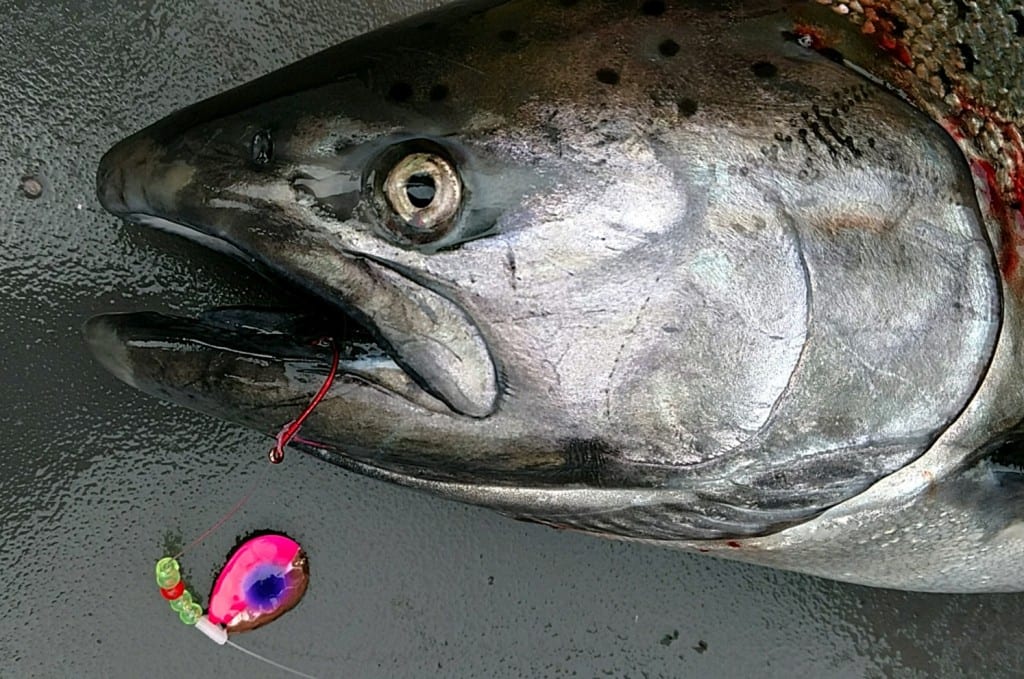 In the morning springers seem to be shallower. You basically want your lines to be in 20 feet down. On the other hand, as the day goes on and the sun gets higher it drives the fish down. At this point you’ll want to stagger your lines from 20-25 feet. I use 65-pound Suffix braid with a 30-pound fluorocarbon leader. The flasher I’ve been doing best on is called a Leo flasher, but we also use the Pro Trolls. 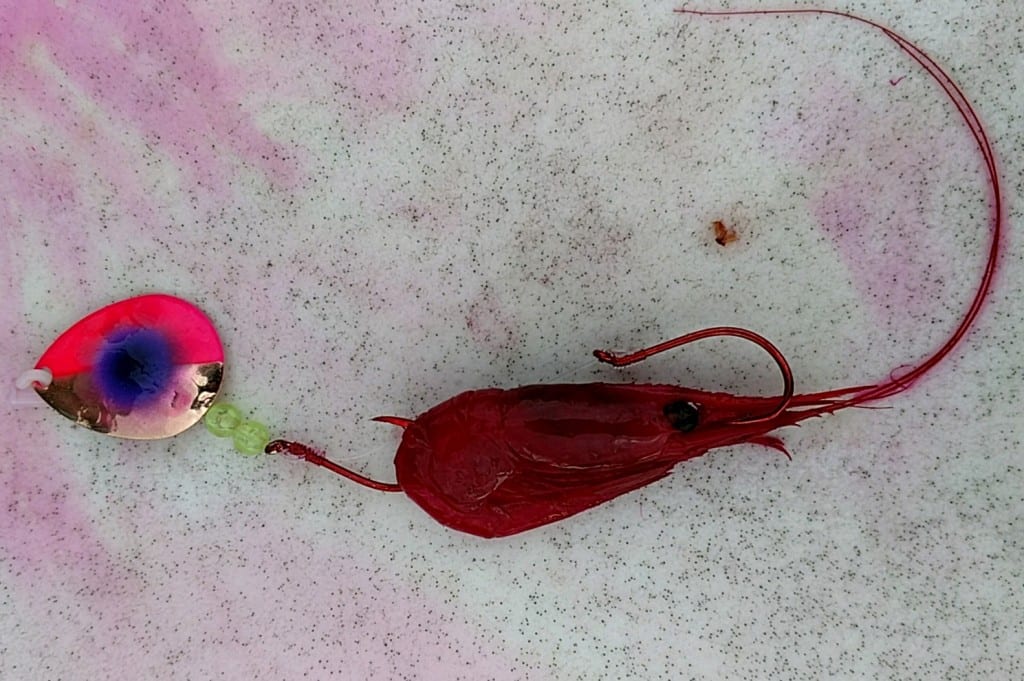 We are using a 3.5 Colorado spinning blade and either coon shrimp or prawns fished on double hook set up with a size 1 Gamakatsu octopus hook. We dye them in either Red Fire Brine or Red Fire Dye. The other thing we do is troll Kokanee Cut Plug Super Baits. I stuff Fire Power scented tuna fish in the Super Bait.

The coon shrimp/prawn recipe is as follows:

Step 4: Fill the remaining space left in the jar with bottled water.

Step 5: Let the shrimp marinate in the mix for five days. Then they are ready to fish. 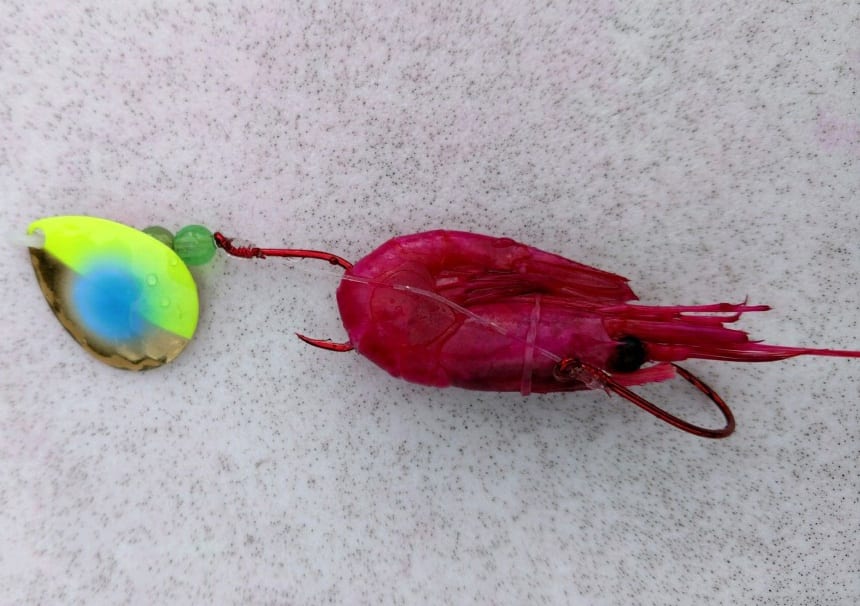 FREE GIFT WITH $50 PURCHASE Choose from a special selection of beanies, hats and visors. This is a limited time offer, quantities are limited so act now! Choose your Free Gift at checkout
Go to Top