For the last decade I’ve been using spawn bags daily for steelhead. However, with more shrimp showing up in the Great Lakes I figured it was time to match the hatch and start using shrimp for bait in our tributaries. I still bring spawn bags to the river daily. However, last year and especially this steelhead season, I’ve been using cured shrimp and catching fish on them daily.

Lake Michigan has an abundance of red shrimp. I know this because we see them on charters daily when cleaning fish. So, I started using the same bottle of BorX O Fire I use to cure my eggs on shrimp. The fish have responded well. Having never fished shrimp for steelhead (and not hearing of many guys that do in the Great Lakes) it’s one of the experiments that have gone extremely well. Not only am I experiencing success with it, but many other guides in the Great Lakes mirror my findings. There is some days that the trout and steelhead only want shrimp.

While many guys do this out West, and have for decades, shrimp isn’t as widely used in the Great Lakes. However, it’s likely to become more popular particularly, because our brown trout and steelhead are gobbling it up. Another thing I prefer with using cured shrimp over eggs is when eggs are tough to find there’s abundance of shrimp available from grocery stores. Many anglers complain of not being able to get fresh eggs. We don’t have that problem with shrimp and they are affordable.

I have one stubborn guide friend that doesn’t like to experiment. He’s one of those guys that doesn’t believe anything works unless it’s his idea. One day last week we caught plenty of trout and steelhead on BorX O Fire cured shrimp while he tried only pieces of uncured shrimp and received no bites. Don’t be shy about trying something new. 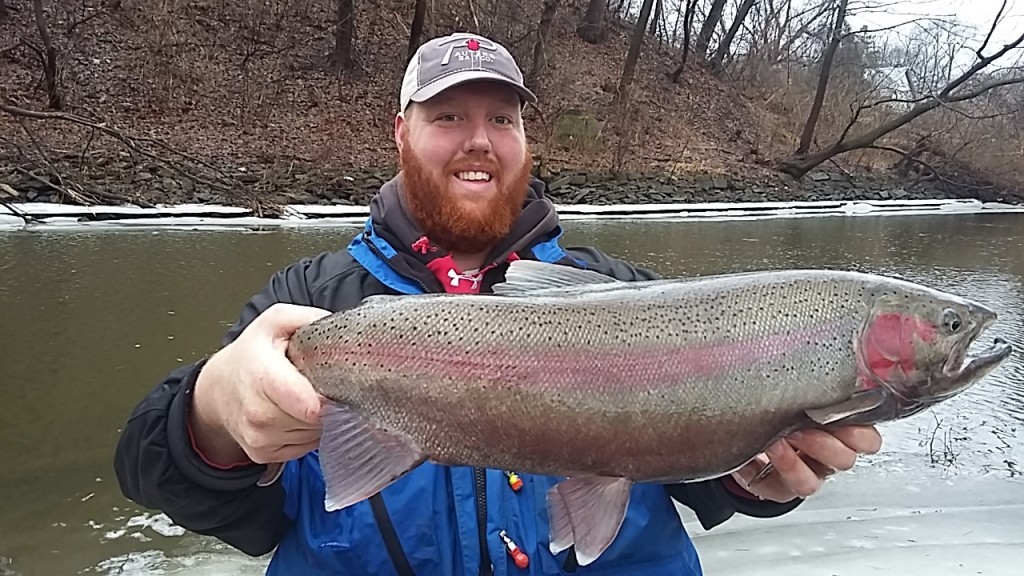 There’s many benefits to curing the shrimp, more so than we know it works. With uncured shrimp, it tends to spoil and stink up your fridge in a week. By curing the shrimp they’ll last in the refrigerator for roughly two months, which saves you time and money. Another thing I like about cured shrimp is they are durable. And, once they are cured the color doesn’t bleed out. You can have them in the water for extended periods of time and the color remains. That color (and the scent from the cure) attracts fish. We use different color netting on spawn bags and different color spoons and spinners for the same reason different color shrimp are effective.

Don’t get me wrong I haven’t abandoned spawn bags. They always work and always will. Meanwhile, by growing my assortment of baits it has enabled me to catch more fish and often show the fish something they aren’t seeing daily. Sometimes it’s as easy as showing them something different to get bites. Also, keep in mind, we aren’t using the entire shrimp rather a small piece about the size of my thumbnail. Therefore, your bait goes a long way. 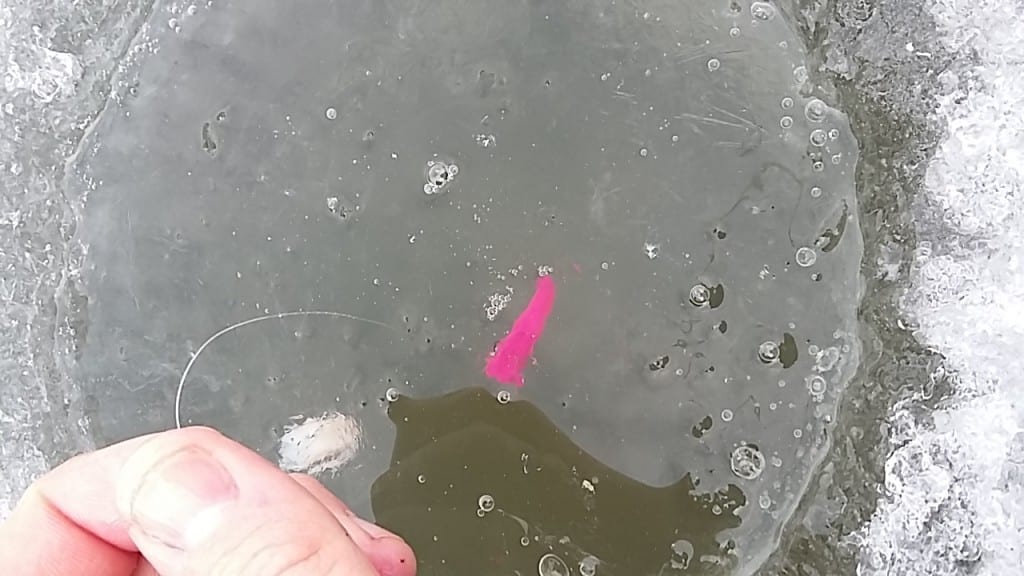 (Above) A piece of Pink BorX O Fire cured shrimp.

This cure is simple and doesn’t take much time. It’s user friendly to first-timers and veteran anglers. I’ve heard many guides out West use Fire Brine and Fire Dye to cure shrimp. That works too. But, this has worked so well for me I haven’t found a need to switch the process. 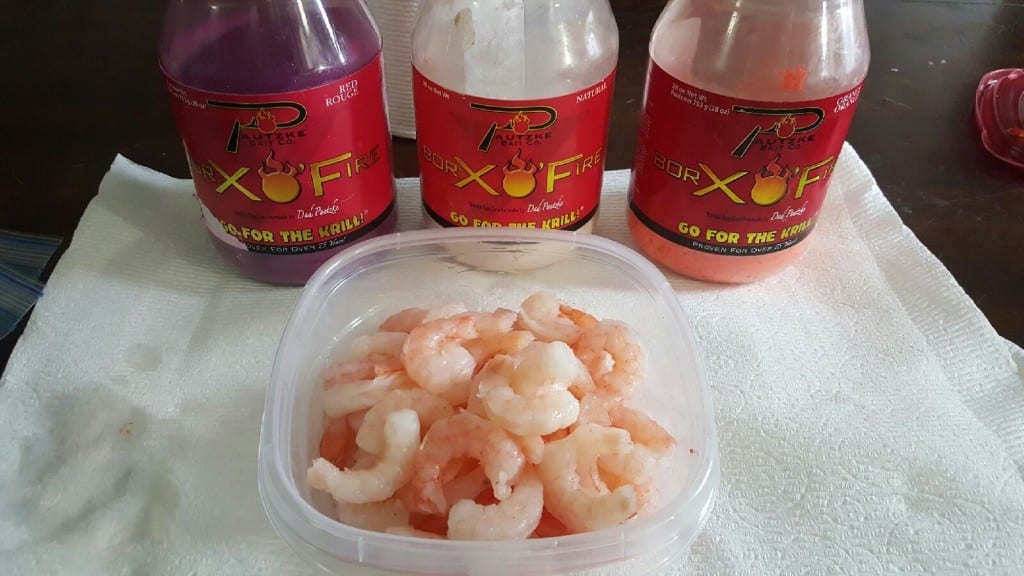 Sprinkle BorX O Fire in Ziploc (or Tupperware). You’ll want to fill roughly half the bag. 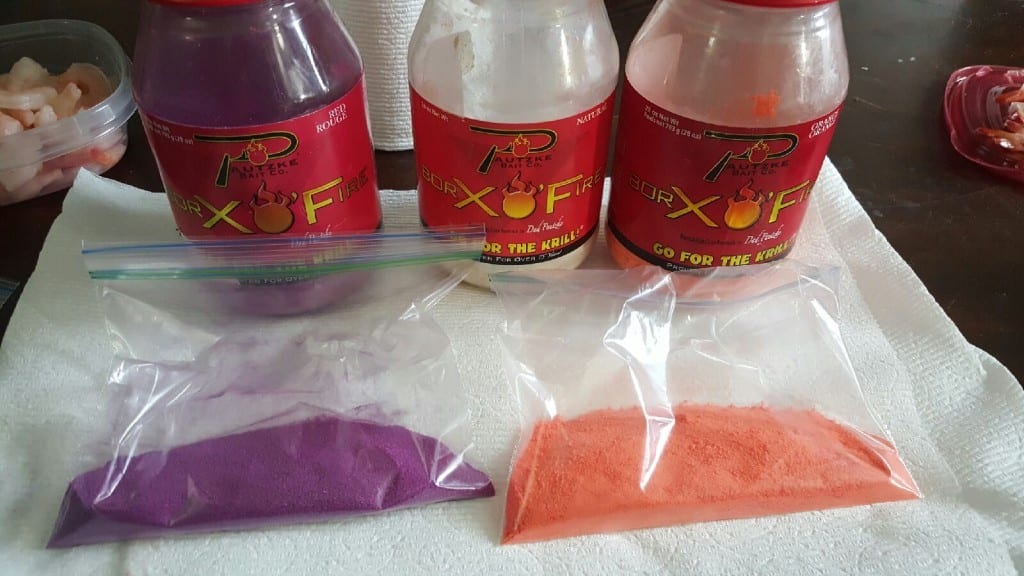 Add thawed shrimp to Ziploc. Shake bag for a few minutes to ensure the cure gets on the pieces of shrimp. You don’t want to leave any of the shrimp exposed.

Allow shrimp to sit in cure for 30 minutes.

Remove shrimp from bag. At this point I’ll lay them on a paper towel to dry for a few minutes. Sometimes the shrimp will milk more from the BorX O Fire. I like to let them dry, although you don’t have to. 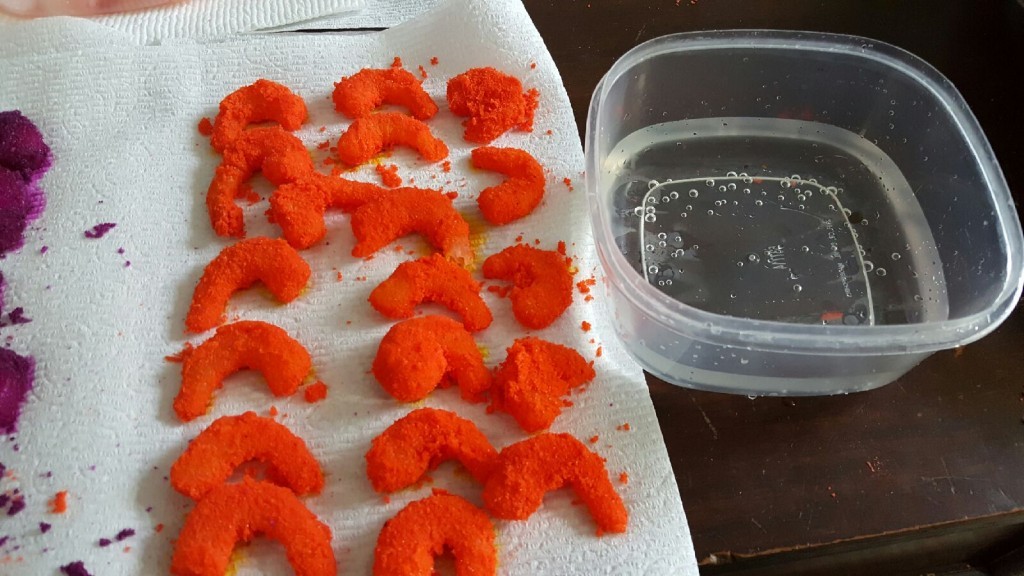 You don’t have to preform this step. However, I fill a small container of cold water and rinse the shrimp for 30 seconds. This removes the excess cure from the shrimp, but doesn’t affect the color of the shrimp.

This is another step that’s not entirely necessary, but it works for me. At this point the shrimp is completely cured. Let dry on paper towel for 15 minutes. They are ready to fish.

As we know there’s four colors of BorX O Fire, and all work. My favorite color is orange. I think the reason why the Orange BorX O Fire works so well is because it’s similar to the color of shrimp we have in the lake. Pink is my second favorite, likely because I tend to drift pink spawn bags and I think this is similar. We all know steelhead dig pink. On tough days the natural seems to work well. However, I always bring all three colors with me so the fish can tell me what color they like best.