It’s been a long time since the Pautzke family has fished in Kentucky. In fact, since established in 1934, we’ve never been. It took selling more than 90 million jars of our salmon eggs to finally peek between the borders of the Commonwealth for trout.

In the decade I’ve been at Pautzke people have told me that trout and Kentucky mix as well as oil and vinegar. Meanwhile, after having wandered through the state a dozen times to go to Kentucky, Louisville and Western Kentucky college basketball and football games (and even a college volleyball and hockey game at UK), and seeing such beautiful, rugged country, I was destined to find trout.

A few months ago, while Googling ‘trout fishing in Kentucky’ I found Jonny Rush of Rainbow Guide Service. I’m 35 and Rush has been making a living off this state’s trout longer than I’ve been breathing. To sample how this mid-South state’s trout compared to the rest of the country a friend and I booked flights into Cincinnati and drove four hours south to Burkesville, Kentucky, to fish the Cumberland River with Rush. 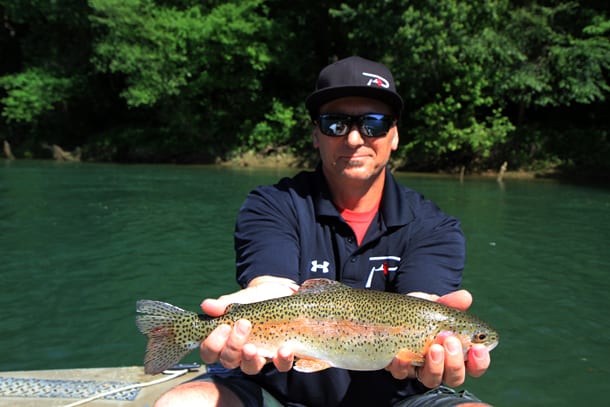 Like many southeast trout anglers, Rush has been a dough bait fisherman for decades. His livelihood depends on how well the dough stays on the hook, its smell and color. If the trout bite it customers come back. And, you’ll quickly learn there’s a lot of trout on the Cumberland River from Cumberland Lake on downriver roughly 75 miles to the Tennessee border. Rush estimates nearly 200,000 rainbows and browns are released here each year. Those join wild fish and leftovers from previous years. 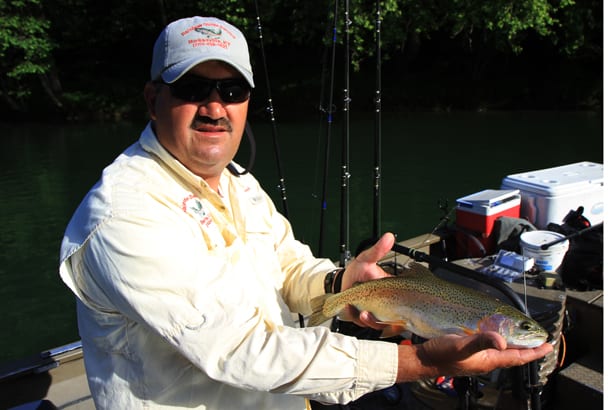 For decades, Rush used Power Bait with confidence. I offered to send him our Pautzke FireBait months ago. The objective was for him to test it in river he called home and see how it stacked up. 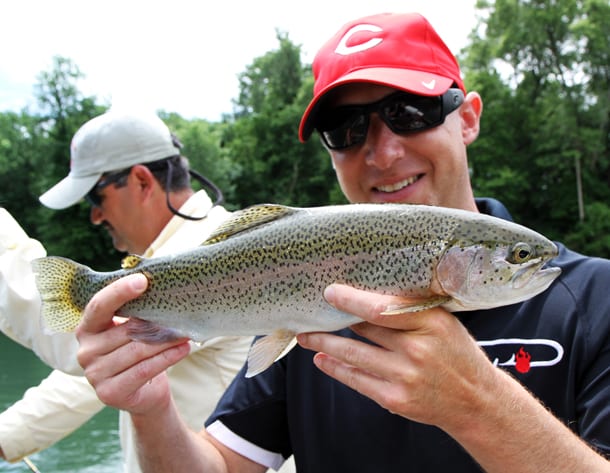 “I’ll be honest with you,” he told me over the phone back in March. “I’ve never found another dough bait besides Power Bait that works. But, I’ll give it a try.”

“Does anyone else know about this stuff,” he asked. “I’ve never seen it in Kentucky before. I don’t think the trout have seen it either because they are hammering it.”

Last Tuesday, we launched in the fog with Rush and motored a few miles upstream to catch Kentucky rainbows. I looked around his boat checking tackle and learning how they target trout here.

“What are you looking for?” he asked.

“I don’t use Power Bait. I use FireBait. There’s at least a half dozen colors in that compartment,” Rush told me. “Grab anything with orange in it and put it on the hook. We caught about 38 on that color yesterday.” 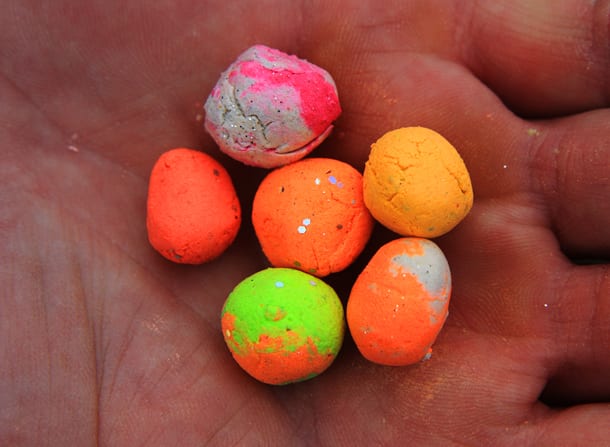 On this steep bank portion of the cold Cumberland River, trout flourish and they get big and fat. Unlike many of the trout planted in the South, these aren’t 8-12 inches. Whatever feed is available is growing trout that rival those just about anywhere in the region, even those in Cherokee (North Carolina), on South Holston River (Tennessee), Chattooga (Georgia/South Carolina), Big Tumbling Creek (Virginia) and others. They average two-pounds and we quickly learned they eat FireBait. 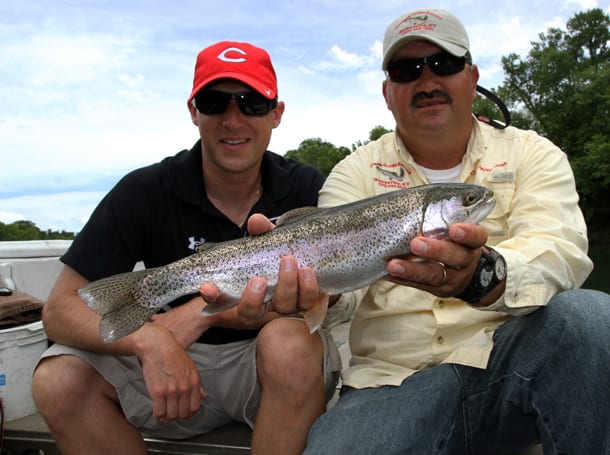 It didn’t take long to catch rainbows drifting FireBait with the current. Rush’s method of using split shots to get the bait down on the bottom, casting FireBait on a treble hook upriver and drifting downstream proved effective, to the tune of a few dozen trout by midday. We caught and released every fish simply because we weren’t planning on eating them. Most of our bites came on Rainbow, Atomic Garlic, Garlic Salmon Egg and Peach Garlic FireBait. 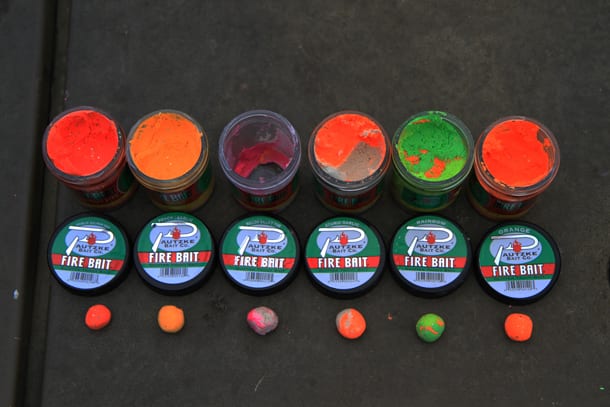 Fortunately, unlike many portions of the Southeast, the Cumberland River is a year-round trout fishery that is turning the corner into prime now. Even when it’s in the 90s, and extreme humidity is present, these trout flourish in 50-degree water and continue to grow daily. For a chance at a three-pound rainbow, which is pretty common this summer, it’s time to head to South Central Kentucky, where some of the hottest trout fishing in the country is taking place right now. 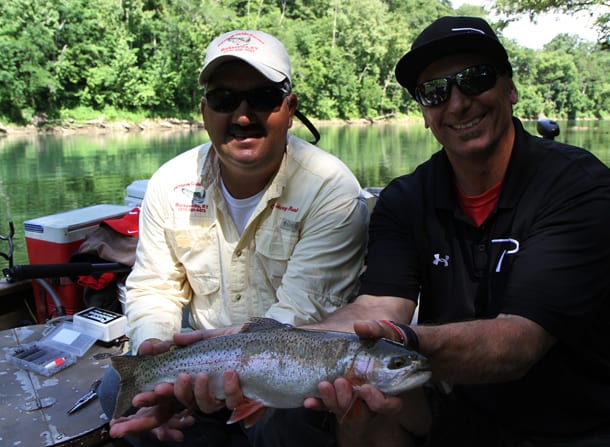 Editor’s Note: For more information on Rainbow Guide Service and Jonny Rush’s Cumberland River rainbow trout trips please call (270) 459-0621. Chris Shaffer is the Director of Operations for Pautzke Bait and wore Western Kentucky, Kentucky and Louisville gear while in Kentucky.  Check back next month for a new episode of Pautzke Outdoors, filmed with Rush on the Cumberland. 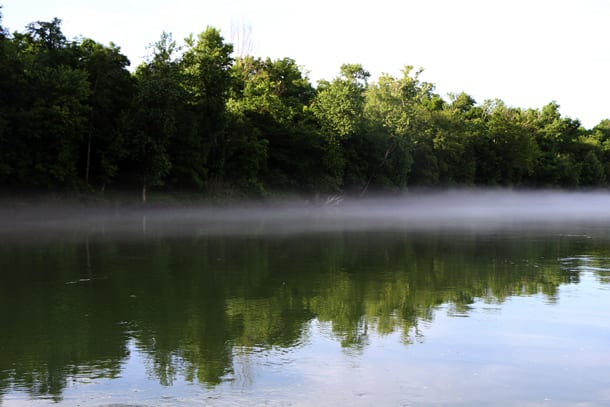