Unlike the last few seasons this year’s salmon on the Klamath River aren’t holding up in pools. They are moving through the system fast. We are catching fish with sea lice 15 miles upriver. If fact, I caught my first fish with any color on it today. I think the water is cooler this time of year, due to the water releases from the Trinity River, and it’s pulling the salmon upriver faster, which is good thing because we want these fish to spawn.

Some years our run slows by mid September. However, I don’t think the run is going to be over soon. It actually started late. I think we are just starting to see the first part of the salmon run within the last five days. And, this year has been different. They aren’t coming in huge schools. If they were doing that it would be over quick. Instead, they are coming in smaller schools than in years past. They aren’t coming by the thousands. They are coming by the hundreds and more spread out. 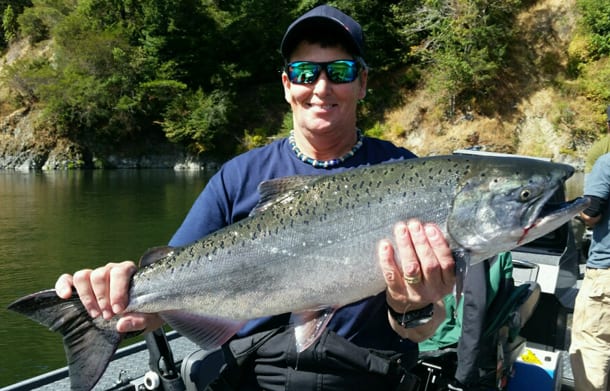 I think this is a good thing. The releases that were created by the Trinity River is enabling fish to migrate at a faster rate than they would if the water wasn’t there or was warmer. They are in a healthier state too because the water is cooler. We are catching some nice fish each day and there’s still some steelhead around. I think they steelhead are still here because the water was so warm early in the season (July & August) that they just weren’t coming in. The steelhead run is later than normal. And, the salmon run is late because the ocean was so warm. These salmon didn’t even want to come to the coast let alone come into the river. It was in the lower 60s in the ocean and it’s normally in the lower to mid 50s. 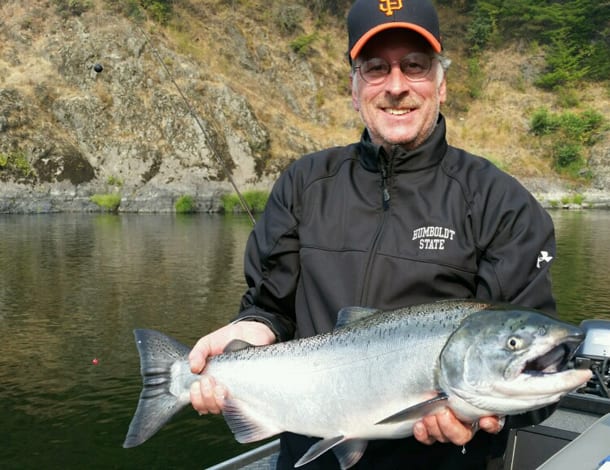 So far this hasn’t been a big fish year. The average fish is about 12 pounds. We are seeing a lot of two and three year olds this year instead of the four year olds we saw last year. It’s just a cycle we are in. So far the largest salmon we’ve seen has been roughly 25 pounds. We haven’t seen the huge fish yet. 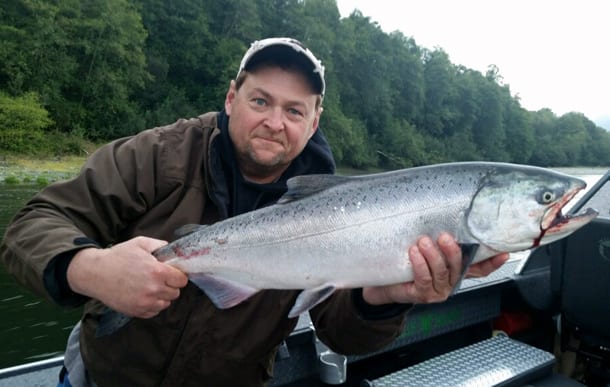 The higher flows haven’t changed how we fish. All it does is the give the salmon more real estate. Try to find the slower water that they are going to lay in. The Klamath is dominated by egg fishermen. Basically, everyone boondoggles and side drifts. I’m using mostly Red Fire Cure roe with a few different scents mixed in like shrimp and anise. I’m using nickel size pieces, maybe a big larger and fishing them on 15-pound P-Line CX, a 10-pound P-Line fluorocarbon leader and Size 4 Owner SSW hook. 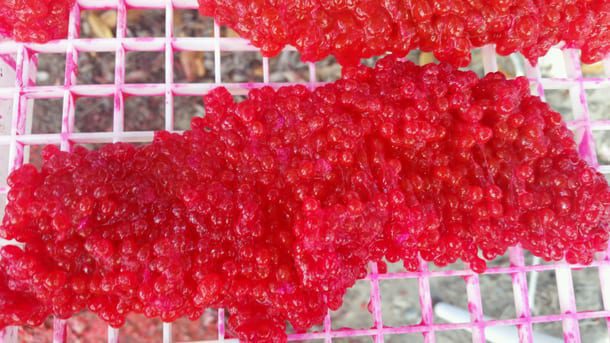 With the conditions we have now there will be three weeks of steady fishing ahead of us and then it will gradually start to drop off as fish migrate upriver. At that point most of us will head to the Smith/Chetco or to the Upper Klamath to target these fish.