I’ve been fishing daily on the west shore of Lake Michigan since April and fortunately the trolling bite has improved this year from last year. We’ve had a very good Coho bite because the bait is staying in Southeast Wisconsin. We have a very good lake trout population on this part of the lake, too. However, our king salmon bite has been fairly slow.

Typically, we’ll catch Coho as long as this bait hangs in the area. We are fishing the big hills offshore daily and as the bait remains here we’ll still catch these Coho through August. As the Coho start to travel more north in a few weeks the kings will move in. If I can get 10-15 Coho on a trip that’s a solid trip, which has been fairly normal. Keep in mind, we’ll get kings mixed in with those. 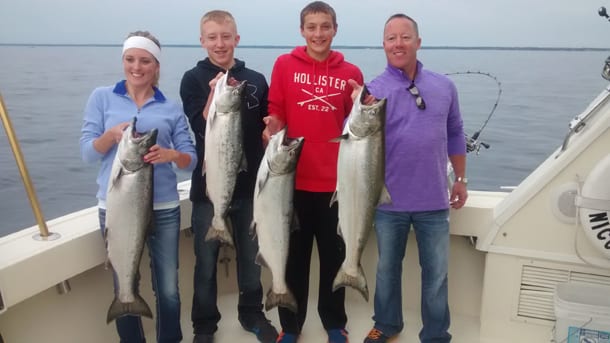 Right now for Coho and kings we’re fishing Kenosha and Racine in roughly 50 to 200 feet. Keep in mind, this changes daily, but those depths have been consistent. I’ve been catching them on bait, spoons and flies. When I’m running my bait I run it on my downriggers. On my two corner downriggers I like to match my bait so it looks like a school. I’ll run my two corners with herring brined in Chartreuse Fire Brine. I’m running them with a Dreamweaver 9-inch Spin Doctor and rigging the bait on a twinkie meat rig. I run them on 40-pound Blood Run Tackle fluorocarbon. 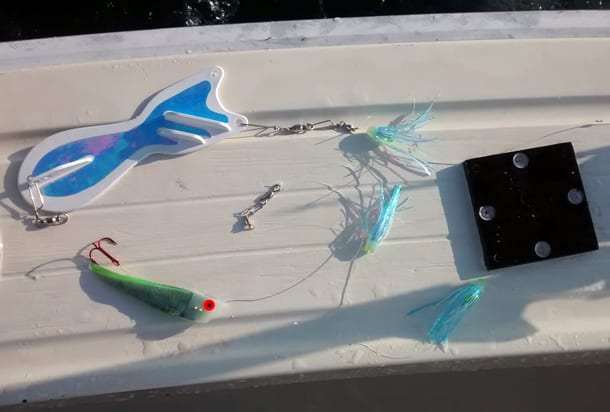 There’s a lot of brown trout in the area. In the mid teens down to 40 feet we’re catching plenty of browns, but I can’t get them to hit bait. If we opt to chase browns I’ll run all spoons. Normally, I drag Stinger UV spoons. This time of year greens, blues and golds serve us best. I use lots of Liquid Krill to scent the spoons for browns. It isn’t something I’ve been talking a lot about because it’s new around here, but those who have been on our charters see it daily.

If we have a strong west wind and the water drops into the mid 50s we’ll target the browns. We don’t want crystal clear water, but we do want a glare to it. When it’s too clear we can’t fish it because you can see the bottom. It’s too clear. As long as the water has some tint to it and its cooler than the upper 50s we’ll try for browns and catch them. 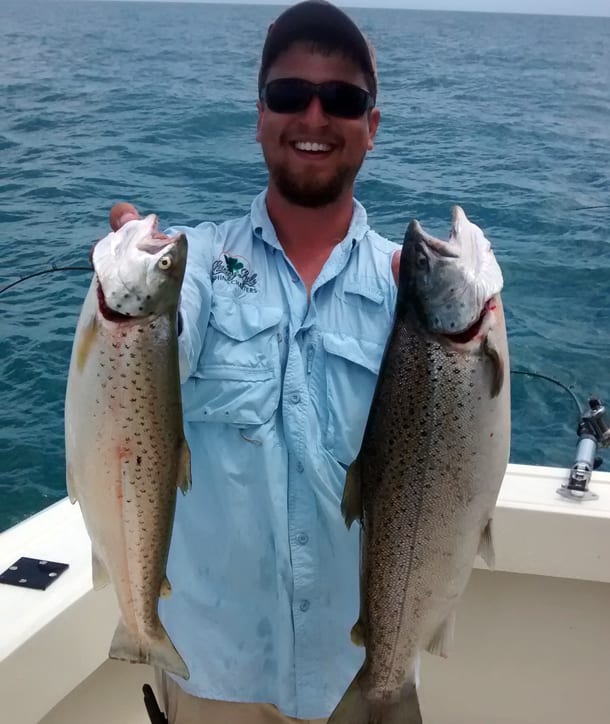 When we fish lake trout I’m normally trolling slow. I’ll run meat for them on 300 and 400 copper lines and I use 11 inch Hotspot Paddles with a regular meat setup (the same one listed above). When we target lake trout we’ll brine herring strips in Natural Fire Brine. We’ll continue to fish lake trout through the fall in 90 to 200 feet. I try to target 100 to 120 so I can bounce bottom. The farther I go out the more cable you need, so we tend to stay shallower.

King Salmon: Down, But Not Out

August is our best king month. These fish will be staging on our hills getting ready to head in and spawn. If I’m running 8-12 rods, eight are salmon setups. I run two meat rigs each trip (the Chartreuse Fire Brine herring). I’ll also run six flasher and Fire Flys combos and the rest spoons. 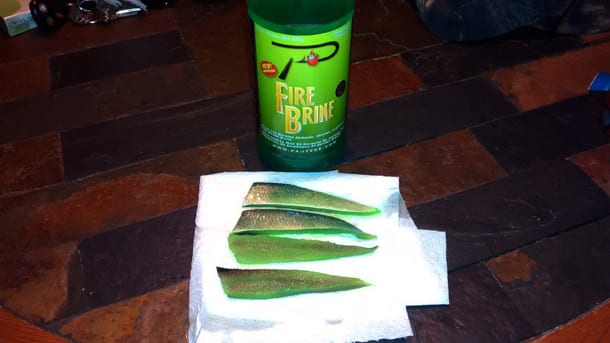 Meat was slow earlier in the season because it was so cold. I was wearing my winter jacket in June. It’s now a meat and flasher/fly bite. The meat rigs are getting hit all the time now. And, keep in mind, if you are running meat you are only catching quality fish. You don’t catch smaller fish on it. If you want to catch big fish run meat. Most of the old timers aren’t running bait, but the young guys are and doing well with it. More are converting each week. 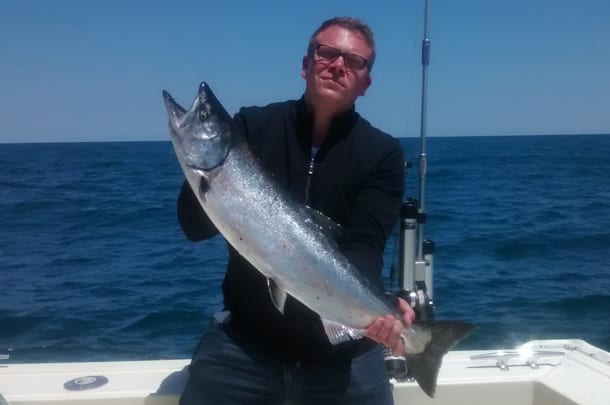 The king salmon in Lake Michigan is way down from what it used to be. Don’t get me wrong we are still catching them, but from what we used to catch it’s not as good as it used to be. We all know that’s because of the stocking. They are stocking much less fish. 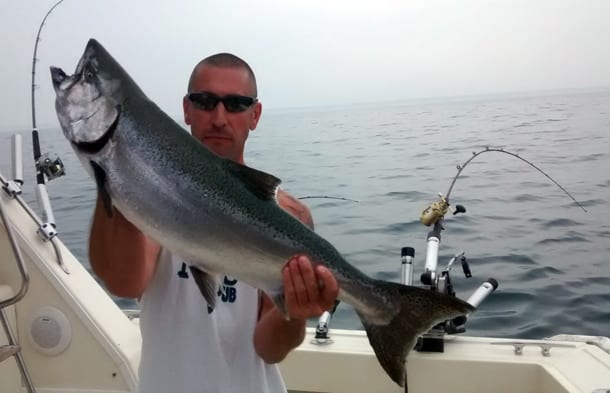 Chinook plants are way down. A few years ago there were no Chinook planted at all. They tell us they don’t have the money for it. They say we don’t have the alewives to support heavy plants, but that’s someone from behind a desk talking. We see as much bait now as we did 10 years ago.