It’s already been a good ice fishing season on Northern New Mexico’s Eagle Nest Lake and the good news is that ice should remain at least into mid March. It’s been two weeks since I was able to fish the lake, but the ice is still over a foot thick and the lake is open to ice fishing. Action has been consistent all season on various sizes of trout. Anglers have been catching fresh planters on up to 20-inch fish. The last few times I’ve been out we’ve caught about 15-20 trout. 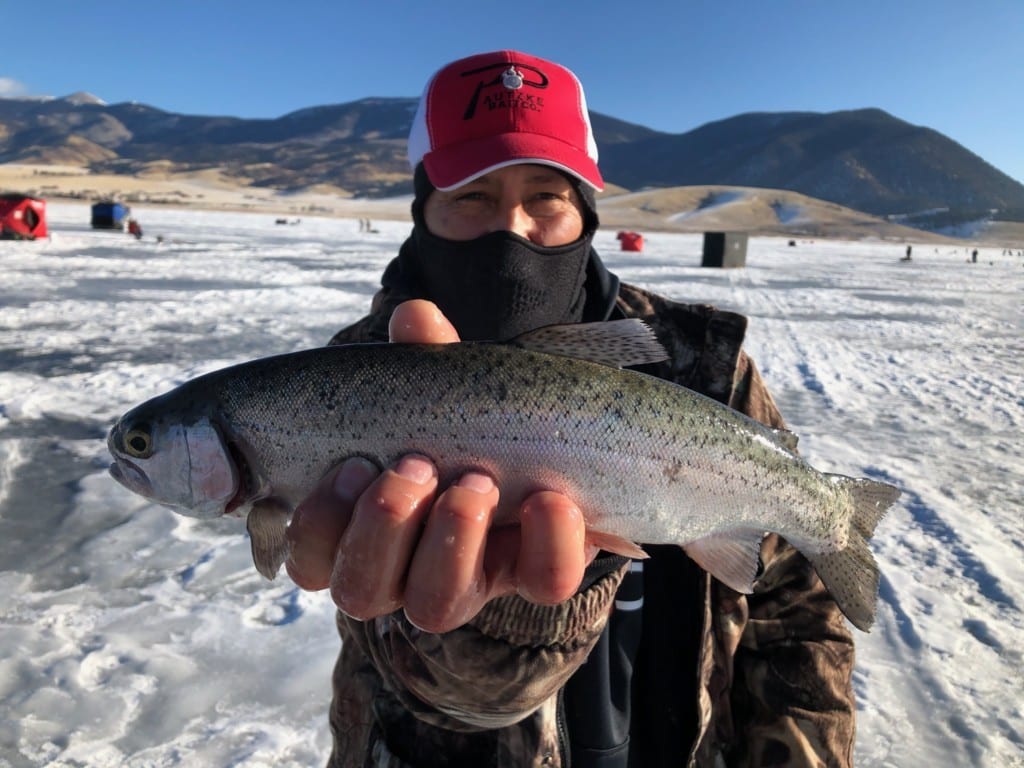 I participated in the recent ice fishing derby here (along with 400 other anglers) and saw plenty of trout being caught. As long as the ice holds the bite should remain steady. Early morning the trout have been in five to 10 feet of water. They tend to move out into 15-20 feet of water later in the morning. The trout tend to remain closer to the bank whereas species like the perch are further out. 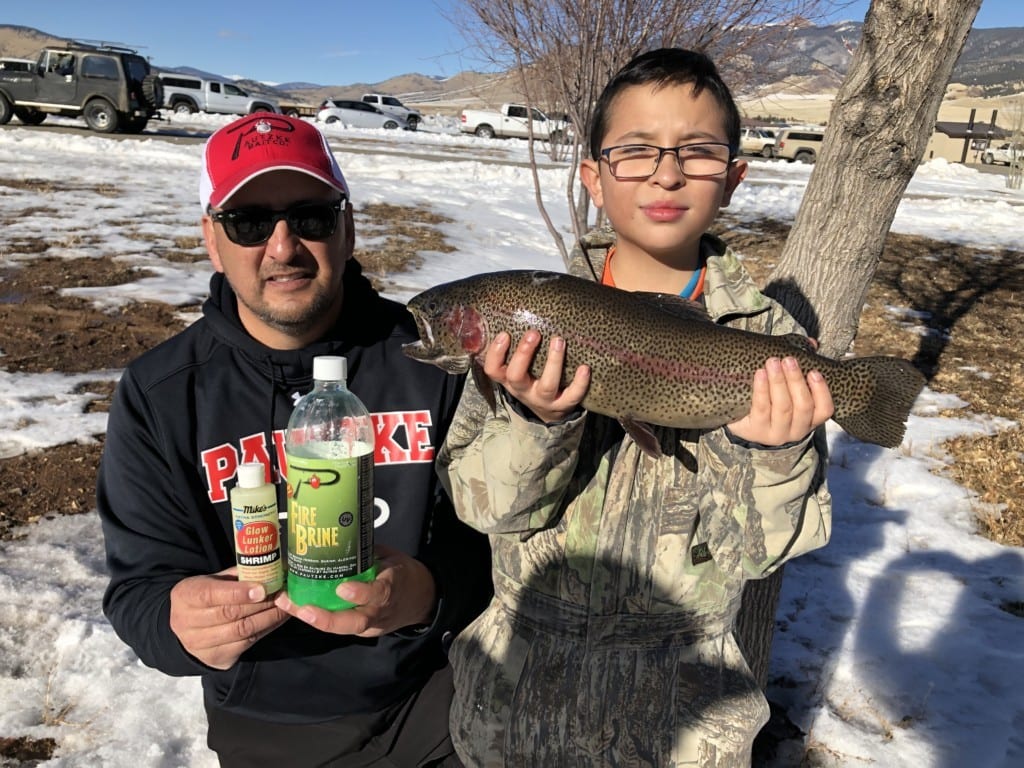 I use two techniques to catch trout. In New Mexico we can use two rods on the ice with a valid second rod stamp. I have a stamp so I’ll dead stick one rod and jig with the other. The reason to jig is to attract the trout from a long distance and if they aren’t being very aggressive with the jigging technique they’ll be more than likely to hit the dead stick. Having both rods out increases your chance of success.

My favorite technique has been using Chartreuse Fire Brine shrimp. While still new to most New Mexico anglers the shrimp stays on the hook well and is something different so the trout aren’t conditioned to it. I also like shrimp because one piece goes a long way as long as it’s brined. By brining the shrimp in Fire Brine it toughens the shrimp so you can use smaller pieces without it falling off the hook. The chartreuse color seems to be the best producer this season. I have been fishing a piece of shrimp the size of half a penny and placing it on a 1/32 to 1/64 ounce ice jig. Because trout aren’t extremely active below the ice during midseason I’ve been scenting the jig with Atlas Mike’s Glow Lunker Lotion. When charged this scent glows beneath the ice. The glow and shrimp scent attracts trout. 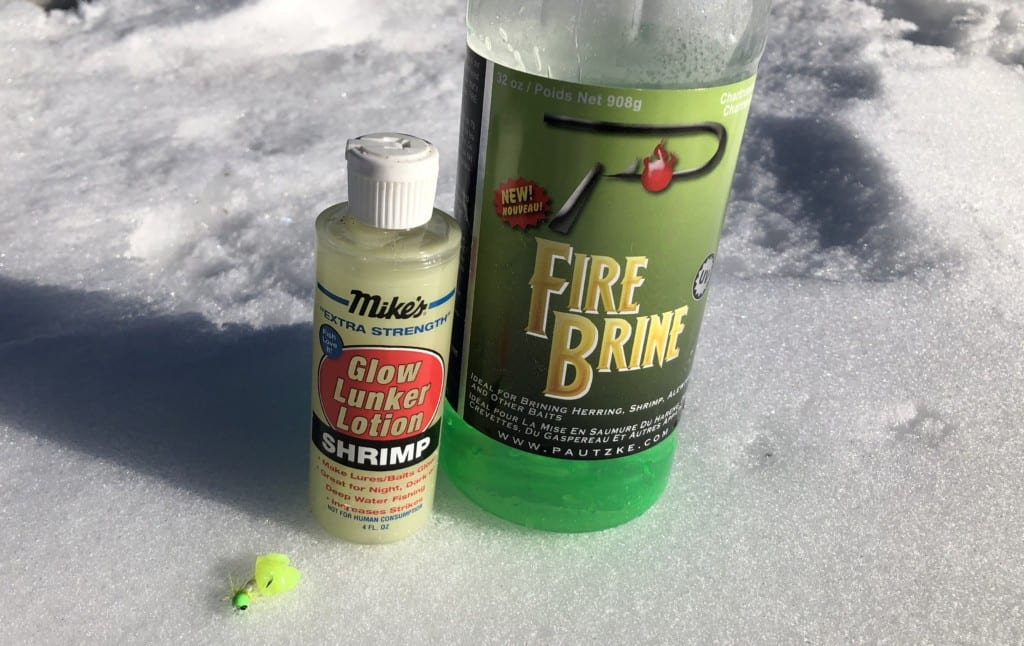 Micro jigs have also been productive. This last time out I used a red micro jig tipped with a Pink Shrimp Fire Ball. I’m doing this because the Fire Ball stays on the hook better than real salmon eggs and also has scent. Without the balls bites were less frequent. 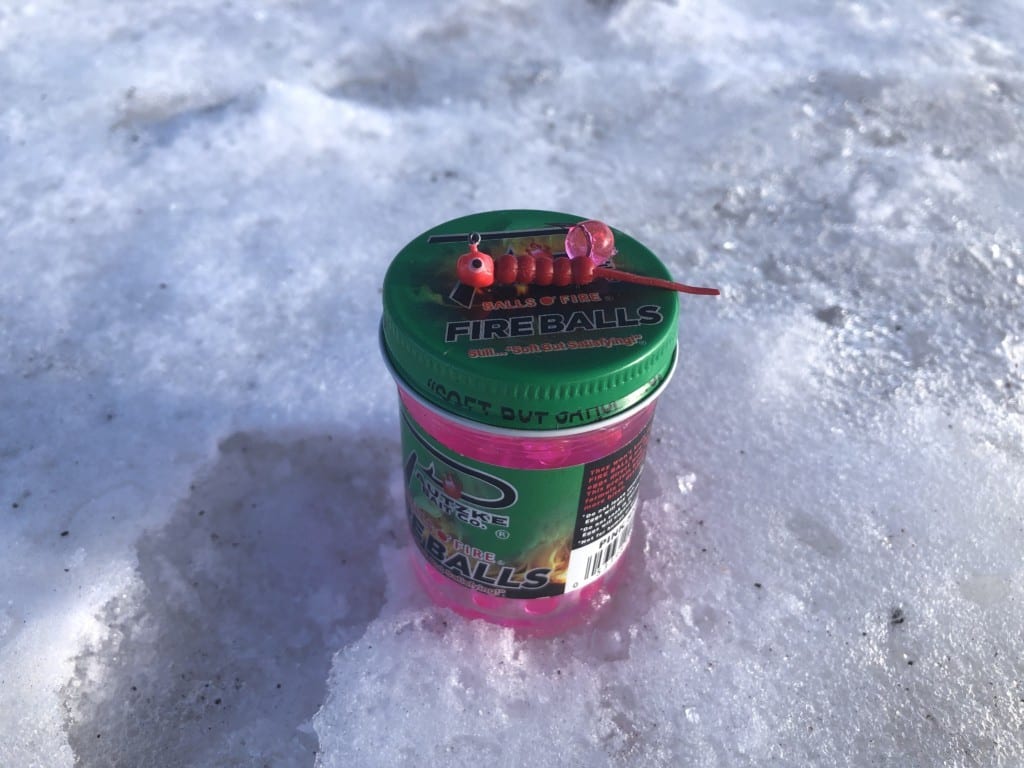 The great thing about Eagle Nest is that if action slows for trout you can move out into 40 feet of water and use the same tactics to catch perch all day long. The lake is loaded with 12-inch perch.

Editor’s Note: Joe Vallejos is a lifelong New Mexico resident who lives to hunt and fish.