While most Pacific Northwest anglers are focusing on steelhead during the winter months, more and more are discovering the thrill of catching shallow-water, light-tackle lingcod when there are breaks in the weather along the Oregon Coast.

Unlike most areas, Oregon has a year-round lingcod and rockfish season. And some of the best fishing of the year takes place from December through May when lingcod move into shallow water to spawn. Always ferocious predators, lingcod are even more aggressive when in their spawning mode. Anglers can use that bad attitude to their advantage. 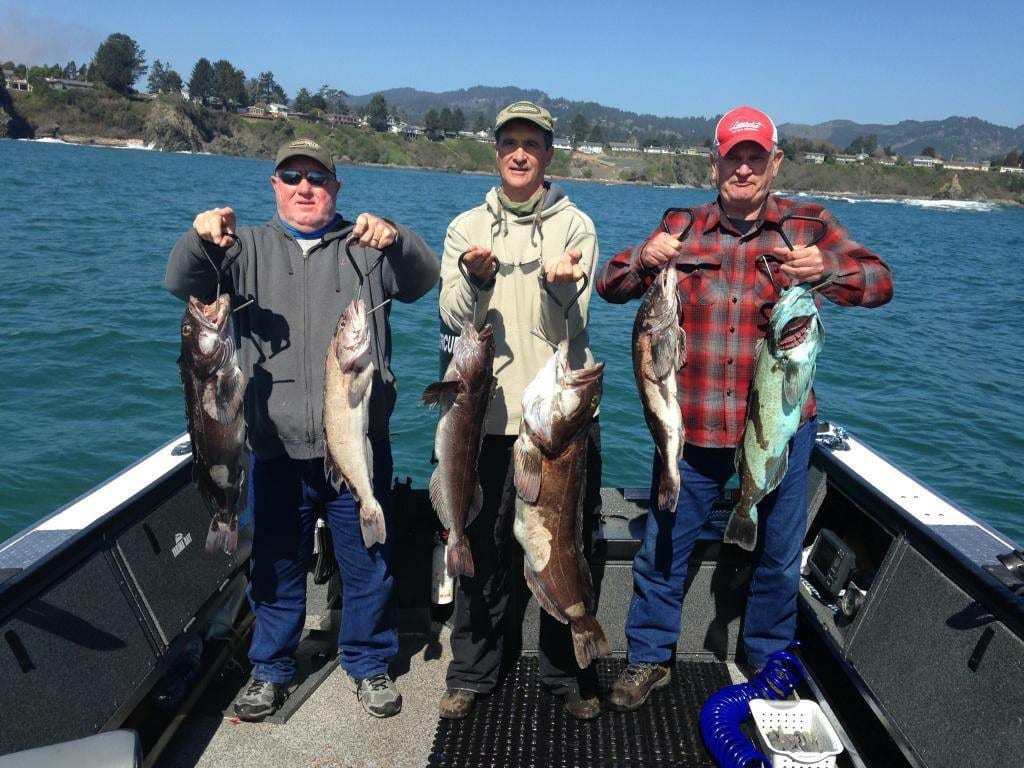 (Customers of guide Andy Martin of brookingsfishing.com hold limits of lingcod caught last March out of the Port of Brookings.)

Lingcod migrate into shallow water during the winter months to spawn. While they are often found in deeper water much of the year, they spawn in depths between 40 and 60 feet. They like rocky crevices and rugged bottom structure to spawn. The larger females will lay an egg mass on the shallow reefs, then retreat back to deeper water. Several smaller males will stay behind and guard the nests.

A single nest may have half a dozen or more males guarding it. Catching a few of these males does not threaten the health of the overall lingcod population, which is currently thriving in Oregon, according to state biologists.

I like to target wintertime lingcod with light tackle. Because they are in shallow water, you can get away with lighter spinning rods. I use rods rated for 8 to 17 pound line, and use 14-pound FireLine. It allows you to use less weight, preferably 2- or 3-ounce jigheads.

(A leadheaded jig tipped with a rockfish belly marinated in Pautzke Halibut & Rockfish Nectar is the equivalent of Lingcod Candy.)

Because we also target rockfish during the winter, I like to rig up a shrimp fly or grub rig and use the jighead tipped with the rockfish belly at the bottom. That way we catch lings and rockfish at the same time. The bellies are marinated in Halibut & Rockfish Nectar.

(While filleting a rockfish, guide Andy Martin cuts away the rib bones, which he saves for bait during his next trip.)

Jigheads with a rubber scampy or large grub will catch lingcod without adding bait. But I’ve found they work much better when you tip them with some kind of bait. It’s hard to beat the rib bone meat from a rockfish fillet. Lingcod already eat rockfish, so it’s a natural food, and they also are guarding nests from rockfish that would eat the eggs. Most people throw the rib bones away. Instead of tossing them, save them for bait. They can be used within a couple of days, or kept frozen until your next trip.

When they encounter a jig tipped with bait, lingcod will hold on after longer hitting, and strike much more aggressively. Anyone who has done much jigging knows how lings (and halibut) are notorious for quickly biting and then letting go. Jigs combined with bait fish much better.

(Soaking the rockfish rib bones in Pautzke Nectar makes them even more effective.)

I soak the rockfish rib meat in Pautzke Nectar (or Halibut & Rockfish Nectar) overnight before fishing them. The Nectar makes the baits even more effective, as it creates a potent scent trail lingcod and other fish will follow right to your offering. Aside from lingcod, halibut love rockfish meat marinated in Pautzke Nectar, as salmon (Nectar comes from salmon eggs) is a main food source of halibut.

The rib cages are placed on the jighead hook. The rib bones make the bait very durable, and prevent them from falling off.

Stormy weather is common during the winter on the Oregon Coast, but there are windows of good ocean conditions. The ocean is often calm between storms, allowing anglers to get out and chase lingcod. Brookings, Coos Bay and Newport often have the calmest ocean crossings during the winter. Brookings is especially popular because its harbor faces south, and is protected from the northwest swell common on the Oregon Coast.