Heavy rain blew out Pittsburgh’s Montour Creek over the weekend. The creek ran high and muddy Sunday and Monday before returning to a somewhat normal flow yesterday. As the creek dropped we migrated from Central to Western PA to film Pautzke Outdoors hoping the creek slowly cleared as we arrived.

Fortunately, there was enough visibility to start sight fishing for trout. I followed James Swearingen of Steel City Anglers as he took us to one of his favorite holes. There was an angler in the top end. However, the lower end was open. Swearingen and I walked to the edge of the mildly sloped bank, put on our polarized glasses and scanned the water for golden rainbows. There were none.

“I’ve been here for a few hours,” said the man fishing upstream. “There’s no trout in there. Those are all carp.”

I looked at Swearingen, smiled and asked him to catch a trout on his first cast. He asked for a challenge and laughed at me. He then caught 10 rainbows on his first 10 casts (and also had three doubles in a row with a friend of ours). The man (who had two trout on his stringer) was in disbelief. I put the camera down, walked over to him and handed him a jar of Pink Shrimp Balls O Fire salmon eggs. He then got bit on his first cast, too. We then all laughed and celebrated together. 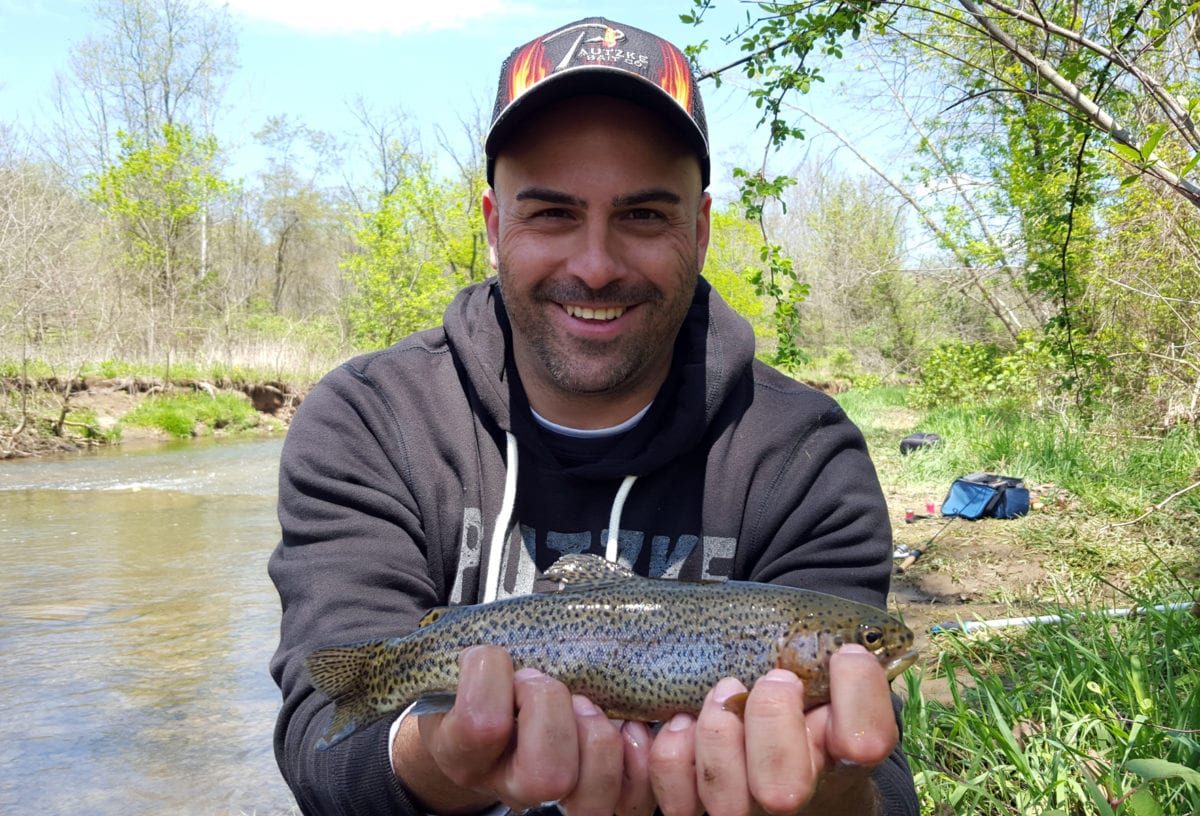 An hour earlier I was quiet, more notably nervous that we’d flown across the country and would be sidelined by poor water conditions. Fortunately, in the first 20 minutes we caught and released roughly 15 trout, most of which were rainbows and a few brook trout. The pressure was off. We literally filmed an entire episode in 30 minutes. Ironically, the creek is being stocked today. Our success come on heavily pressured trout that were stocked in mid April. 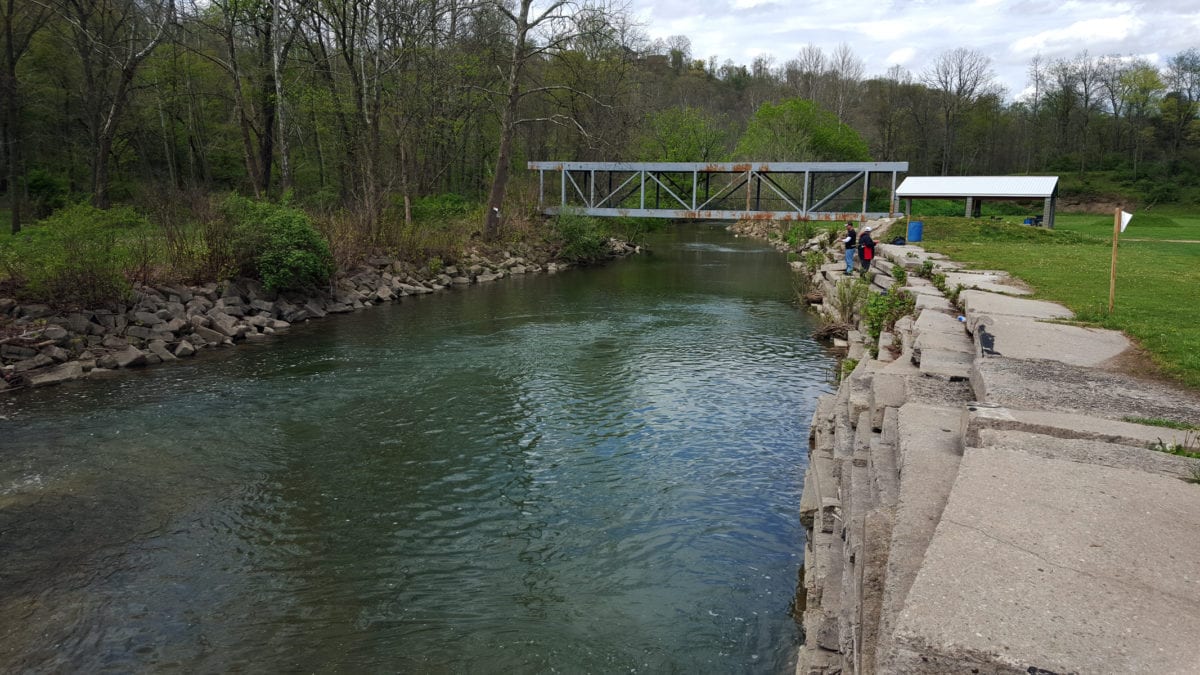 Of the dozen people we saw on this 200-yard stretch of the creek near Moon Township and Robinson most struggled to generate strikes. Meanwhile, we used Balls O Fire salmon eggs and light line to land more than three-dozen trout on film in a few hours. Unfortunately, we couldn’t get the one brown trout we saw to bite, but did land a brookie that looked like a crossbreed with a tiger trout, and several other brooks. 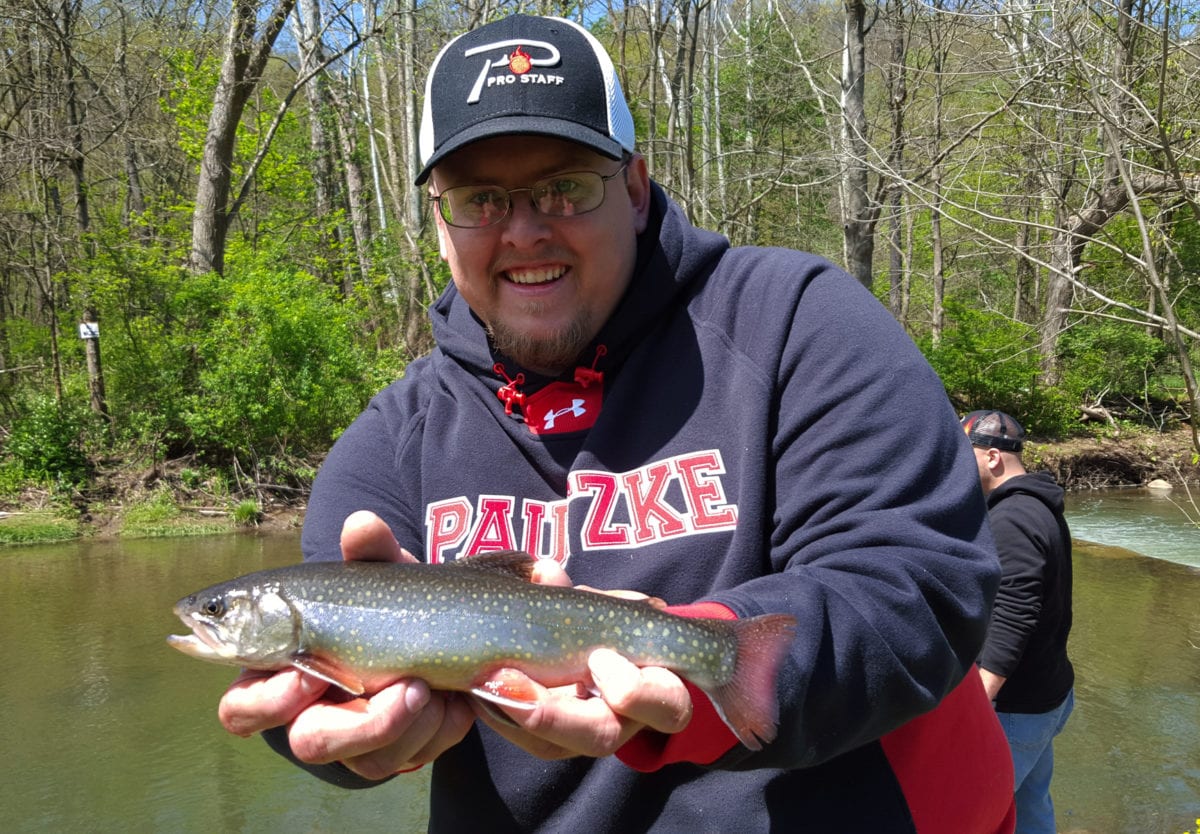 Most of the trout were holding in obvious pools, although we did find a few in slots and runs. The key was arriving with an assortment of eggs. While the new Natural Deluxe caught the most as soon as the trout became conditioned to those we switched to Chartreuse Garlic, Pink Shrimp, Orange Deluxe, Yellow Jackets and Gold Label and caught fish on all those eggs. While other anglers walked by and made a few casts with one style of egg we tried several before moving on and caught fish every time, but not often with the first style we pitched. 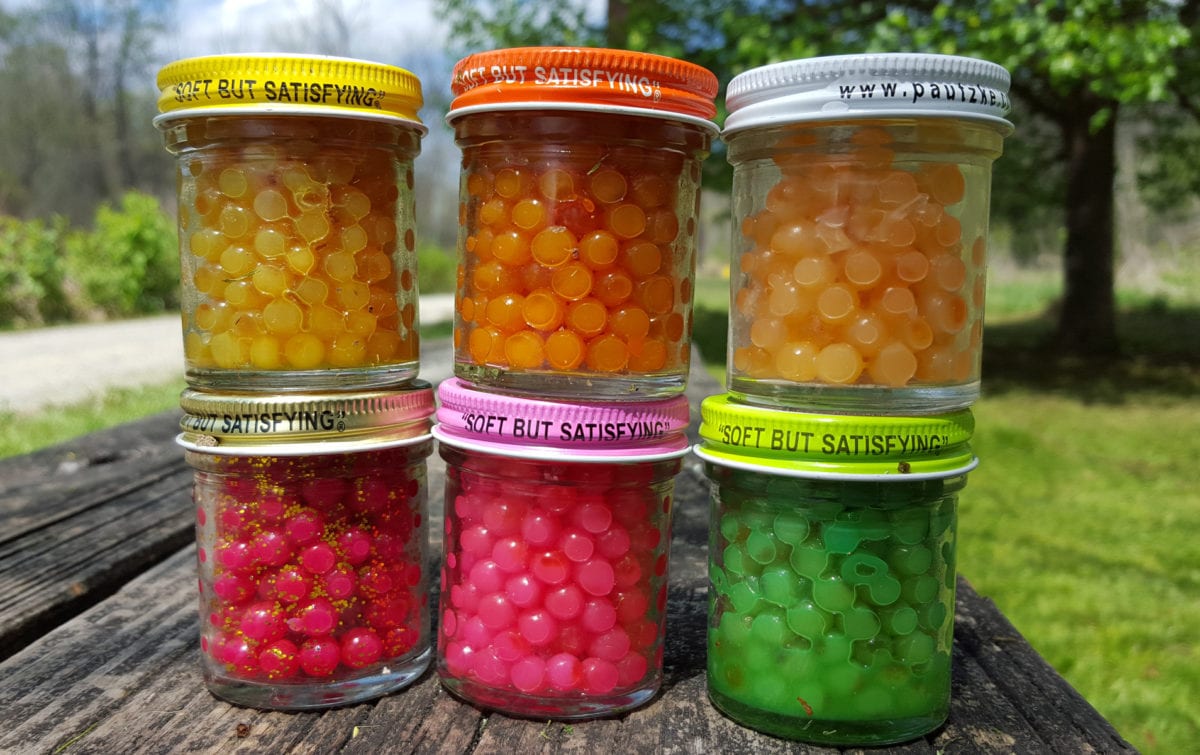 It’s important to arrive with light line. Swearingen and my buddy (I didn’t make a cast) used four-pound Berkley Vanish, a size 14 Raven hook and 1 BB Water Gremlin split shot to drift the eggs under a Trout Magnet float. The float was employed to keep the eggs free drifting without getting hung up. While we normally use one single salmon egg Swearingen slid on three or more. He wanted a larger profile in the stained water. As the creek clears you’ll find success using fewer eggs. 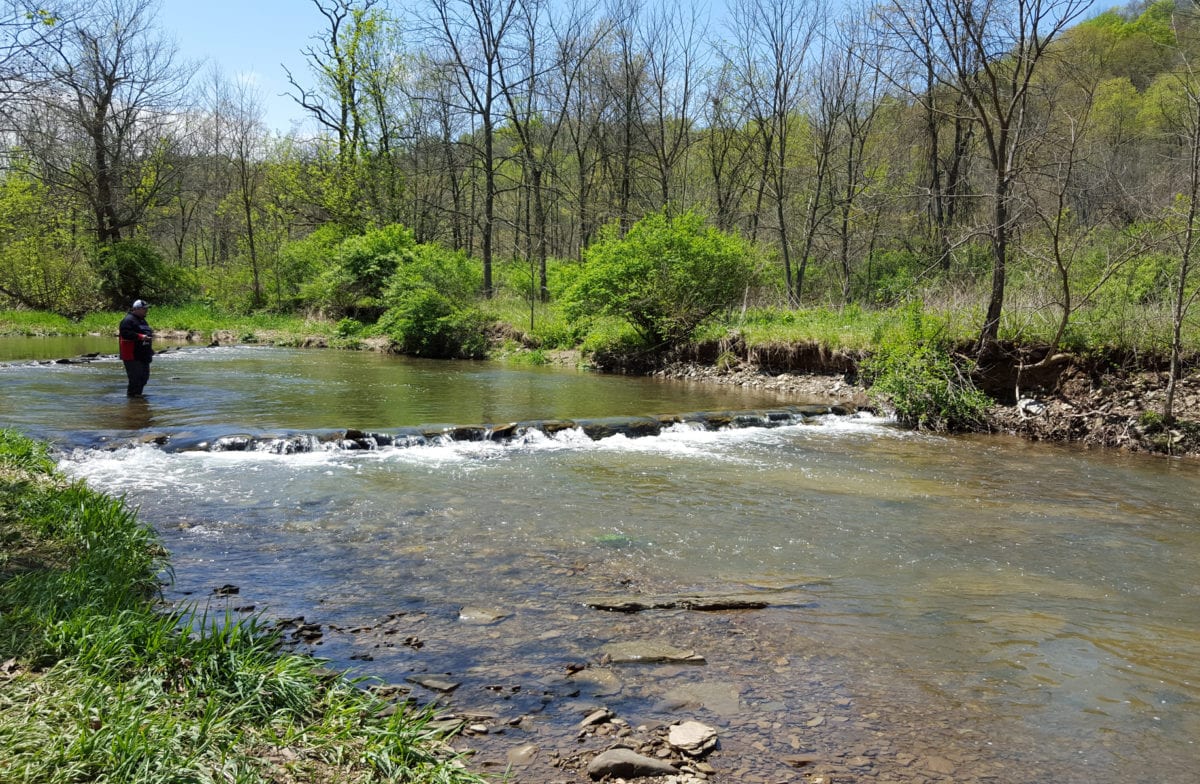 With midweek here there’s plenty of trout left in the system to warrant a trip. Local clubs and the Pennsylvania Fish & Boat Commission have stuffed the creek with trout. Most of the fish are averaging 11-13 inches. However, we caught a few that might have touched 16 inches. There are miles of public water to target with eggs. Slide a few on your hook and you’ll find the success we did. 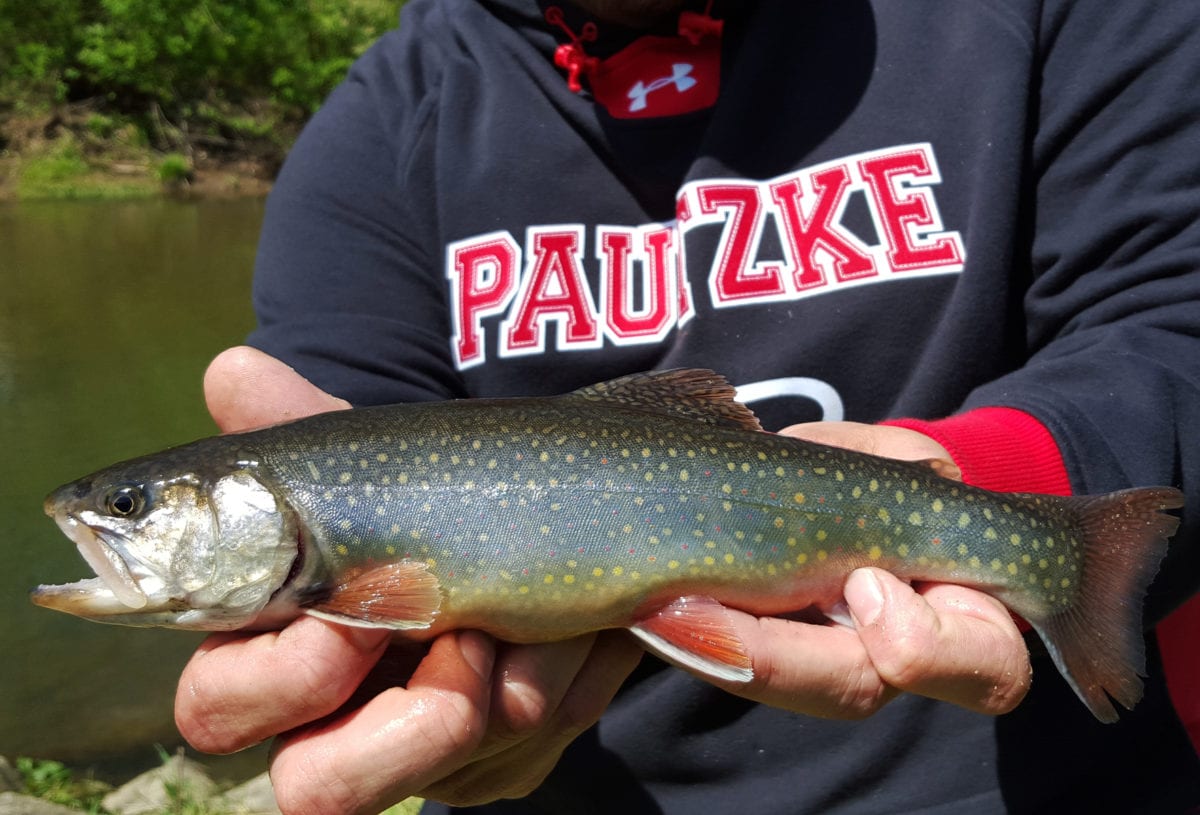