The entire month of October tidewater salmon fishing in the Tillamook area was awesome because we didn’t have early rain this year. Therefore, the salmon stayed in the bay and tidewater rather than heading upriver to spawn. Had it rained, an increase in river levels would have drawn the salmon out of the system and into tributaries. Instead, they stayed in the tidewater and there were more fish than we are used to seeing.

In the last 10 days the Oregon Coast has seen some rain and many of our fish are now in the local rivers. On the other hand, tidewater fishing will remain good throughout November as fish continue to migrate out of the ocean on towards the rivers. This year’s run has been good. We’ve had a lot of really good days. It hasn’t been excellent, but I’d give it a solid “B”. What’s been most notable this year is the number of large fish we saw early.

Late September and early October we saw a lot of big salmon. And, actually there’s still been some large fish around. The average fall Chinook has been 20 pounds, but we are seeing plenty of 30-plus pound fish. I’m expecting another push of large fish late this fall.

Many anglers have moved to the rivers. Nevertheless, the tidewater is still fishing well. We fish the Tillamook area tidewaters three ways. We use cured eggs, brined tuna and sand shrimp, which is no secret to anybody. In fact, some guys mix these baits for added scent.

During an outgoing tide focus on the deeper holes. In fact, fish them through the turn until there’s an incoming tide. Right at the tide change we usually get a bite. On the incoming tide I try to find more choke points where fish would be traveling to.

Because of the lack of water we’ve had this fall the perch and sculpin have been unbearable. It’s been nuts. You’d cast out and within five feet your bait would be gone. Those pests would eat the bait that fast. Because of this I started taking my roe and putting it in spawn sacks. These spawns sacks aren’t the small ones you’d see in the Great Lakes. I’m using a large spawn sack the size of a golf ball.

Let’s focus on what kind of eggs you’ll want to put in these sacks. These early fish like hot eggs. I’m using a wet brine that I like to call the Kitchen Sink. People think I’m crazy for using this much stuff but it’s catching me tons of fish.

Mix the following in a container:

Place skeins into the mixed solution.

Drain the liquid from the container. If you’re eggs get smaller and tough drain them off and add Red Nectar. It will plump them back off. Otherwise, they are ready to fish.

Place tuna bellies in container and cover them in rock salt.

Before fishing cut them in one-inch squares. They are now ready to fish. 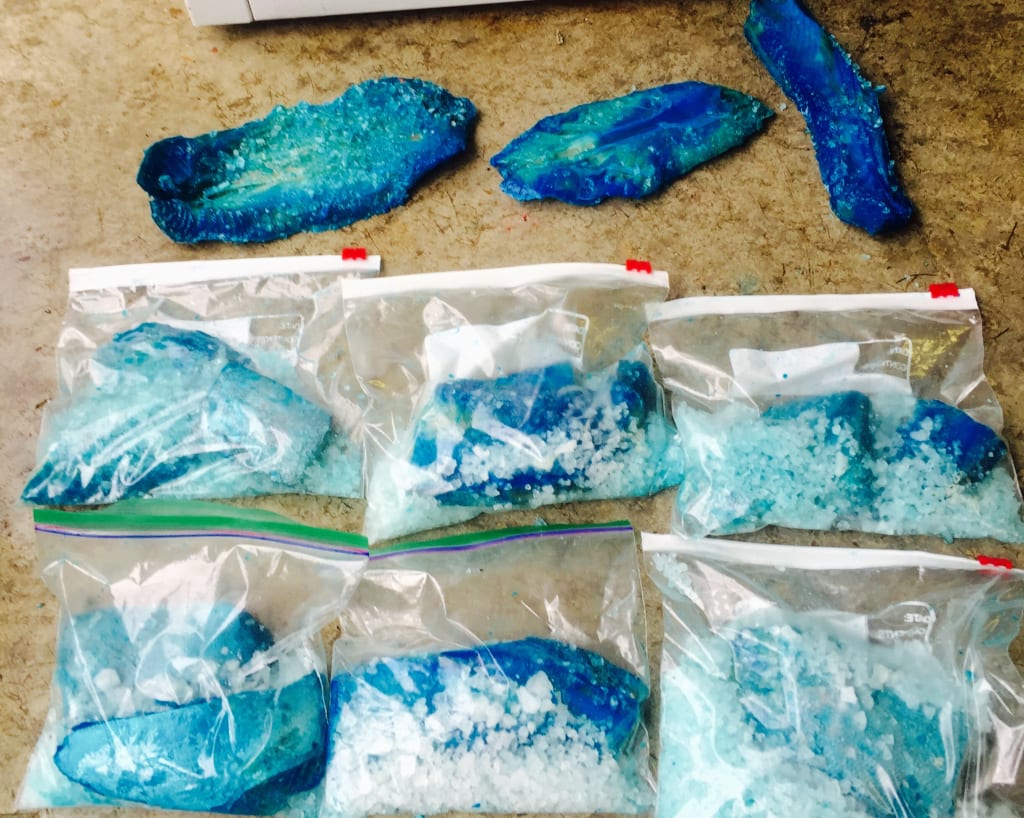 Editor’s Note: Anglers may keep two salmon per day in Tillamook Bay and the tidewater area. They can be hatchery or wild. For more information on Big Dave’s guided salmon trips please visit www.bigdavesfishing.com or www.wilsonriverlodge.com.