It’s been rainstorm after rainstorm after rain storm in the Pacific Northwest. I’ve been fishing high water the last three days, but it is fishable. The fish do travel when the water is rising. They have a mission to get upstream and they are going to do it regardless of how high the water is. When targeting high water salmon staying tight to the bank is best. If you put in time and have patience you can still do ok in high water.

You can play hopscotch and bounce around from area to area, but its better to stay in one area and wait for the fish to come to you, especially if you know it’s a good traffic area. If you aren’t familiar with the traveling lanes keep you’re eyes open and look for the rollers. Be aware of what the fish are telling you. If you see them rolling or jumping you should probably be fishing in that area.

In high water, like we have now, I’m usually waking up later. We’ve been going out to breakfast first and taking our time. The key to success is running plugs. You’re using a larger lure and a bigger profile, which is necessary when there’s only 10 inches to a foot of visibility. The plug helps creates noise and vibration, which creates a reactionary bite. 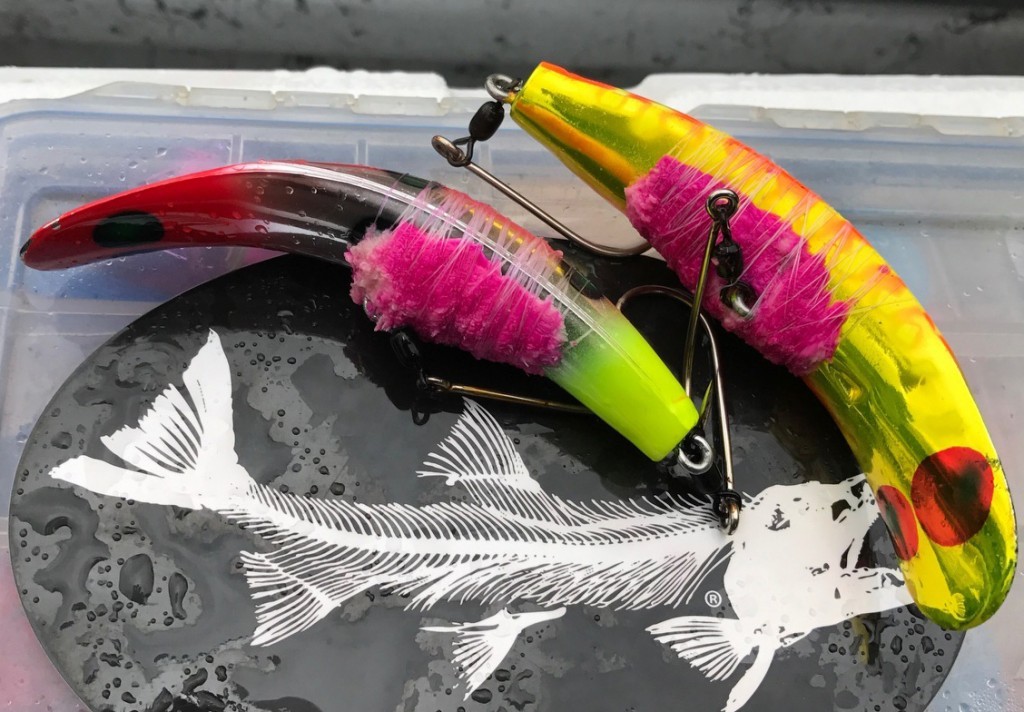 Some guys have been doing it for a while, but tuna is becoming a mainstay for plugs. The tuna seems to be more durable and lasts longer than traditional sardines do. I can’t say tuna brings more bites than sardines do, but they both work. Oftentimes we can’t find sardines anyway, and when you can’t tuna is a great alternative.

Tuna has a potent scent. It’s also easy to take out of the can and smash it to create a fillet. Wrapping cured tuna to plugs is a way to generate more strikes. I cure my tuna with Fire Brine and will explain how easy it is. On thing to consider is tuna hasn’t replaced sardine wraps for me. I always have both on the boat and let the fish tell me what they want.

I use albacore tuna in water. This is the same stuff you make sandwiches with and it can be purchased at the grocery store. The reason I use tuna with water and not oil is because oil rises in water. If you get the tuna in the oil the scent is going to float to the surface and you won’t have that scent trail that you want. 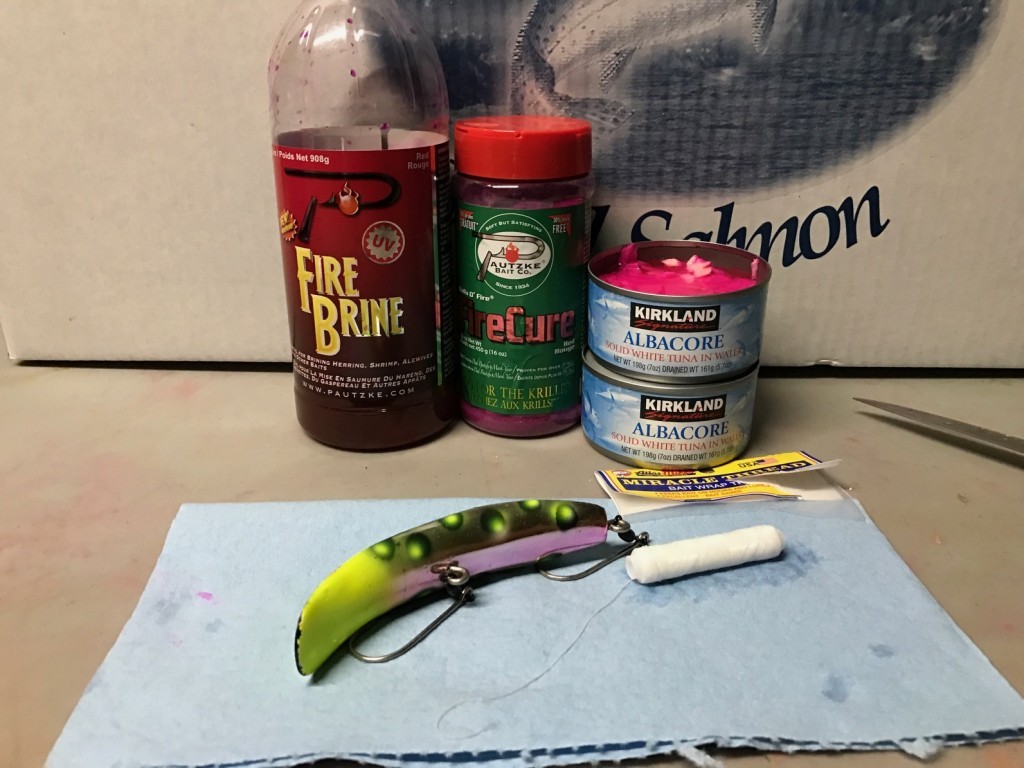 The reason I use Fire Brine is to add color and UV properties to the tuna. In the dirtier water we believe the UV stands out. The Fire Brine also toughens up the tuna, allowing it to remain usable through multiple bites. I use Red Fire Brine and pour it into the can of tuna. Let it sit 24 hours. I like red because it stands out in the green or brown water.

If you’re looking at the can you’ll see there’s flakes. I’ll try and separate them with a knife or scissors and grab two flakes. Then I’ll smash the tuna between my fingers to pack it together. 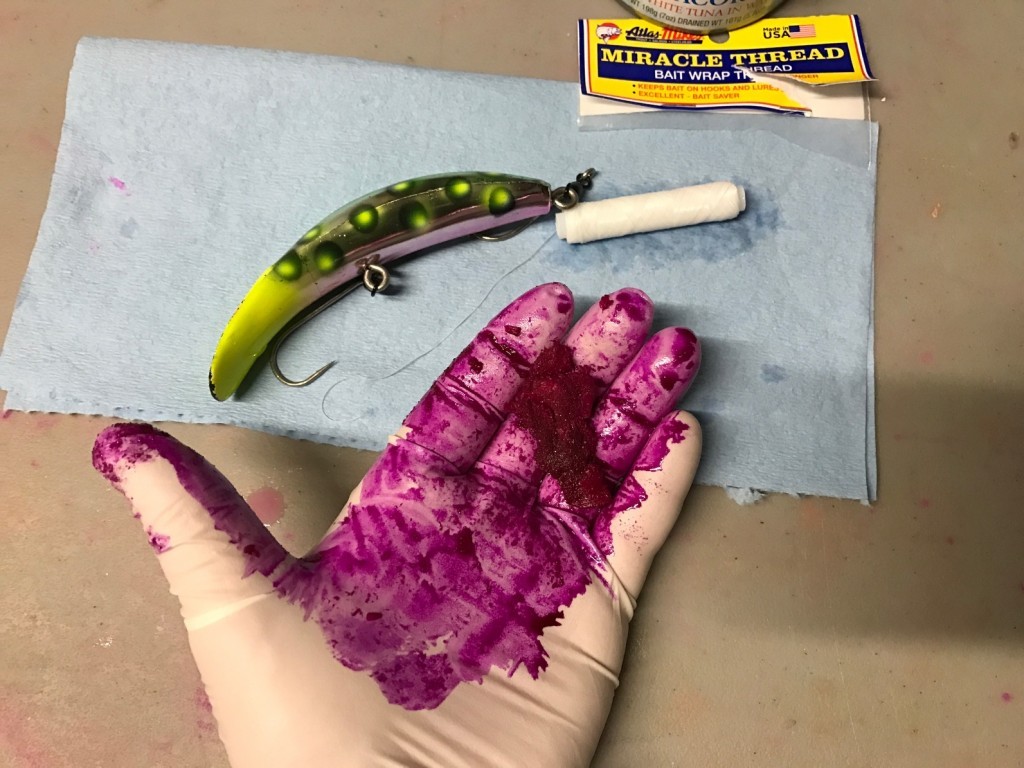 Once I’ve formed a good fillet I’ll apply it to the belly of the plug and wrap it tight and thoroughly to the plug with Mike’s Miracle Thread. At this point you’re ready fish. It’s that simple. 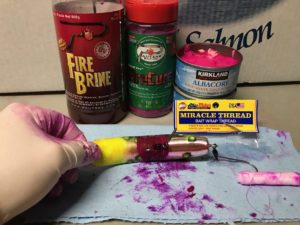 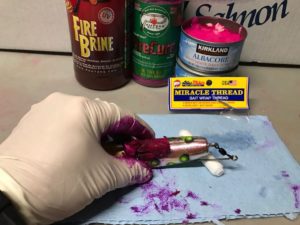 This time of year there’s coho, Chinook and chum in the Northwest. If I’m targeting Chinook exclusively I’ll take some Red Fire Brine and rub it on the tuna prior to fishing. What this does it adds sulfites to the bait, which we all know triggers a Chinook bite.