While it took two hours to run from Valdez Harbor to the Gulf of Alaska, it took less than a minute to catch our first lingcod. And, literally a minute more to catch our second, third, forth, and so on. The lingcod bite was so hot that after two hours of nonstop action I started to get cramps in my biceps.

Bottom fishing was as good as I remember nearly 15 years ago when I first starting coming to Alaska. Meanwhile, outfitter Tim Bouchard wasn’t impressed.

“We need to move,” he said. “After we caught and released a dozen lings between 20-30 pounds. This is fun, but these aren’t the big ones I was hoping to catch.” 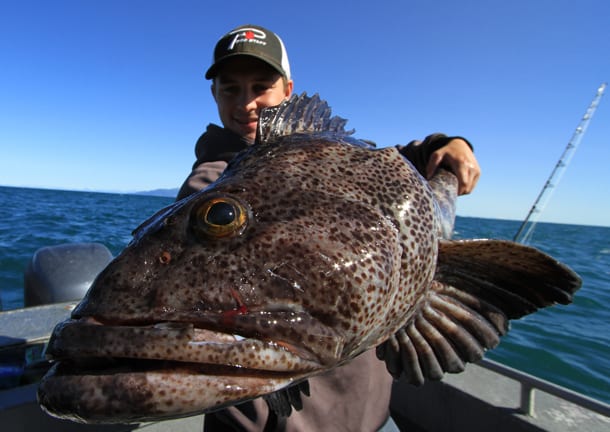 I shook my head and laughed. My fishing buddy Joey LeFebvre didn’t want to reel up and move.

“I’ve been fishing on the Oregon Coast for 20 years,” LeFebvre told Bouchard. “And, every fish I’ve caught so far is bigger than my largest caught in California and Oregon.” 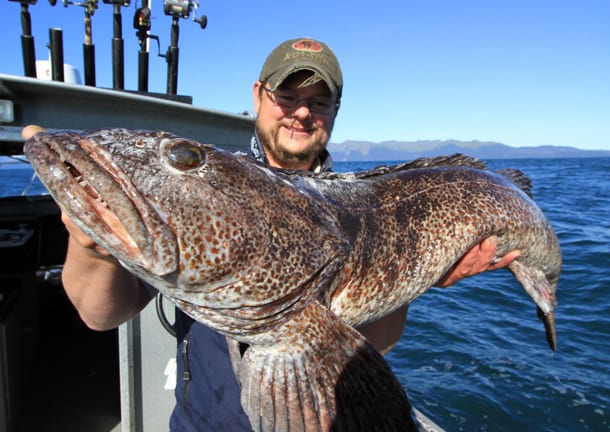 Bouchard, owner of Valdez Outfitters, didn’t budge. We were moving. He ran us a mile further into the Gulf of Alaska and dropped again. We caught another dozen lings, all from 20-30 pounds before Bouchard wanted to move again, citing fish that were too small. 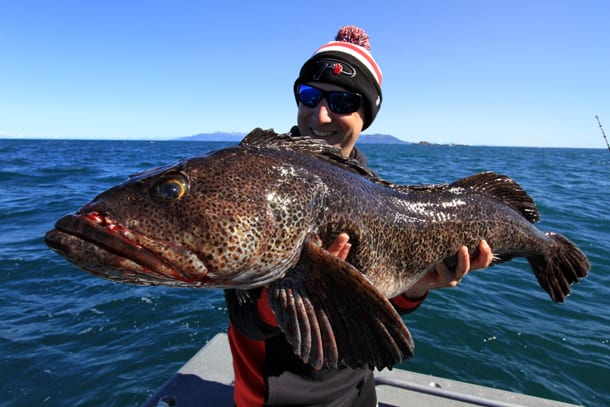 We weren’t against it. However, after 30-40 lings between the three of us in fewer than three hours we wanted to try for halibut and yellow eye limits. We conned Bouchard to scratch the ling search and focus on other species. Not surprising, Bouchard had yellow eye spots ready, too. We all caught limits in two drifts, including some awesome fish.

It was a quick lesson to why Alaska remains the dream destination for bottom fishing and more important provided great footage while filming Pautzke Outdoors. Could we have caught a few greater than 50 pounds? With Bouchard, I’m sure, but with only one day to film, the 40 we caught in two hours was enough. Action was nonstop, even in the wake for three days of high seas and turbid water conditions.

Our fishing didn’t take much effort, likely because we had a captain that was well versed in fishing the region. Bouchard knew every point, pinnacle, rock pile, shelf and drop-off in roughly a 100-mile section of water. 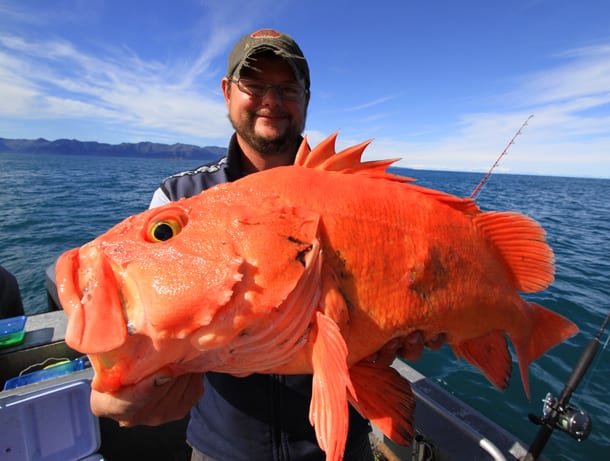 While simply dropping a Diamond jig down to the bottom instigates plenty of strikes from the lings, we applied two techniques throughout the day: adding one to two scented whole herring to grubs fished on a large jig and also tipping medium size jigs with pieces of scented herring. All our herring were soaked in a mix of Natural Fire Brine and Halibut & Rockfish Nectar. On the small jigs targeting black bass and yellow eye we tipped Chartreuse Fire Brine herring on them. This provides a UV boost and lots of scent. 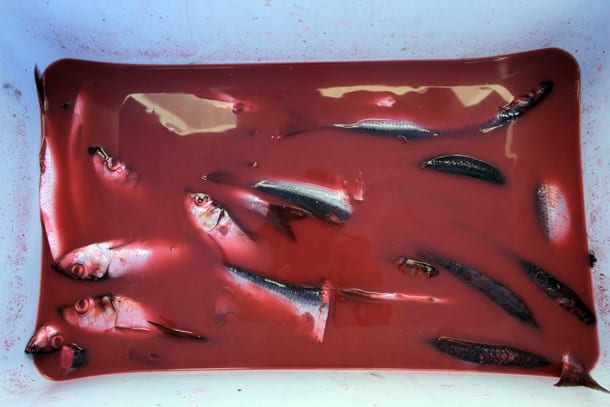 Bouchard’s herring scent/brine isn’t like most. He goes large. He starts by dumping the bait into a small cooler (and by bait I mean a 20-pound box of frozen herring) and allowing it to thaw. Keep in mind, with several anglers on a boat and targeting multiple species you need a lot of bait and you don’t want to run out a two-hour boat ride from the dock. 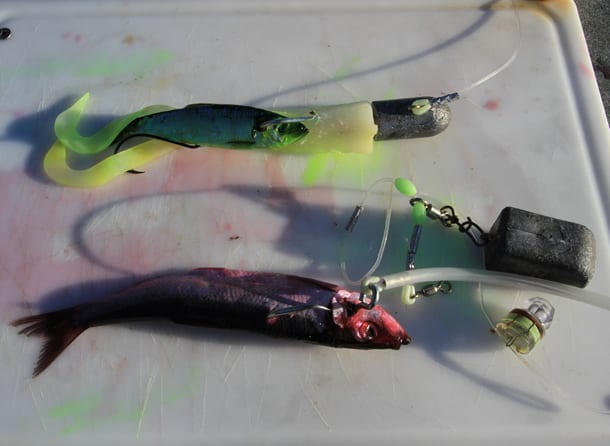 Once thawed, he’ll dump in two bottles of Natural Fire Brine. This helps keep the bait from breaking apart and toughens it up since it’s going to be sitting in a cooler all day. Then he dumps five bottles of Halibut & Rockfish Nectar in the cooler and lets the bait sit overnight. The herring will absorb the Nectar and slowly emit the scent when dropped to the bottom. More scent equals more bites from lingcod, yellow eye and other bottom fish. 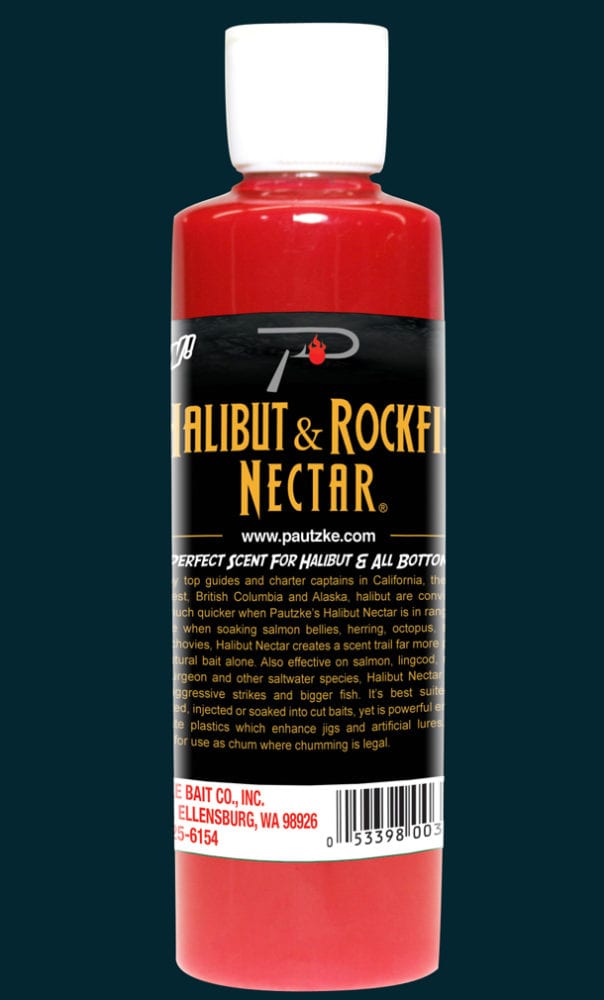