If you live in Metro Vancouver and enjoy fishing October and November are excellent months. During the fall millions of Chinook, chum and coho can be seen travelling through the Lower Fraser River. Bait fishing is permitted now in the tidal portion of the Fraser River, downstream from the railway bridge in Mission. For at least six weeks you have lots of opportunity to catch these salmon during every incoming tide. Here is how to do it successfully.

These fish can be targeted by using a variety of methods, but the most commonly employed technique is plunking with roe from shore. Traditionally, anglers have always used fresh roe that is coated with borax. While this catches fish, fresh roe that has been properly cured with Fire Cure definitely out-fishes all other baits. My personal preference is Red Fire Cure, which gives my roe a bright red colour, so it stands out in the silty water. Once cured, dry your roe properly so it can stay on the hook and bait loop a lot longer. The krill scent emitted from the cure also makes the fish bite onto your bait a few seconds longer, allowing you to set the hook in time. 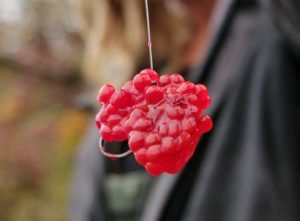 The Tidal Fraser River salmon fishery is not time dependent. Unlike river fishing, first light doesn’t always guarantee fish. In fact, most of my successful days occur while the sun is shining above. The Fraser River is often silty with visibility down to one foot, so sunlight can in fact work to your advantage by making your bait stand out more.

This fishery is heavily depended on tide. Fish usually travel upstream during the incoming tide, so bites can often be found as the tide comes up. As the tide peaks, bites often stop because the lack of upstream/tidal or downstream current doesn’t carry the scent of your roe. Once the tide begins to drop, fish often start biting as the scent from your roe is carried downstream. If you have to pick a time to fish, start from three hours before peak tide until three hours after. This six-hour window maximizes your chances. 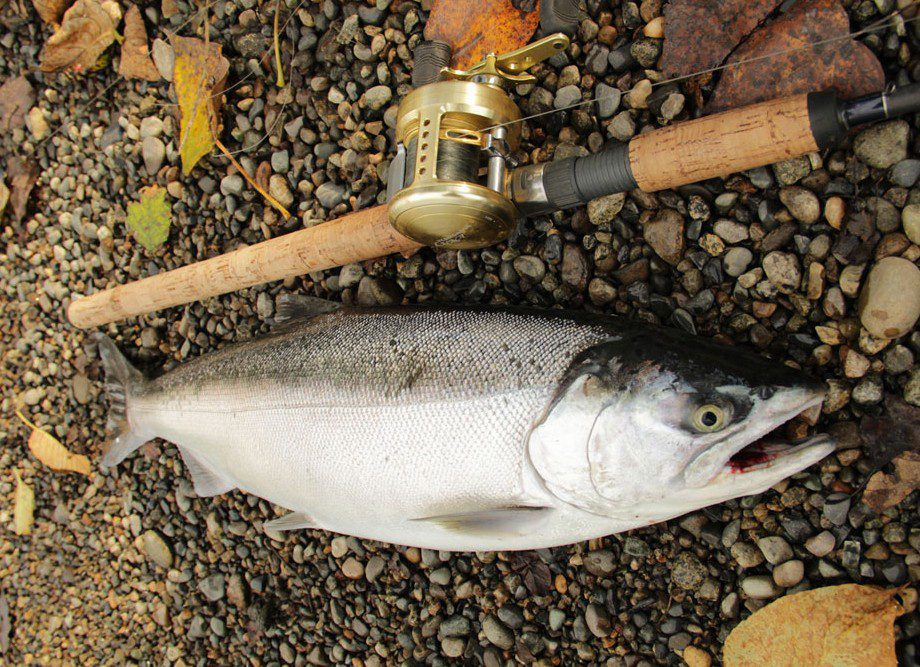 Majority of fall salmon are between 2lb and 15lb. I like to use a medium spinning or baitcasting rod rated between 8 and 15-pound. Your rod should be at least nine feet long. This allows you to see the rod tip better when it is in a holder. The shoreline along the Tidal Fraser River are also lined with rocks, log booms and pylons. A longer rod can get you out of some unwanted situations when fighting a fish.

I spool my reel with 20-pound braid, and I use 12-15 pound monofilament line as a leader. The silt found in the Fraser River can be very abrasive, so thicker lines are required to prevent it from snapping off. Depending on how strong the tidal current is, a weight between 2-4 ounce is more than adequate enough to hold your bait on the bottom. 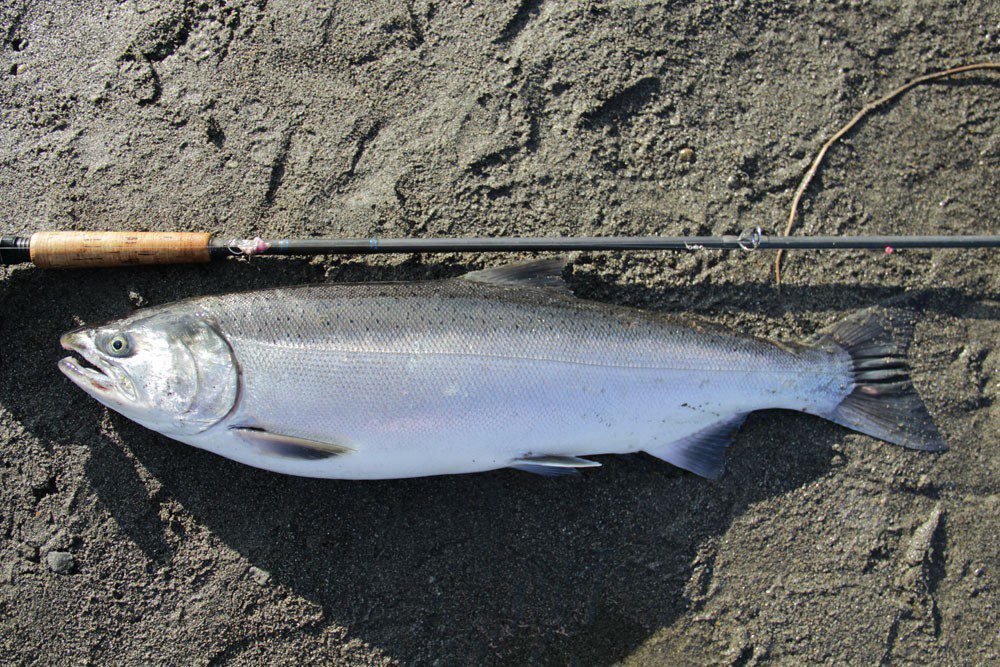 My preferred hook size is 1/0, which seems to hold the right amount of bait and keep the fish on better during the fight. While many people choose to use a spreader bar rig, my go-to terminal rig is simply a three-way swivel with one leader for the hook and the other for the weight. My leader for the hook is kept at one foot, while the weight leader is twice as long so the bait can be suspended slightly off the bottom.

The most common mistake that people make when fishing in the Tidal Fraser River is casting too far. Most of the fish, especially coho salmon, prefer travelling close to shore. By casting 30-50 feet out rather than 100 feet, this can yield many more bites. The line needs to be tightened slightly once your rig settles on the bottom. The tidal current usually keeps the tension of the line high so every bite will not be missed. 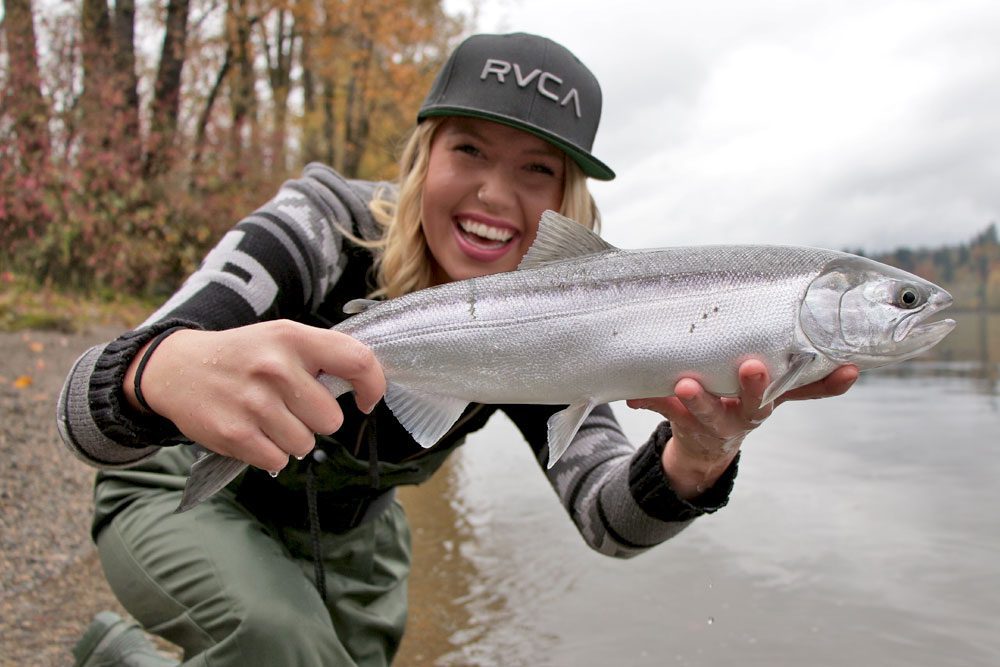 Salmon bites are not subtle. More often than not, they are abrupt takes and if one is not careful, the entire rod can fly off the holder. If bites are frequent, I like to downsize my bait so I can set the hook immediately instead of waiting for the fish to commit to the hook.

This fishery can be enjoyed by all ages due to the good shore access available along the entire river. On a weekend, families or friends often get together and set up multiple rods on the bank, socialize around a campfire while waiting for the bites. When schools of salmon travel by be prepared to run for the rods. Being rewarded with a nice silver salmon is an added bonus, which is not a rare sight throughout October and November. There really isn’t a better way to share your passion in fishing with others than the Tidal Fraser River fall salmon fishery. 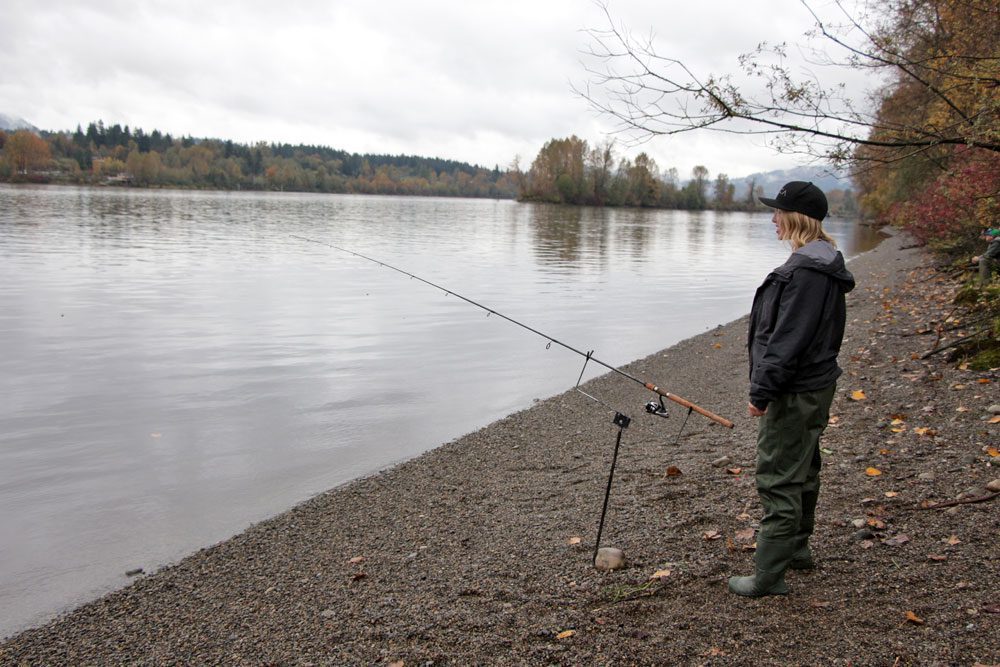 The Tidal Fraser River fall salmon fishery typically opens on the (Canadian) Thanksgiving weekend, but please be sure to check the exact opening date as it changes every year. This fishery peaks in late October but can remain productive until as late as early December. For regulations and opening dates, please see the following link:

Editor’s Note: Fishing with Rod is known in Western Canada for his online show, “Fishing with Rod.” His 450 videos have been viewed more than 12 million times and are part of the largest online YouTube video channel. To watch his videos please visithttps://www.youtube.com/user/fishingwithrod.