Whereas last year returns were poor this fall we’ve seen a large number of salmon in the Lower Smith River. Last year we had a few early big rains, which pulled the fish through the system faster and minimized the time we could target salmon. Fortunately, we haven’t had those early season big rains. Many of the salmon are hanging out in the estuary or still in the ocean. The weather has given us a few good weeks of fishing already.

There’s a lot of fish in the estuary right now. The big moon we have right now is bringing a lot of high tides and minus tides. This is normally when we get big pushes of salmon come in to the river, which has held true. The last few days we’ve seen a large influx of salmon on the tidal swings.

In addition river is solid fish right now. There’s 1,000 fish sitting at the water tower (which is closed to fishing). It’s one of the largest runs of salmon I’ve seen on this river. Keep in mind, however, we are currently in a flow closure above Rowdy Creek. You can fish from the mouth of the Smith River to the confluence of Rowdy Creek, which is roughly five miles (this could be lifted over the weekend if the forecast holds). 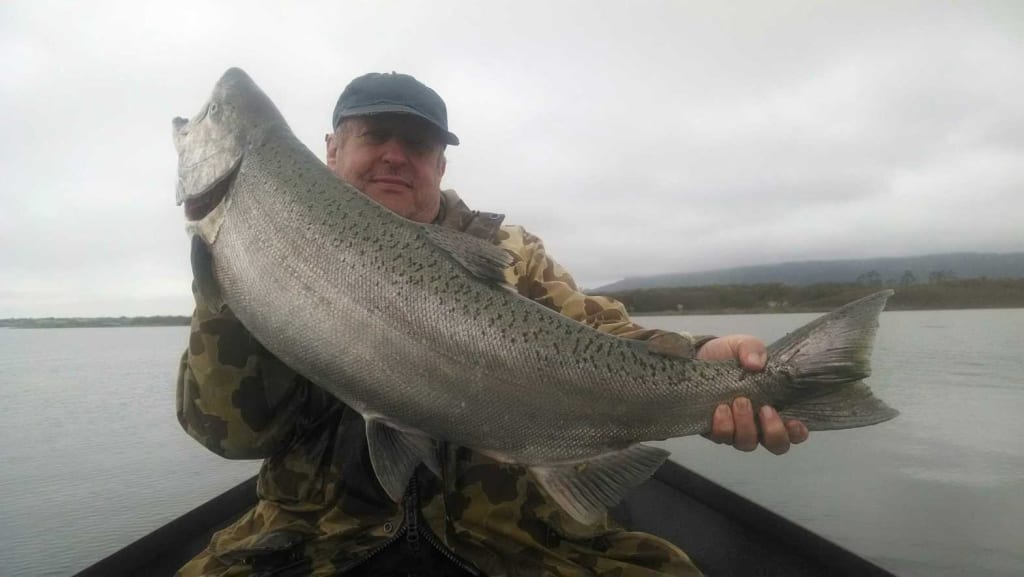 It seems like the run is enormous this year. I predicted a larger run last year than what we actually had, but it seems like we have a lot of holdover fish from last year that are entering the system this year due to the size and the numbers of fish. The size average is up this year.

We are already seeing salmon in the 30-40 pound range with some even larger. Normally, we don’t even see these larger fish until late in the season. There’s already been some larger than 50 pounds caught. There’s huge fish this year. My biggest is 40 so far. There’s got to be a massive amount of food in the ocean this year. 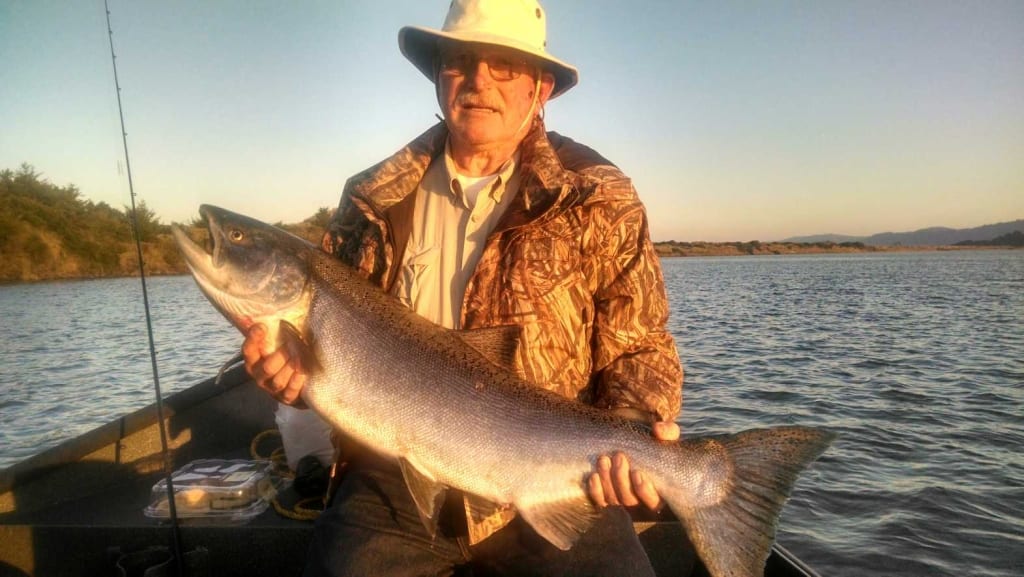 We are expecting a large storm Saturday through Monday, which if we get the three inches they are predicting, will likely lift the low flow closure and bring even more fish into the system. However, prior to that I’ll be fishing down in the estuary, which is primarily a trolling gig.

For the past few weeks we’ve been seeing success trolling anchovies, sardines and plug cut herring. I’ve been running all these baits brined in Chartreuse and Blue Fire Brine. It’s amazing. One day they’ll take the green and the next day they’ll take the blue. You have to have them both. 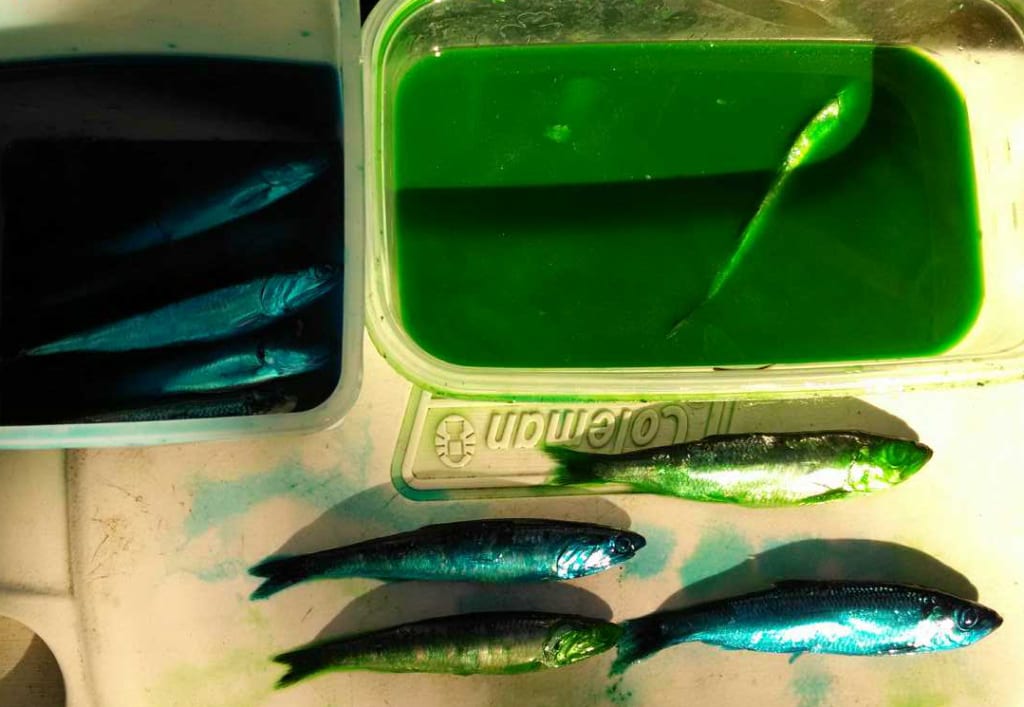 This fishery is simple. You are either trolling a plug cut herring or anchovy. The important part is maintaining a proper speed to get the bait to spin. The key is maintaining the spin on your bait. 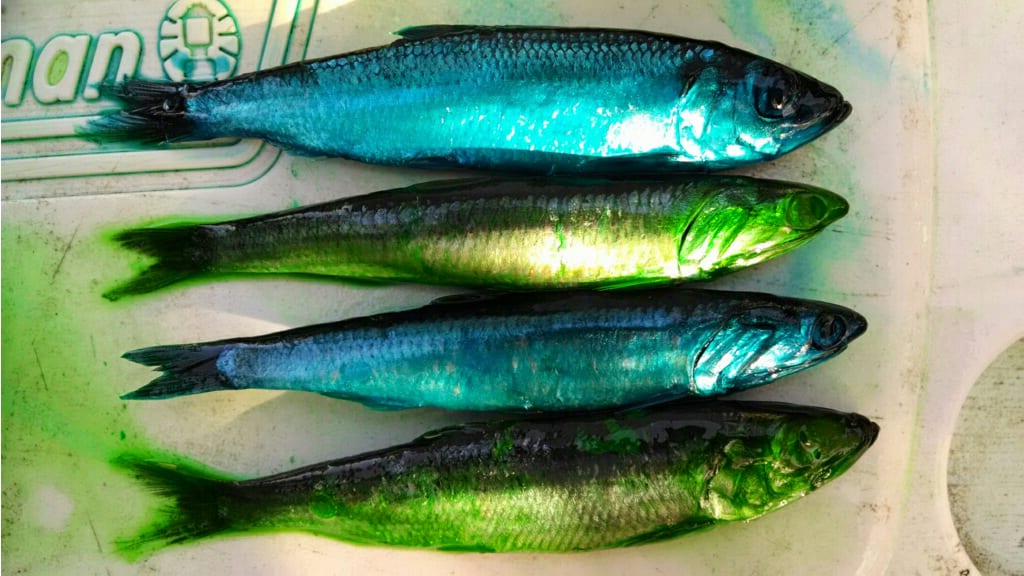 Editor’s Note: Anglers may keep one salmon per day, regardless of whether it’s hatchery or wild. No angler may exceed a bag limit of five wild salmon per season. Mick Thomas operates Lunker Fish Trips. For more information on his Smith River guided salmon outings please call 707-954-0352.