Some years the salmon run on the Manistee River is peaking about now. This isn’t one of those years. Our fall run hasn’t started yet. However, the next time we get a lot of rain and a north blow for a few days that should get these fish moving upriver. As it’s looking right now we’re having an Indian Summer. We’re still having a lot of success on salmon on Lake Michigan.

I’m still chartering on the big lake and catching chrome looking kings with eggs that aren’t mature yet. This is a sign that they aren’t ready to come in yet. I’m not a biologist, but it stands to reason that when the lake gets so cold like it has the past few weeks is slows the process up. It’s going to be tough fishing until October in the river.

I don’t think we are going to have a banner year on the Manistee, but I think we are going to have a late season run. The run is going to be at least as good as last year. The reason I say that is we are still catching four-year-olds that are very deep down. They haven’t broken the barrier yet where they start to acclimate to start to come up river. That could happen later this week or next week. 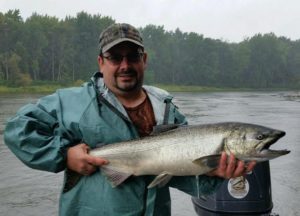 It’s tough fishing in the Manistee right now and where there is fish there’s a lot of pressure. If you get three fish in the river right now you are doing good. They haven’t made their way up yet. There’s a few in Manistee Lake, but the river doesn’t have many. I think at least 80 percent are in the lake still. There’s very few fish up at Tippy Dam yet. 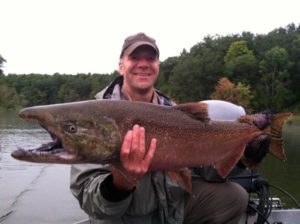 While a decent run can be expected when the weather cools this isn’t going to be a big fish year. My biggest fish this year was 23 pounds on the big lake. Two years ago my largest was 32. The feed is down in the lake so we aren’t seeing fish that are as large. Based on what we’ve been catching in Lake Michigan I’m expecting a 14 pound average. 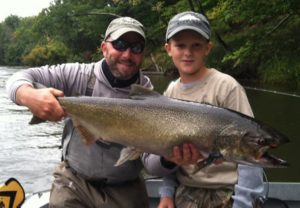 The water table on the lower end is higher than it has been in the last few years. I’d avoid fishing it. It’s better to migrate upriver roughly four miles where the water starts to slow down. There’s a ton of water down low and when you get the dam it looks like we’re in a drought. Find your way somewhere in the middle for the best conditions.

Speaking of conditions you have to have cloud cover for an all day bite. The kings don’t like it in the river when it’s bright out. You better be ready for the first hour and a half or late in the evening or expect slow action. On a cloudy day when the wind is blowing, days that I can’t be on Lake Michigan, is when you want to be on the river. A little ripple on the water does magic for fishing if the sun is out. 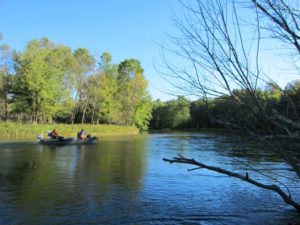 Targeting salmon on the Manistee is straightforward. What everybody does the first hour or two is throw Thundersticks, but I’d rather start with bait. I use skein all the way through salmon season. If we’ve had rain and the river is high and dark I’d run plugs, but that’s rare. And, you aren’t going to beat using the Pink Fire Cure on your skein. It’s what most guides and most people on the river use around here and that’s been the case for about five years now. Some guys use the Natural and the Orange, but the Pink Fire Cure has been my best. On the other hand, sometimes I’ll just use BorX O Fire cured eggs, too. I always have both on my boat. 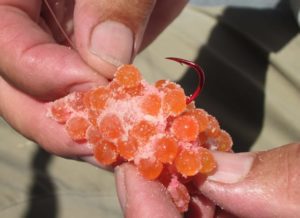 A lot of the mature kings have big teeth. To combat that I use a leader of 20-pound Trilene fluorocarbon and 15-pound Trilene mainline. If you use lighter line they’ll cut it off.

Editor’s Note: Guide Mark Chmura is in his 29th year of guiding the Manistee River in Northern Michigan. For more info on his guided trips with Pier Pressure Charters please call (231) 233-1579. 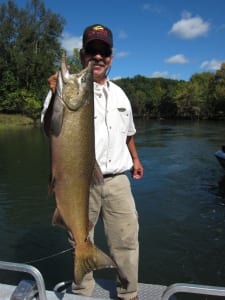