This season has been whacky. We’ve never had a split season like this where we are allowed to catch salmon for two weeks and then it’s shut down for two weeks. And, we only have 61 days total to chase salmon. It’s been weird. While it doesn’t bother the salmon we can’t keep our finger on the pulse because in two weeks they move quite a bit.

They are moving hourly. Not being able to target them for two weeks makes it difficult. Meanwhile, we are allowed to chase them through August 15 on this current open season. And, I’m expecting a good bite for the rest of the season. We’ve had limits daily by 9 am except for today. It’s been very good, but the salmon are getting beat on. There’s a lot of pressure up here. In fact, today there were 150 boats out there and a pile of boats in small area. 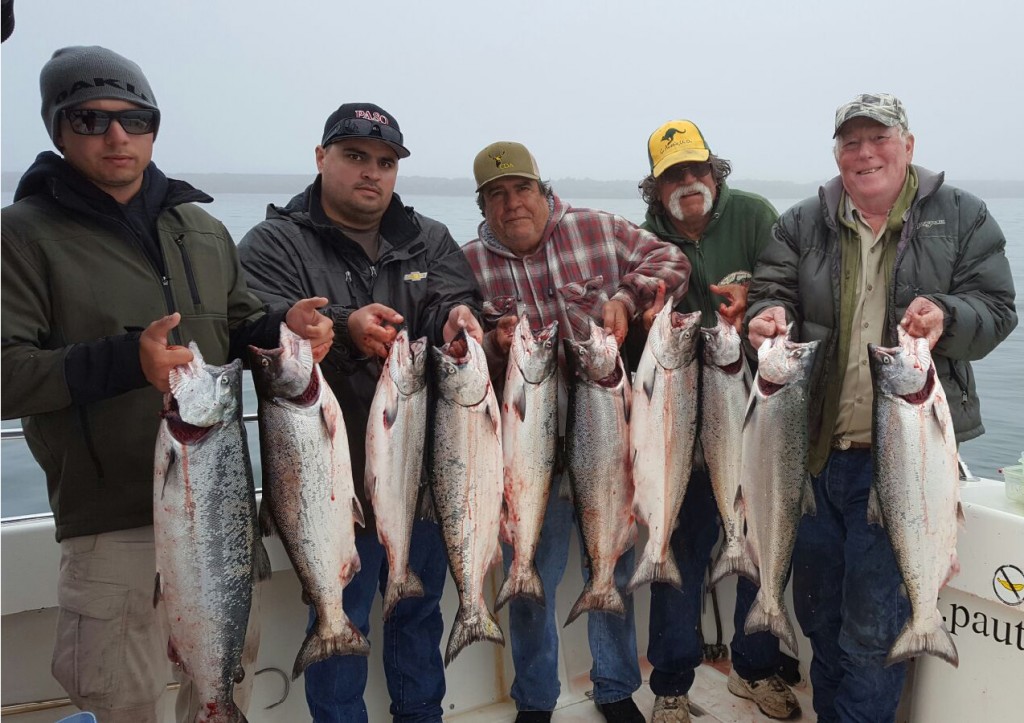 Ocean conditions are good, but things will get ever better when the wind blows. The wind will turn the water over and create the upwelling we need. That cools that water and brings nutrients back. Keep in mind, the bait comes back when the nutrients are rich. Don’t get me wrong the bait is here now. It hasn’t left. However, it’s been staying inside the bay and we want more bait on the outside.

There are scattered schools of salmon up and down the coast from Trinidad to the Golden Gate. Obviously, we’re staying within 20 miles of Eureka simply because that’s the port we leave out of. On the other hand, there’s plenty of fish off the North Coast.

Our methods haven’t changed. And, why would they if they are working so well? We’ve been doing the same thing with high catch rates for four years now. When we leave the harbor everyone can see what we are running. I have a container of Chartreuse Fire Brine anchovies sitting on the stern of my boat. Every charter can see it. But, it’s working, daily. With us there’s no secrets.

The only thing I’ve been doing different this year is mixing the Chartreuse Fire Dye with the Chartreuse Fire Brine. Honestly, if I want a glow stick I’ll mix the two. I’m weird about watercolor. There’s green, there’s light green, there’s see through green, there’s blue, there’s dark blue and brown. If the water is dark I like to put a glow stick on it and if it’s clear I prefer to go more natural, which explains when we mix in the Fire Dye for brighter bait. If you use the glow stuff in the clear water you’ll catch too many silvers and we can’t keep those.

While the fish started off smaller earlier in the season the quality has improved. We’re seeing a 13-14 pound average and many fish in the low and upper 20s. Generally, the larger fish come later in the season.