It’s been a good year for salmon fishing on the Pacific Ocean in the KMZ (Klamath Management Zone). There haven’t been a lot of large, model salmon around, but we’ve caught large numbers of them. We’ve had constant action on undersize salmon, which means our future seasons should be excellent. This has been the case all up and down California’s coast. There’s a lot of fish in the ocean right now, which is great.

To be honest the size of the fish this year hasn’t been impressive, but we are excited to see it. These are our future stock. This summer we’ve caught an endless amount of 12-20 inch salmon, which are about one-to-four pounds. We’ve been using 10 trays of anchovies a day, so 120 baits, which should tell you how many fish we’ve been catching. Action has been easy to find, but quality has been tough to attain some days.

That’s not to say that larger salmon aren’t around. On a normal day half of the fish we catch are six to eight pounds (with the occasional 15) and the rest are smaller ones. I expect the larger salmon to show up in late August as they prepare to go up our rivers. These salmon around are going up the Eel, Mad, Klamath and even the Sacramento River. Salmon heading up many rivers mill around and cruise this section of the coast to feed on bait and then head upriver.

Recently, we’ve had tons of bait show up. The ocean is loaded with krill and anchovies, which means these salmon should stick around a while. The salmon follow the feed. Generally, when there’s bait here the salmon stick around. With that said, I’ll be doing the same thing I always do to target salmon: troll Chartreuse Fire Brine/Fire Dye anchovies. All of our salmon this season has come on the chartreuse anchovies. Every other boat that fishes out of Eureka knows that’s all we use. 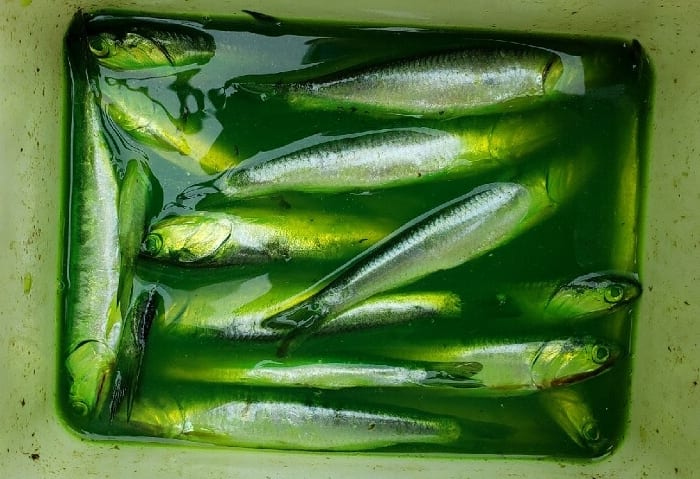 There’s a 10-mile line of salmon off Eureka and many boats target them daily. This summer we’ve had to drop our downriggers 200 feet to get into them, which isn’t normal. This is because we have warm water here now. The warmer water pushes the salmon deeper. They’ll probably stay deep this time of year until they migrate upriver. Salmon will be in this area through the closure.

Special Note: Salmon season is open in KMZ through Sept 3. Anglers are allowed two salmon 20-inches and larger per day.