We’ve been expecting an enormous run of pink salmon in the North Puget Sound. In fact, more than six million are expected to return. Our pink run on the Snohomish River opened on Sunday and it’s been very good since the minute it did. Action is already incredible and the numbers of pinks are building daily. It’s Alaska style up here.

The pink fishing is retarded right now. It’s better than trout fishing in a stocked trout pond. There’s 1.6 millions pinks scheduled to come back to the Snohomish River and many of them are already here. There’s times that it looks like the bottom of the river is moving there’s many fish. This is a decent size river, but it’s not that big so when you see this many salmon swimming in it – it’ insane. It’s a fun local fishery with an endless amount of action.

One of the great things about pink salmon is you don’t have to be a veteran angler to catch them. It’s go time. It’s drop what you’re doing and go out there and catch fish. You aren’t going to out there to catch one; you are going out there to catch several fish every day with relative ease. 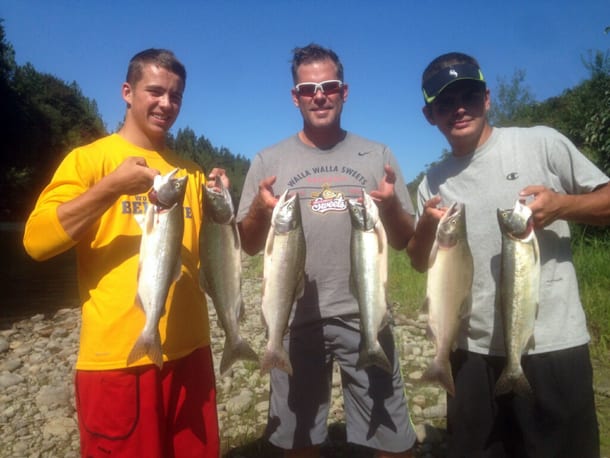 The key is finding the deeper holes where the pinks are and getting your presentation in there. If you are fishing slow moving water a bobber with a jig that’s tipped with a Pink Fire Brine shrimp is dynamite. That’s one of four things we are using. Normally, we twitch jigs or throw Dick Nite spoons, but my guys get so tired of twitching, casting and catching we mix it up by throwing a bobber and jig. If my guys don’t catch a fish every three casts I start making fun of them because these fish are that easy to catch.

Keep in mind, pink season just opened. They are just starting to come in now and they will be in good shape through middle of September. Then you are going to have to start weeding through the ones that are turning and there will be less fresh fish available. Fortunately, when the pinks slow down the silver turn on.

With more than one million fish it almost doesn’t matter where you fish. They are everywhere. However, as of right now you have to fish from the confluence of where the Snowqualmie and Skykomish meet down to the saltwater, roughly 20 miles of water, all of which has plenty of pinks in it now. If you go to your favorite spot and there’s no fish there wait 15 minutes and some will show up. There’s that many around. 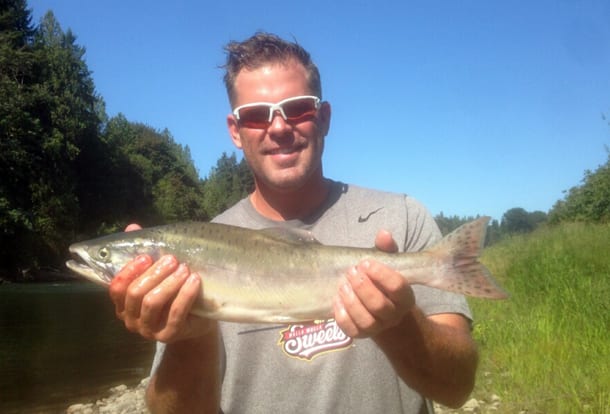 When chasing pinks I use 8-10 pound leader line (Izorline) and size 1 50/50 and Frog Dick Nite spoons. We also do a lot of twitching jigs. Anything that’s pink and generally speaking 3/8 to ½ ounce works best. As mentioned previously, the bobber and jig tipped with shrimp is something we turn to for a break from constant casting, retrieving and twitching. It’s a fun way to catch fish. Also, in the lower tidal section guys plunk sand shrimp with Spin N Glo. 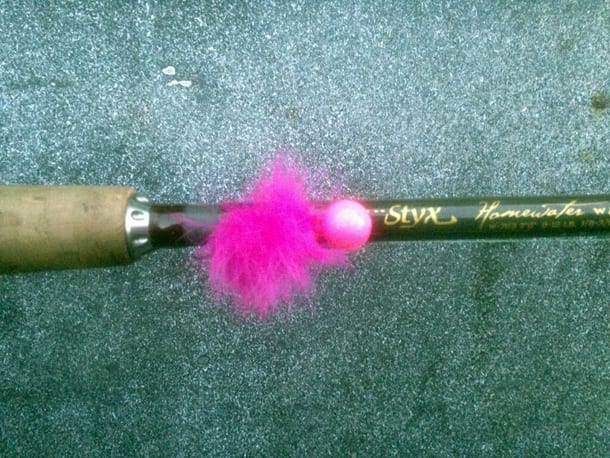 While we use cured eggs to catch the coho coming in a few weeks, we don’t use them to catch pinks. The beauty of catching pinks is we are going to use the eggs from these fish to catch coho that are coming on their heels. And, those coho are big egg biters.

Curing pink egg is different than steelhead, coho and king salmon eggs. Pink are more delicate because the cell membrane is thinner than other salmon eggs. You have to take more care of them. So what we are going to do is bleed the fish right away and it’s imperative to cure them within 24 hours. Because I’m going to use them for salmon Pink and Red Fire Cure are best. However, don’t go too heavy on the cure. I’m also going to add a tablespoon of salt sand Natural BorX O Fire during the process to cure them up.